One of Long Beach’s most luxurious gated communities may lose its gates because it was supposed to include a public walkway that was never built.

Now, 44 years after the Bay Harbour neighborhood near Marina Pacifica won approval, the state agency tasked with ensuring public access through the development is trying to get the walkways built.

Homeowners aren’t happy about it—especially since many moved there because of its gates. What’s more, three tennis courts and two swimming pools sit on land that was supposed to be designated for public access.

There are about 200 homes in Bay Harbour, located between Pacific Coast Highway and the Los Cerritos Channel. First approved in the late 1970s, the neighborhood has long been advertised as a leader in exclusive, gated luxury.

Coastal Commission spokeswoman Noaki Schwartz confirmed that the commission is carrying out an “enforcement action” regarding public access at Bay Harbour but wouldn’t comment further.

Residents are similarly tight-lipped. David Thornburg, president of the Bay Harbour Homeowners Association, didn’t return two calls and an email requesting comment. Another resident who was familiar with the matter requested anonymity because he wasn’t part of the HOA leadership.

“The HOA is dealing with several land use attorneys,” the resident said. “A lot of neighbors are concerned because this gated community has been here for 40-some years and all of a sudden they’re going to open our gates.”

Joel Gerwein, a project manager with the California Coastal Conservancy—which accepted oversight of the public access easement back in 1978 and was tasked with ensuring its construction—said the agency didn’t discover that the pathway hadn’t actually been built until 2019.

“This was a very old easement and we don’t have a record of it being monitored previously,” Gerwein said. “We embarked on a comprehensive monitoring program a few years ago and have since monitored all of our property interests in the South Coast; this is the only one that wasn’t in compliance.”

Gerwein said the Conservancy employs just 60 people, mostly in the agency’s Oakland office. None work in enforcement, he added.

Mel Nutter, who sat on the Coastal Commission around the time of the Bay Harbour approval (then known as Costa del Sol), said he wasn’t surprised that the public pathways the commission had mandated weren’t built.

“If no one is keeping an eye on things, that can very well happen,” he said.

Jennifer Savage, the California Policy Manager for the Surfrider Foundation, which has long worked to ensure public access to the state’s shoreline, also wasn’t surprised to hear that the easement never went in.

“We see this all the time,” she said, noting that increasingly expensive residential development is taking place at the coast. “In fact, the opportunity to exclude [the public] really has only grown.”

Since its founding in 1972, a key mission of the California Coastal Commission has been to maximize public access to and along the shoreline.

Gerwein said the Conservancy is currently working with the Coastal Commission and Bay Harbour “to find a solution that provides for public access and is agreeable to everyone.”

City officials are limited in what they can do in regard to the public access issues within Bay Harbour, but said they’re working with the HOA on “minor, small enhancements” that can be made around the community and at nearby Jack Nichol Park to ensure better public access, said Maryanne Cronin, a coastal planner with the city.

These enhancements include new signage at the park and on roads just outside Bay Harbour as well as additional seating, recycling and trash receptacles and drinking fountains. Cronin also said it would be “very easy” to remove a small 3-foot gate that currently sits between the park and an already existing public path that runs between Bay Harbour and a small marina.

Christopher Koontz, the city’s Development Services deputy director, said officials haven’t worked out either the costs of these enhancements or an agreement with the Bay Harbour HOA as to who would pay for what. 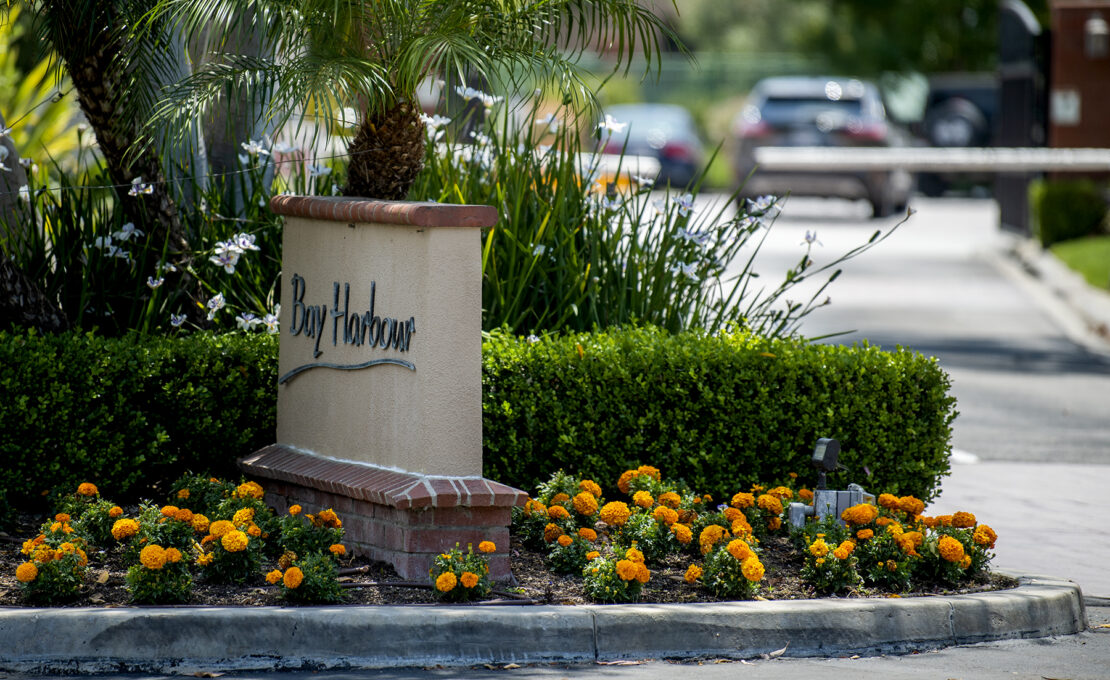 A resident passes the main security gate at Bay Harbour luxury home community in Long Beach Tuesday, June 22, 2021. Forty-four years ago the Coastal Commission approved the community, but with the condition that it includes public access pathways through it to a nearby park and the Los Cerritos Channel. Photo by Thomas R. Cordova.

The development of Costa del Sol was complicated and time-consuming. Originally put forth in 1973, the community went through multiple design changes as it sought approval from the Coastal Commission.

Then in 1976, two architects who designed the neighborhood and five other projects in the city told authorities that then-Long Beach Planning Director Ernest Mayer Jr. was shaking them down for money in exchange for moving projects through.

In May of that year, District Attorney investigators arrested Mayer minutes after he accepted a box full of Mexican gold coins valued at more than $25,000. A year later he was found guilty after soliciting more than $50,000 in bribes (about $240,000 in today’s dollars), and sentenced to one to 14 years in prison.

Because the development was in the coastal zone, Costa Del Sol was one of the earliest projects to seek approval from the Coastal Commission. Originally envisioned as a neighborhood of 918 houses, successive commission rejections pared the final design down to fewer than 200 homes.

The commission finally narrowly approved the project in 1977, but it imposed six conditions. The fourth required that a public easement traverse the “greenbelt” of grass and trees that ran through the development like a plus-sign.

“Prior to commencement of the construction the applicants shall record easements in favor of the public for pedestrian and bicycle access throughout the greenbelt,” states the Coastal Commission’s final staff recommendation, which the panel approved on Feb. 16, 1977 in a 7-3 vote.

State law required a government agency or nonprofit like a land use trust to accept the easement. Doing so ensures that the easement “remains in the public domain in perpetuity; it can not revert back to private ownership,” states the Coastal Commission’s 1999 Public Access Action Plan.

Land use documents show the Costa del Sol developer first attempted to get the city’s Department of Parks and Recreation to accept the easement, but the city refused, saying easements required by the Coastal Commission were “beyond its scope.”

The Costa del Sol developer then went to the California Coastal Conservancy, which accepted the easement, Conservancy records show. The Grant of Easement, signed Sept. 27, 1978, states that public access was to be in the form of 10-foot-wide pathways through the property that would allow pedestrian and bicycle traffic to move through the neighborhood to both Jack Nichol Park and the Los Cerritos Channel.

While the recorded easement mandated that Costa del Sol provide public access as described in the easement document, the Conservancy, as the body that ultimately accepted the easement, should still make sure the title owner is in compliance, Gerwein said.

But that didn’t happen until 2019. As a result, wrought iron gates went up around Costa del Sol soon after construction began.

By the early 1980s, Costa del Sol was running ads promoting its “exclusive” location and touting itself as a “proud addition” to the city. One Oct. 2, 1983 ad in the Los Angeles Times boasted of its “gate-guarded entrance.”

Another advertising supplement that ran in the Times three weeks later quoted George Economides, then executive vice president of the Long Beach Chamber of Commerce, as saying Costa del Sol filled a real need in the city because, “The lack of new luxury housing in the past hindered the relocation of many top corporations to Long Beach because the city did not provide homes that accommodate the upper echelon.”

Warmington Homes rebranded the neighborhood as “Bay Harbour” in 1986, advertising both its “elegant ‘Old World’ European ambiance” and commitment to filling homes with “the most modern amenities,” according to a July 26, 1986 advertising supplement in the Times.

By now the greenbelt, which the Coastal Commission had less than a decade earlier mandated as a public access easement, was now just another luxury feature of the neighborhood, and home to three tennis courts and two swimming pools.

As for what happens next, Koontz said the city is trying to work with all the parties to get this fixed.

“We share the Coastal Commission’s goal of access to parks and the coast,” he said. He added that they’re not yet at a “perfect agreement” with the commission, but negotiations are continuing.