Park Estates, an enclave of more than 1,300 mostly high-dollar houses west of Cal State Long Beach, was built as the jewel of East Long Beach by developer Lloyd Whaley, who built his own mansion, designed in part by Paul Revere Williams, there in 1949.

Soon, other major names in architecture were drawn to the area, where mature trees and large lots allowed them to bring their design dreams to life. Today, the area is a strollable residential hall of fame of great architecture, with offerings by some of the most respected local, semi-local and national architects, including Paul Tay, Richard Neutra, Ed Killingsworth and Kenneth S. Wing.

But what may be the most remarkable house in all the estates is the Alexander House, designed by world-renowned architect John Lautner, a protege of and frequent assistant of Frank Lloyd Wright.

The elegant and pristine example of the Mid Century Modern home towers over most works in the increasingly popular style in Long Beach. It’s what Cliff May homes dream about on a good night.

The home was built in 1951—smack dab in the mid part of the century—for Long Beach dentist George A. Alexander and his family, who lived in the home for 66 years before selling it in 2018 for a million and a half dollars. And it’s once again on the market, listed by Janel Winston and Ginette Skelton  $2.95 million.

It’s an ambitious asking price, but it’s not an untoward ambition, because it can be fairly easily argued that the home at 5281 E. El Roble St. is high on the list of the city’s most beautiful homes. Perhaps Wright’s greatest influence on his student Lautner was instilling an appreciation for Organic architecture—a style that’s best suited for building in wild natural settings like mountains and forests, because its chief effect is to  promote the integration of the natural world with human habitation. 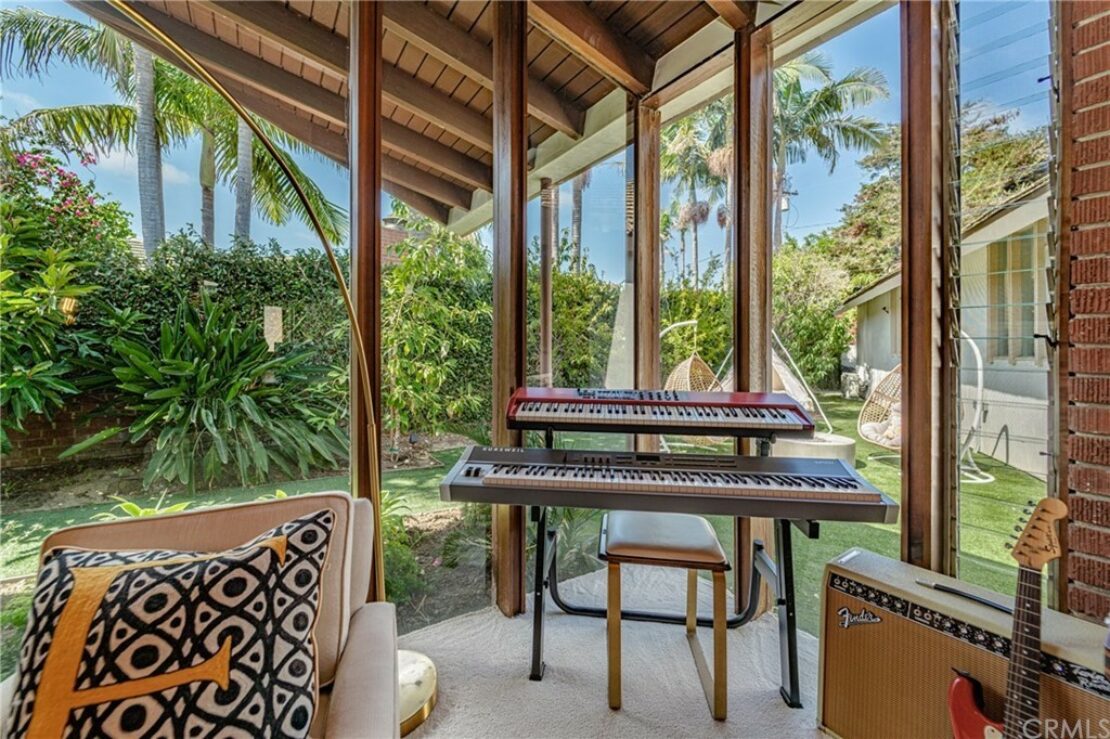 Floor-to-ceiling glass walls and windows bring the outside into the rooms. Photo courtesy Janel Winston.

But Lautner has brought the style elegantly to the city with the Alexander House, where it can occasionally be confusing whether you’re indoors or outdoors, with its abundance of floor-to-ceiling glass peering out into lush and well maintained landscaping. I can see myself crashing into glass walls for a few weeks until I managed to get the place figured out.

Even the hallways, rarely the hallmark of architecture, are beautifully designed, again with one wall of glass looking out to the foliage giving you the impression that you’re strolling through a park rather than just heading toward your bedroom. 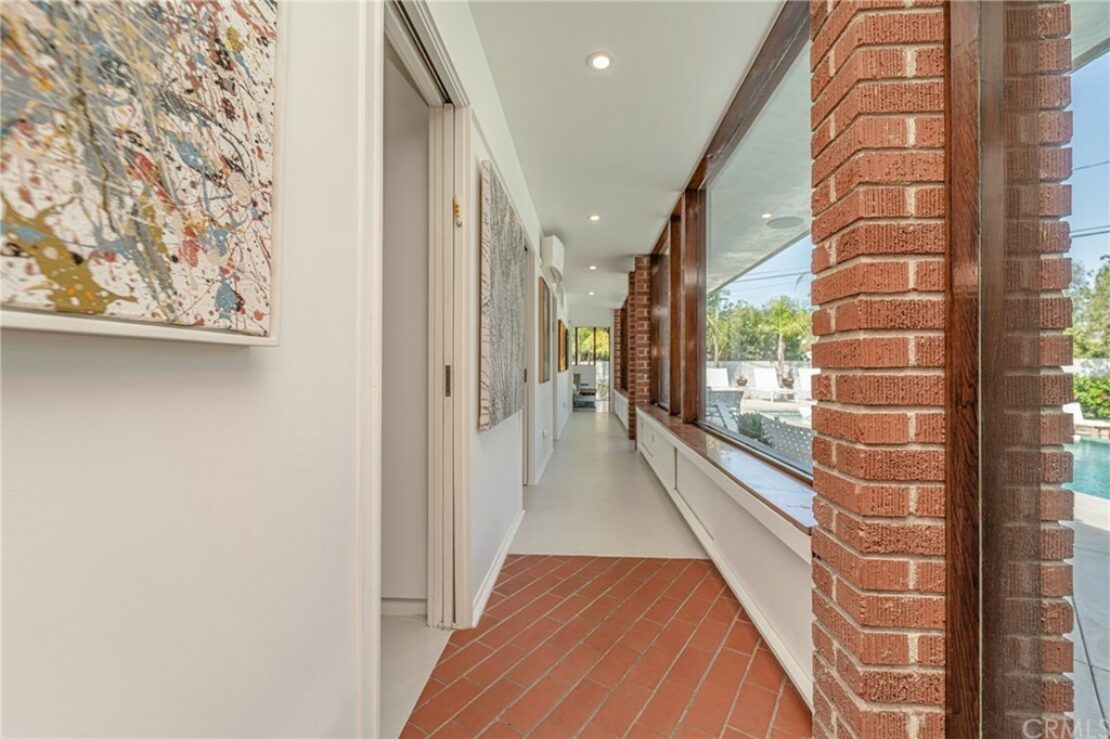 A hallway along an exterior window. Photo courtesy Janel Winston.

The four-bed, four-bath 2,886-square-foot ranch-style home, with its low-slung horizontal lines, fairly prowls across its .31-acre lot. You’ll find the front door tucked behind a privacy wall that stretches along most of the front of the house.

Inside, things quickly turn spectacular, with a step-down living room set amid brick, wood and, yes, glass. The soaring vaulted ceiling is tongue-and-groove wood beam and the open floor plan brings the kitchen together with the living room and family room. 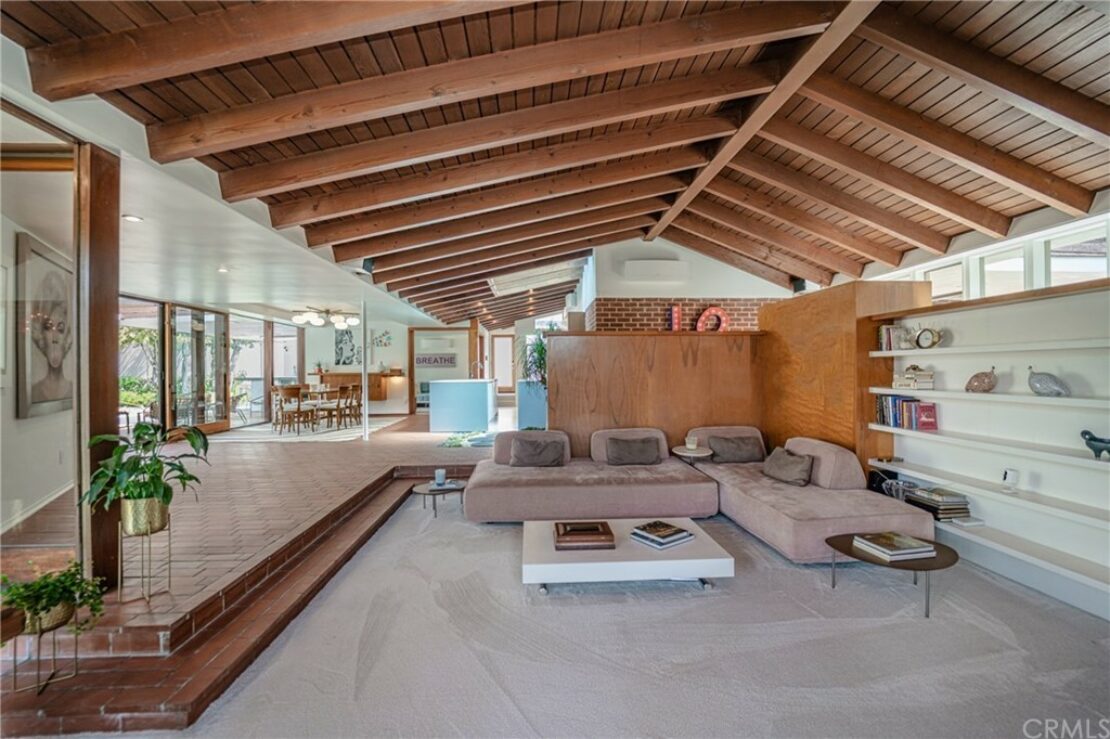 In the backyard, a massive overhang shades the poolside patio along the entire length of the house.

Although Lautner has designed several world-class modern homes in the Los Angeles area and in Palm Springs (where he designed a 25,000-square-foot villa for Bob and Dolores Hope in 1973), the Alexander House is thought to be the only Lautner-designed house in the city. Drop me a line if that’s wrong.

Several books have been devoted to Lautner’s works and he’s the subject of a documentary, “Infinite Space.” Swing by USModernist.com  to learn more about the architect and to see some of his designs.

A home at the peak of Park Estates for sale at $3.7 million