For eight seasons, the macabre Showtime series “Dexter” brought regular and dependable film-permit money to Long Beach. The city was the stand-in for Miami and other Floridian environments for the show about a professional blood-splatter expert and a hobbyist blood-splatter producer.

Long Beach appeared so frequently in the show that it was distracting for locals. That’s not a house in Florida; it’s over on San Anseline Avenue by St. Cornelius. Those aren’t the Everglades; that’s the El Dorado Nature Center.

“Dexter” ended after its eighth season in 2013, but Showtime recently announced it would bring the show back with eight new episodes and for a moment, it looked like an opportunity for Long Beach to rack up some more sweet, sweet cash from Hollywood.

But viewers of the show’s final episode will recall that the show’s eponymous main character wound up as a lumberjack in Alaska, and while it may be interesting to see what Dexter Morgan can do with a professional-grade chainsaw and ax, the setting is too much of a stretch for Long Beach to play.

But the city has been a film-location hot spot long before “Dexter,” and it will continue to be one long after. No TV series is indispensable to a city that’s hosted hundreds of TV series episodes and hundreds of feature films and thousands of television commercials.

Like virtually every facet of the human experience, filming in Long Beach, or any other city that’s come to rely on the occasional check from showbiz to supplement its budget, has been hit hard  and shut down by the coronavirus. Location filming in Long Beach went dim, if not dark, for a bit of February, and continued through March, April, May, and half of June, before cameras slowly started rolling again. About a quarter of the year was tossed onto the cutting room floor.

And while some quick ads were shot in Long Beach in early summer, things are slowly returning to, if not pre-COVID level, then at least to bringing a bit of walking-around money to the department in charge of bringing in money from film work and special events in the city, which has been further crippled by the ongoing cancellation of any sort of event that involves a gathering of more than a handful of people.

“Things are starting back up now in terms of filming,” said Tasha Day, manager of Special Events and Filming in Long Beach. “We’ve had a bunch of commercials since the governor eased restrictions in June.”

Among the companies using Long Beach as a backdrop since June, according to Day, are Hyundai and Honda, both on West Broadway and Maine Avenue by the 710 Freeway, and at the nearby courthouse; Volkswagen at some residences on First Street in Bluff Park and on Broadway at Linden Avenue; McDonald’s at Drake Park and Junipero Beach; a Ford commercial on The Promenade; and Infiniti at the Civic Center Plaza.

And TV shows are inching back into town as well. “Bosch,” a longtime local staple, was at Community Hospital. The AppleTV+ sci-fi series “For All Mankind,” based on the idea that the space race between Russia and the U.S. had never ended, spent some time at the Boeing hangar, Day said. Also filming here in the post-COVID era was the sports drama “All American” taking advantage of the currently vacant Community Hospital, and the USA network’s “Straight Up With Steve Austin,” in which the WWE legend chats with other sports stars, filmed at Alamitos and Granada beaches.

And “Goliath” is coming back for a fourth season, she said. The Amazon Prime series featuring Billy Bob Thornton makes use of Long Beach in several shots for the show, set mainly in Santa Monica. Also coming back to town soon will be the cast and crew for the 12th season of CBS’s “NCIS: Los Angeles,” a series that’s spent a lot of money in Long Beach over its run. Most recently, “Lucifer,” the urban fantasy crime series that was dumped by Fox and renewed by Netflix, filmed at Downtown’s Hamburger Mary’s on Oct. 21.

With the Long Beach Convention and Entertainment Center still virtually shut down, the complex has been cashing in on Hollywood as well. In happier times, the place was generally pretty busy with filming, and now it’s picked up a couple of projects that remain under wraps with non-disclosure agreements signed, said the facility’s general manager Charlie Beirne. One thing that’s known is that one of the projects is a Netflix comedy special filmed at the Terrace Theater plaza, though the talent’s names are being kept quiet. 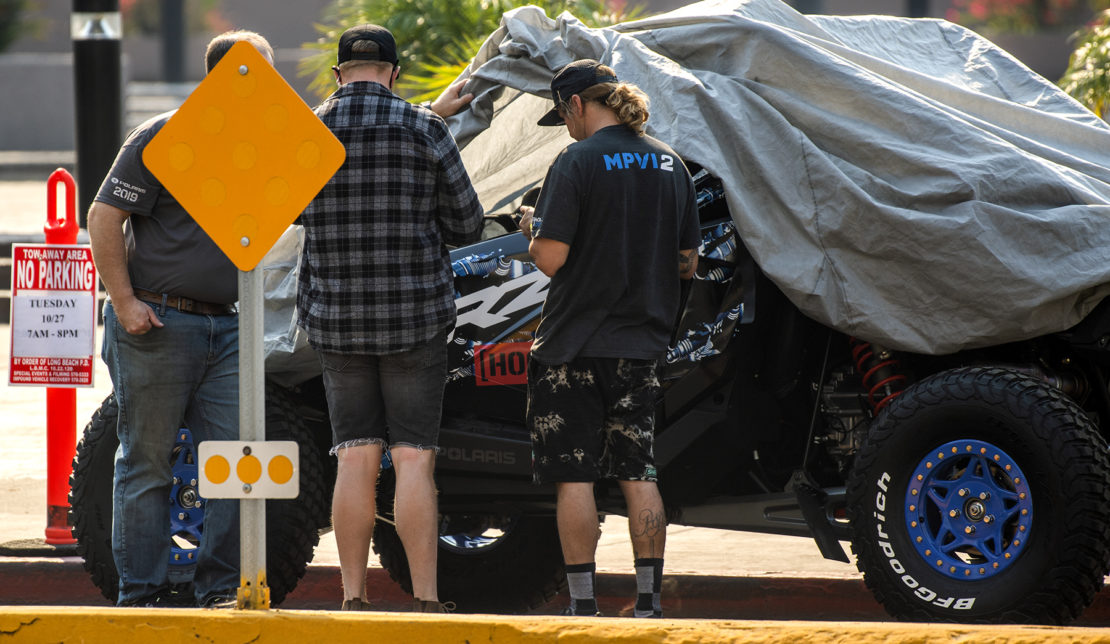 Film crews keep a Polaris off-road vehicle under wraps as they prepare to film a commercial for the off-road motor company in front of the Terrace Theater in Long Beach Tuesday, October 27, 2020. Photo by Thomas R. Cordova.

Additionally, the center’s acres of unused parking areas have been getting work as a site for filmers’ base camps, which, because of COVID restrictions, can no longer be set up in public areas.

All film crews now bring along their own COVID compliance officer to make sure that everything is done safely.

“When they were filming the comedy special we all got tested for COVID twice a day,” said Beirne. “Anyone who came near the place was tested. The compliance officers are extremely safe and proactive in how everything is handled.

Day, of the special events department, said when film companies apply for a permit, they have to submit COVID prevention plans that go to the city’s Health Department for approval. Companies also must sign a COVID form, which includes the usual precautions as well as such things as setting up handwashing facilities with running water, soap and paper towels, strategically placing hand-sanitizer stations around the work area and sanitizing locations with EPA-registered disinfectant methods after film work is completed.

Filming fees begin with a $368 application and a permit fee of $525 per day, and there are other expenses for staff monitoring and revisions. Location fees depend on the site. Private businesses and homeowners can negotiate with the production companies, while renting public areas vary. It’s $815 per day for Marina Green, the Rainbow Lagoon or Shoreline Park, to $5,100 a day for Shoreline Drive, a popular and rare spot for freeway sequences.

Although filming in Long Beach goes back to the silent-picture days of 1913 when Balboa Studios opened a mammoth lot at Alamitos Avenue and Sixth Street, the city’s popularity with Hollywood really took off in the mid 1970s with frequent visits by the cast and crew from ABC’s “Matt Huston” and NBC’s “CHiPs.” The latter show made extensive use of the long and scenic stretches of Shoreline and Queensway drives, according to John Robinson, who has worked in the city’s filming office before starting his own Long Beach Locations business, which pairs residences and businesses in Long Beach with the needs of TV, movie and commercial production companies.

Long Beach is a favorite location for movies, TV and commercials for a variety of reasons. “The city can look like so many different places,” said Robinson. “Its homes and neighborhoods go from traditional to beach, to mid-America to palm trees. So many homes here could be in Indiana or Ohio.”

Long Beach also has the advantage of being within Los Angeles’ TMZ (Thirty Mile Zone). Film-related unions use this zone to determine their workers’ pay scale and whether hotel lodging is required for workers. Expenses balloon outside the TMZ, which radiates from the intersection of Beverly and La Cienega boulevards—about where the Beverly Center is located.

Most importantly, filming experts agree, is the cooperation and film-friendliness of the city and Tasha Day and her Long Beach’s Filming and Special Events office.

“The infrastructure for filming in Long Beach is unparalleled, from the film office to the fire abnd police departments,” said Robinson. “They all try to make each shoot a successful one.”

Also, from the time a location manager makes a call to [Day] and says where they want to shoot, it takes about three days to get permitted, while other cities it can take up to 10 days, and time is money.”