Dozens of grocery workers were joined by city leaders and union representatives at a North Long Beach Food 4 Less to condemn the recent announcement by The Kroger Co. that it would close two stores in the city.

Speakers during the press conference called on the national grocery giant to reverse its decision and keep stores open.

“It’s devastating,” said Robert Gonzalez who has worked for the company for 26 years, adding that the store has a history of feeding the elderly and homeless. “After all the work I’ve done to feed the needy families. This is so wrong and evil.”

On Monday, Kroger announced the closure of the South Street Food 4 Less and the Ralphs at the intersection of Los Coyotes Diagonal and Wardlow Road as a direct response to the city’s recently approved “hero pay” mandate, which requires larger grocers to pay employees an additional $4 per hour for 120 days. The company said the ordinance placed additional financial pressure on already struggling stores, which is forcing the April 17 closures.

In response to Wednesday’s press conference, Krogers Ralphs and Food 4 Less divisions released a joint statement again calling the city mandate a “misguided action,” adding the “irreparable harm” facing employees and the surrounding communities is a “direct result of the [city’s] attempt to pick winners and losers.”

“We are truly saddened that our associates and customers will ultimately be the real victims of these forced closures because of the city council’s actions,” the statement reads, also noting that Kroger has invested $1.3 billion for associates and for increased safety measures. 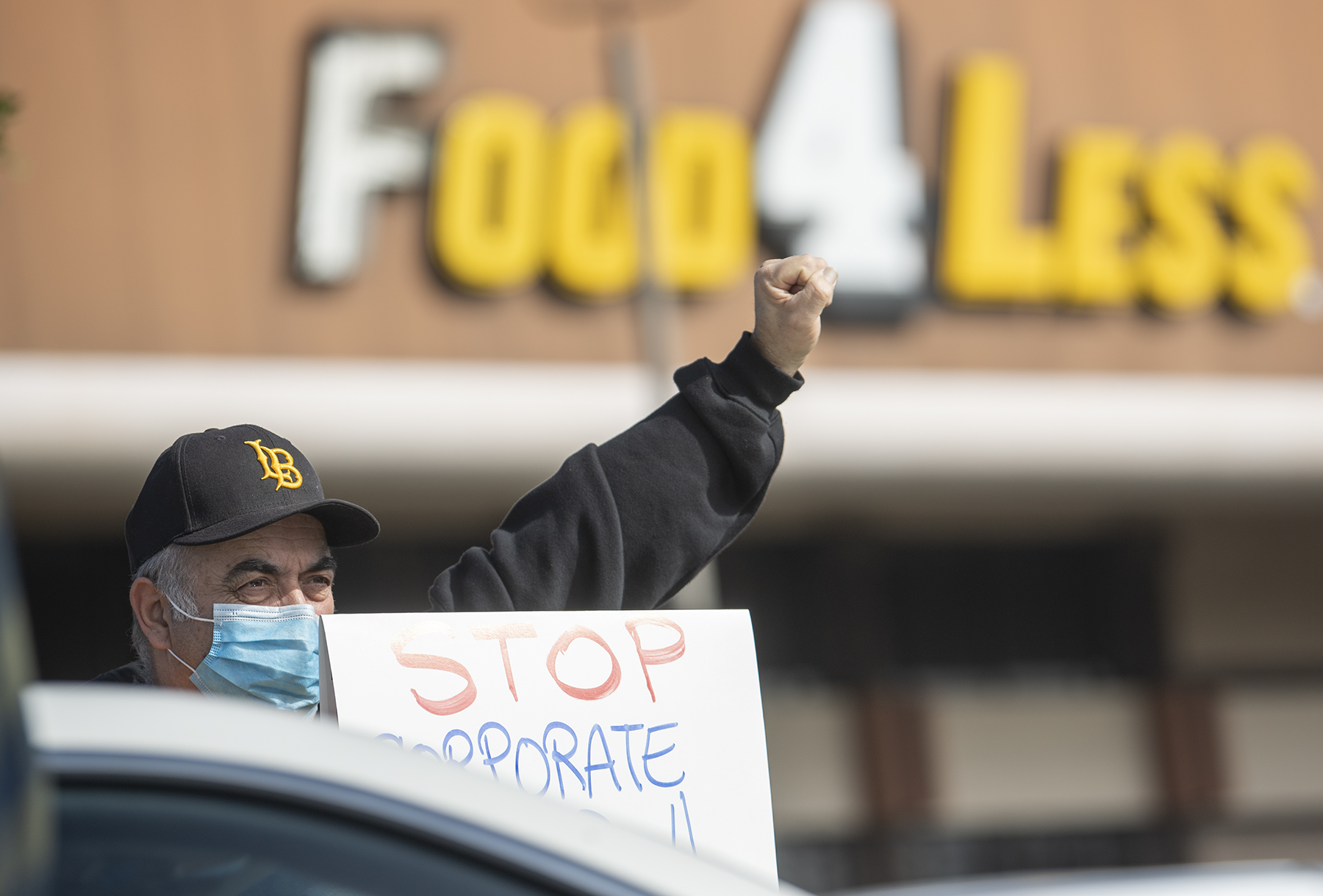 Howard Simmons, who has been a Ralphs supermarket employee for 40 years protests in front of a Food 4 Less as Long Beach city leaders and community advocates call on Kroger Co. to keep two of its stores open in Long Beach Wednesday, February 3, 2021. The city leaders condemn the company’s actions to close two neighborhood grocery stores over the $4 in temporary hazard pay wages. Photo by Thomas R. Cordova

The company said total compensation for its Long Beach employees averages $24 per hour when including medical and pension.

Proponents of the extra pay for workers also cite Kroger’s 2020 profits as proof that the company can easily afford to temporarily increase pay for its employees on the frontlines of a pandemic. Kroger reported over $2.6 billion in profits during the last three quarters of 2020, according to an analysis by the Brookings Institute, a Washington D.C.-based think tank.

“What we are witnessing right now is shameful. Long Beach will continue to stand with workers during this pandemic,” said Mayor Robert Garcia, who attended Wednesday’s press conference. “This ‘hero pay’ is … to support the hardworking men and women that are in all our grocery stores across the city.”

The Los Angeles City Council Tuesday voted to support a $5 “hero pay” initiative, and in January the Los Angeles County Board of Supervisors approved a similar mandate be drafted for the county. Numerous other cities have approved or are considering “hero pay,” including Seattle, Santa Monica and Oakland.

Meanwhile, in response to multiple city and county actions related to “hero pay,” Monrovia-based Trader Joe’s Tuesday announced a $2 pay bump for its employees working on the frontlines during the pandemic effective Feb. 1. The company also provided a $2 pay increase last year. 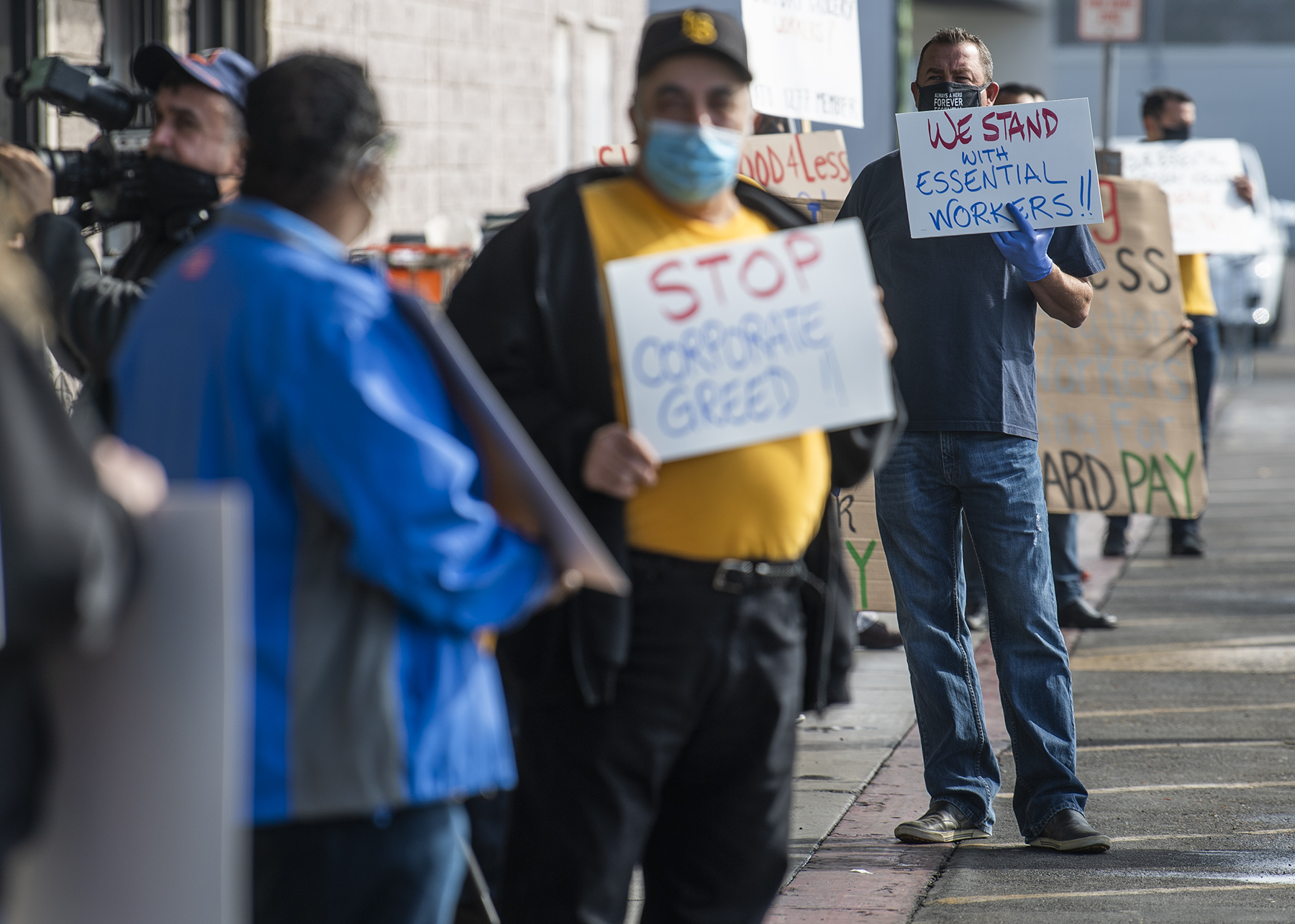 While Kroger is slated to close two stores in Long Beach, the primary focus for city leaders and the union has been the North Long Beach Food 4 Less. The grocery store is located in an area that has long been considered a food desert, with many residents and workers walking to the store due to not owning vehicles.

The closure could exacerbate food insecurity in North Long Beach, Councilman Rex Richardson said during the press conference. He said he is working with city staff and local organizations to prepare a food insecurity plan to assist impacted residents.