It's not quite a pandemic, but RHVD2 is deadly to rabbits, both wild and domestic • Long Beach Post News
- ADVERTISEMENT -

A highly infectious and lethal disease affecting domestic and wild rabbits was discovered in Los Angeles County for the first time this year on Aug. 4. County public health officials reported infected wild rabbits in Littlerock in the Antelope Valley and in Juniper Hills in the foothills of the San Gabriel Mountains.

Rabbit hemorrhagic disease virus 2 (RHDV2) has been spreading throughout the southwestern United States and in Mexico since February 2020, with one case reported in New York State. The first case in California showed up in the carcass of a black-tailed wild jackrabbit found in Palm Springs; it has since been reported in San Diego, San Bernardino and Orange counties and now in Los Angeles. The disease only affects lagomorphs of the family Leporidae, that is, rabbits, hares and pikas, and has no relation to the COVID-19 virus.

RHDV2 has been especially alarming to veterinarians because of its spread from domestic rabbits to wild ones, possibly because of people allowing their bunnies to go outdoors or keeping them in pens outside.

“I wouldn’t go so far as to say that it’s a pandemic, but previous outbreaks have affected only domestic rabbits and it was easier to contain,” said Christina Rettig, associate veterinarian at the Westminster Veterinary Group. “But it’s wild rabbits now—we can’t make the call to the wild rabbits to stay at home.”

RHDV2 symptoms are truly awful, especially for someone with a rabbit in the house. Some manifest few or no symptoms, but others exhibit fever, lethargy, internal bleeding, loss of appetite, breathing difficulty, blue-tinged gums and organ failure. If your rabbit presents with any of these symptoms, they should be taken immediately to the veterinarian. The incubation period for the disease is only a few days, and sources list mortality rates between 70% and 100%.

Shelters and rescues are taking extreme precautions and advise others to do so. Caroline Charland, founder of The Bunny Bunch rabbit rescue, said that they quarantine every rabbit they take in because of health precautions. None of the rabbits go outside.

“We are advising people to keep their rabbits 100% indoors and to have them vaccinated—no outdoor playtime at all,” Charland said. 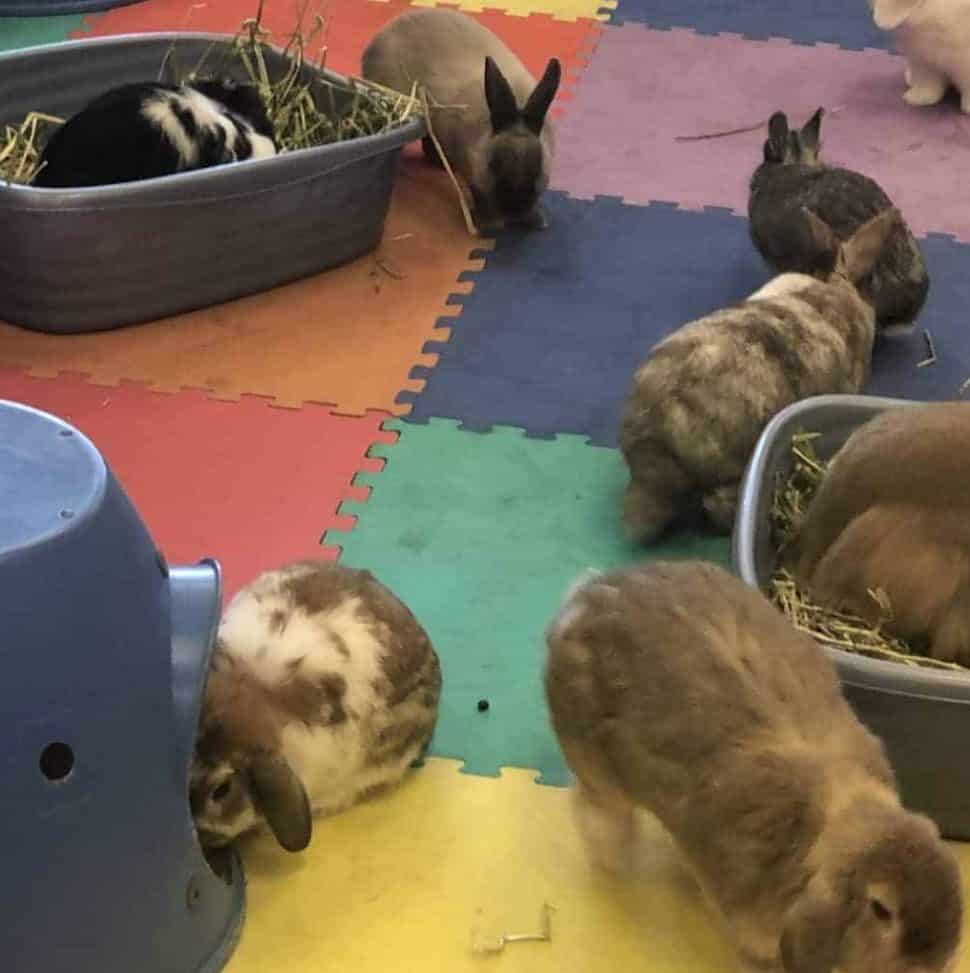 No outdoor playtime for these little guys at the Bunny Bunch. Photo courtesy of Caroline Charland.

Vaccinations for the disease are more of a challenge for a veterinary office or a rescue to obtain than are rabies or distemper shots because they presently have to be imported from Europe and also require a permit by the U.S. government for use. Furthermore, there has to be a reported case of RVHD2 in the state where the clinic or rescue is located before authorities will issue a permit.

“When the virus was first reported in California, we ordered vaccines for all of our rabbits and had them vaccinated a month or so ago,” Charland said. “As of now, there isn’t a vaccine manufactured in the U.S., but I have heard  there are plans to get one made here. Several vets in Southern California have the vaccine. We are doing updates on our blog about RVHD2 and will list which vets have the vaccine.”

If your rabbit’s vet doesn’t carry the vaccine, the Los Angeles Rabbit Foundation provides a list of Southern California veterinaries that carry the vaccination and are currently vaccinating rabbits. The clinic Rettig practices at, The Westminster Veterinary Group, 6512 Westminster Blvd., Westminster, is the closest location to Long Beach and was one of the first to get the vaccines.

“We had a really good response to people wanting the vaccine—we had several hundred ordered since June, and we used them all,” Rettig said. “We had clients that came from several hours away just to get their pets vaccinated.”

Rettig said that the vaccine they use, Eravac, is effective in preventing RVHD2 after up to seven days of exposure to the virus. It can be administered to rabbits as young as 30 days, which is younger than when most people get their pets.

Rettig said that booster shots should be administered annually for general health care because the disease is so contagious, and your bunny doesn’t require contact with an actual wild rabbit to get the virus. Keeping your rabbits indoors is good advice in general, but this particular virus can hitchhike on shoes and clothing.

“It’s so contagious,” Rettig said. “If you and I go on a hike today, if those shoes pass through an area with infected wild rabbits, the virus can live as long as three to four months on a surface.”

Rettig advised leaving outdoor clothing and shoes in a separate area and disinfecting them with an industrial product. Rabbits should also not be left on patios until they’re vaccinated—the disease can be transmitted by insects.

Food, too, can be a concern. Rettig gave the example of unvaccinated rabbits in a state, such as Pennsylvania, with no reported cases as yet, and eating greens from an area that has reported RVHD2 incidences.

“There is a movement of people who want to say to the USDA, hey, this isn’t a foreign disease anymore,” Rettig said. She shares Charland’s hope that a vaccine will be manufactured in the United States soon.

If you live with a rabbit, the Los Angeles Rabbit Foundation adds the following tips to keep them safe:

If you find a dead rabbit in the wild, contact California Department of Fish and Wildlife at 916-358-2790.

If a domestic rabbit in your household or that of an acquaintance or relative dies, and there are symptoms of the disease such as blood on the mouth, contact the vet and California Department of Food and Agriculture at 909-947-4462.