Long Beach officially entered into an agreement with Caltrans Tuesday night that will allow city crews to access certain state-controlled areas near freeways to clean up homeless encampments and other debris.

City officials had been seeking the deal with Caltrans for years, but the recent infusion of federal funds for pandemic recovery provided the city the resources to move forward with cleanups without concern about whether it will be reimbursed by the state.

“One thing that’s really changed is the recovery act,” said City Manager Tom Modica, referencing the $153 million of flexible funding the city received from the federal government earlier this year. “We were always willing to take it on but Caltrans would never pay us, and if we sent them a bill they wouldn’t pay that either.”

The City Council voted in March to set aside $5 million to help clean up the city. That funding is now being tapped to clean freeway embankments and surrounding areas.

Some of the $5 million the City Council set aside for cleaning up the city will be used to pay for cleanups of at least 22 sites identified by Caltrans and the city over the next year, but city officials said that the agreement could be extended beyond that. 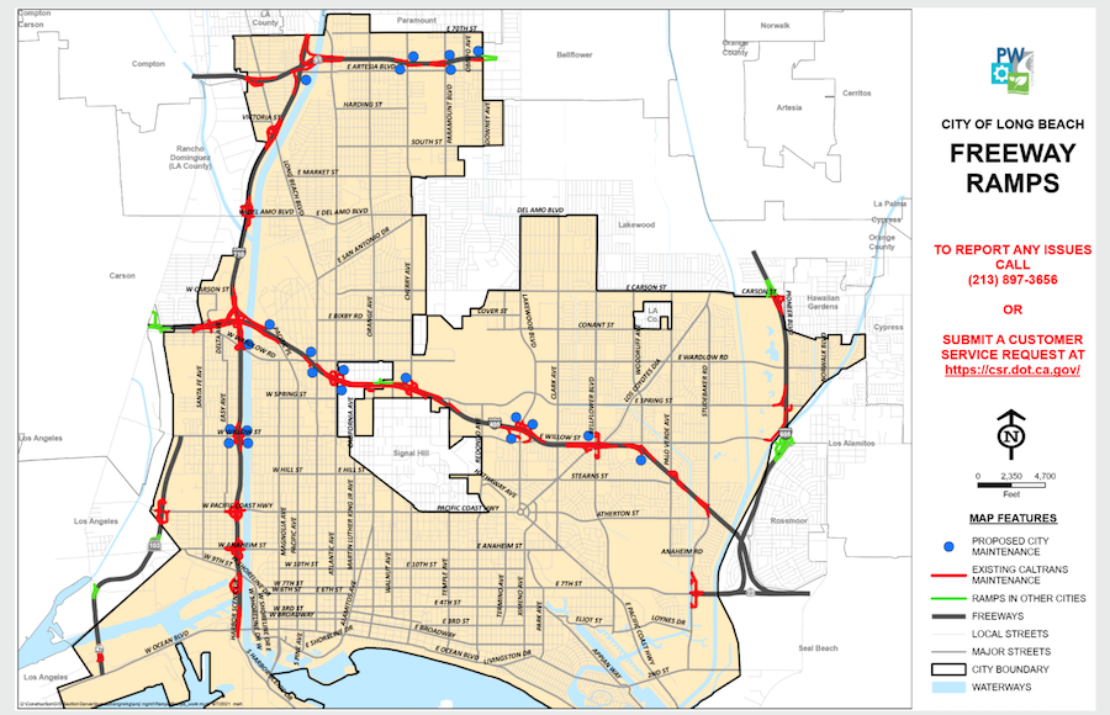 A screenshot of a map presented to the Long Beach City Council showing blue dots where the city intends to clean up state-owned land.

Half of the sites are along the 405 Freeway with clusters along the Lakewood Boulevard, Atlantic Avenue and Long Beach Boulevard exits and another at the Willow Street exits along the 710 Freeway.

Mayor Robert Garcia said that the city is in the process of negotiating a similar agreement with Los Angeles County that could allow city crews to access county property in the future for similar cleanups.

Garcia said the City Council will be having a “fairly extensive” study session at its July 13 meeting where greater details of cleanups on Caltrans sites and other efforts to deep-clean the city will be discussed.

A city memo released in May said that cleanups like the ones that the city plans to do on Caltrans property can cost between $3,000 and $5,000 on average, however, if they require hazardous material disposal, the cost can be significantly higher.

Council members asked if the scope of work could be expanded to include more sites and outreach work at sites that Caltrans has “abandoned” over the last few years causing homeless encampments to spring up in the agency’s absence.

“The homeless situation with the encampments have been completely abandoned by Caltrans,” Councilman Rex Richardson said. “I’m just speaking to the experience of North Long Beach, but homeless outreach is what I really want to see.”

Councilwoman Stacy Mungo Flanigan, who had advocated for the city to play a larger role in cleanups, said that if there are extra resources, the city should work to clean as many sites as possible.

“We don’t want to be limited to the blue dots on our screen,” Mungo Flanigan said, referencing the map of proposed cleanup sites presented to the council. “Any area in our city that needs help, that we have funding for, we really want to see that.”

‘People have to know we are human’: Homeless cleared from prominent encampment Downtown