Rob Wood was among around 100 unhoused people that were cleared out of one of Long Beach’s largest and most visible homeless encampments stretching from Shoreline Drive in Downtown to Anaheim Street.

For the last year, the 60-year-old veteran has been living on the streets of Long Beach.

“It’s my choice to be out here,” Wood said as he packed up all of his belongings Monday morning.

Los Angeles County Sheriff’s deputies were making their way down the stretch on Monday morning, talking with residents of the encampment and letting them know they had to leave.

Tuesday morning, Ocean Blue Environmental Services, contracted by LA County, along with the Long Beach clean team and waste management were clearing out trash and debris from the freshly abandoned site.

Unhoused people are frequently forced to relocate from encampments, the sidewalks fronting businesses and other public spaces. Sweeps along the Los Angeles River occur about every six months, one of the unhoused people said.

Who handles an encampment cleanup can become convoluted, with multiple agencies remaining in constant communication to determine who is responsible for what. For example, areas along the LA River fall under LA County’s purview, but across a single chain-link fence it’s a city issue. Caltrans is responsible for cleanup along freeways while railroad operators handle areas near train tracks. 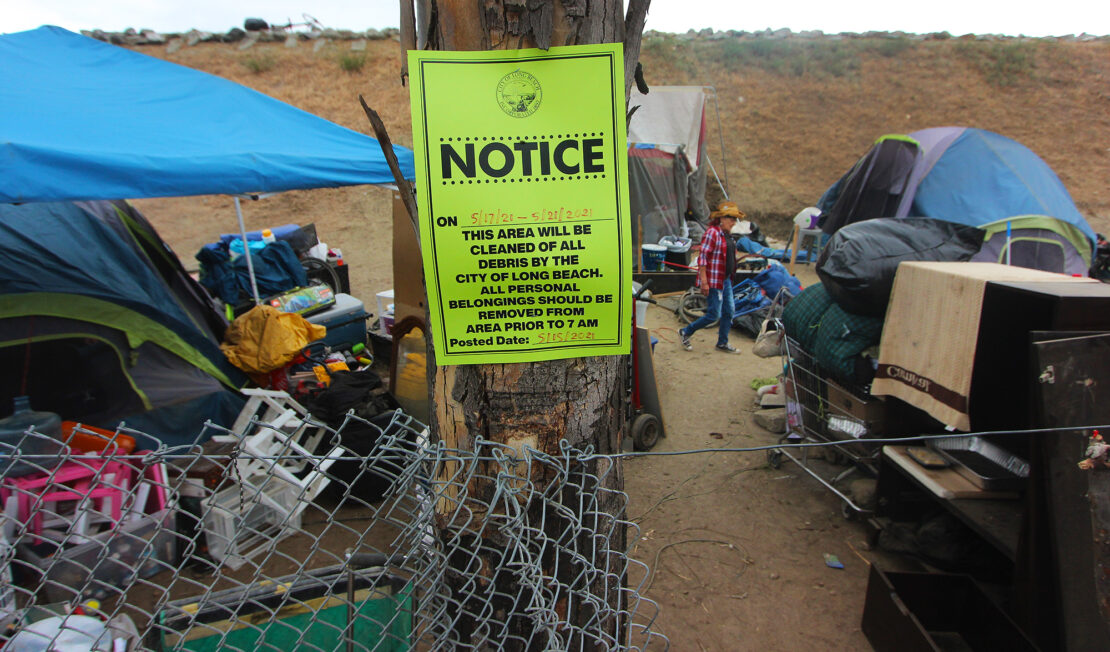 A city notice that the homeless encampment along Shoreline Drive and the LA River is being cleared out, Monday, May 17, 2021. Photo by Brandon Richardson.

“We have inner-jurisdictional meetings with the county and Caltrans every other week trying to work toward solutions,” said Paul Duncan, a services officer with Long Beach Health and Human Services, who noted that homelessness will remain a challenge until there is enough permanent housing.

“We need to balance the needs of the community, the utilization of public spaces and the ability of people who don’t have housing to meet their basic needs,” Duncan said. “It’s tough.”

The city is looking into modular shelter communities similar to the tiny homes popping up in Los Angeles, Duncan added.

Regardless of which agency takes the lead on clearing a particular encampment, Duncan said they try to engage with people to inform them about various resources, provide coronavirus testing and screen them to see if they qualify for specific programs such as Project Homekey. Whether people are receptive to engagement is a “mixed bag,” he added.

Aside from complaints from residents about the unsightly appearance of large encampments, Duncan said there are safety concerns, including the risk of fires. Along Shoreline Drive, extension cords can be seen running from the camp to street signage where one person haphazardly tapped into the city’s power grid. Similar issues have occurred where people cut and divert water lines.

It’s also important to keep debris from making it way into the LA River and the ocean, Duncan said.

But areas such as Shoreline Drive along the riverbed and freeway underpasses are ideal locations for unhoused people to congregate, said Mary Jones, a woman who has experienced homelessness for more than 20 years. 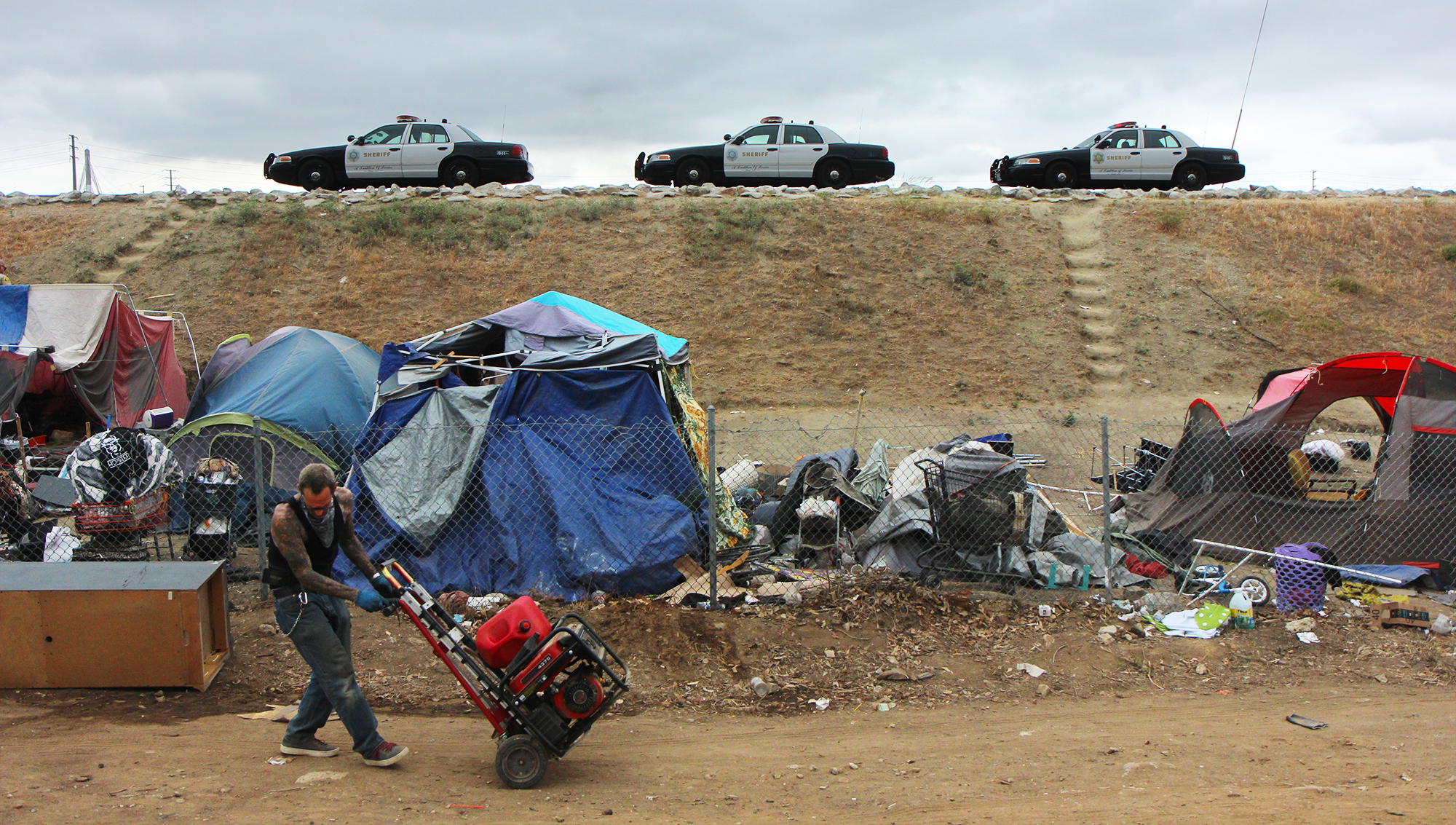 An unhoused man carts a generator along West Shoreline Drive just off the 710 Freeway in Downtown Long Beach, Monday, May 17, 2021. Photo by Brandon Richardson.

“There are no businesses and no residential areas,” she said.

One unhoused man who declined to give his name said Monday was his second time he experienced his encampment getting cleared out. But like several others, he said he would simply wait for crews to vacate the area and then head back to set up camp again.

“The cleanup will occur and we know some people will likely come back to this general area,” Duncan said, adding that cities and government agencies across the country are constantly grappling with how to handle unhoused people who refuse assistance services.

Jones, who has lived on the streets of Long Beach for the last four years, said she has been part of encampment clearings numerous times.

“I’ve had them take everything,” she said, recounting one instance where Long Beach officials did not allow her to recover some of her belongings, including an EBT card and her phone.

There are too many hoops to jump through and rules to follow when it comes to government assistance, Jones said. While some choose the lifestyle of the homeless, many others have skills and an education but have just fallen on hard times or experienced a string of hardship, she said.

“Do what they say, pack up, move out of their way, ask them what to do next and they’ll say they don’t know,” Jones said. “But people have to know that we are human.”

Ocean Blue Environmental Services clears debris from a homeless encampment along the LA River, Tuesday, May 18, 2021. Photo by Brandon Richardson.