After months of COVID-19 ravaging the country, the first batches of newly approved vaccines are offering a light at the end of the tunnel, but some of the worst-hit communities have been inundated with misinformation surrounding the vaccine, prompting skepticism, confusion and a need for doctors on the front line to fight back with the facts.

With hope on the way for some of those most in need, Dr. Elisa Nicholas, CEO of TCC Family Health in Long Beach, is using her years of experience in underserved communities to educate patients and combat misinformation that could get in the way of saving lives. Her longstanding connection with her patients positions her to be an ambassador to communities being ravaged by the virus.

By far the hardest hit group in Los Angeles County has been Latinos, as well as those who live in low-income areas. The difference among these groups and others has only grown with the massive surge in cases, hospitalizations and deaths over the past few weeks, officials said.

Over the past four weeks, the death rate among Latino residents has grown from 1.4 daily deaths per 100,000 residents to 4.5 daily deaths, which is twice that of White residents, LA County health officials said this week.

Specifically in Long Beach, Latino and Black residents are disproportionately likely to be hospitalized with the virus, and cases have surged most in the areas of North and West Long Beach.

“The communities we serve are having the most deaths,” Nicholas said. “I know vaccines can work amazingly well to address this issue.”

But even before pharmaceutical companies Pfizer and Moderna announced their vaccines, and the Food and Drug Administration granted them emergency use this month, misinformation inundated the internet and flooded these communities, some of which have had a history of mistrust with the health care industry.

For example, researchers at the Federation of American Scientists found that disinformation from Spanish-language news was spreading rapidly among Spanish-language Twitter users. The report claims that malware implanted in links to articles allowed for manipulation of web traffic toward more questionable articles.

And on the ground, in her personal conversations with patients, Nicholas has heard jarring instances of disinformation and of distrust.

One patient she recently spoke with, who declined to be identified because of her immigration status, is a Latina employee at a restaurant in Paramount with a mostly Latino staff.

The woman said her coworkers had been discussing the vaccine, and someone mentioned the outlandish conspiracy theory that it contained a microchip that would be injected into people.

“I wasn’t surprised because I have heard about this,” Nicholas said. “I think there are many different stories about this chip, but I think that’s a conspiracy theory. I do not believe there is a chip—it’s false.”

The woman also asked why she should take the vaccine if she’s not a member of the groups most likely to die from the virus, such as the elderly and the sick. Nicholas explained to her that the more people vaccinated in the community, the larger the defense is against the virus.

“You can have a 95% effective vaccine, but if only 30% take it, we are not going to be able to control this COVID-19 pandemic,” Nicholas said.

Despite the conversation she had with the restaurant worker, Nicholas said that most of her Latino patients are not doubtful of the vaccine. But the misinformation cuts across racial lines into other groups.

Nicholas said she spoke to a Black grandmother from Chicago who vaccinated her children against other viruses such as polio and meningitis but doubted the COVID-19 vaccine.

“She said, ‘I think they may be experimenting with us,’” Nicholas said. A history of mistreatment by medical officials toward the Black community may be the root cause of the mistrust. One example, known as the “Tuskegee effect,” dates back to 1932 when public health officials studied 600 Black men with syphilis for decades without telling them about it or treating them for the disease, which ultimately killed many of them. The study ended in 1972.

Historically, Black communities did not receive adequate health care. The ramifications of that mistreatment could be seen in Black infant-mortality rates, which have been higher than other groups, Nicholas said.

Long Beach is also home to a large Cambodian community, which has also been heavily affected by the pandemic.

Cambodian organizer Chan Hopson volunteers every Thursday to pass out food to families in Central Long Beach and has witnessed firsthand how the virus has impacted monolingual Cambodian and Latino communities. Aside from the physical ailments caused by the virus, Hopson said the community also faces a lack of information on the virus and the new vaccines.

She said some are confused about the differences between the seasonal influenza vaccine and the new COVID-19 vaccine. They expressed to her that they did not want to take any vaccine, fearing they would feel sick after the shots. Hopson reached out to Nicholas to join a panel of medical experts and city leaders to address these concerns in a live-streamed seminar Saturday morning. The event was translated in Khmer, and was shared on a Khmer Facebook page.

“My intention is to take the fear out of the people,” Hopson said. “That’s why I talked to Dr. Nicholas—it’s a very crucial topic for our community because they are skeptical about the COVID vaccine.” 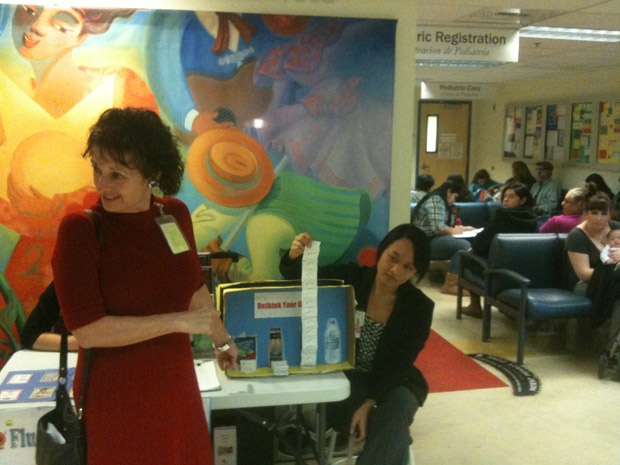 Dr. Elisa Nicholas touring one of the eight TCC clinics before the pandemic. 2013 file photo.

Nicholas understands that skepticism also arises following early reports from the United Kingdom, where some individuals who got the vaccine experienced allergic reactions. But Nicholas explains the vaccine was thoroughly studied through strict guidelines at the National Health Institute.

“I think people are skeptical about how quickly [the vaccine] was developed, and the government’s involvement,” Nicholas said, but she clarified that the messenger RNA technique used in the new vaccines to prepare the body’s defenses for a COVID-19 attack was already developed years ago.

Members of the general public are not expected to receive vaccinations for several more months as the first batches are distributed to health care workers and high-risk groups.

With ICU capacity reaching 0% this week in the Southern California region, the pandemic is breaking records and entering darker days since the first infections locally in March. Nicholas says the pandemic has taken a toll on everyone, but recommitting to protecting the most vulnerable through mask wearing and social distancing is the only way the virus will be controlled until widespread immunity finally arrives.

“We have a pandemic and the rates are really high. We will never get this under control without the vaccine,” Nicholas said. “We still should wear masks because we are in a major crisis. We are all very tired—people want to go out and do things, but we have to step back and recommit.”