Coronavirus has been particularly devastating in the densely-populated, more working class areas of West, Central and North Long Beach.

Yet the Century Villages at Cabrillo, a supportive housing community in the middle of West Long Beach with families, veterans, formerly homeless individuals, seniors and others, has largely avoided the high numbers of cases seen in multifamily housing settings across the region.

The Century Villages at Cabrillo houses 2,133 people, yet only 32 have tested positive for coronavirus since March. Despite it being located in one of the ZIP codes hardest hit by COVID-19 in Long Beach, that’s an infection rate of just 1.5%.

Long Beach as a whole, meanwhile, has seen 41,079 positive cases as of Tuesday among its 462,000 residents. That translates to an overall infection rate of 8.9% of the city’s population.

So how has the Villages largely avoided the carnage of other residential settings? Executive Director Steve Colman said leadership there was very proactive when news of COVID-19 first circulated, particularly because many of its residents are older and asthmatic.

Close to half of those who live at the Villages, a former Naval housing complex, are veterans.

Like other congregate settings, residents at the Villages live in multiple apartment buildings and short-term emergency housing shelters, some of which have shared common spaces like bathrooms and laundry rooms.

On March 2, Colman sent a daunting first email to his leadership team composed of nonprofits and government agencies led by 11 onsite partners about new city health protocols that the 27-acre community would need to follow to protect themselves from a pandemic that has now killed 420 people in Long Beach.

Colman and his team sent home everyone who could work remotely, bombarded residents with different types of messaging to follow social distancing protocols and rapidly geared up clients and staff with PPE and disinfectants.

Colman credits the relatively low number in coronavirus cases to a combination of being proactive, strictly following local health protocols and, well, luck.

While the entire public was asked to follow social distancing rules across the city, what made Century Villages so successful was that staff and residents cooperated and took the crisis seriously. 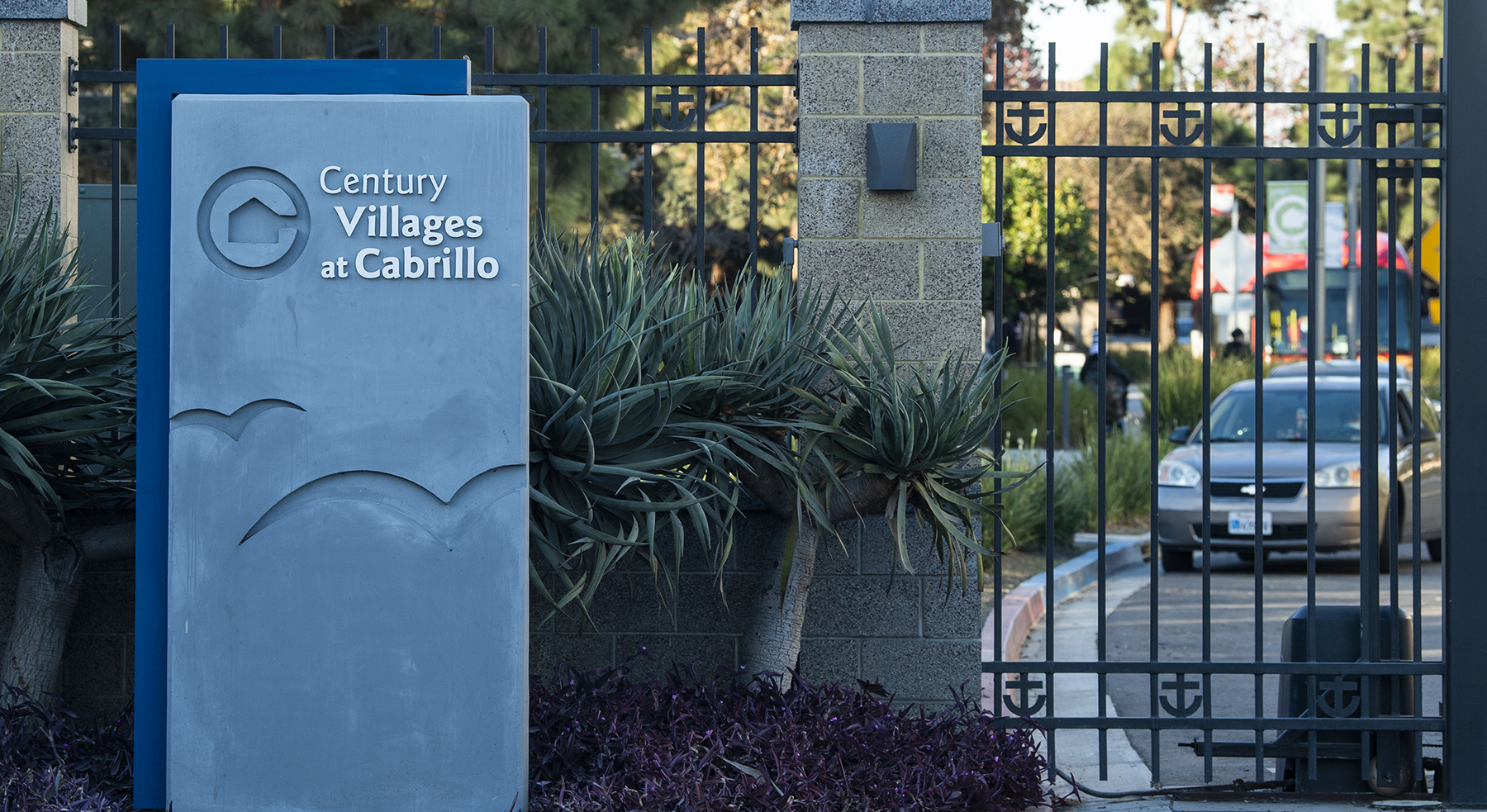 One of the exits at Cabrillo Century Villages in Long Beach Tuesday, Dec. 15, 2020. Photo by Thomas R. Cordova.

One of Century Villages’ greatest advantages was a month’s worth of disinfectants stored on the campus thanks to its custodial team—at a time when entire stores were being depleted of their cleaning merchandise following mass panic buying.

Colman, who manages the property development programming at the campus, said that overnight, the team poured the disinfectant liquid into bottles, creating their own makeshift hand sanitizers and distributed them to homes, offices and other populated areas throughout the campus.

They used electrostatic foggers—a disinfecting tool similar to bug-bombing a home—to clean those same spaces and installed plexiglass barriers for any offices still operating in person.

Meanwhile, Century Villages purchased 1,500 reusable cloth masks and distributed them to their residents across the campus.

On March 20, while the public waited in long lines for household supplies and food, Colman had staff travel to grocery stores to find PPE, food and toilet paper for the many high-risk residents in need.

A ‘buttoned up’ approach

With past contagious disease scares from SARS and HIV/AIDS, Colman said everyone on his team was prepared for COVID.

“We need to be role models,” he said, so they took a “very buttoned up about our protocol.”

Learning from outbreaks seen nationwide in the past, educating and communicating with the public was key. At Century Villages, it has been frequent and consistent.

“Back then, every single day was like a new day… It was like the movie Groundhog Day every day,” he said.

Colman met with the staff in his own programming daily and with the leadership team weekly to go over a changing game plan. Executives overseeing agencies and organizations on the campus who make up this leadership team are called the Villages at Cabrillo Collaborative.

Dora Jacildo, executive director of Child Lane, one of the organizations onsite who also serves a chair for the collaborative, facilitated these monthly meetings that turned weekly after COVID. Child Lane closed for a month in mid March to train staff and move furniture, and were already prepared with disinfectants due to the nature of working with children at the site. 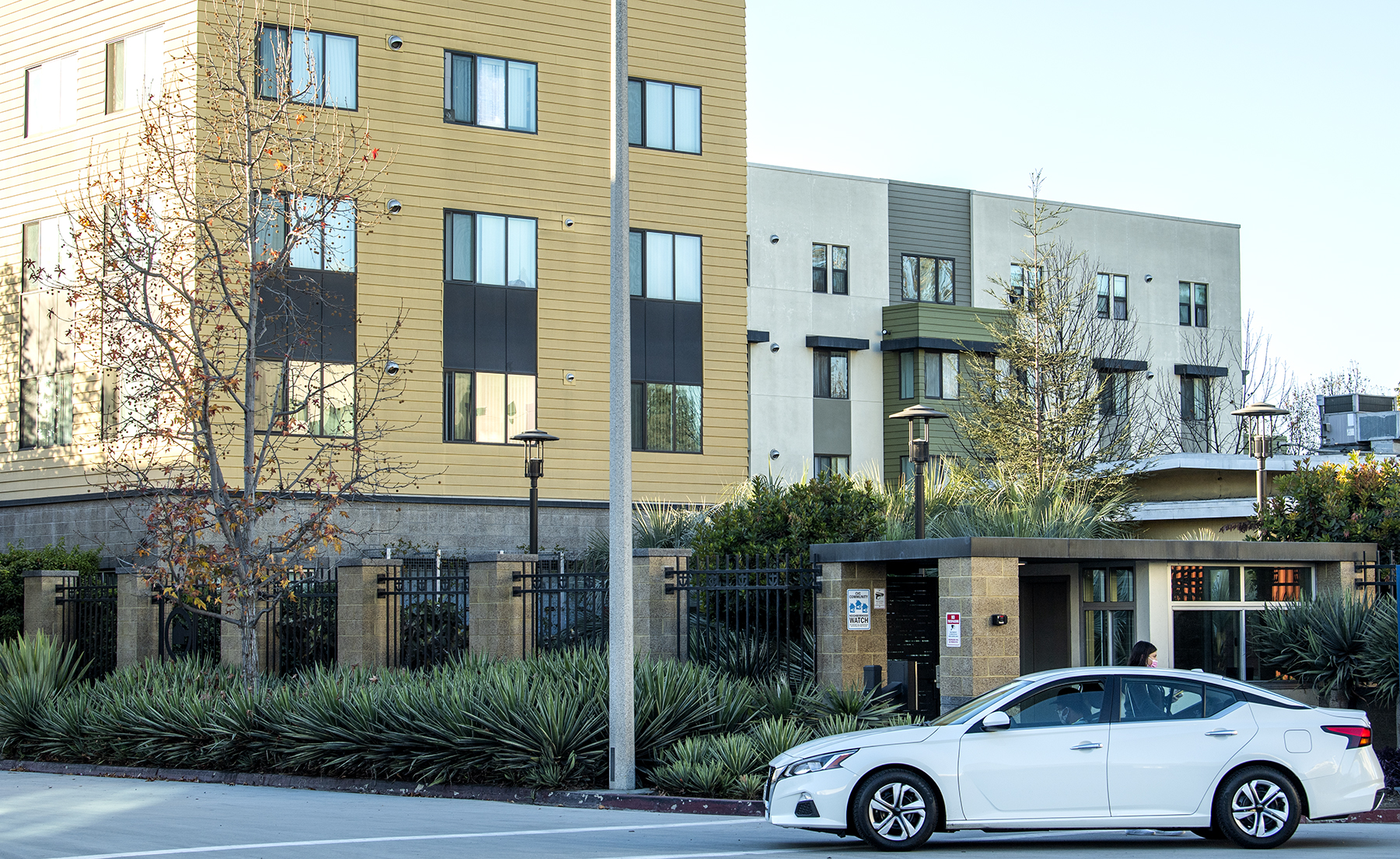 The team searched for potential isolation rooms for those who would become infected or exposed, monitoring them until they’ve recovered or have been cleared.

Colman said he regularly spoke with the city’s health department too, and it sent about two dozen mobile testing stations to the campus, having administered more than 1,000 tests since the start of the pandemic.

City spokesperson Jennifer Rice Espstein said that the Long Beach does not track mobile testing per site, but said that the city averages about 100 mobile tests per day citywide. The city began testing at the Villages in May on an “as needed” basis, such as if a resident was potentially exposed, for example. On Nov. 5, the city began testing at the campus twice a month on the first and third Thursday, she said.

“It was a lot of fear at that time. There was a lot of unknown and a lot of speculation,” Colman said about the scrambling to protect the public. “We were able to move in a methodical manner and a well-thought-out manner.”