Kelp fuel is making a comeback 50 years after it was first proposed thanks to new technology • Long Beach Post News
- ADVERTISEMENT -
May 23 8:00 am

The future of eco-fuel production may be growing in the ocean between Long Beach and Santa Catalina Island.

Researchers of the Kelp Biofuel Project, a collaboration between USC’s Wrigley Institute for Environmental Studies and La Cañada-based Marine BioEnergy, are investigating the potential of kelp for large-scale cultivation. Grown at industrial scale, the plant could become a source of food and fuel, providing an eco-friendly alternative to crude oil.

Kelp is already grown for food on a smaller scale in many Asian and some European countries. Some, like Norway, have also started to experiment with kelp-based fuel production.

“The U.S. is actually lagging far behind in seaweed cultivation, for any purpose, even though we certainly have the personnel with expertise, the technology, the resources,” Diane Kim, has a doctorate in biology and is the project’s lead scientist, said.

“We are an ocean nation,” she said. “We’re grossly underutilizing that resource.” 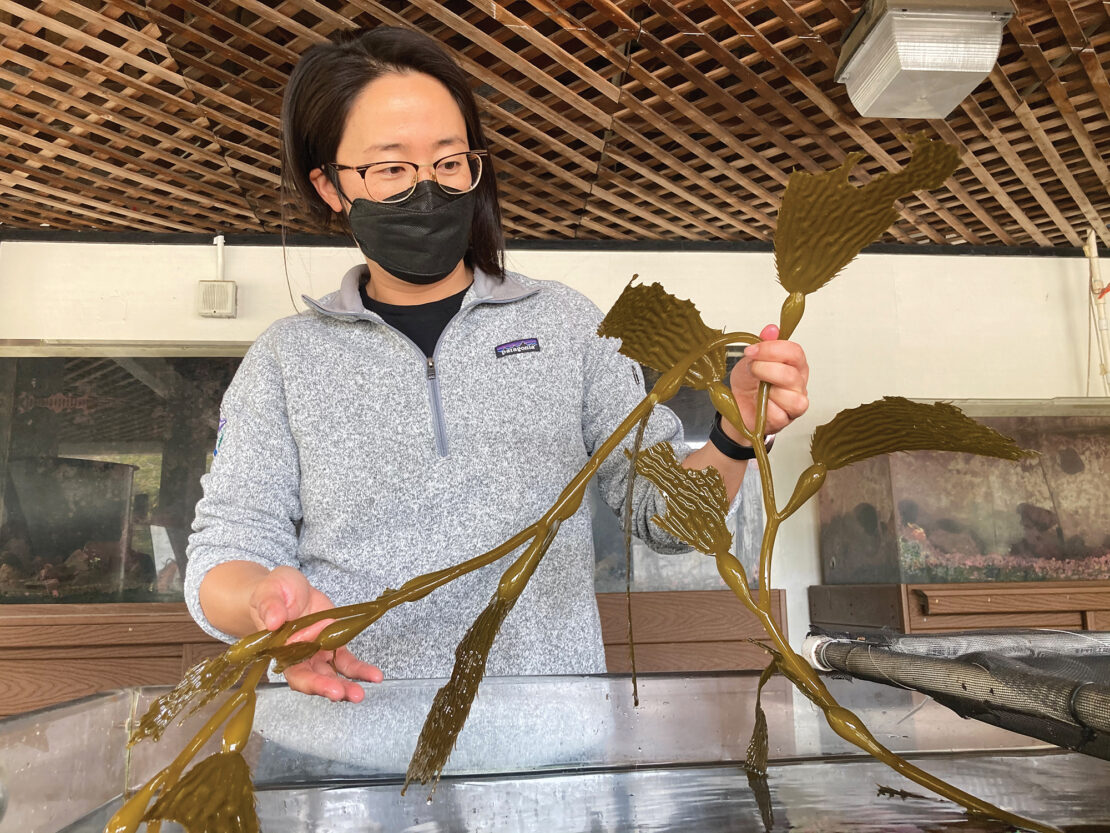 With fresh water considered to be a scarce resource in the near future, creating agricultural techniques that can function without it—whether it be for fuel or food production—will be crucial,  Brian Wilcox, co-founder of Marine BioEnergy, said.

“People have said that fresh water will be the oil of the 21st century,” Wilcox said. “What we have is a way to do agriculture without fresh water.”

Kelp’s potential to be used for biofuel production in particular has long been known; Dr. Howard Wilcox, Brian Wilcox’s father, first pitched a kelp-to-methane project in the early 1970s.

Kelp and other plants can be turned into fuel through either fermentation or a process called hydrothermal liquefaction.

For their kelp project, the Wilcoxes focus on the hydrothermal liquefaction process, the result of which is a fuel that functions much like regular gasoline.

In this process, the kelp is put in a hot, pressurized water environment with a temperature of roughly 660 degrees Fahrenheit, to break down its solid structure. The result is a liquid called biocrude, which, just like the crude oil from fossils, can be refined and delivered through regular fuel pumps.

Because they don’t have to fight gravity like their terrestrial counterparts, kelp plants’ molecular structure is easier to break down, making it particularly suited for biocrude production. Kelp’s fast growth rate of up to one foot per day makes it a prime source material.

“Because it grows so big, it grows so long and it’s a perennial plant,” Brian Wilcox said. The plant’s perennial nature means it can be cut and doesn’t have to be replanted after each harvest.

Fifty years ago, the U.S. Navy—where the elder Wilcox worked as a civilian staff researcher—was looking into alternative fuels because of the 1973 oil embargo, which highlighted the country’s discomforting reliance on foreign oil, which made it vulnerable to the whims of foreign powers.

But when the oil embargo was lifted, interest in alternative fuels waned. “People were not as excited about energy as they were in the early ’70s,” Wilcox said.

The younger Wilcox went on to begin a career spanning nearly four decades at the Jet Propulsion Laboratory in Pasadena, relegating his interest in reviving his father’s project to the weekend and evening hours. Last year, he retired. “Now I’ll be able to give it my full attention,” he said.

At the same time, a looming climate crisis is driving interest in alternative fuel sources once again.

The main challenge to overcome in order for any large-scale kelp production to take place in the open ocean is how to provide plants like kelp with both nutrients and sunlight on a consistent basis. Sunlight is found in the surface layer of the ocean, while most nutrients are found in deeper layers.

Wild-growing plants find the necessary combination of those resources in coastal areas where water depth fluctuates and nutrients are washed in from deeper levels of the ocean. But to grow kelp at the scale necessary to make a dent in the country’s energy needs, the Pacific’s rocky coastline simply doesn’t offer enough space that provides those conditions.

That space is only found in the open ocean, the depths of which have so far proven prohibitive to significant plant growth.

To overcome this challenge the team behind the Kelp Biofuel Project developed a “kelp elevator,” which pulls the plants—tethered to a buoy located off the shore of Catalina Island—up and down between the respective nutrient- and sunlight-rich levels of the ocean every day.

The question was: How would the plants handle the change of environment that would come with this daily trip?

“There were some people who were sure that the kelp would not survive. There were others who were very optimistic,” Kim said. The results after 100 days of piloting the kelp elevator were promising: “the kelp, actually, are doing just fine.” 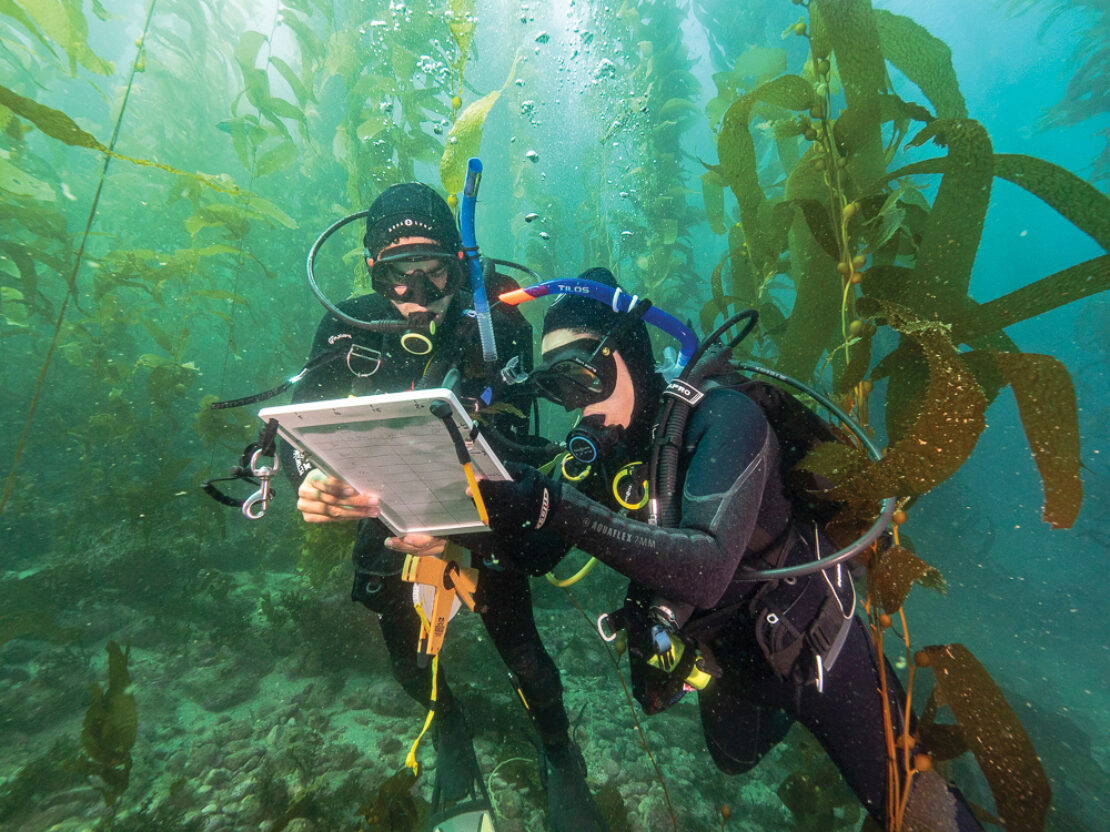 Not only did they survive just fine—they grew at a faster rate than their counterparts in natural kelp fields used for comparison.

Now, the next steps will focus on the technological side of the project. While the kelp elevator simulated the depth-cycling the plants would have to endure, buoys near the coastline won’t be a practical solution for large-scale production.

Instead, Marine BioEnergy—led by Wilcox and his wife, Cindy—is developing a design concept for a massive grid, dragged on each corner by underwater drones and held stable by programmable floats, allowing it to move toward the light in the daytime and to nutrient-rich lower levels at night, and out of the way of ships and storms at the surface like a marine magic carpet.

“We’re closing in on a really nice system for the kelp farm,” Wilcox said. The patented system, he noted, would be using only existing technology, but will have to be tested for functionality in an open ocean environment.

Once perfected, the underwater kelp farms have the potential to cover roughly 10% of the nation’s energy needs utilizing an ocean area the size of Utah, according to Marine BioEnergy’s projections.

Kelp fuel would be competitive with crude oil at an average price of $60 per barrel. Subsidies, such as climate tax credits, could help the industry get an easier start, Wilcox noted.

“The governments of the world have to decide: we’re not going to wait until tomorrow, we’re going to start today,” he said. “We’re actually not going to burn fossil fuels any longer.”

Growing kelp at a scale that would make it as economically viable as this latest project promises has been the main challenge in bringing kelp fuel to market so far, said Kim, the researcher.

“The biology of it, to be honest, is not that complicated,” she said. “But creating buy-in, creating the market that—at this point—doesn’t exist, that’s the challenge.” With the results of the pilot project in hand, the possibility of kelp fuel stations finally seems within reach.

“Now we have the technology to realize the potential of kelp at the kind of scale we’re talking about,” she said. “I can just imagine, one day, pumping kelp fuel into my car and remembering when this all started.”