A panel of lawyers and civic leaders met Saturday for a virtual summit to condemn hate crimes against communities of color and to share resources for victims.

During the summit, Teresa Gomez, Human Dignity program coordinator within the city’s health department, said that her job is to check in with victims of potential hate crimes to help them navigate the aftermath of the traumatic experience.

They are often relieved that someone is following up with them for support, Gomez said, but a concerning trend that she’s noticed in her line of work is that many potential hate crimes go unreported.

Long Beach prosecutors say an incident is determined a “hate crime” if it based on a victim’s disability, gender, nationality, race, ethnicity, religion or sexual orientation. A “bias-motivated incident,” or a hate incident that cannot be prosecuted as a crime, is considered a non-criminal action that is motivated by hate, but is protected by the First Amendment right to freedom of expression. For example, name-calling, distribution of hate material in public places and the display of offensive hate-motivated material on one’s property.

Despite the differences in what makes a hate crime, the panelists encouraged victims to report hateful rhetoric to the authorities.

“We have to make sure people are held accountable when possible,” panelist and Long Beach City Prosecutor Doug Haubert said.

However, there are many factors as to why victims don’t report hateful acts.

Marshall Wong, a senior coordinator with the Los Angeles County Human Relations Commission who has experience in hate-crime data reporting, said a hate crime report is “just the tip of the iceberg.” Wong’s work collecting hate crime data for the commission’s 2019 report revealed that Black people are disproportionately the target for hate incidents and crimes. Data also suggests that Latino victims express fear of retaliation if they report hate crimes or instances of domestic assault to the police. 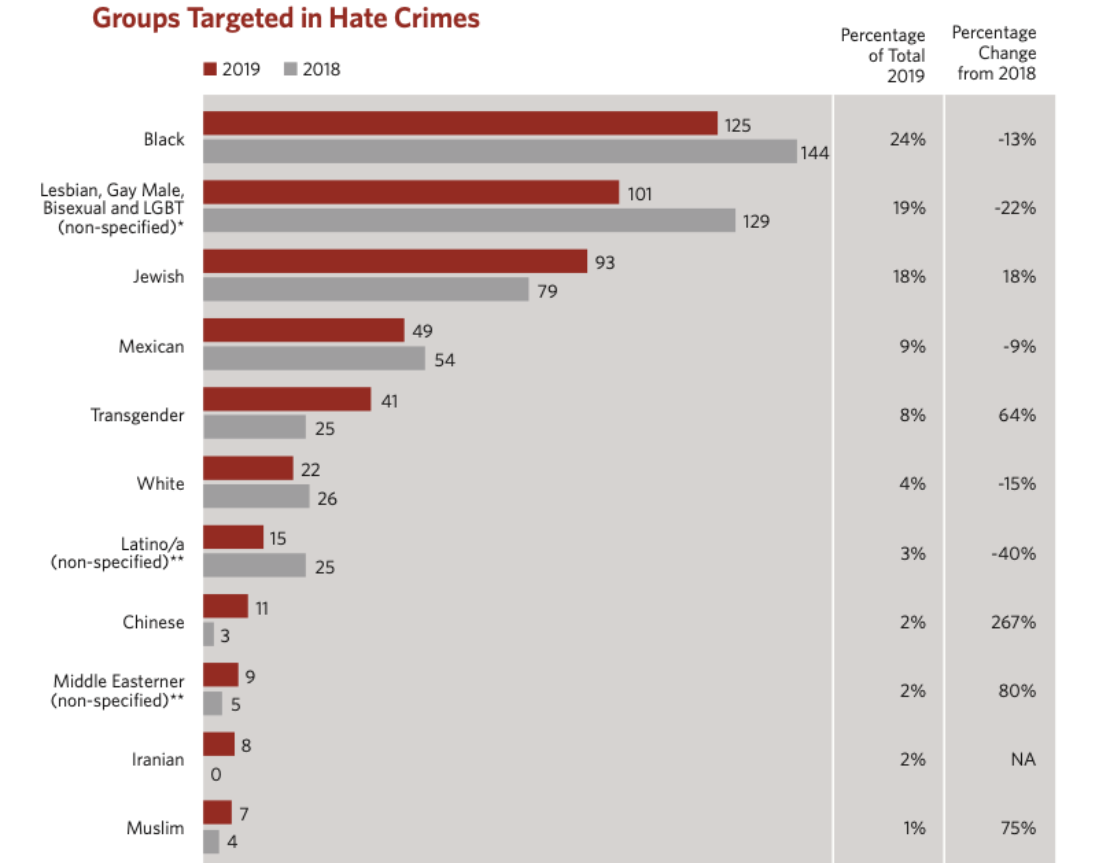 A section of groups most targeted in hate crimes from 2018 to 2019. Data courtesy the 2019 Hate Crime Report from the Los Angeles County Commission on Human Relations.

Underreporting hate crimes is something Long Beach community groups feared had been occurring in their neighborhoods, especially among Asian communities. A string of fatal shootings at businesses in Atlanta, Georgia, two months ago, in which some of the victims were Asian, prompted Long Beach-based community groups to host a vigil to offer support for Asian Americans and Pacific Islanders. Speakers at the event expressed feeling fear given the trend in hate crimes against Asian people taking place in Los Angeles.

Long Beach police data acquired through a public records request showed that the city had not received reports of hate crimes against Asians between Jan. 1, 2020 and Feb. 28, 2021. In that time, a total of 19 hate crimes were reported in Long Beach and none of them fell under the category of anti-Asian. Activists worry that is a result of underreporting.

“We are here to help you,” panelist and Los Angeles City Attorney Mike Feuer said. “None of us are going to stand by in the face of hate.”

Michele Anderson, a prosecuting attorney with the Los Angeles City Attorney’s Office, emceed the event and highlighted three recent incidents that occurred in Long Beach that provoked her to host the virtual summit: the burning of a lifeguard tower painted with the colors of the LGBTQ flag, racist discourse that followed the approval of a child migrant center in Downtown and the distribution of White supremacist propaganda in Bixby Knolls.

“One event of hatred is enough for all of us to be mobilized and say that this should not be tolerated,” Anderson said. “Therefore, we have all come together to fight against it.”