Long Beach’s police officers and firefighters may be among the least-vaccinated city employees, according to data released last week.

Just 58% of firefighters and 51% of police officers reported being fully vaccinated, according to data released last week by the city of Long Beach. Those percentages are slightly higher when factoring in those departments’ civilian employees, but overall, they’re among the lowest confirmed vaccination rates in any city department despite the fact that first-responders were among the first to get access to the vaccine. 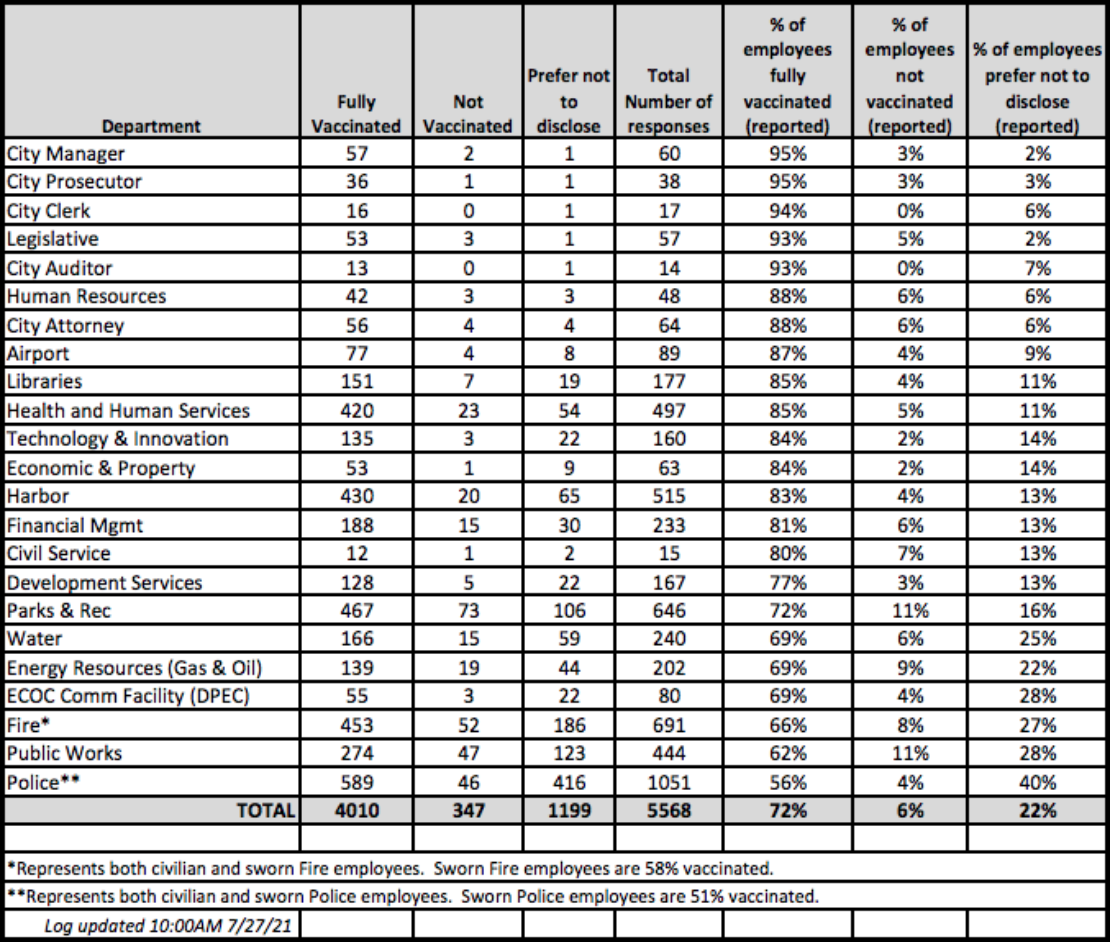 The numbers have prompted calls from Long Beach’s mayor for more employees to “do the right thing” and get vaccinated.

“I believe every single police officer and firefighter should be vaccinated,” Mayor Robert Garcia said in an interview. “That’s been my stance since Day 1.”

Other categories of city workers have vaccination rates that meet or exceed the rate in Long Beach’s general population, where about 73% of adults have gotten at least one shot.

The data, collected in surveys distributed by the city over the past few weeks, requires employees to self-report whether they are vaccinated, but there is an option for them to opt-out of revealing that information, so it’s possible more police and firefighters than it appears are vaccinated.

“Privacy is really important to police officers, so when they had the option to choose privacy, that was a legit choice for them,” Long Beach Police Officers Association President Rich Chambers said. 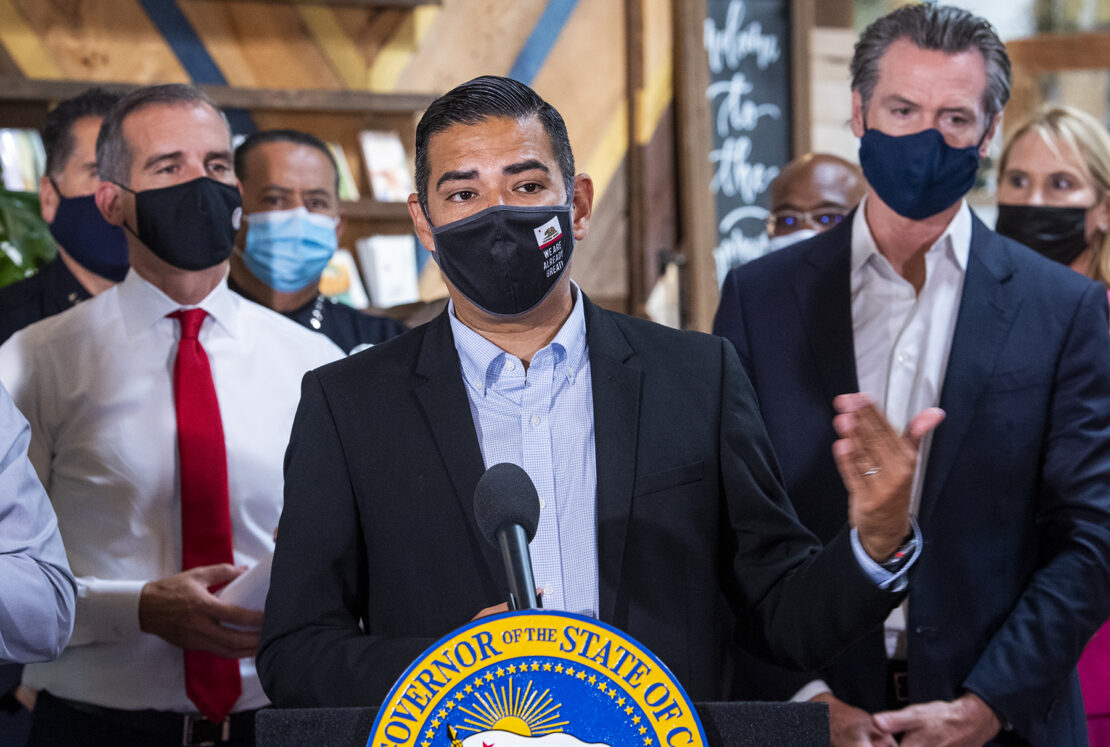 Mayor Robert Garcia announced last week that the city would be moving toward a vaccine mandate for city employees with unvaccinated employees being subject to regular COVID-19 testing. Photo by Thomas R. Cordova.

Long Beach first-responders are not unique in having lower reported vaccination rates than the general public. The Los Angeles Times reported in June that just 51% of LA firefighters and 52% of LAPD officers had been vaccinated.

Long Beach says its invested significant resources into getting its workers inoculated by allowing them to use work time to get shots and hosting 35 vaccination clinics for its employees, “with 27 dedicated specifically to public safety personnel,” the city said in a recent memo.

They’ve also mounted PR campaigns with high-level officials like the mayor, fire chief and fire union president lining up for photo ops showing them getting the shot. And LBPD Chief Robert Luna has repeatedly warned that COVID-19 is the leading cause of death for police officers.

Both the fire department and police department have suffered outbreaks in their ranks, but no Long Beach officers or firefighters have died.

However, the Long Beach Police Department has, at times, come under fierce criticism, with some of its own officers alleging it didn’t take COVID precautions seriously in the early parts of the pandemic. And in December, the police department became the center of international controversy when the Long Beach Post published a picture of hundreds of maskless police officers gathered to listen to the Luna speak after a training exercise at the Long Beach Convention Center. In response, the department cracked down on mask-wearing, warning officers they could be disciplined if they didn’t follow the rules.

Now, with the more contagious delta variant spreading rapidly, the city is on the cusp of implementing stricter rules across all of its departments.

The city announced last week that it would soon require all city employees to be vaccinated or be subjected to regular testing. The policy will go into place after city officials finish a meet-and-confer process with individual city employee unions, something that could take until mid-August.

Since June 1, which is around the time the delta variant arrived in Long Beach, a total of six fire department employees (including one civilian) and 16 LBPD employees (including two civilians) have been infected with COVID-19, according to a city spokesperson. It’s not clear how severe their symptoms have been.

The president of the firefighters union argued those numbers show the department’s current precautions—which include wearing personal protective equipment like masks, gowns and gloves, cleaning vehicles with disinfectants in between calls, and proactively testing employees who are exposed to COVID-19—are already working, even without the blanket vaccine-or-testing mandate.

“Why change something that is working?”  said Rex Pritchard, president of the Long Beach Fire Fighters Association.

Chambers, the police union president, said he was concerned that regular testing of police employees could lead to staffing issues within the department if more officers are found to be COVID-19 positive and are forced to quarantine. However, he said that the specifics of the mandate have yet to be hammered out with the city so it’s unclear what those protocols would be.

Mayor Garcia said Monday that Long Beach’s new policy was recommended by the city’s health department and he supports it. He also added that if virus spread gets substantially worse, there might have to be “bigger action” taken.

Other cities have already gone farther in their vaccine mandates.

New York officials announced Tuesday that it would start to require proof of vaccination to eat indoors, go to live performances or exercise at an indoor gym.

Pasadena, another city in Los Angeles County that has its own health department like Long Beach, said it would require vaccines for workers—without any testing alternative—once the vaccines are officially approved by the Federal Drug Administration, something that could happen in the next few months.

Los Angeles Mayor Eric Garcetti said last week that LA, which is currently moving ahead with plans similar to Long Beach, could follow Pasadena once the vaccines receive full federal approval beyond its current emergency authorization.