Long Beach could be looking to expand its recently created homeless outreach team, which responds to calls involving the unhoused with nurses and clinicians instead of police officers, in the upcoming fiscal year.

The city announced two Restorative Engagement to Achieve Collective Health (REACH) teams in July, which use a public health nurse, mental health clinician and two outreach workers to connect with people experiencing homelessness both to lessen the strain on police and fire personnel, but also to connect them to services like housing and mental health care.

The teams currently only work weekdays.

An expansion would add one more team, bringing the total to three, which would allow the city to offer the service over weekends.

Kelly Colopy, director of the city’s Health and Human Services Department, said that since its implementation in August, the REACH team has responded to 567 calls where the team met more than 1,800 people, and 87 of those resulted in ongoing support for mental health and other services.

The two teams have helped to move some of the most vulnerable residents off the streets over the past 10 months, Colopy said.

“People with over 20 years of unsheltered homelessness, people with mental health issues that have impacted their ability to provide basic care for themselves,” Colopy said during a press conference. “People who are regularly using fentanyl and are at high risk for overdose and those who are directly experiencing human trafficking.”

The city has not yet released the totals from its February homeless count, but city officials said that number is likely to be released in the coming weeks. The most recent data available from the city is the 2020 count, in which volunteers found 2,034 people either unsheltered (1,582) or in some form of transitional or emergency shelter.

The 2021 homeless count was not conducted due to the pandemic.

Expanding the program to three teams will require the city to allocate about $500,000 more to the Health Department to pay for the nurse, clinician, outreach workers and necessary supplies, said Paul Duncan, the city’s homeless outreach director.

Duncan said that one nurse currently part of the team is paid out of Measure H funds, the countywide tax to address homelessness approved by voters in 2017, but the city has exhausted those funds for the program and would either need to get more from the county or have the City Council direct more money to the REACH program in the upcoming budget cycle.

Adding more REACH teams has been referenced as a priority by both remaining mayoral candidates, Councilmembers Rex Richardson and Suzie Price, who will face off in the November runoff.

Richardson asked the city in April to look at the feasibility of adding teams and has said the city needs to have more control over mental health services. Price has said that each of the nine City Council districts needs its own REACH team. 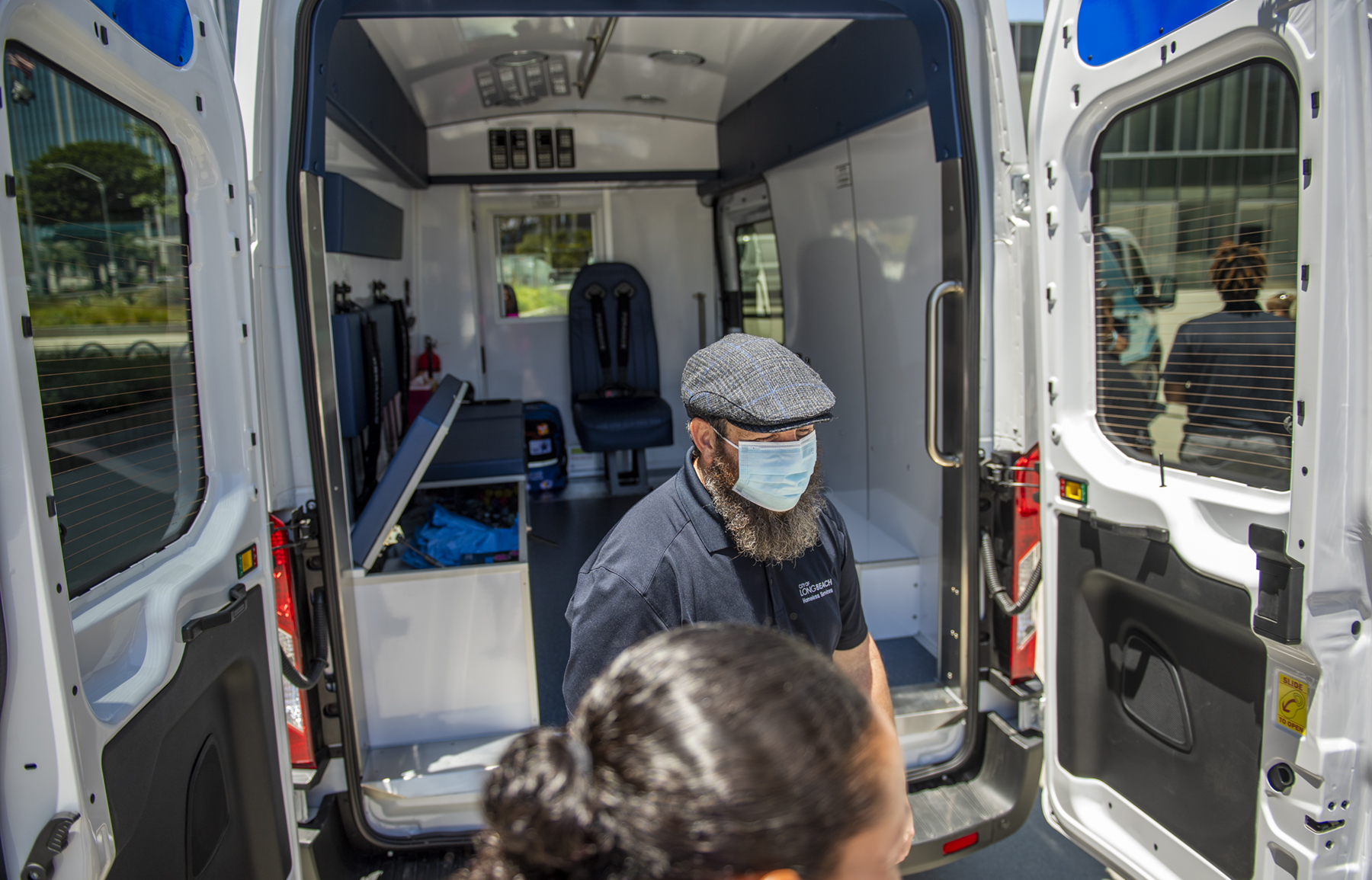 Paul Duncan, Homeless Services Bureau Manager, shows the inside of the new Homeless Services van while in front of City Hall during a press conference in Long Beach Monday, June 27, 2022. Photo by Thomas R. Cordova.

The REACH teams recently got a new Ford Transit van that’s been converted into a type of medical triage facility where the team’s nurse can provide onsite care for people they encounter in the field.

The $95,000 van has the capacity to hold multiple people at once and is stocked with medical supplies like Narcan, a nasal spray given to people to reverse the effects of an opioid overdose.

Adding a third team could help extend those services to weekends and also help shoulder the load of what’s expected to be an increase in calls now that calls placed to the city’s emergency lines will be rerouted to REACH teams.

Teams originally worked five days a week from 7 a.m. to 5 p.m., according to the city, with after-hour calls being directed to a voicemail that advised calling 9-1-1. Colopy said Monday that between 2018 and 2020 the city received over 12,000 calls regarding homeless encampments.

Colopy said the city’s efforts to do outreach through the REACH teams and other methods, though, need to be joined by willing landlords who can help the roughly 500 homeless individuals who have housing vouchers by accepting and allowing them to sign a lease for a rental unit.

City housing choice vouchers provide a set amount of the monthly rent based on ZIP code with tenants expected to pay 40% of their income with the city’s housing authority paying the difference. But if a tenant has no income, Duncan said the full amount is typically covered.

Colopy called on property owners to step up and accept those payments.

“If you are a landlord please help and call the housing authority and sign up to participate,” Colopy said. “You can make a very big difference as these people have the opportunity to be permanently housed with your support.”