COVID-19 is spreading through the ranks of the Long Beach Police Department at an unprecedented rate, infecting 45 employees in about five weeks, according to police officials.

The surge has alarmed departmental leadership and prompted them to warn officers for the first time that they could be disciplined for not wearing face coverings on the job.

Since early in the pandemic, police officials say they’ve encouraged officers to wear masks, but that encouragement had not been universally embraced within the department. As recently as last month many officers widely seemed comfortable going maskless, even around supervisors.

A large group of Long Beach police officers after a training exercise in the Long Beach Convention Center.

The department decided the large-scale exercises were critical in the runup to Election Day. Police officials did not want a repeat of the department’s widely critiqued performance on May 31, when officers struggled to respond to widespread looting during a massive protest in Downtown Long Beach.

After the training ended, Luna said he spoke to the officers for about 10 minutes to thank them for working extensive shifts and participating in the riot-response drills.

In an official group picture, most of the hundreds of gathered officers are shown wearing masks. But even then, some are not. It was not clear how long the officers were standing in close proximity without masks, but officials say they have consistently told officers to wear face coverings.

“Yes, we took this picture, yes we were in this warehouse, but the intent behind it wasn’t to impact anybody’s health,” Luna said. 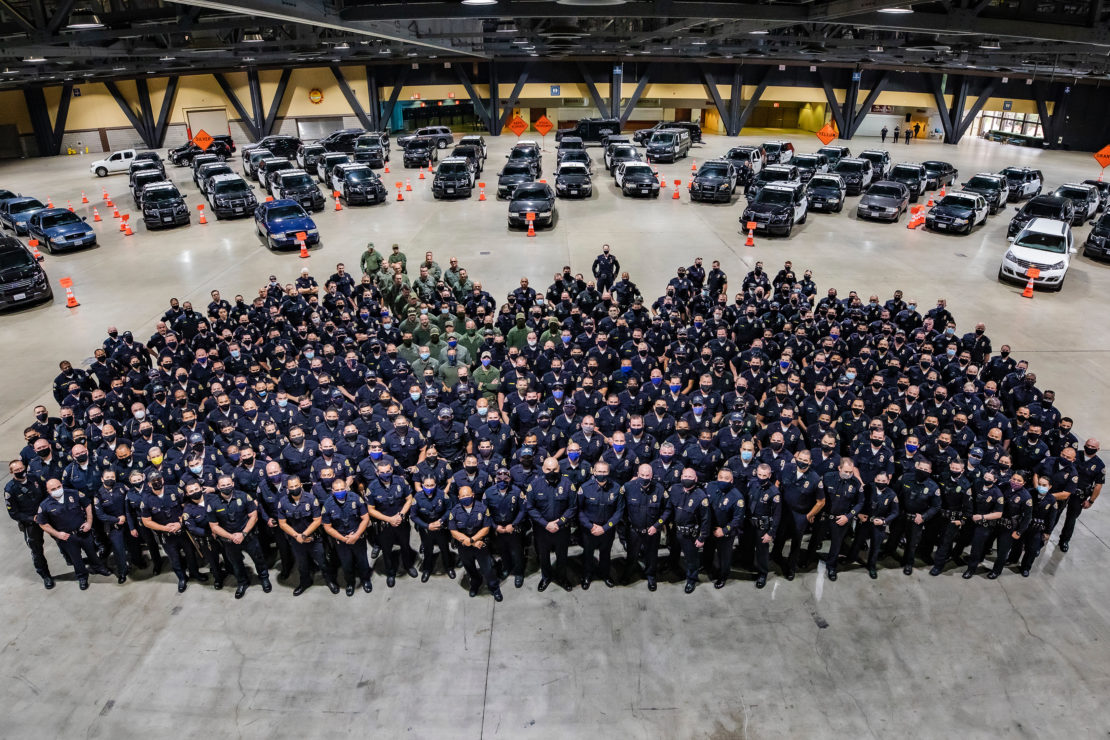 Long Beach police provided this photo of the group of officers taken by the department.

One officer at the gathering, who asked not to be identified for fear of retribution, said some of them had been instructed earlier in the day to remove their masks because they had symbols on them. The LBPD barred officers from having any kind of insignia on their masks after some wore ones with the controversial “thin blue line” flag.

In the weeks following the training, COVID-19 cases in the department began spiking, as they have across California. Some officers passed around photos from the gathering, calling it a “super-spreader” event that undermined the department’s message of caution, according to a person included in those discussions.

Police say they haven’t linked any of the rising COVID cases specifically to the gathering, but acknowledge that a lack of masks in police facilities appear to have contributed to the recent spread.

Chief Luna said the department’s contract tracing suggests that infections have been rising, in part, because employees were “not wearing face coverings inside the building.” But, Luna added, many employees also appear to have contracted the virus from their families.

In total, 72 officers have tested positive for COVID-19 this year, although none have become seriously ill, according to the chief.

The fact that 45 of those have come since Nov. 1 marks a significant acceleration. Eleven of those cases were confirmed just in the span of three days over the weekend, police said.

The figures include four staff members at the Long Beach Jail who tested positive for the virus, leading the department to either transfer or release approximately 20 inmates.

“Our numbers are high,” Luna said in an interview Monday. “I’m very uncomfortable with where they’re at.”

To try to bring the outbreak under control, the department notified officers on Nov. 19 that they could be disciplined for not wearing masks. The first offense would bring a written warning. Any further infractions would trigger the “progressive discipline” process, which can include everything from retraining to suspensions, demotions and ultimately dismissal.

In a memo to the department, Luna said the order was “in accordance with the most recent State and City Health Orders” requiring employees to wear masks unless they were alone in a vehicle or office.

“Whether or not to wear a facial covering is not optional and we ask that you abide by this new guidance,” he wrote.

Luna’s announcement came as the state and city recently tightened mask mandates—ordering everyone to wear a mask outside their home in almost all cases. But those changes merely built on a face-covering mandate that had been in place since June.

Despite months of pleas from public health officials for strict adherence to that mandate, the department resisted putting the threat of discipline in place until last month—relying instead on voluntary compliance from officers.

“It’s kind of a difficult thing to say, ‘Hey, wear a mask all the time and deal with the health crisis and public safety,” Assistant Chief Wally Hebeish said. “But if you go back to even April when this first started, we always encouraged employees to wear their PPE.”

“You know what, we’ll assess that,” he said Monday.

In hindsight, the chief said, he also would have handled his Nov. 5 speech and the training group photo differently.

At that point in November, COVID-19 cases in Los Angeles County were beginning to increase, and days earlier, Long Beach had cracked down on gatherings outside bars and restaurants along Pine Avenue.

But, Luna said, the department didn’t grasp the threat of the renewed surge until the next week when the state of California issued a travel advisory and health officials intensified their plea for everyone to avoid Thanksgiving gatherings.

“All that stuff started coming out right after that,” Luna said. “And that started to really scare us and we started to actually reinforce, even within our department, ‘Hey, we’re going to wear face coverings; we’re going to absolutely follow this health order.’”

Local health officials said they couldn’t comment on whether the group training in November and Luna’s appearance violated any health rules.

“The City of Long Beach Department of Health and Human Services does not oversee Police Department operations and cannot speak to the nature of this gathering,” the health department said in a statement.

As Long Beach and Los Angeles County are in the worst stretch of the pandemic yet, the statement re-emphasized the need for everyone to wear a mask when around anyone outside his or her household.