In the wake of Long Beach’s massive protest on May 31, Police Chief Robert Luna came under fire from business owners, TV commentators and many viewers as the rally against police brutality was overtaken by looting and vandalism, some of which was broadcast live by local news stations.

But on Tuesday, when Luna made his first appearance before the City Council, he escaped sharp questioning. Instead, he was mostly praised for his leadership.

“I had no idea how many really skilled Monday-morning quarterbacks we have all around us, including myself: There’s a lot of things that we think, ‘I should have done this, we would have done that,’” Councilwoman Suzie Price said during the meeting. She applauded Luna for adapting to the changing realities of the largely peaceful protests that would follow Sunday’s turmoil.

But behind the scenes, in private, the tone has been starkly different. The chief’s performance during that first night of protests has come under criticism from some local officials and within the ranks of his own department.

City Hall insiders have complained that they weren’t given enough information about the department’s preparations beforehand. They say they were told only that police had the situation under control and were confident of the city’s safety, even as protests in nearby cities had turned violent.

“The air of confidence was palpable” and ultimately misplaced, according to one city council member, who requested anonymity to discuss private conversations.

Only one council member, Jeannine Pearce, pressed Luna during Tuesday’s session, asking the chief when he’ll provide a full accounting of the damage caused and a breakdown of people arrested, which Luna said he could not do until the data is fully tallied.

After the meeting, Pearce said in an interview that some members of the council are frustrated that the police department, unlike other city departments, often fails to deliver data to council members when it’s requested.

Pearce said that frustration wasn’t on display Tuesday because of an unwillingness by officials to publicly criticize the police. The council, she said, is “like the family that’s not allowed to air our dirty laundry.”

“It’s the culture to deal with the hard things in closed sessions. But publicly, we are to thank our officers, thank the chief and just know they are listening and doing better.” 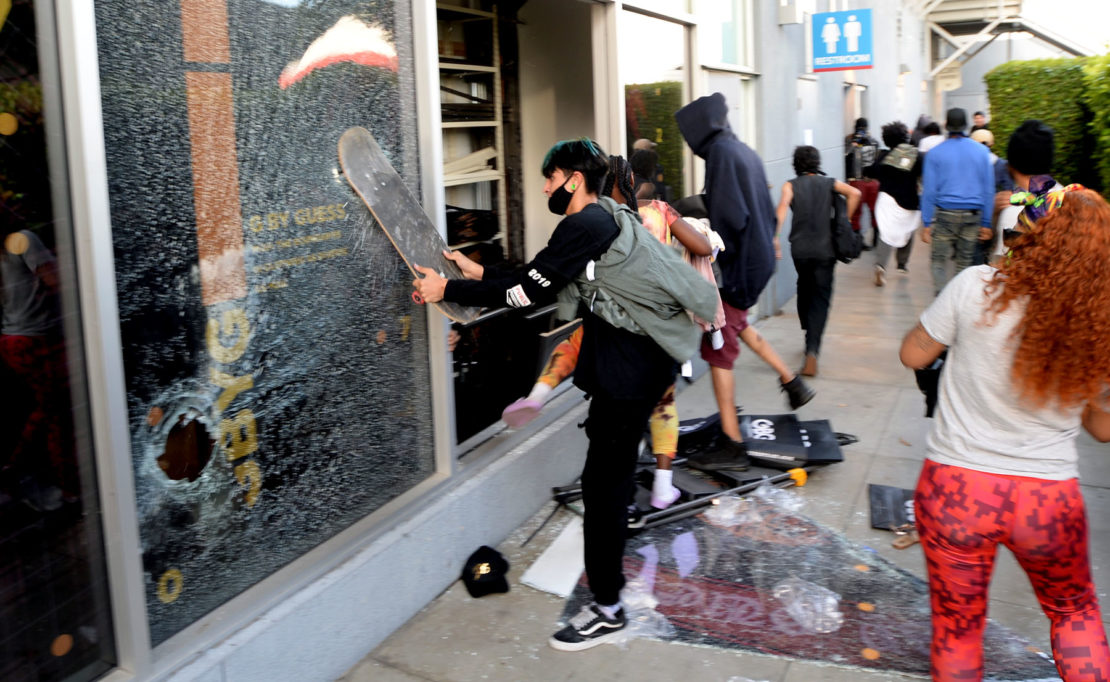 A looter smashes a window with his skateboard, at Forever 21, at The Pike Outlets. Photo by Stephen Carr.

Mayor Robert Garcia has also defended the department forcefully in public, saying it did a “fantastic job.”

Some councilmembers said the reason they didn’t challenge the chief more aggressively was because they weren’t prepared to do so. Councilman Daryl Supernaw said he wasn’t expecting a 45-minute Q & A session when Luna jumped in to address a question from Pearce on an agenda item about recovering from the unrest.

For his part, Luna took the opportunity to again defend his actions, including his mistaken belief that the Sunday night protest would be small, peaceful and limited to the area around LBPD headquarters.

“I can almost tell you that based on the information we had, we actually overstaffed based on what we thought was going to happen,” Luna said.

He said the department mobilized hundreds of extra officers, but did not shift to maximum deployment, as the LAPD had earlier done, until the theft and destruction spun out of control.

As looting began at The Pike that Sunday evening, scores of Long Beach officers were still tied up with protesters on Pine Avenue, where police had formed a skirmish line and ordered the crowd to disperse after some people started vandalizing police cars and hurling bottles.

It wasn’t until the chaos was well underway at 8:45 p.m. that Long Beach moved to enlist the National Guard after exhausting all the available aid from nearby police agencies, city officials said Tuesday.

By the time officers had dispersed most protesters and the National Guard arrived around midnight, TV cameras had already broadcast footage of looters easily escaping from cops—sometimes with anchors questioning Luna as the crime unfolded.

Luna later canceled all days off for his officers. That, in combination with National Guard troops, helped police facilitate more than 20 other protests since May 31, Luna noted. 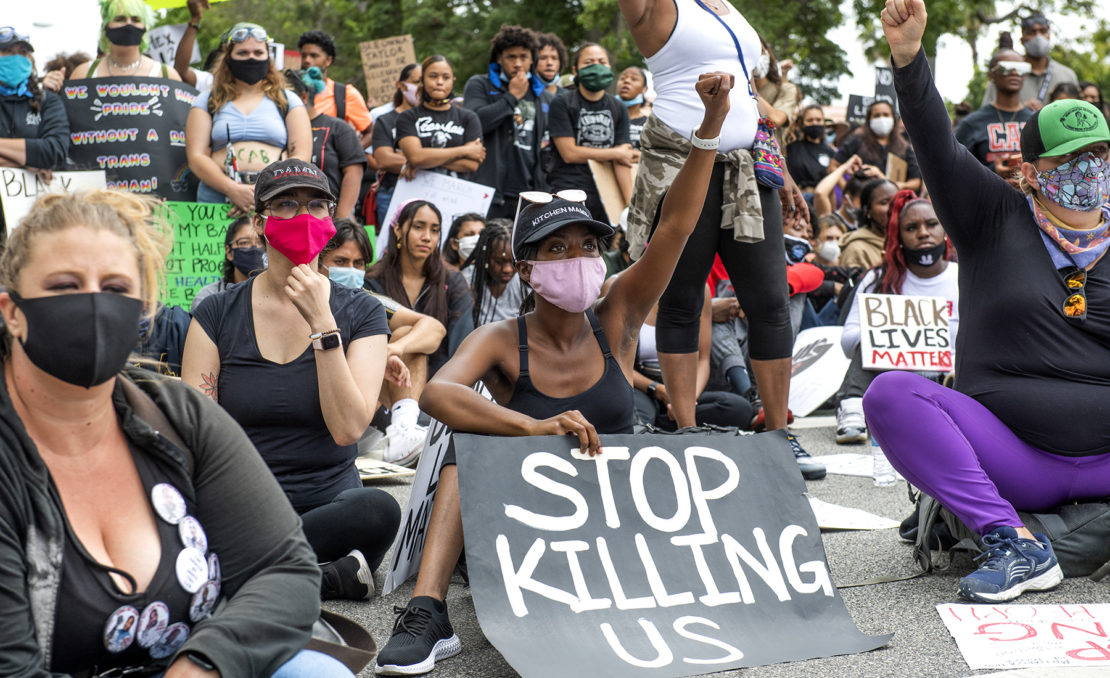 Protesters demonstrate in front of the Lakewood Sheriff station calling for police reforms in the wake of George Floyd’s death. Photo by Thomas R. Cordova.

Although the chief praised his officers during his Tuesday appearance before the council, he acknowledged the department did not adequately stop widespread damage during that first night of protests.

“And no-one’s more upset than they are—other than probably the business owners themselves who lost a lot that day—because they feel like they should’ve done a better job of protecting them, and so do we,” Luna said. “So I guess I can kind of wrap that up by saying our biggest win that evening was not having anyone get critically injured or killed, but our biggest disappointment was feeling that we failed some of our individual business owners.”

Luna’s preparedness has not only been privately criticized by local politicians, but also by front-line officers. They say they felt outnumbered and outmatched by opportunistic thieves and members of the crowd, who seemed to be trying to provoke police by throwing rocks and fireworks, 3 police sources told the Long Beach Post.

“They were way more organized than we were,” said one officer, who, along with the others, asked not to be named for fear of reprisal.

The officer said police on the ground were given contradictory directions of how aggressively to confront looters and protesters, a misstep that prompted apologies from command staff in the days afterward.

By then, frustration in the ranks had grown so palpable that some officers were passing around a picture of LA County Sheriff Alex Villanueva standing with Long Beach officers in riot gear, who were not mobilized at the time. Why, they’ve asked, wasn’t it their chief who was there?

The strongest criticism of the police department’s tactics on May 31 has come from business owners—and it has not been expressed only behind closed doors.

They say the city placed concrete barricades around police headquarters and barriers to shut down pedestrian and vehicle traffic along a tony stretch of 2nd Street in Belmont Shore.

Businesses there were spared any major looting, with only 2 stores immediately reporting damage. But business owners in other areas were left wondering why they were left unprotected. 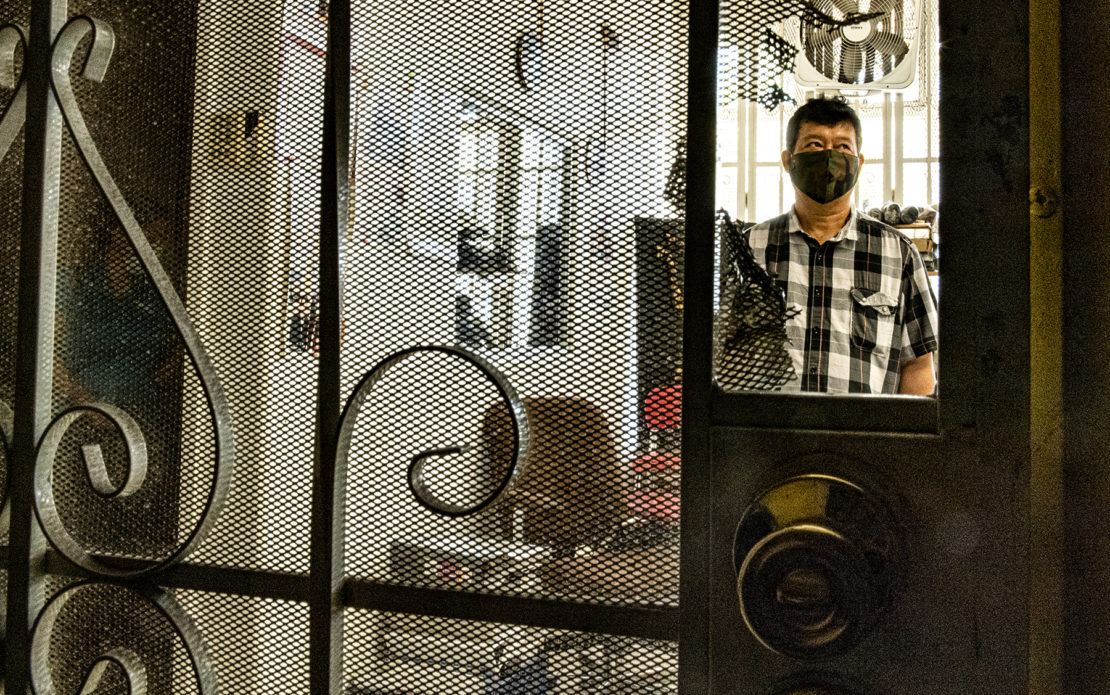 Jerry Theng, 50, is seen through a security door that looters broke through as his business was looted Sunday in Long Beach, Wednesday, June 3, 2020. Photo by Thomas R. Cordova.

Jerry Theng, owner of LB Jewelry Supplies, said he lost about $100,000 to $200,000 after looters broke in. His business was one of about 11 that were hit in the Midtown District.

The Downtown Long Beach Alliance estimates about 70 businesses were looted in its district, where the damage was most concentrated.

“It was so hard to watch my neighboring businesses and friends’ places get broken into and destroyed,” said Carl Dene, owner of Michael’s Downtown pizzeria on the Promenade. “Cops stood there and did absolutely nothing. Why the National Guard didn’t get here until midnight is beyond belief knowing what we knew was coming.”

Dene said his business was not damaged but after the looting and lack of police action “we now understand that from now on we have to take matters into our own hands and protect our own businesses.”

Stephanie Rivera and Crystal Niebla contributed to this report.