Despite the city’s success in administering COVID-19 vaccines, some of Long Beach’s lowest-income ZIP codes continue to lag behind in vaccination rates, with one area’s rate almost 43% lower than the city as a whole.

But five of the city’s 11 ZIP codes are still below 50% with just three weeks until June 15, when most of the state’s pandemic restrictions are expected to be eased.

The ZIP code with the lowest percentage of its residents vaccinated is the 90813, which extends from Cherry Avenue to the Port of Long Beach with Pacific Coast Highway and Seventh Street serving as its northern and southern borders. Just over 36% of eligible residents in that ZIP code have received at least one shot, according to data from the city’s health department. Long Beach’s four wealthiest ZIP codes all have over 59% of their residents vaccinated. 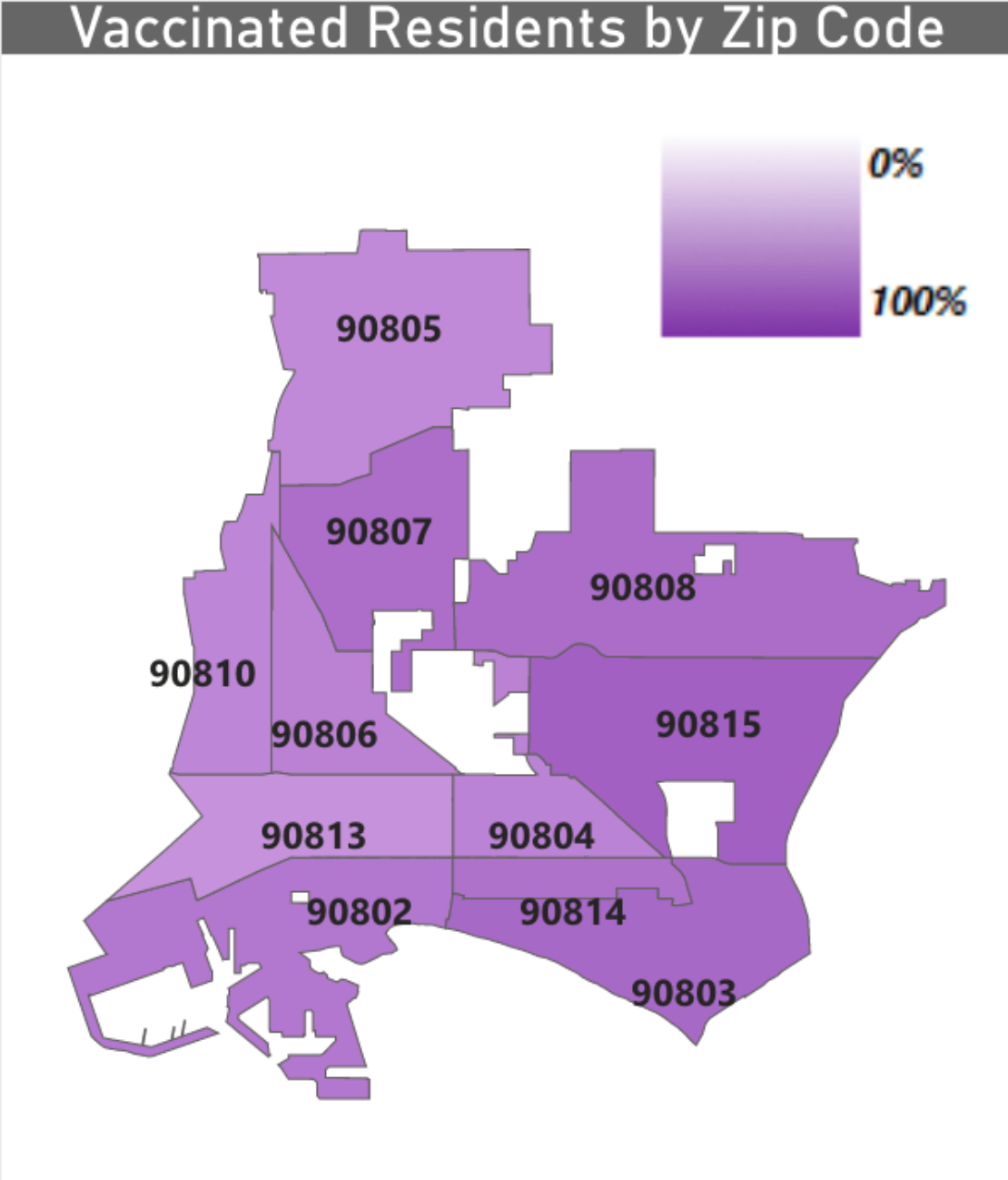 A screenshot from Long Beach’s vaccine dashboard as of May 26, 2021.

The 90813 is predominantly Latino and low-income with nearly all of its census tracts having at least a quarter of households below the poverty line, according to city data. It’s been identified as a “hard-to-reach” community by the city, which has deployed mobile clinics to McArthur Park and Washington Middle School in recent weeks.

The Los Angeles Times reported this week that vaccination rates grew the most between April 20 and May 20 among Latino residents in Los Angeles County, but that group continues to lag behind others. In Long Beach, Latinos make up 43% of the city but just 29% of those who have been vaccinated. White residents are 28% of the population but represent 32% of those who have been vaccinated.

Sandy Wedgeworth, the city’s public health emergency management director, said the city is working hard to meet hard-to-reach residents where they are, even announcing an evening clinic this week to be held at Long Beach City College’s Pacific Coast Campus.

The Washington Middle School site has the capacity to vaccinate 300 people per day, Wedgeworth said, but the number of people showing up each day has rarely reached 50. Slow starts have been common for the city’s mobile clinics before they develop momentum through word of mouth, she added.

“People have concerns and haven’t had all their questions answered,” Wedgeworth said. “We’re really trying to figure out the education piece around this.”

Wedgeworth said low vaccination rates in some parts of the city are much more complicated than people being unsure of the vaccine. There are other issues like trying to schedule a shot around work, transportation issues and concerns that the usually mild side-effects of the second dose could make a person miss a day of work.

“That could be the difference of paying rent or not paying rent, or food on the table,” Wedgeworth said.

Messaging has been an issue as well, Councilwoman Cindy Allen said, noting that some early signage the city used at mass-vaccination sites may have unintentionally scared away undocumented residents because of the way the signs asked for proof of residency.

“When you pull up and it says ‘Show your documents,’ that’s really scary,” Allen said. “We’re not asking for your documents; we’re asking if you live here.”

Allen’s office has worked to secure a pop-up clinic at the Museum of Latin American Art this week with a second date secured for second doses to try to boost vaccine access in the area. 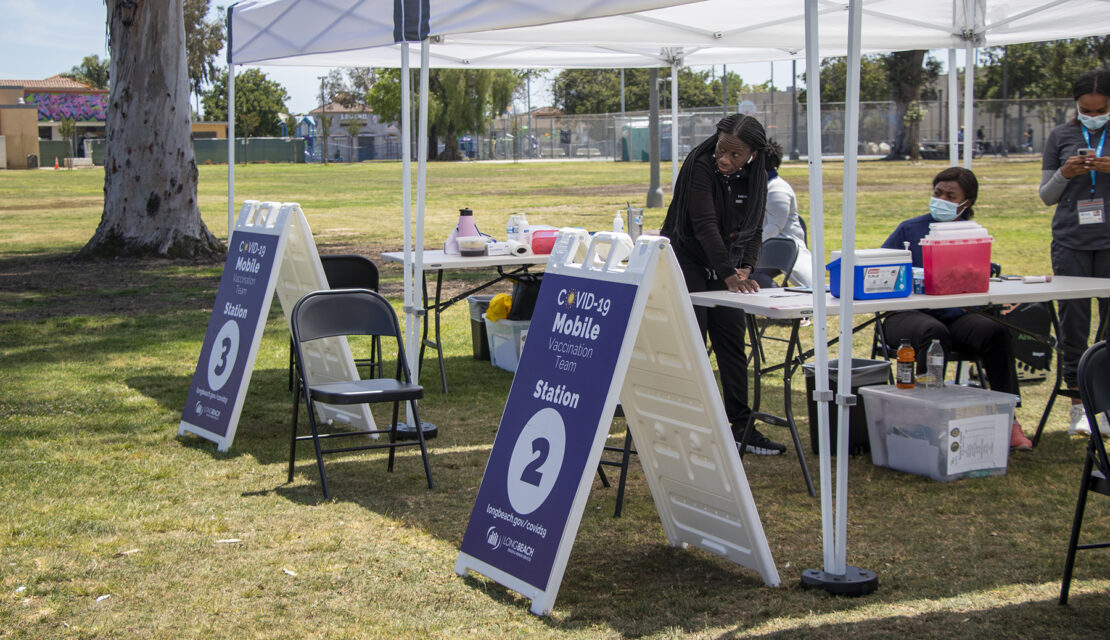 A member of a vaccination team awaits a new patient during a mobile vaccine clinic at the rear of MacArthur Park in Central Long Beach on Tuesday, May 25, 2021. Photo by Crystal Niebla.

Councilwoman Suely Saro agreed that fear is playing a part in lower vaccination rates, but she said hesitancy also stems from distrust of government in some immigrant communities, not just worries about the vaccine itself.

Saro is the first Cambodian to serve on the Long Beach City Council, potentially giving her a unique platform to address the city’s large Cambodian community, but she said her position of power has undermined her credibility to some extent. To be effective, she said, the message needs to be carried at the community level by pastors, local organizations, friends and family.

“I want to make sure we’re addressing people’s fear and concern,” Saro said.

Marlene Montanez, the associate director of the community organization Long Beach Forward, said distrust of the government is a factor but younger residents are also avoiding the vaccine because they don’t think they need it.

Montanez said that her team has been focusing on the 90813 and North Long Beach because of their virus case rates, which are higher than other parts of the city.

Because her team has been fully vaccinated, they’ve resumed door-knocking campaigns. Their strategy in those conversations includes acknowledging people’s fears, validating their questions while speaking their language and having the cultural context to understand their hesitancy.

“We really try to convey to them that this is a way that we can really protect each other and give them a sense of responsibility and how they can affect other people in the community,” Montanez said.

Long Beach Forward has partnered with the city to do advanced messaging for pop-up clinics with organizers like Montanez doing phone banking and knocking on doors to try and answer questions about the vaccine.

Montanez said her group is more focused on the quality of the conversations they’re having with residents rather than the number of shots being administered.

“Getting to a certain percentage would be great, but we’re not going to hit that mark if we don’t have these conversations with people and change the culture,” Montanez said.

The group and the city are hosting a pop-up next week in the Collins neighborhood in North Long Beach.

Wedgeworth said the city’s health officials are concerned that a reopening of the state on June 15 could lead to outbreaks in areas with lower vaccination rates like the 90813, and those outbreaks could ultimately affect anyone in the city because the vaccine isn’t 100% effective.

The city is working on localized incentives, too, like giving gift cards to local stores and restaurants to try and entice people in less-vaccinated parts of the city, Wedgeworth said, but ultimately some people won’t take the vaccine until they absolutely have to, like if they’re required for travel or to return to work, she said.