A day after Sunday night’s unrest in Long Beach, Mayor Robert Garcia said about 85 people were arrested while looting and vandalism spread across the city, but days later, the police department clarified that most of those people were released with a citation, not booked into jail as they would be in a typical arrest.

In total, 28 people were taken to jail between the hours of 3:30 p.m. Sunday and 10 a.m. Monday, mostly on burglary and looting charges, according to booking records. The remainder, 56 people, were briefly taken into custody before being cited and released, meaning they were given a date to appear in court.

LBPD spokesman Ivan Garcia said the department still counts those citations as arrests, which is why the mayor included them in the larger number he announced Monday.

But it’s unclear what the citations were for. On Saturday, the department declined to provide details on them, saying it would require approval from the City Attorney’s office and possibly a formal public records request. Police departments are legally required to promptly release arrest information.

Most of the people arrested—15—were not residents of Long Beach. Local officials have repeatedly said they believe organized groups of criminals were responsible for the bulk of the crime Sunday, using the massive protest as cover to loot and steal.

Police have also come under criticism after photos and live video showed the looting as it unfolded, sometimes with officers watching from nearby. In some cases, the thieves pulled up cars to load with stolen goods before taking off. City officials denied the notion that officers stood by as people looted local businesses.

“The direction from me through our command post is to make as many arrests as we can,” Luna said Sunday night as the turmoil unfolded. “But as this night wears on and we start enforcing the curfew and get even more resources than what we have, those [arrest] numbers, I assure you, will go up. And the mayor said it earlier, if you’re coming to this city to involve yourself in either looting or committing crimes or hurting people, we’re going to come after you, we’re gonna to put you in jail, and we’re gonna get you prosecuted. We will not accept this in this city.”

So far, the Los Angeles County District Attorney’s office has charged 3 people with felony looting in Long Beach. Other cases have been referred back to police for more investigation, thrown out because of a lack of evidence or referred to local prosecutors for possible misdemeanor charges, the DA’s office said. 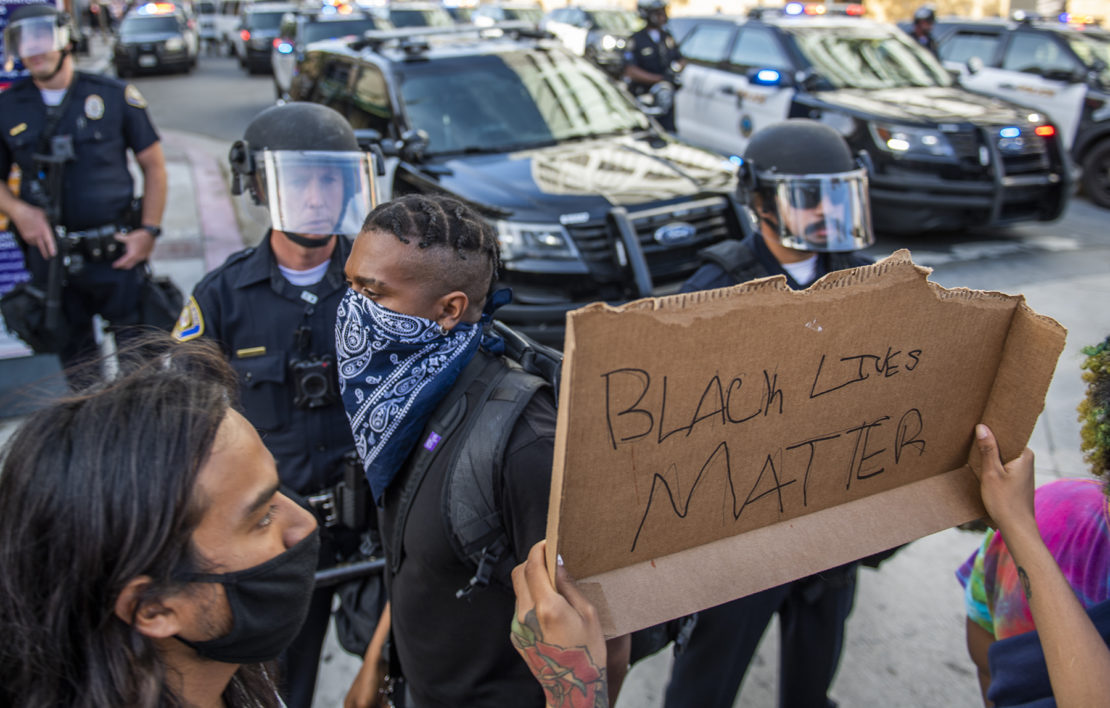 A demonstrator holds a sign in front of the Long Beach police during a protest of the death of George Floyd. Photo by Thomas R. Cordova.

Community members and protesters have tried to keep rioters and looters from overshadowing the message of the protest.

Long Beach native and activist Manisha Penesa said she saw that police were not moving on looters, neither to arrest nor deter, so she and other peaceful protesters took it upon themselves to stand in front of businesses to keep people out. She said the protectors would ask potential looters if they were from Long Beach.

“They were like, ‘No, we’re from Compton,’ or ‘We’re from LA,’ or some other town,” Penesa said. “So it was outsiders coming over here and pissing on our home.”

Penesa denounced actions taken by police on Sunday, explaining that officers formed lines against those peaceably assembling, while looters ransacked stores yards away.

“It’s our community. We have to protect it,” said Penesa, who lives 3 blocks from the Men’s Suit Outlet that was burned down Sunday night. “We have to make sure that we’re thriving together. That’s not what [looters] were doing … We were telling them the looters were not with us, ‘We’re not rioters,’ and we’re still getting shot.” 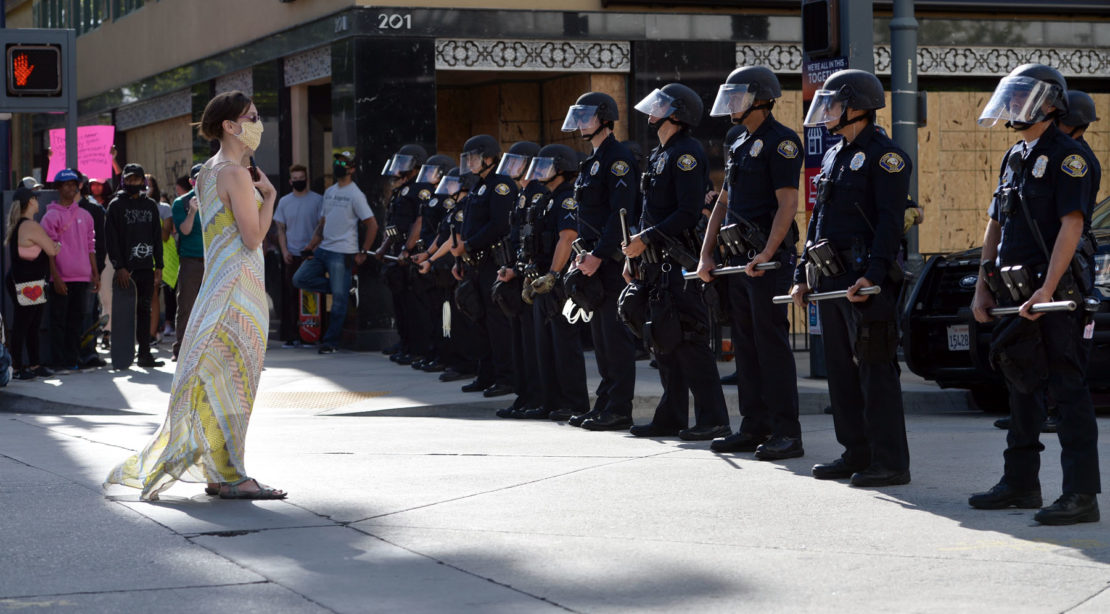 A protester stands in front of LBPD officers at Pine Avenue where officers formed a skirmish line on Sunday, May 31, 2020. Photo by Stephen Carr.

Police officials have said the protests required a large commitment of police resources to keep the protesters and public safe when demonstrators started blocking streets. They also said officers who fired less-lethal foam rounds into the crowd were responding to agitators who were throwing rocks and lighting off fireworks.

Police are now looking for help tracking down looters. They’ve launching an online portal where residents can submit photos and video of people looting, vandalizing, starting fires, burgling or assaulting.

“We will not ignore the actions of criminal opportunists that have incited violence and caused damage in our community,” Luna said. “Our community partnerships are critical to ensuring public safety and we are asking anyone with photos or video of criminal activity to utilize this new portal.”

Police want evidence of the criminal activity that shows clear or partially-clear visuals of suspect descriptions, faces, identifiable clothing or accessories, license plates and vehicle descriptions, and locations and approximate times of the incident.

“Once received, evidence will be reviewed and assigned to the appropriate investigative detail for further review,” the department said. “All attempts will be made to link the submitted evidence to current crime reports and investigations.”