Long Beach and Los Angeles County health officials said they will soon require people to wear face coverings when they’re around other people indoors, regardless of their vaccination status.

The city’s health officer, Dr. Anissa Davis, issued a statement Thursday evening saying that Long Beach has seen a 288% increase in average daily cases over the past two weeks. She noted that the Centers for Disease Control now considers the county and city as an area of “substantial” virus transmission.

“Given these numbers, the City of Long Beach will align with LA County in requiring masking indoors regardless of vaccination status,” she said, adding that more details about the order will be forthcoming.

County Health Officer Dr. Muntu Davis said earlier that the county is “not where we need to be” in terms of vaccinations against the virus, as evidenced by seven straight days of new case numbers that topped 1,000. On Thursday, the county reported 1,537 new infections, the highest number since early March.

The positivity rate in Long Beach is currently 3.8% and the case rate per 100,000 residents is 7.5, the highest since April 4, city officials said Thursday.

In an interview Wednesday, Kelly Colopy, the city’s health director, said 84% of the city’s new cases are among those who are not vaccinated against COVID-19. And in the statement on Thursday, officials said 12 of the 14 Long Beach residents who are currently hospitalized with COVID-19 are unvaccinated. 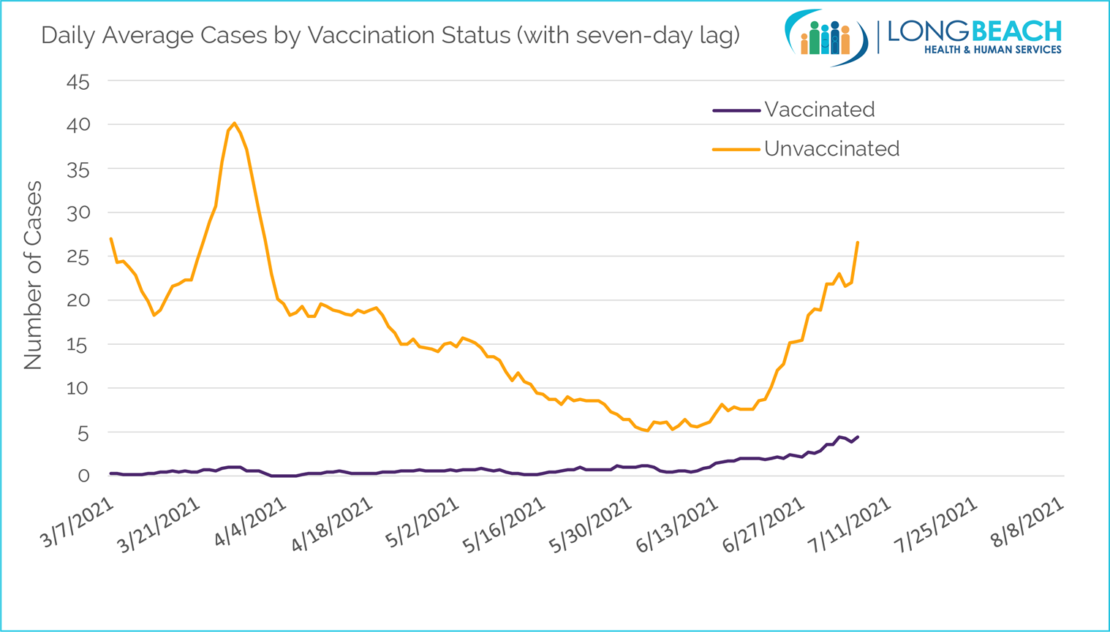 “We continue to see a strong effect of the vaccine against all the variants,” Colopy said. “The really high percentage of effectiveness is against hospitalization and death.”

The state of California lifted its mask mandate and other restrictions on June 15 and abandoned its color-coded system of classifying the risk of COVID-19 in various health jurisdictions across the state.

At the peak of the pandemic in January, dining indoors was banned altogether, and capacity was significantly limited in other indoor settings such as grocery and retail stores. Face coverings were required in public.

Davis, the county health officer, said Thursday that residents will still be allowed to dine indoors but will be required to wear a mask when waiting for a table or not eating.

All the details of the new order weren’t immediately available. Health officials said it would be posted on the LA County website by Friday.

Asked whether he was ready for public pushback to the new mandate, Davis said the announcement was the right move.

“We have to get these numbers down,” he said. “This is not the same situation it was on June 15 … otherwise we’re going to be in a situation where we have to put stricter measures into place.”

Health officials with the county and city continued to express exasperation that more residents are not getting vaccinated, with numbers especially low among young people, and Black and Latino residents.

In Long Beach, officials said 43% of eligible Black residents and 55% of Latino residents are vaccinated compared to more than 65% for other groups.

“We know that this is so preventable,” Colopy said of contracting the virus and the risk of severe illness.

She said the city continues to develop ways to reach people and to communicate that the vaccine is safe and effective.

For information on how to get vaccinated, click here.

Editor’s note: This story has been updated with a statement from the Long Beach health officer.