In her home just off the busy 710 Freeway near Jordan High School, Marche Robinson said much of her life revolves around managing asthma.

A native of Compton and North Long Beach, Robinson has asthma, as do all of her five children, who range in age from 16 to 27. Three of her grandchildren also have asthma, she said, adding that her 7-year-old grandson is unable to attend school because his condition is so severe.

“The trucks keep going by on the freeway and polluting the air, and we can’t breathe in our home,” she said. “It’s no joke. Something needs to be done.”

Robinson was one of several concerned community members to attend a town hall meeting this week on ocean shipping pollution hosted by Rep. Alan Lowenthal, D-Long Beach, Pacific Environment and the Long Beach Alliance for Children with Asthma.

The meeting at the Hyatt Regency in Downtown Long Beach was a chance for Lowenthal to showcase his new bill, called the Clean Shipping Act, aimed at cutting air emissions in the shipping industry. Lowenthal, a longtime politician who is retiring this year, said he’s been pushing to clean up the ports of Long Beach and Los Angeles for decades since he first saw the soot in residents’ windowsills while campaigning as a Long Beach city councilman.

He said he is now seeing growing support from the ports and lawmakers as climate change intensifies. 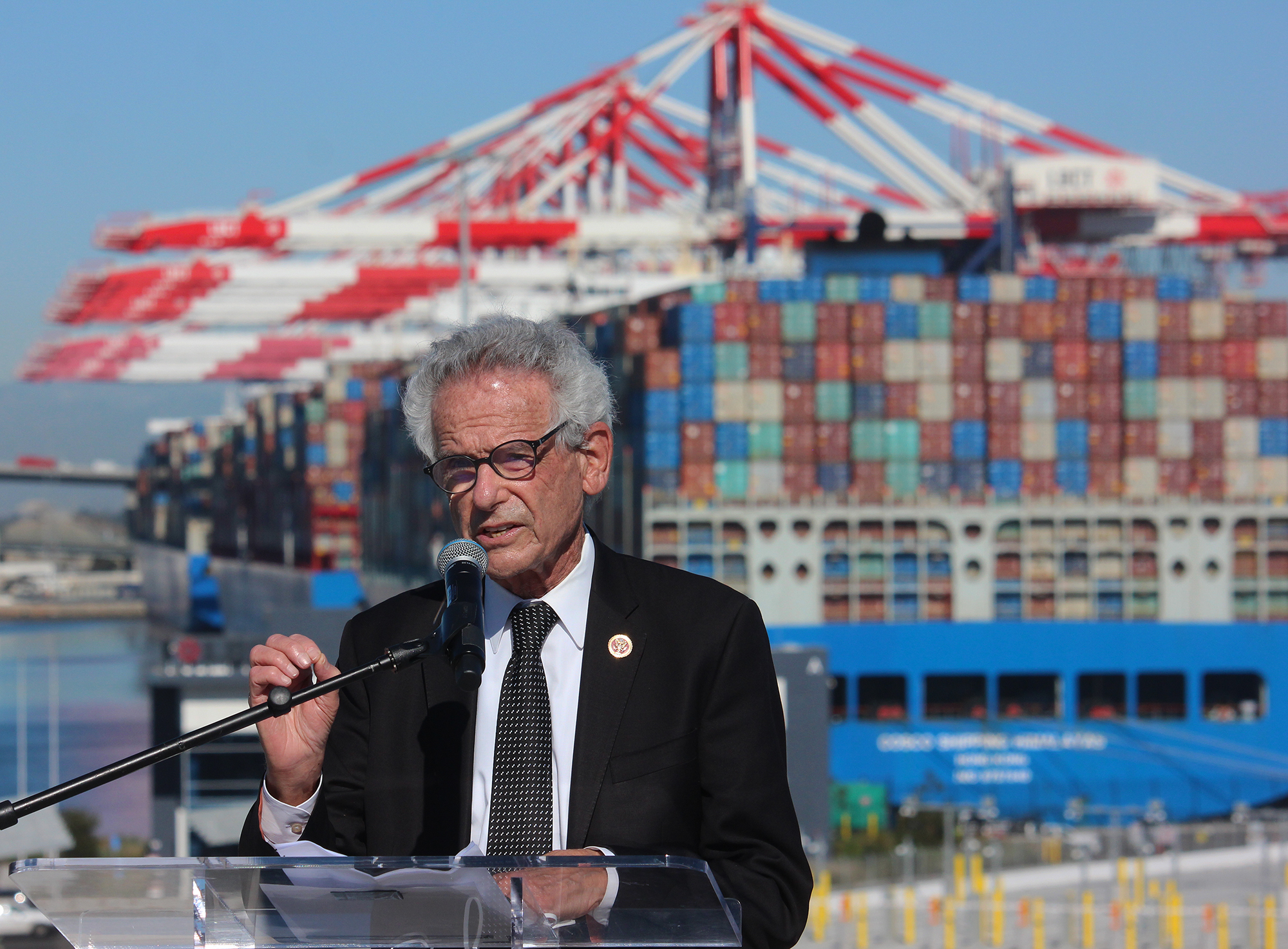 Congressman Alan Lowenthal speaks during a press conference at the Port of Long Beach Tuesday, Jan. 11, 2022. Photo by Brandon Richardson.

Under the bill, introduced in July and co-sponsored by Rep. Nanette Barragán, D-San Pedro, the U.S. Environmental Protection Agency would set stricter carbon emission standards for fuels used by ships and would set requirements to eliminate in-port ship emissions by 2030.

The effort comes as the ports of Long Beach and Los Angeles, which bring in a combined 40% of United States imports, continue to see record-breaking cargo numbers, fueling pollution in a region choking with some of the nation’s dirtiest air.

Worldwide, the shipping industry emits one billion tons of climate pollution per year, according to the International Maritime Organization, the United Nations agency that regulates shipping. That accounts for about 3% of the world’s greenhouse gas emission, but experts say that number could reach 17% by 2050 as global trade increases.

The IMO has set a goal of reducing shipping emissions in half by 2050 compared to 2008 levels, but experts say the effort is not enough to reduce the worst impacts of climate change and doesn’t align with the Paris climate agreement.

With slow progress internationally, environmentalists are pushing for the United States to force its own regulations on shipping pollution, but industry leaders are concerned that some new regulations could lead to higher costs and a possible disruption to the nation’s supply chain.

Last year, the pandemic fueled an unprecedented global shipping bottleneck, leaving a backlog of containerships parked off the coast and spiking air pollution levels in vulnerable neighborhoods, like Long Beach’s Westside, which has long seen higher asthma and cancer rates.

A report from the California Air Resources Board found that increased cargo movement and congestion at the ports in March 2021 resulted in 14.5 extra tons per day of smog-causing nitrogen oxides and an extra 0.27 tons of particulate matter compared to pre-pandemic base levels. The increase was equivalent to exhaust from nearly 50,000 large diesel trucks.

Cargo ship emissions have since dropped from their peak in November 2021 and have remained close to pre-pandemic levels, due in part from a queuing system from Pacific Maritime Management Services requiring ships to wait further off shore, according to a June report from CARB. But the region still faces an increase in greenhouse gas emissions as the ports grapple with 28% higher cargo levels compared to 2019. 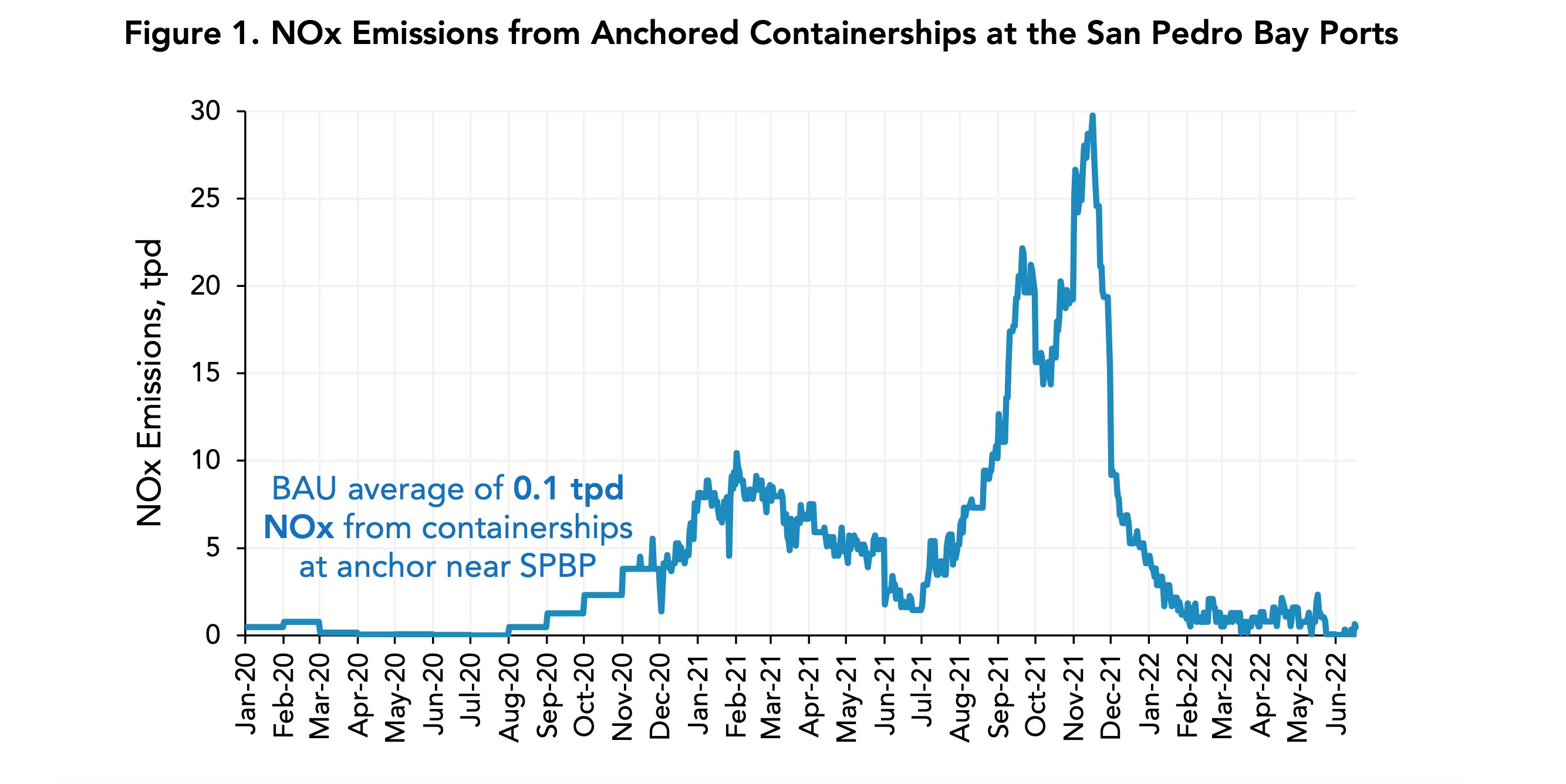 With green initiatives, the ports have made gains in reducing air emissions since 2005 base levels, but progress in recent years has slowed as the harbor complex continues to see record cargo numbers. The ports are working toward meeting a goal of deploying all zero-emissions cargo-handling equipment by 2030 and zero-emissions drayage trucks by 2035.

In one of the green efforts, the Port of Long Beach on Wednesday was slated to welcome Pasha Hawaii’s MV George III, the first container ship powered by liquefied natural gas to refuel on the West Coast.

Meanwhile, Lowenthal, who was elected to Congress in 2013, said he hopes his Clean Shipping Act will lead to clearer air in communities surrounding the ports. Lowenthal said he decided to introduce the bill this year after seeing support from the European Union and the IMO on pushing for change.

Though he’s set to leave office, he said he’s confident the bill will carry through.

“There will be many people who will support it,” he said.

“I just want them to do something soon,” she said.

‘You can see it. You can smell it. It’s dirty’: West Long Beach is choking on air pollution from cargo congestion