A housing and resource center for homeless individuals in North Long Beach originally scheduled to open earlier this month has been set back. The project is now on track to be operational in September, according to Health and Human Services Director Kelly Colopy.

The Atlantic Farms Bridge Housing Community project, at 6841 Atlantic Ave., is starting to take shape as utilities have been installed and furniture is being added, said Eric Lopez, the newly appointed director of Public Works, who worked on the project early on.

Completing and operating a project of this size–– a 2.5-acre complex with 125 emergency beds–– in six months was an “aggressive” ambition, Lopez admitted.

“To implement a project of this complexity is actually quite a feat,” he said. 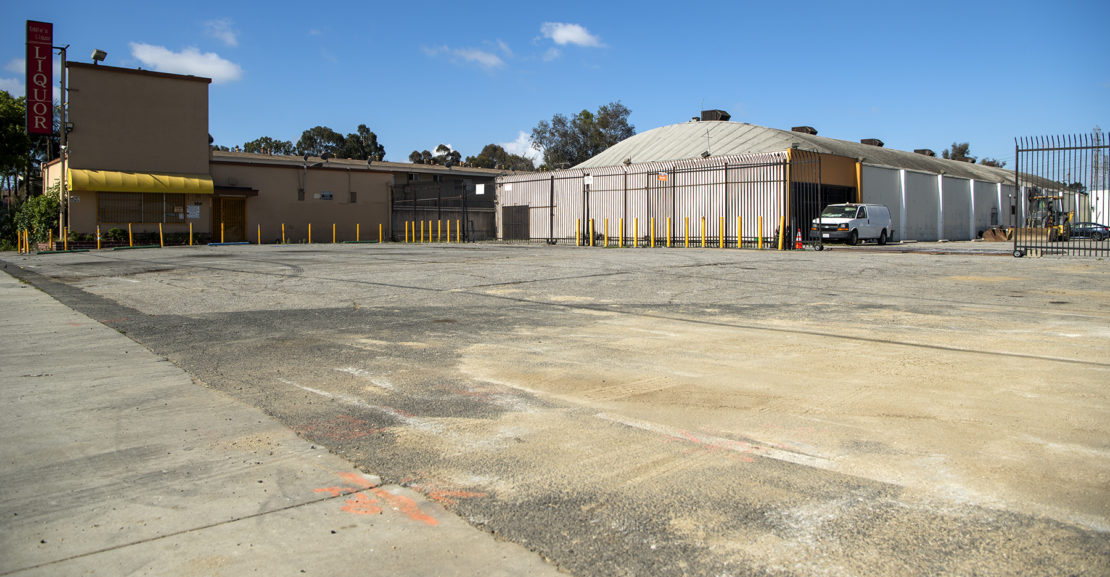 The homeless shelter was scheduled to open this summer in North Long Beach, however, the project has been pushed back. The liquor store pictured at left is now closed. Thursday May 14, 2020. Photo by Thomas R. Cordova.

When the council secured the location for the facility in December last year, revenue allocated via LA County’s Measure H was going to be used to fund the project, however, it came with a catch. The money had to be spent within a certain timeframe, prompting project leads to aim for a quick turnaround date.

When the COVID-19 pandemic struck, the city was able to appeal for an extension for the money’s use, Colopy said.

It cost the city $9.5 million last year to purchase the land parcels, with an additional $5 million in partial state grant money and the general fund revenue to pay for its construction.

When the project was in early stages, residents of the Hamilton neighborhood, where the property is located, as well as local community leaders and other stakeholders opened up their community to allow the facility to be developed.

It was agreed that the project would not be a typical homeless shelter such as the city’s winter shelter. Councilman Rex Richardson told the Long Beach Post the objective was to transition homeless individuals into permanent housing, and reintegrate them into a working society.

“It’s one of the rare opportunities in the city to really think big about redevelopment and about building more housing so it allows us to set the stage for a broader campus rather than think simply about a shelter,” Richardson said.

The city partnered with Volunteers of America to operate the facility. Colopy said the group’s members will begin training next month.

Although officials declined to provide an exact date for when the facility would be up and running, Colopy said they are planning to have a soft opening sometime in September that would abide by COVID-19 health orders.