Surrounding the polished concrete floors and plants hanging from the raised ceilings inside Open Air Vintage at Long Beach Exchange is a honeycomb display of nearly 200 colorful high-end Jordans, Nikes and limited edition Vans. The most exclusive sneakers rest on a bed of moss near the “sneaker garden.”

The center of the store is laden with vintage sports shirts from the 1990s, some displaying the names of NASCAR drivers who haven’t raced in decades. The back wall holds a display of vintage Dior and Chanel sandals that sits next to racks of new high-end streetwear.

Martaveous Holliday, 25, Savannah Dingman, 24, opened the store in June, with the couple hoping to cater to the growing market of luxury sneaker collectors who would normally shop in Los Angeles.

Holliday and Dingman knew they wanted to open an exclusive sneaker store somewhere in Long Beach and the pandemic helped them realize that Long Beach Exchange would suit them.

They spent a lot of time at the shopping center over the past year and a half, walking around and getting meals because of the shopping center’s expansive outdoor eating options and the limitations put on dining establishments to prevent the spread of COVID-19.

It was then that the couple noticed the very distinct styles—rare sneakers and vintage clothing—that were worn by other customers of LBX and knew that a store that catered to that could be successful.

“The amount of people we’d see with Dunks, Jordans, Travis Scott shirts, it was just crazy that these people were just naturally here to get food,” Dingman said. “We thought, what if we brought something like this to these people who are here already?” 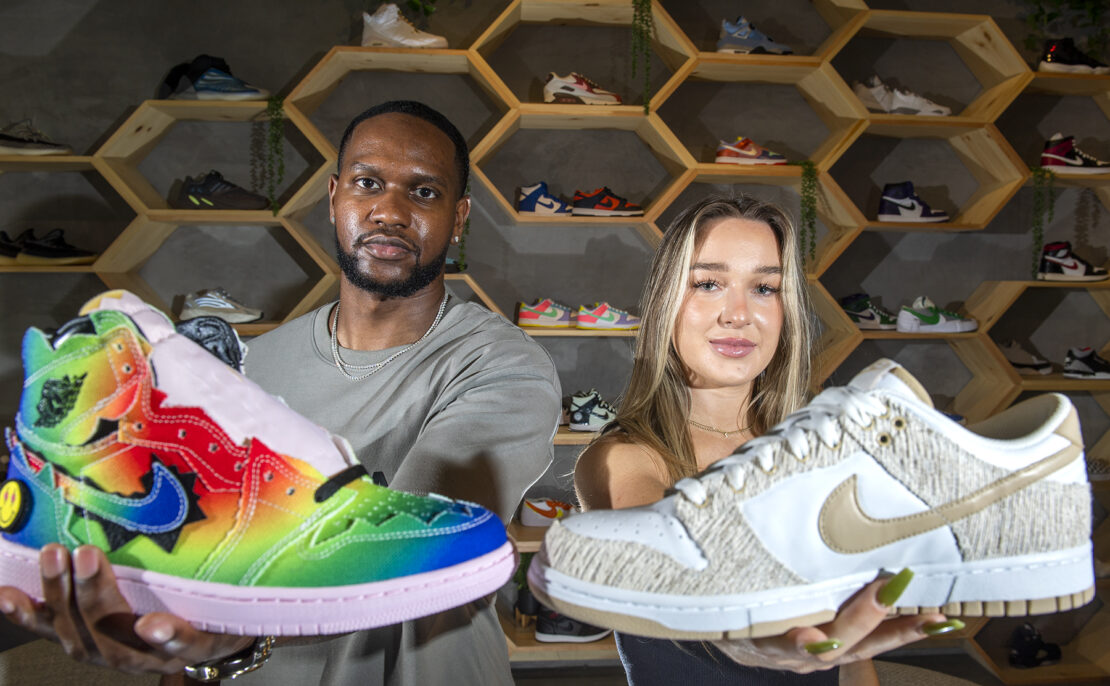 Their store is different from other shoe resale stores, which are often stacked with shoes from floor to ceiling in an effort to maximize floorspace, Holliday said. Open Air has a full storeroom but Holliday and Dingman opted to offer a more boutique experience at LBX.

“We didn’t want it to be too overwhelming,” Dingman said.

Opening a shoe store was hardly their focus when the two first started college. Holliday played running back and immediately went on to a Division I program at the University of Nevada Las Vegas while Dingman played soccer and studied to become a journalist.

Holliday bounced back to Santa Monica College, where an enrollment error helped stoked his interest in fashion. When he failed to sign up for a college algebra class, Holliday was declared ineligible for the season because he was one credit short to qualify to play.

He’d always been interested in fashion, having launched his own clothing line in 2016, and sitting out the season allowed him to take two fashion classes, which helped him think of what his future away from the football field would be.

“When I did that the thought crossed my mind that it was something that I would want to do in this lifetime,” Holliday said.

They began seriously discussing opening a store last May. In June, after nearly a year of negotiations and selling their vision to the property owner, the couple opened Open Air. Running the store is a full-time venture that includes staffing it and keeping up with new trends. The two explained that this store is not about what they like, but what people want.

There are Bad Bunny Adidas that can retail for $500 a pair, J Balvin Retro high-tops that can fetch upward of $900 a pair and Supreme Nike Dunks in barkroot brown that can sell for as much as $2,000, if you can find them.

“The shoes we sell are sold out in 10 seconds,” Holliday said.

A big part of the lightning-quick sell outs of certain styles of shoes has as much to do with collaborators, like Travis Scott, Kanye West and other influencers, as it does with robots.

Online bots have allowed individual buyers to purge inventories of new releases in the blink of an eye, consolidating limited release shoes into fewer hands, helping to drive up the resale prices.

The sneaker resale market has been estimated by many to be a billion dollar market and Holliday and Dingman’s shop hopes to cater to the growing niche of consumers who are willing to pay big money for a new pair of kicks.

There’s even a website that allows collectors and sellers to check the market value of a certain pair of shoes, which is often hundreds if not thousands of dollars over the retail price. The couple uses it to help determine both what they should be paying for shoes and what they should sell them for to customers.

The shoes are almost all dead stock, they explained, meaning they’ve never been worn, including never having been tried on. Dingman said that a dead stock shoe often means that only a few hands have touched the shoes, including their customers.

The remainder are near-dead-stock, which means they’ve been worn once. All of them are hard to find, and the store carries just a handful of sizes of each shoe, with some designs only having one size stashed away in their storeroom.

Holliday says the shop uses a rigorous process to ensure that the shoes they purchase are not fakes, a growing problem in the rare sneaker world.

Holliday pulled out a black light and scanned a $1,400 pair of “Chunky Dunky’s”, a collaboration shoe between Ben and Jerry’s and Nike, and shows that there are no odd coverups of splatter patterns of paint on the shoe, which confirms it’s from the Nike factory.

He shined a light through the sole of a Yeezy, a shoe put out by Adidas in collaboration with Kanye West, and explains that the sole is made out of patented material and fakes often are too dense for the light to be seen when you hold one against it.

Buying limited sneakers is less about the cost and has more to with the hustle, Holliday said. How’d you get them and where you got them are part of the story behind these sneakers.

For Long Beach sneaker collectors, the answer to “where” could be at Long Beach Exchange.