Private citizens joined forces with Long Beach Marine Safety in a daring rescue at sea Friday morning. The little survivor was a white dog, who had swum to a buoy and was bobbing there when a boater pulled her to safety.

Several people walking on Alamitos Beach near Downtown had seen the dog running frantically down the beach toward the water. They gave chase, but she leaped into the bay and swam off.

“We all made calls and did the best we could to get the dog out of the water,” said Iulia Vecerdea, who was trying to help corral the little dog. “It appeared that the dog ran away [from something]—we saw it getting in the water and swimming away.”

The chase may have spurred the dog to further panic. One person jumped into the bay after her but couldn’t keep up with her paddling. Another bystander got into his motorboat and drove it to the buoy where she had wound up.

Lifeguards in a Long Beach Fire Department boat pulled up just as the rescuer was lifting the frightened animal into his own boat.

Onlookers watch anxiously as a motorboat approaches the buoy and the stranded dog. Video by Iulia Vecerdea

The rescuer transfers the dog to the LBFD boat and then to shore and safety. Video by Iulia Vecerdea

LBFD Marine Safety Chief Gonzalo Medina was impressed by the dog’s stamina. He suggested Flipper as a good name for her.

“She was a really good swimmer!” Medina said. “She was several hundred yards offshore. We’d gotten the call [from one of the rescuers] and dispatched a rescue boat and lifeguard.” 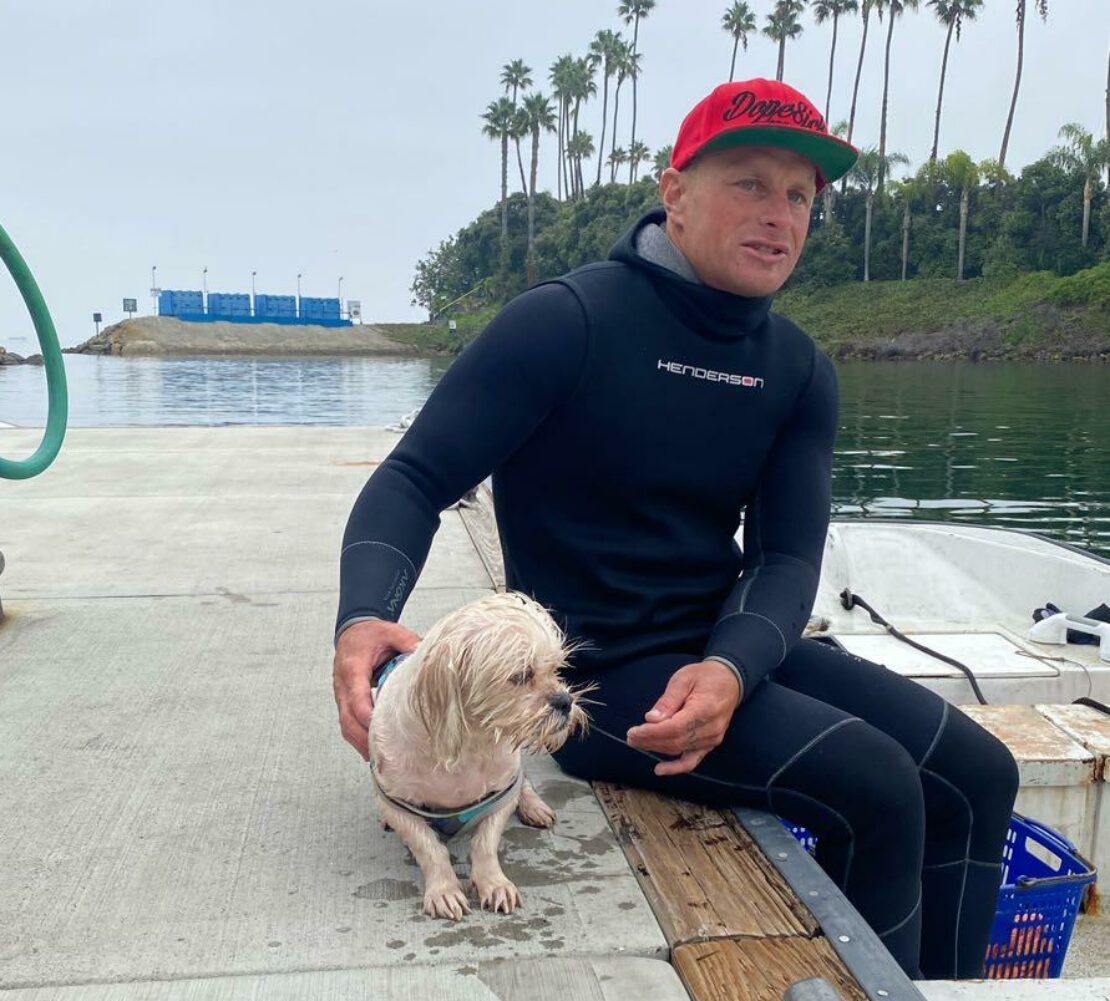 Medina praised the efforts of the lifeguards and the passersby, particularly the unidentified boater, pictured here with the dog. Photo by Iulia Vecerdea

The people who’d taken part in the rescue effort stood behind the fence separating the beach and the dock, clamoring to see the dog and expressing relief and delight at the outcome.

Long Beach Animal Care Services picked up the pooch shortly after. LBACS field director David Linn said that the dog appears to be a Shih Tzu mix, is about 2 years old and is female. She was wearing a gray sweater with the phrase “Ain’t no mama like the one I’d got” and small pawprints and hearts appliquéd on it. She does not appear to have been spayed.

LBACS volunteers Julie and Jodi comfort the little long-distance swimmer at the shelter. The dog doesn’t seem to have experience on a leash and seems bewildered at her situation, but she’s in good, loving hands. Video by Kate Karp.

Linn said that there is a four-open-day stray hold on the dog to see if the shelter can locate her owner. The shelter is closed Monday and Tuesday, so if no one claims her by Thursday, she’ll be eligible for adoption. More information on the lucky little girl is available here.