Eliot Lane is a tiny and intimate historic district  in the heart of Belmont Heights. It’s a one lane, one-way street running south from Colorado Street to Third Street with 30 homes in the block-long district, all built in 1923 by the short-lived Long Beach firm of Boland & Smith. The company went on a frenzied construction spree that year that included about 30 other homes in the surrounding area to accommodate workers during an employment explosion prompted by the boom times following the discovery of oil in nearby Signal Hill and the continuing and accelerating development in Long Long Beach and the port.

The new homes on Eliot Court, as it was first called, sold for about $2,100—adjusted for inflation, that would be about $34,000 in today’s dollars, but real estate, of course, has way outpaced inflation, and today those little homes on Eliot Lane can fetch upward of $800,000, packing a lot of asking-price into a little  square footage.

The homes on Eliot typically hover between 600 and 800 square feet and they generally have one or two bedrooms, unless owners have added on additional rooms—always in the back because, per historic district rules, they can’t be added on to the front or the top.

A home at 304 Eliot Lane has just gone into escrow (but you’re free to make a back-up offer) with a list price of $839,000. The home is diminutive—perhaps “charming” is the word we’re looking for—with just one bedroom and one bath in 650 square feet. Pound-for-pound, that passes the median Belmont Heights price-per-square-foot median price of $867 by almost $300 per square foot. 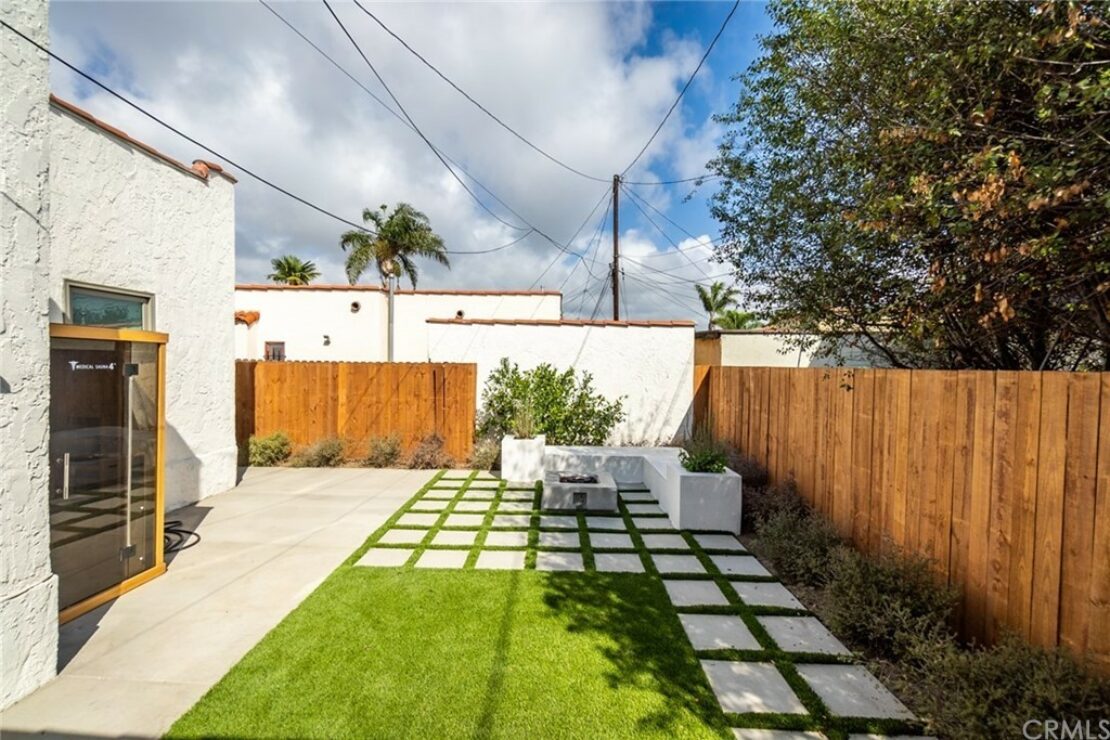 The backyard at 304 Eliot Lane makes for a cozy spot for a small get-together. Listing photo.

The neighborhood is, indeed, charming, with all of the original 1923 homes remaining in place as if time hasn’t marched on as it has elsewhere in the Heights. There is a marked uniformity, with the majority of the houses being Mission Revival in terms of architecture, with a few mini-Craftsman houses mixed in. And that uniformity was a key point that contributed to the tract earning historic designation in 2003. The houses all have detached garages in the back, and all have 10-foot setbacks with narrow parkways. Street parking, because of the narrowness of the road, is only on one side of the street. And as is always the case in historic districts, there are stern guidelines regarding monkeying around with anything visible from the street.

The interior of the home at 304 Eliot Lane feels a bit larger than its stats would indicate, although, face it, at 650 square feet you wouldn’t feel like you’re in a sprawling ranch-style home.

It has an open floor plan, with the well appointed kitchen flowing into the living room with a wall-to-wall, floor-to ceiling window that brings a strong sense of added dimension to the room, dragging outdoors into the house. 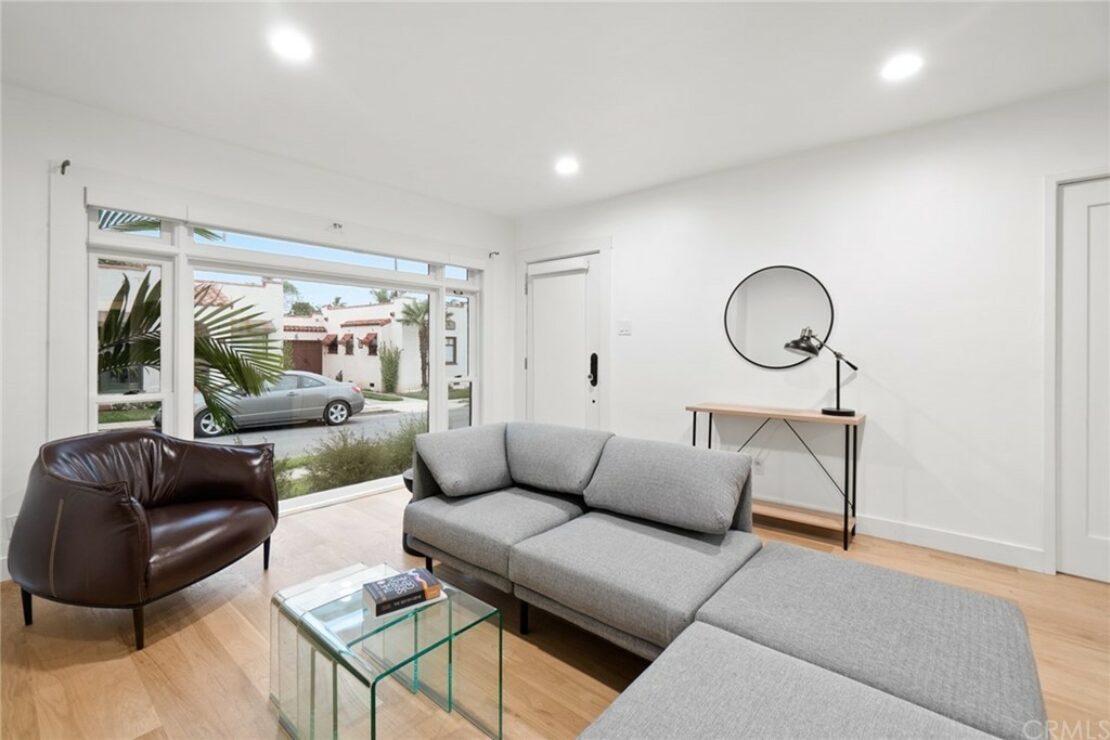 The living room with its oversized window. Listing photo.

Also adding to the sunny vibe is the fact that the whole interior is white, discounting the bathroom with one black wall and the shower/bath enclosure papered in a gray monochromatic soleil design.

Wrestling with the expansive living room window for the title of the home’s high point is its private backyard with a new fence and a grass yard dotted with square pavers leading to a cozy corner with a fire pit and a concrete planter/bench providing a perfect spot for a small get-together.

The home, listed by Realtor Tara Riggi of Think Boutiq Realty, is ideally located near Colorado Lagoon and a short stroll to cool Heights offerings like Ma N’ Pa Grocery as well as a manageable walk to Second Street.

Turning to the upscale Naples neighborhood, we have a few items of note: The large waterfront vacant lot on the  premier corner at the intersections of the Rivo Alto Canal, the Colonnade Canal and Naples Canal, and just steps from the Colonnade itself, has been yanked off the market after more than three years of languishing on the market with a steadfast $4 million price tag, according to Realtor Keith Muirhead. The lot, the sole remaining undeveloped waterfront parcel on the island, has its own boat dock that runs the entire 68 feet of the lot’s frontage.

The lot’s owner (as well as Muirhead) had more success with the house adjacent to the lot, at 220 Rivo Alto Canal, which sold for $3.9 million, off a $4.2 million list. 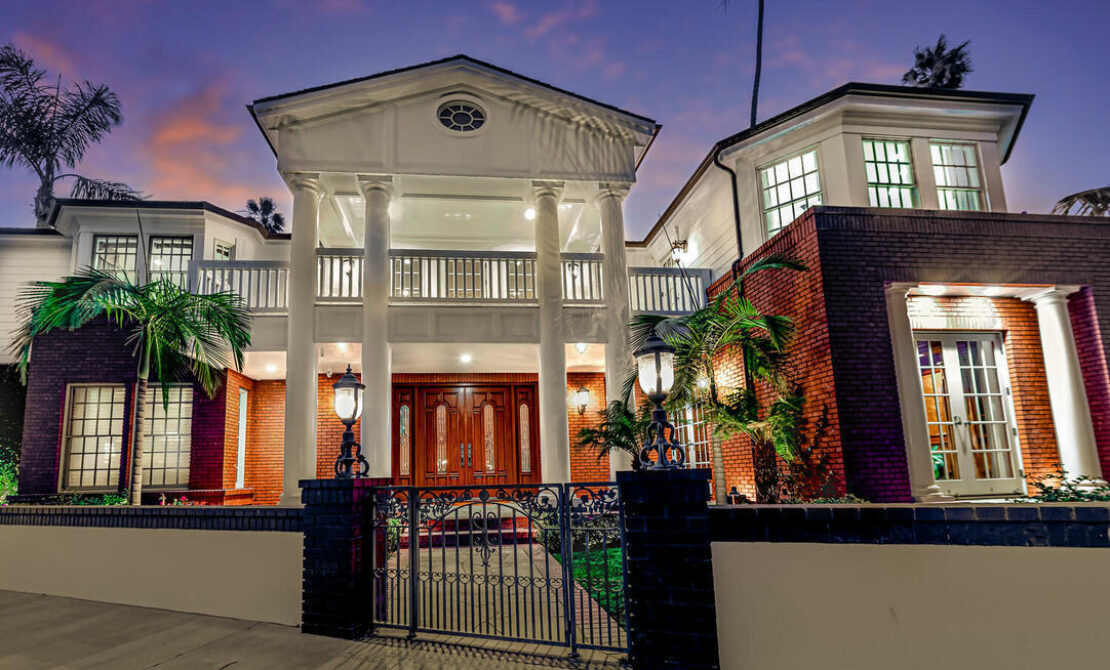 This home on Giralda Walk is getting more affordable. Buy it today for $6.895 million. Listing photo.

A bit farther inland, off the water at 93 Giralda Walk, a perhaps overly opulent mansion that hit the market running, with a listing of $8,995,500, is getting closer to what I can afford. After going on sale in March, the price was dropped on July 1 by a cool million bucks. Then, another half-million was knocked off on July 27. Now, it’s listed at $6,895,000. Come on! What will it take to get you into this house?