For the last 15 months, the city of Long Beach has been using an artificial intelligence software platform that analyzes residents’ social media use to help officials gauge public opinion on policies like mask mandates, the vaccine rollout and even the decision to shut down a local restaurant that flouted COVID-19 rules.

Although the data has been used to inform decision-makers on some of the most consequential topics locally, its use has flown mostly under the radar because city officials used emergency powers to procure the service—a move that bypassed any public decision by the City Council.

But now the City Council will vote on whether to use the software for another year. The contract with Israeli firm Zencity, which manufactures the software, is on tonight’s consent calendar, which contains routine items that typically pass without debate.

Zencity’s software looks at Facebook, Instagram and Twitter posts from a variety of public and private entities and organizations in Long Beach—such as elected officials, neighborhood groups and news organizations like Long Beach Post—then collects all public interactions, including comments and reactions, according to Maura Ventura, the city’s Business Operations Manager. It uses “machine learning” to assign interactions to a specific topic as well as pick out references to specific Long Beach locations or city services.

City officials then use this data—compiled into reports—to tailor their official communications and public approach. “For example, the city is using the tool to better understand the community’s level of vaccine hesitancy,” said Ventura.

The reports the software churns out are filled with lists, charts, graphs and even geo-located maps showing public opinion breakdowns by individual neighborhoods. They list “trending topics,” pull out “popular comments,” and allow city officials to track resident feedback on a whole host of issues and controversies in “real time,” according to Zencity.

In a testimonial posted on the Zencity website, Eriksen said Long Beach officials use the software at least three times a week. “Zencity has helped inform our work with mask mandates, reopening and business compliance, and our vaccine efforts,” Eriksen said.

One area the city used Zencity was in the controversy over the Bluff Heights eatery Restauration. Despite the city’s closure of dine-in service during the pandemic, Restauration owner Dana Tanner insisted on remaining open, incurring citations, fines and even criminal charges. Tanner closed Restauration last month but is still facing a host of misdemeanors, including accusations that she ran an illegal gas line to keep her restaurant open.

A “case study” on Long Beach’s use of the software platform posted on the Zencity website shows that city officials used the software to analyze more than 40,000 social media interactions and comments made during the Restauration controversy. According to Zencity, the software reported that people online were objecting to Tanner’s actions at a rate 3.5 times higher than those sharing their support. 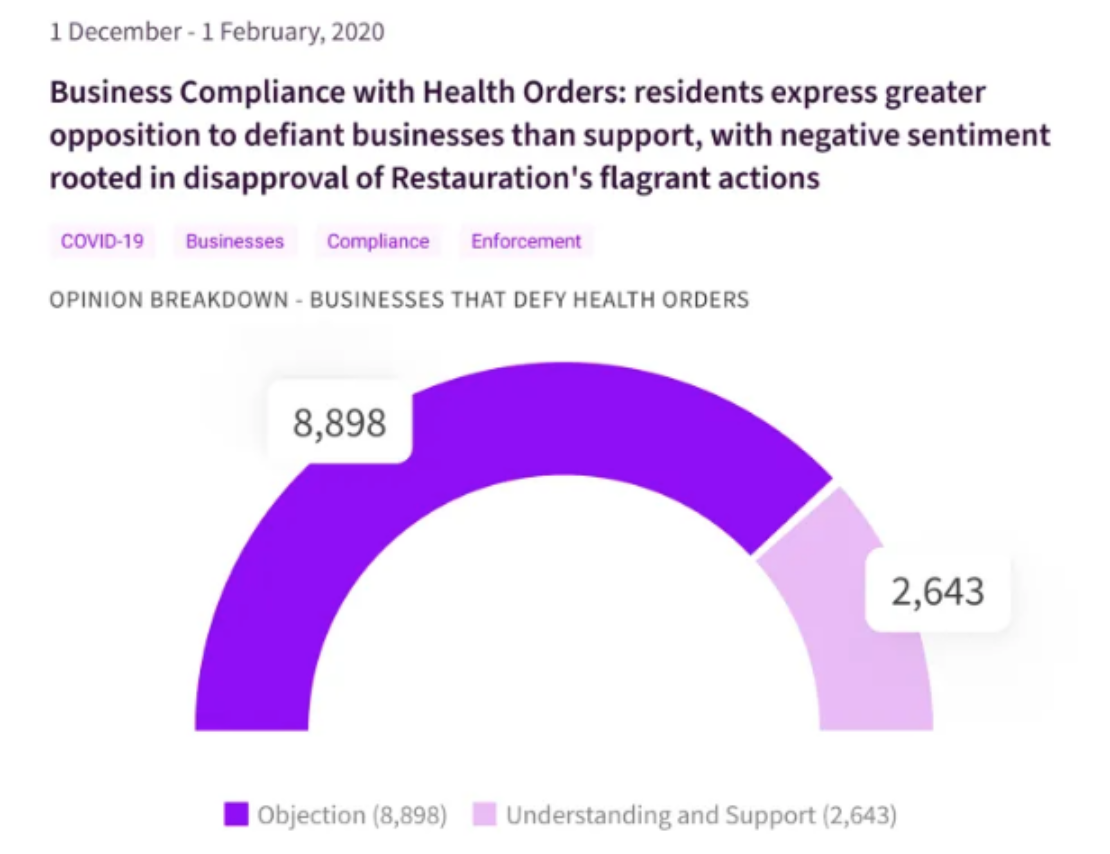 A screenshot from Zencity’s website showing its analysis of the online response to Restauration’s decision to stay open.

Using that data, city officials “pushed forward confidently and with the support of its community members, as it continues to navigate the pandemic and its reclosures and reopenings,” states the Zencity website.

“I think that’s super-messed up,” Tanner said after looking at the Zencity webpage about Long Beach. “The dynamic of what people do online is not real life. It’s crazy to me that that’s how the city could make a decision.”

City officials began using the software in February 2020, after seeing other California cities that were using it to “understand resident discourse in their jurisdictions,” said Ventura.

At the time, various cities and counties across the country were using the software to learn how their residents felt about the U.S. Census, according to Zencity’s website. But when the pandemic struck, officials everywhere began using it to study how residents were reacting to their respective COVID-19 responses.

Ventura said Long Beach started with a free three-month trial from the company. When that trial ended, the city used its “emergency purchasing powers” that were part of the declaration of a local health emergency on March 4, 2020, to buy the software package for a year.

Zencity is used by more than 200 cities and counties in the U.S., according to the company. Other U.S. customers listed on Zencity’s website include Los Angeles, Sacramento, San Jose, Austin, Colorado Springs and New Orleans, among others.

Though Long Beach officials stress that the Zencity software only looks at publicly available data, elected officials in cities like Pittsburgh and Geauga County, Ohio, have expressed concern about the platform’s reach. The Electronic Frontier Foundation, a nonprofit organization that focuses on digital privacy issues, also finds the software troubling.

“Government monitoring of people’s social media posts endangers the free speech and privacy rights of members of our communities,” said Karen Gullo, a spokeswoman for the Electronic Frontier Foundation.

For Mohamed Abdelhamid, assistant professor of information systems at Cal State Long Beach, Zencity’s software doesn’t seem to violate internet users’ privacy because the company only seems to concern itself with publicly available data. “The owners of the data are the people, and when you’re putting yourself out there, you have to be aware of what’s being done with your data,” he said.

But the software’s reliance on using social media interactions to gauge public opinion seemed very problematic to him. “On the Internet, only people with very negative or very positive positions mostly react,” he said, echoing Tanner’s concerns. “And negative comments disseminate more.”

Focusing on those interactions risks losing the larger picture, in which the majority of residents may not publicly express opinions at all on a given topic, Abdelhamid said.

The contract up for vote tonight is for $128,340 for a year, with a 30% contingency of $38,502. There’s also the option for city officials to renew the contract for two additional one-year periods.

The Zencity contract is also sole-source, meaning it did not go out to public bid. According to Eriksen, Zencity is the only provider of an AI platform that gives representative feedback, compiles summations of online public opinion and delivers a “customized analysis of resident sentiment.”

Editor’s note: This story has been updated to clarify how it used Zencity in the controversy over Restauration.