A $1.495 million two-story home in the Ranchos is an eye-catching rarity • Long Beach Post News
- ADVERTISEMENT -

Two-story Cliff May-designed homes are like unicorns, and usually not in the good way. They’re rare enough; Cliff May expert, resident and Realtor Doug Kramer estimates there are about a dozen scattered around the 700-home Cliff May Ranchos neighborhood in East Long Beach in a tract east of Studebaker Road and north of Spring Street. But as a rule, they’re fairly unappealing, bordering a time on being an eyesore.

The problem with adding a second story to May’s original sleek and invariably one-story designs is they’ve usually been done on the cheap and quick, with a contractor working without an architect and just slapping a generic rectangular top to the home, which, while, yes, it provides additional space to the original, it generally results in a dog’s breakfast in terms of appearance.

So botched were most add-ons that the neighborhood succeeded in banning second-story additions in about 2008, according to Kramer. And with the Cliff May mania continuing to drive up prices and with owners anxious to improve their Mid-Century Modern homes, it’s unlikely that anyone will monkey around with any sort of additions that will detract from the ideal floor plan.

But there is at least one exception to a two-story Cliff May that was done beautifully with no aesthetic mortal sins. It is the one at 3110 Pattiz Avenue in the southeastern corner of the estates. 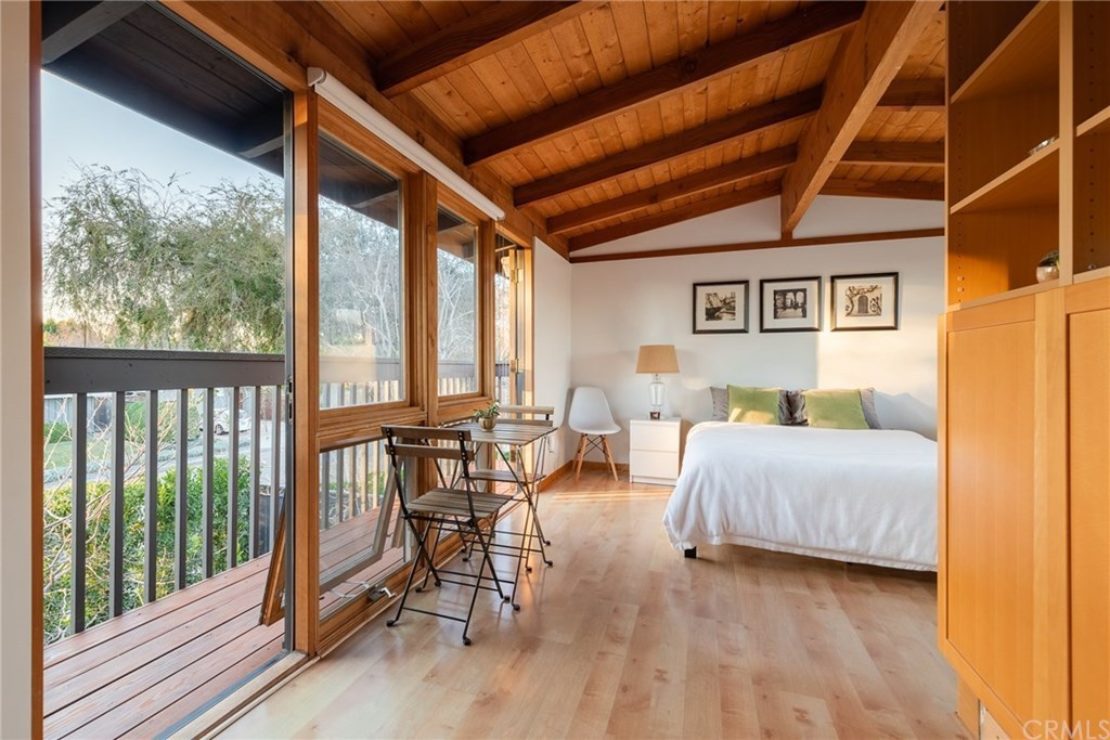 The house is listed by Nate Cole of Unique California Properties for $1.495 million. And, while purists might bristle at a two-story Cliff May as a contradiction in architectural terms, the home nevertheless takes the style literally and figuratively to a whole new level.

May’s ranchos are typically built low, with the homes’ floors level with the outside ground. Interiors are marked by post-and-beam construction and a liberal use of floor-to-ceiling glass that makes you wonder if he had stock in Windex.

The floor plans are wide open and most bedroom windows have expansive views of the yards that surround the homes. What we think of as a backyard is the front yard of the homes, with privacy offered by fences blocking off view from the street, making the main yard its own private courtyard and, especially in the Southern California climate, it serves as perfectly acceptable additional living space and can easily handle a few dozen people for an outdoor party or barbecue.

The homes in Rancho Estates sprung up like futuristic mushrooms in the post-war era, with the houses all built between 1952 and 1954. The tract was originally called Lakewood Rancho Estates, until the area was annexed by Long Beach in the summer of 1954.

The homes were initially inexpensive, selling for about $12,000, and easy to build, yet definitely unique enough to attract a certain buyer hankering for a real California vibe, though some detractors are put off by the lack of a raised foundation and near-complete lack of insulation. Their indoor-outdoor feel can make for chilly winters and scorching summers, though many homeowners have added interior insulation, as much to baffle the sound between rooms as for climate comfort, and most have installed air-conditioning with the decrease of that cost since the 1950s.

The Mid-Century mania has driven prices up in the estates in recent years, with people buying the homes as much for art as an abode. In the 1990s, when standard tract homes on the west side of Studebaker were selling for around $250,000, the Cliff Mays were fetching a similar price. But in just a few short recent years the homes in the Ranchos have been regularly commanding prices, starting in 2018, of over a million dollars, $200,000 or more than their neighbors across Studebaker.

The Pattiz Avenue home looks exactly like you might imagine a two-story Cliff May would look with careful attention to Mid-Modern detail. It has maintained the sleek, horizontal lines and capacious overhangs, and it’s easy to imagine even Cliff May giving it a begrudging approval.

Rancho specialist Kramer gives it a qualified OK. “I think as far as second-story additions, it’s as good at keeping with the style you can get, and the owners did a fabulous job with the interior.”

“It’s one of the few two-story ranchos that’s done really well,” he said. “The top floor matches the post-and-beam architecture. It looks beautiful, with redwood-stained exterior and dark-brown finish.”

The three-bedroom, three-and-a half-bath home has been thoroughly upgraded by the current owners, with an all-new kitchen and appliances as well as renovated bathrooms. The main floor has three bathrooms and two main bedrooms at opposite ends of the house. The two-story entry foyer and family room leads to the upper level, with its own lofted living/sleeping area, a kitchenette, a sunny bedroom, full bath, and a view balcony. Behind the house is a solar-heated lap pool. 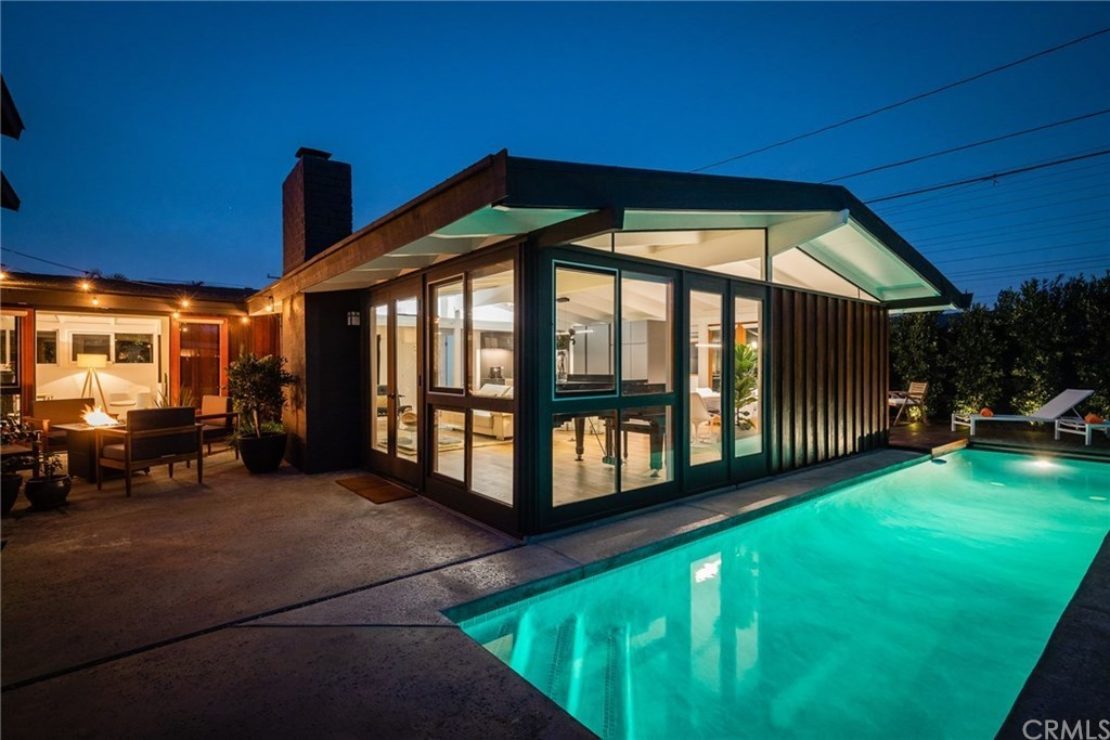 A solar-heated lap pool adds beauty and a workout area behind the house. Photo by Sterling Reed.

“People in the neighborhood really get attached to these houses,” said Cole. “They move in because they like the house, first, and then their kids like their school and make friends in the neighborhood and eventually the owners become hesitant to leave.”

But because the potential inventory of 700 is so big, and perhaps because some of the older residents are suddenly finding themselves perched on a million-dollar nest egg, there are usually a couple of Cliff May models for sale at any one time.