Expansive estate on 3 lots in Los Cerritos on the market at $3.5 million • Long Beach Post News
- ADVERTISEMENT -
Help us light up the city; Add your home to the 2022 Holiday Lights map. CLICK HERE

In my hazy, long-ago youth, living frequently with my grandparents on the 3900 block of Cedar Avenue in Los Cerritos, I would often walk past this huge walled-in property at the corner of Pacific and San Antonio Drive and wonder just exactly what those walls were preventing me from seeing. From outside it looked like a hacienda, which would be fitting in light of its proximity to Rancho Los Cerritos. You could make out a bit of the main house and its tiled roof along with the giant pines and palms that towered above it all, but I never got a proper look at the place until last week, when Realtor Kristi Faber Vento, who is listing the property with her mother Carolyn Faber, showed photographer Thomas Cordova and me around the place.

It was no less amazing than I’d imagined as a youngster.

We entered the estate through a gate on the San Antonio side which led us immediately into a perfectly manicured English garden with boxwood shrubs forming mazes around rose bushes. It was in the main backyard, one of three outdoor spots on the property and by far the largest. It is shaded by some ancient pines that have likely been on the property at least as long as the house, which was built in 1920 for oilman and developer E. Decatur Mitchell, his wife Bettye and their family. 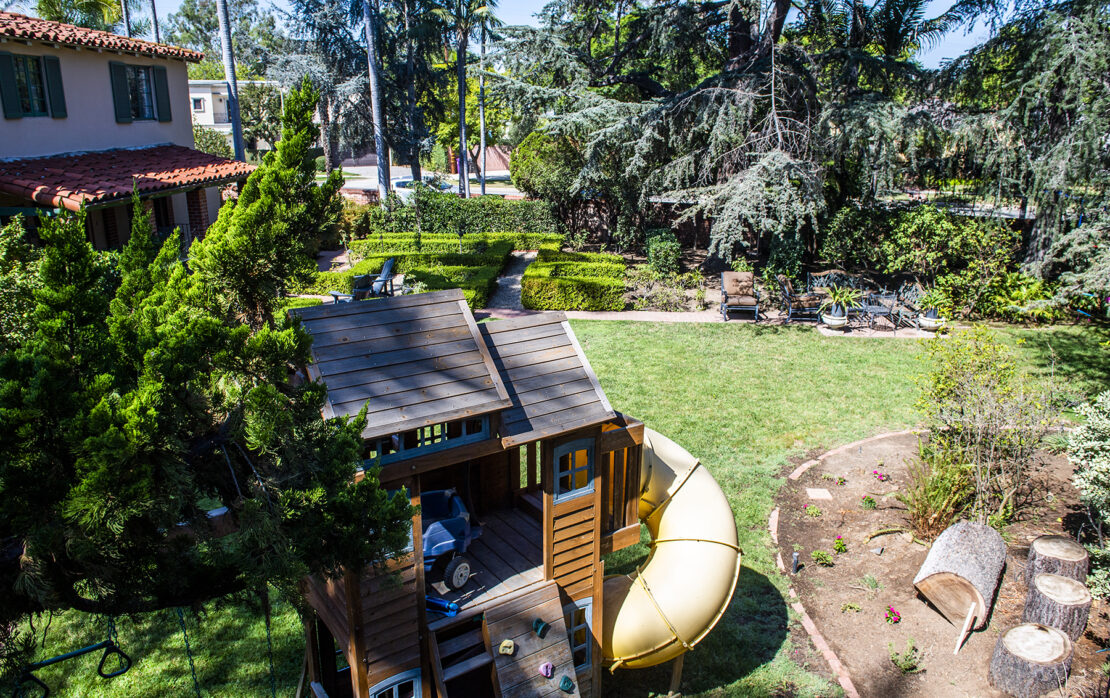 A huge yard, one of three at a home for sale on Pacific Avenue at San Antonio Drive in Los Cerritos. Tuesday, September 27, 2022. Photo by Thomas R. Cordova.

The home, which is massive by Southern California standards at 4,829 square feet, is less imposing than it might otherwise seem because it sits on a triple lot of nearly a half acre, which makes for a huge main backyard that features, in addition to the rose garden, a deep grotto with a play area for the two children of the current owners, complete with a large and sturdy treehouse and a statue and fountain fairly buried among foliage.

The property has been owned by a string of Mitchell’s relatives for nearly a century until Decatur’s daughter sold it in 2016.

The current owners have done some upgrading in the kitchen and bathrooms but much of the home is fairly original, including the ultra-generous use of wood, such as the gently sloped staircase which is easy for an elderly climber (it’s been proven) and is surrounded by solid mahogany panels—which are featured in other parts of the house as well, most notably in the rich, large and almost overly formal brick and mahogany dining room. 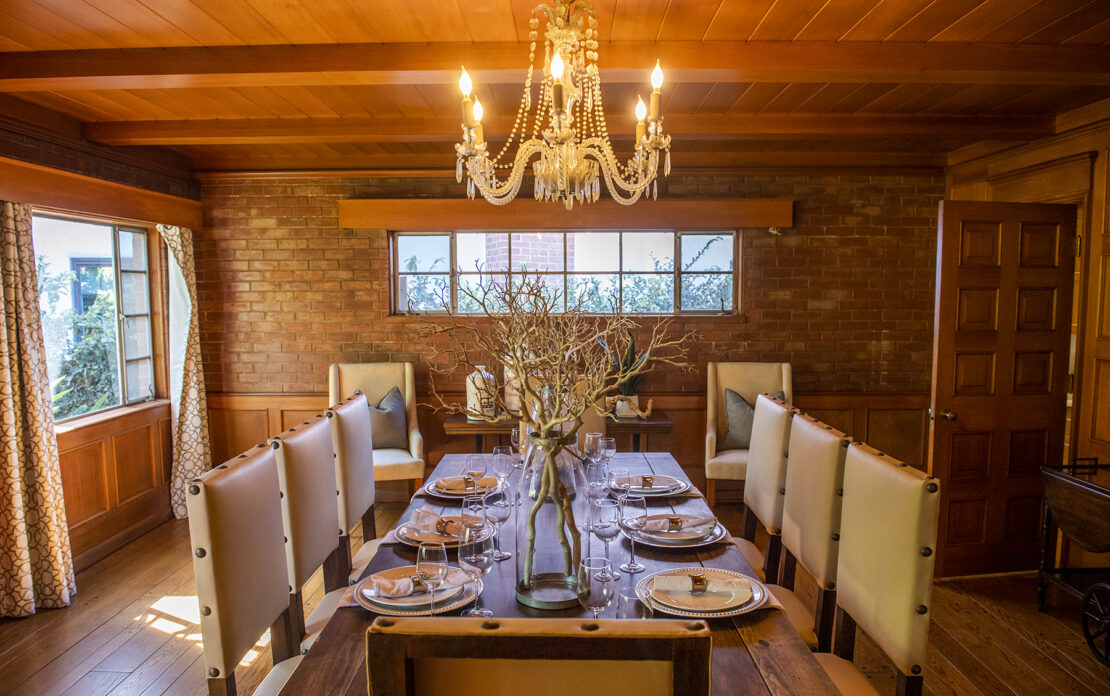 Each room seems to be better or more inviting than the last as you walk through the main house. The living room with pegged oak flooring and an oversize marble-trimmed fireplace is the first focal point, then there’s the bright breakfast room with a table surrounded by windows. The formal dining room has pocket doors that open to the butler’s pantry and the kitchen with its La Cornue range that costs more than homes in the 1970s and its custom-made La Cornue hood which alone cost more than $6,000.

The boss of the house gets to pick the primary bedroom. There’s one on the ground floor that’s ensuite with an upgraded bathroom; the one on the second floor has no attached bath, but instead has a separate sitting room with access to the property’s sole balcony.

The selling point for me is the home’s fireside room, a rustic, log-and-knotty-pine room with a stone fireplace, bookcases and built-in cabinetry, and it opens to a fantastic polished koa wood bar. 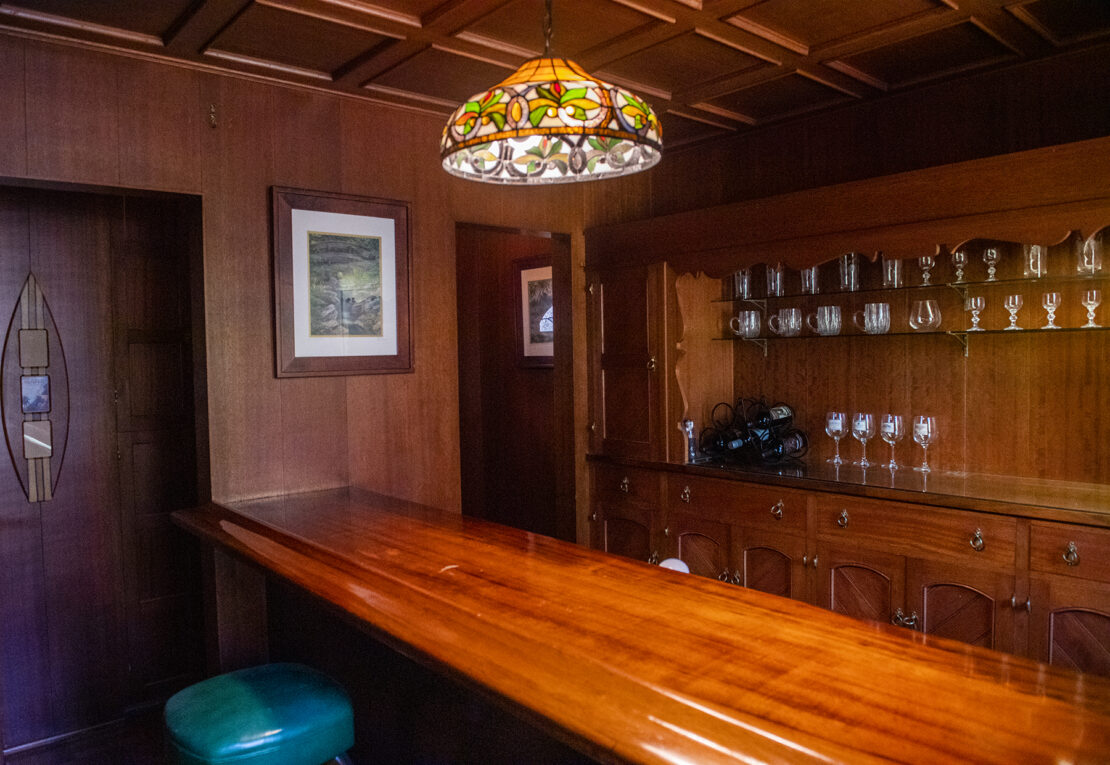 One of the outdoor areas is perfect for entertaining, with room for three or four tables and decorated with a koi pond and fountain. A back patio and courtyard, off of the fireside room is paved with Saltillo tile and is yet another entertainment spot with access to the kitchen and the bar as well as to what’s described as a secret underground wine cellar dating back to Prohibition. The wrought iron gate that opens for parking has a little history of its own, being built from the material scrapped from Long Beach City College after it was destroyed in the 1933 earthquake—at that time, the college, called Long Beach Junior College, was located on the Wilson High School campus. 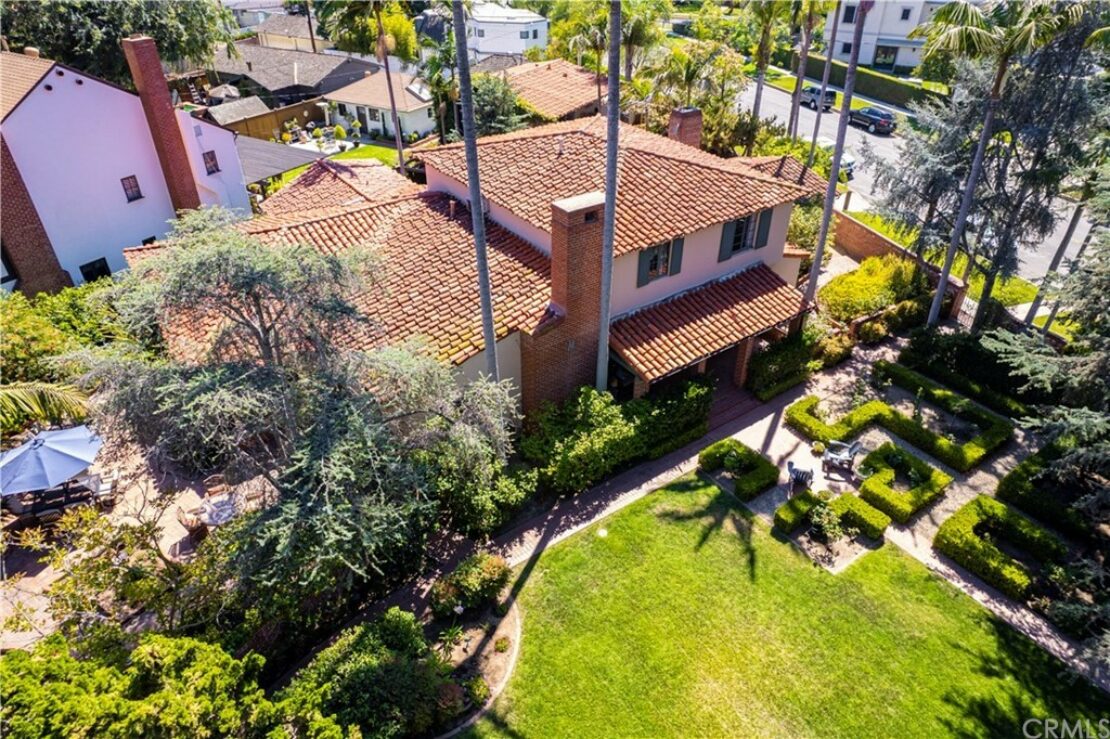 A drone photo of part of the property. Photo courtesy of Carolyn and Kristi Faber.

Finally, the property includes a one-bedroom, one-bath guest house built above the garage.

In all, it’s a wonderful and expansive property, the nicest we’ve seen in a neighborhood that’s full of beautiful houses and yet still remains a fairly secretive area in a city that tends to give more value, deservedly if that’s your lifestyle, to homes along the water, but Los Cerritos remains a bit underappreciated. At $3.5 million, it definitely holds its own against similarly priced mansions in the city’s seaside communities.

A beautiful reimagining and rescuing of a historic Los Cerritos home