The area just north of Signal Hill was once grazing land for Jotham Bixby’s livestock on his family’s Bixby Ranch, later named Rancho Los Cerritos. When oil was discovered on Signal Hill in 1921, Jotham Bixby’s Land Company subdivided the tract and offered individual sites for sale, strongly suggesting that you’d become a wealthy landowner once oil was struck in the lowlands, mere blocks away from the oil-rich hill. The lots, priced from $600 to $800, included oil rights, and a series of full-page ads placed by the Jotham Bixby Land Co., in the local papers touted the riches sure to come the buyer’s way: “If you want to be able to saturate your language with oil—if you want the thrill of finding ten-dollar bills in your pocket where only ones used to grow…” then you are advised to pick up a lot in the California Heights tract.

For a while, the land teetered between becoming an oil field or a residential neighborhood and when the oil didn’t pan out, homes began to spring up rather rapidly.

Some of the earlier structures, mostly Craftsman bungalows, were moved down off Signal Hill to make room for derricks, and from an increasingly retail-centered Downtown, while later houses were built, largely in the Spanish Colonial Revival style as the neighborhood’s construction moved east from Lime Avenue to, eventually, Gardenia Avenue, between Bixby and Wardlow roads.

Today, California Heights is quickly becoming one of the hottest neighborhoods in the city for home sales, thanks in a large part to its location close to high-paying jobs at the booming space technology industries near Long Beach Airport on land that decades ago brought solid salaries to households in Lakewood Village and East Long Beach, bringing a population explosion to those areas in the 1950s and 1960s.

Its location is a perfect draw for people working in the space industry, with companies like Relativity, Virgin Orbit, Rocket Lab, SpinLaunch and Space X rapidly increasing their workforces nearby, along with many attractive amenities in the area including LBX, SteelCraft and the Bixby Knolls shops and restaurants. Add to that the cachet of living in a historic district with attractive homes nestled along streets lined with century-old trees, nice parks and good schools and it should be no surprise that even small homes in Cal Heights are hitting the million-dollar mark. 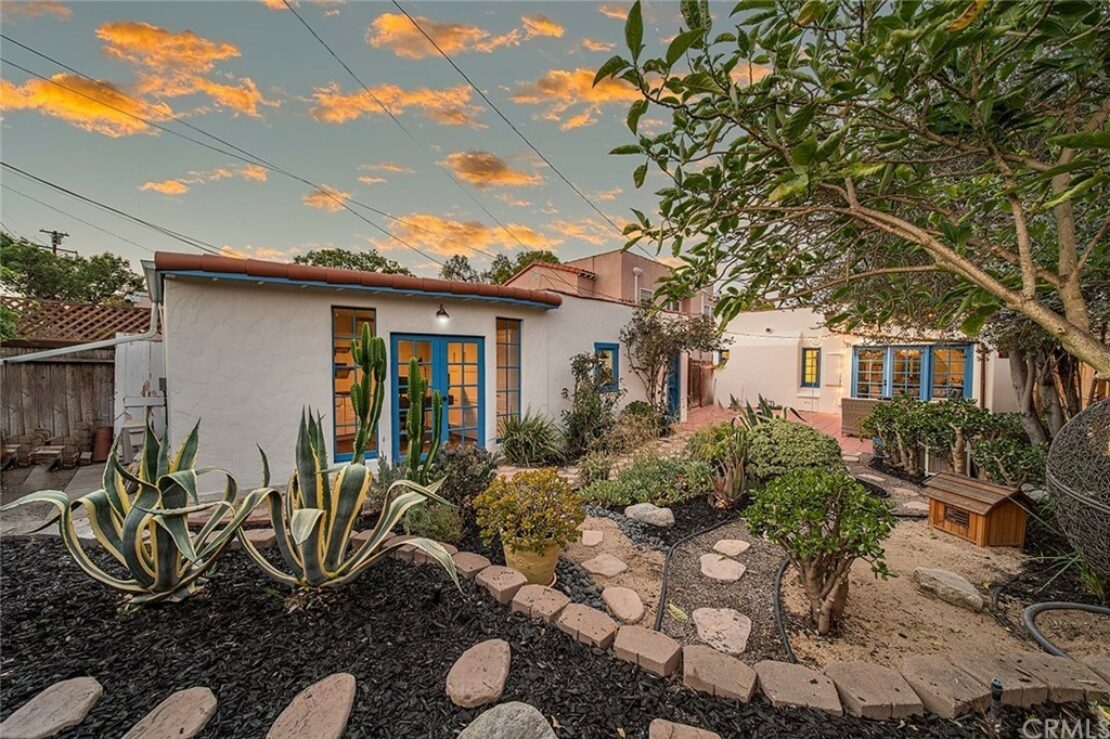 The artful landscaping adds to the beauty of the backyard of the Cal Heights home at 3721 Lemon Ave. Listing photo.

One example is a two-bedroom, two-bath home at 3721 Lemon Ave., which was listed by Realtor Ben Fisher at $950,000 and is now in escrow after an offer in the million-dollar neighborhood was accepted.

He noted that another house in the neighborhood, three blocks to the south, a five-bed, three-bath home on Myrtle Avenue, also listed by Fisher, is also in escrow at a price “significantly more” than the $1.175 million asking price.

Another home on Myrtle hit the market late last week, listed by Realtor Debra Greco. The beautiful three-bedroom, two bathroom, 1,583-square foot Craftsman at 3754 Myrtle Ave. The 1914 home was moved to Cal Heights from Signal Hill in 1920, said Greco who expects multiple offers on the place by today. The asking price is $1.049 million. 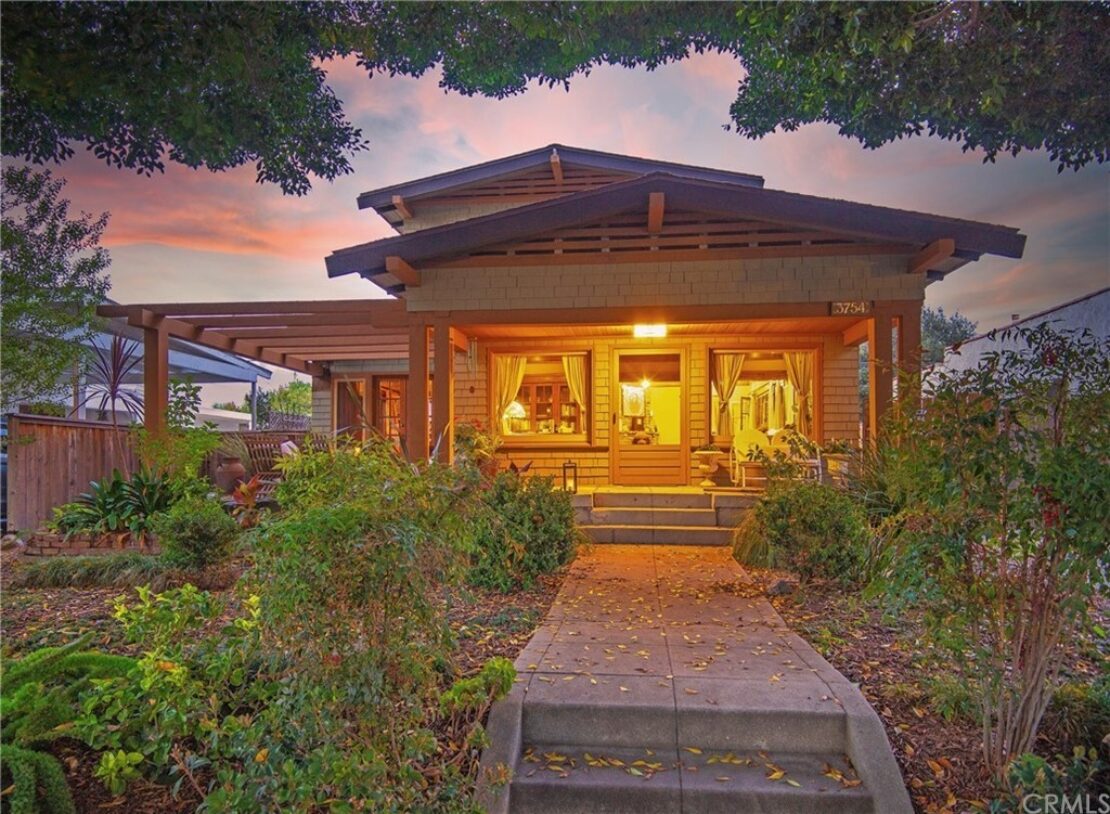 Inventory is low now in the district of nearly 1,500 homes, with only fewer than a half-dozen  currently on the market, all listed at close to or over $1 million.

“It’s wild,” said Fisher. “The home on Lemon, selling for $1,000 per square foot, might be a record in Cal Heights. That’s Naples numbers.”

Fisher puts the rapid rise to a number of factors, not least is the proximity to the space technology facilities and the number of good- to high-paying jobs. Relativity, for instance, has hired about 600 employees, with that number set to increase to nearly 1,100 by 2026 along with a projected investment of almost $320 million over the same period. Local economists estimate  that the combined space-related businesses in Long Beach account for more than 6,500 jobs.

“I’m always hearing from people about how cool it is that they can ride their bikes to work,” said Fisher. “And they love places like SteelCraft and LBX,” and, says Fisher, a big draw is how nice a house they can get in a good neighborhood for their money as opposed to Los Angeles, where many Long Beach homebuyers are coming. Despite the fact that a million dollars is undeniably a lot of money, what that amount can buy in Long Beach is much greater than what it can buy in LA, where the median prices in good (not great, but good) neighborhoods are invariably over $1 million.

(Former LA residents also make up a fair amount of those who have moved into the Cliff May Ranchos in East Long Beach, causing homes to sell at over a million dollars, though the area seems to have peaked at about $1.3 million a copy lately.)

The home on Lemon Avenue that’s now in escrow, having been appraised at $1 million, is a cozy little Spanish Colonial Revival, as is typical of much of the neighborhood.

The recently restored floors, doors and trim are original hardwood and the kitchen has plenty of storage, upgraded appliances and recycled glass countertops. It’s a breezy room, with French doors opening to the backyard patio that’s surrounded by exquisite landscaping.

The home, as is the case with the historic district as a whole, has been carefully maintained and restored, just another of California Heights’ selling points.

“Everyone who is coming here is excited about living in a historic district,” said Fisher. “It’s not like Naples, where people come in, scrape the little house and put up a monster. It’s more about preservation and restoration. Everyone is excited to do that.”