Long Beach’s Park Estates is a somewhat hidden neighborhood despite having entrances off busy Pacific Coast Highway and Bellflower Boulevard. It’s one of the most desirable neighborhoods in the city. Though it lacks the treasured waterfront vistas of Naples and the Peninsula, and the old-money elegance of Los Cerritos’ Virginia Country Club, it is a remarkably quiet and stately area dotted with some of the city’s most pricey estates.

The 671-home tract is also a museum-like collection of mid-century modern architecture with homes several levels above the now-$1-million Cliff May homes east of Studebaker in the Ranchos neighborhood. Anyone with an appreciation of the architecture of the 1950s and 1960s could easily spend hours driving along the tract’s winding streets admiring the works of the greatest mid-mod designers—Paul Tay, Richard Neutra, Edward Killingsworth, Dick Poper, William Lockett and Kenneth Wing. 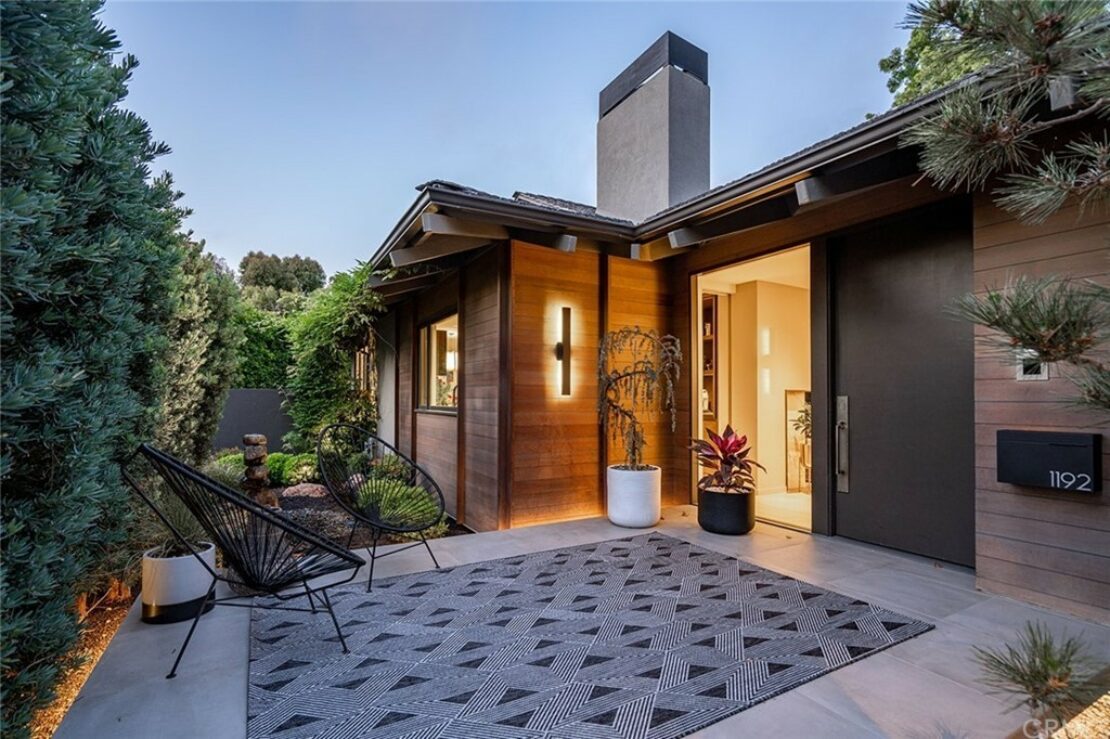 The front patio and entry to the Kenneth Wing-designed home on Bryant Road in Park Estates. Listing photo.

A Kenneth Wing-designed home at 1192 Bryant Road owned by restaurateur Carl Dene and his wife, Realtor Heather Dene, who was the listing agent for the property, was on the market for five days before an offer was accepted last week. The couple is still accepting backup offers before escrow closes on June 16. The property was listed at $2.65 million.

The couple owned a classic Paul Tay-designed home on Anaheim Road prior to purchasing the Wing house in 2016. Dene said his offer for the home was $50,000 below the highest bidder, but that bidder had plans to demolish the house, so the owners sold to the Denes, who wanted to preserve it. 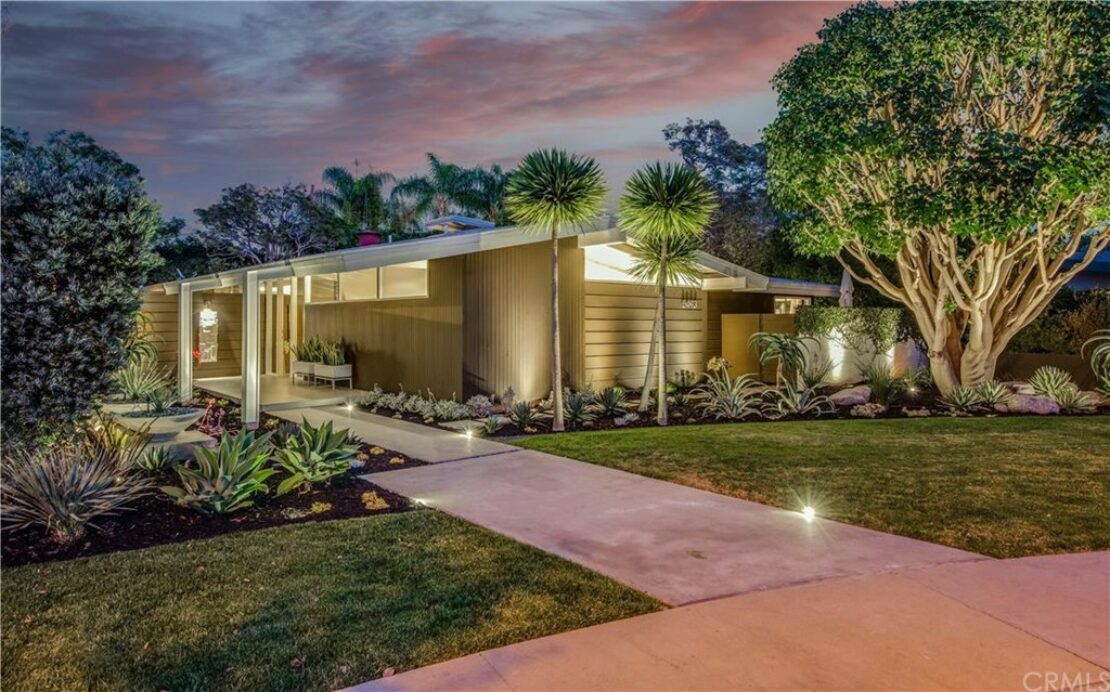 “Architecture is really important to me,” said Carl. “I got my degree in graphic arts, so good design is very meaningful to me.”

Dene said that he and his wife and their two boys, now ages 11 and 12, used to walk past the Wing house while trick-or-treating. “I always loved it,” said Dene. “The roofline, the way it sat on the street, the way its cantilevered foundation, that was part of Wing’s design, gives the appearance of the house floating above the ground.”

When it became available, the Denes toured it with architect Jon Glasgow, founder of the Long Beach firm Interstices. “We looked into the home’s history, with help from Jon as well as  Maureen Neeley, of HouStories, who researches the history of homes and other buildings.”

The team found that previous owners had made some changes that took away some of Wing’s traditional touches.

After purchasing the home, said Dene, “we tore it down to the studs and started building the whole house all over again,” armed with Wing’s original blueprints and Glasgow’s expertise.

Now, says Dene, the home looks like what Wing designed, save for an addition of two bedrooms over the garage, which Glasgow had to alter a bit. “One of the previous owners built the second floor bedrooms, but didn’t add a bathroom, so if you were upstairs, you had to do a bit of walking to get to one,” said Glasgow. “So we put in a bathroom, but that’s about the only part of the house that we strayed from Wing’s design.”

Wing is certainly one of the city’s most significant architects, though some of his works have been disappearing of late, such as the old court building on Ocean Boulevard, the First Methodist Church building at 507 Pacific Ave., and the soon-to-be-demolished Civic Center and City Hall, which was designed by a consortium of architects that included Wing and Killingsworth and others. 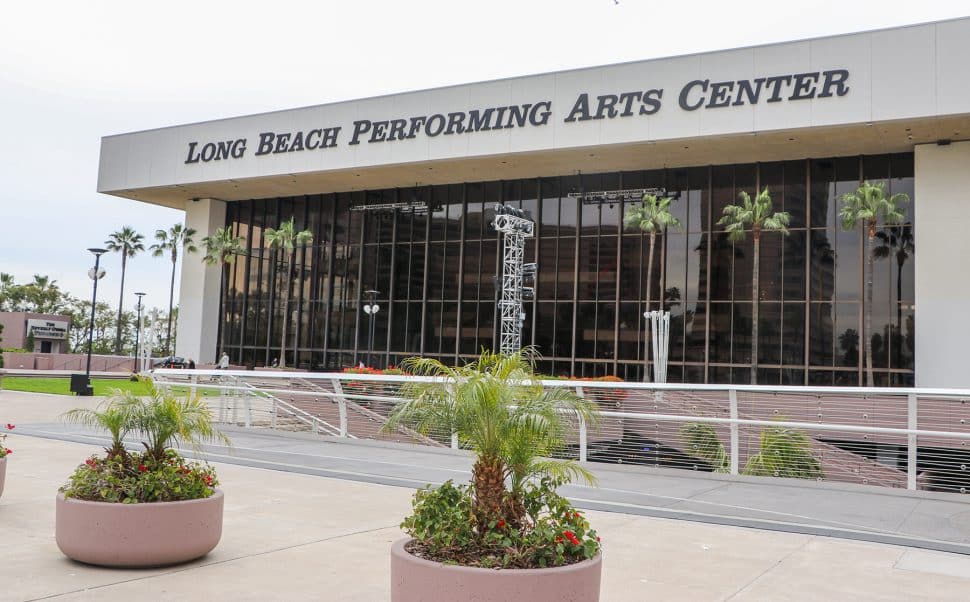 Among the buildings still standing are several homes in the Bixby and Los Cerritos neighborhoods, the Long Beach Arena, the Terrace Theater, the Harriman Jones Clinic—now a Rite Aid, at 211 Cherry Ave., by Bixby Park and the main terminal at Long Beach Airport.

His finest touch on the Denes’ house is a mid-modern signature that Wing used to the maximum: a 19-foot-long floor-to-ceiling wall of glass in the living room, with sliding doors that open fully to a covered patio in the backyard, doubling the living area as well as fully integrating it into the lush and shady professionally landscaped backyard. With mid-modern at its best, you’re never really positive if you’re inside or out. This design perfectly adds to that, and it’s a truly welcoming feature of the four-bedroom, four-bath house. 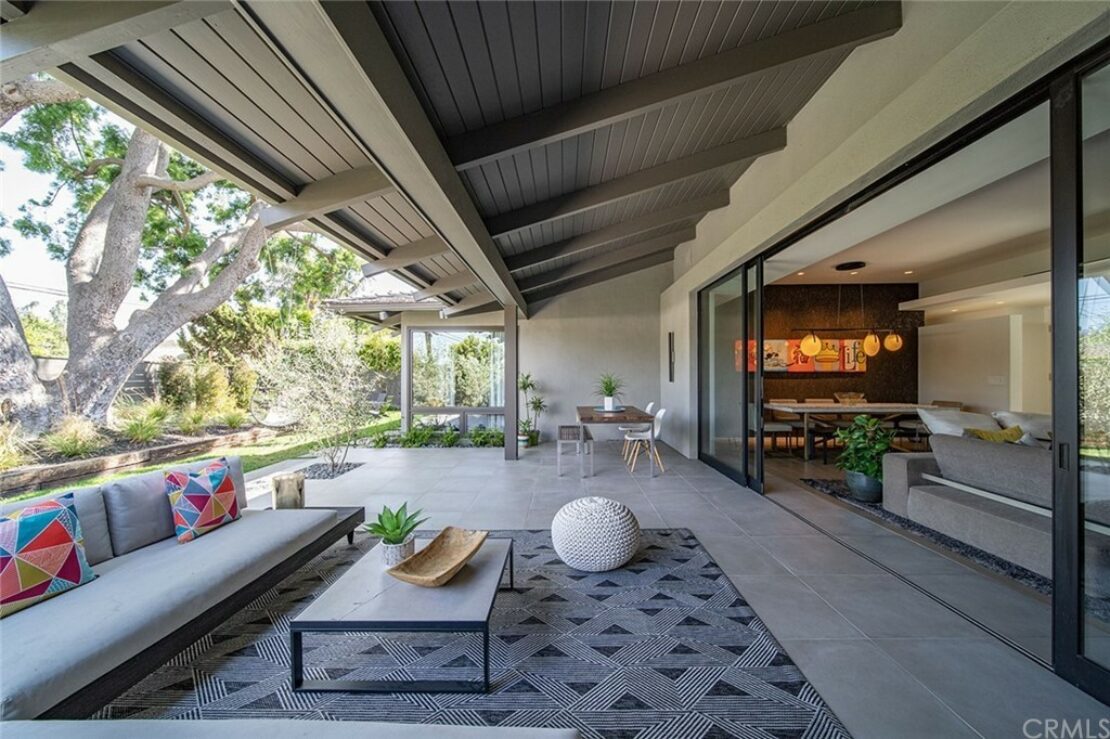 A 19-foot wall of glass fully opens up to the backyard patio in this mid modern masterpiece. Listing photo.

Dene, with his father Michael Dene, established four Long Beach restaurants that have won several awards among them: Michael’s on Naples, Michael’s Downtown, Michael’s Pizzeria and the top-dollar Chianina Steakhouse, the only one of the four to fall permanently to COVID-19.

Carl will still be involved with the Downtown restaurant, which he owns with developer Martin Howard, while Michael Dene and sommelier Massimo Aronne will run the other two restaurants.

But he and his family are moving up to the Napa Valley, where Dene and his wife are already at work snapping up properties including such locally beloved venues the Brannan Cottage Inn and Hotel D’Amici. And he’s also building a house, with Glasgow, for his family in St. Helena.

He said this time around he’s looking to build a modern farmhouse, incorporating some gray cedar wood from some old barns, along with Glasgow’s more modern touches.

“I’ll still come to Long Beach, but not as often,” Dene said. “Most of my experiences in Long Beach have been really, really good, but looking at my boys, I just want to slow things down for all of us.”