The Long Beach Planning Commission gave preliminary approval to a plan to construct two eight-story residential buildings geared toward teachers on the site of the former City Hall in Downtown.

The redesigned Lincoln Park and the mid-block project—originally envisioned to be a 432-foot mixed use tower that was projected to include a boutique hotel and housing—have both been pushed past their original November 2020 occupancy dates.

The mid-block development approved by the commission includes two housing towers developed by JPI Development, a firm based out of Irving, Texas. The two buildings would include 580 residential units and retail developments including a 100-unit teacher’s village where teachers in the city could access about 50 affordable units.

On Tuesday, the City Council voted to approve amendments that will push the expected completion dates for the park and the mid-block site would not be expected to be completed until the Fall of 2021. The entire project’s completion date was also pushed back a year to September 2022.

Jennifer Carey, a spokesperson for the city’s public works department, said that based on what the city’s understanding of the deal was, all of the deadlines are being met by Plenary Properties Long Beach LLC, the group carrying out the project development. However, documents approved in December 2015 when the deal was voted on by the City Council show a different timeline.

Long Beach officials approved the contract with Plenary-Edgemoor Community Partners in 2015 for a 40-year public-private partnership in which Plenary, now Plenary Properties, would build and maintain a new City Hall, library, park and new private mid-block site that currently is home to the old City Hall.

In return, the city agreed to pay Plenary $14.7 million annually over the course of 40 years, at the end of which ownership of the center would be transferred back to the city.

While the updated Lincoln Park plans approved by the council Tuesday will help connect it to the Metro Line on Pacific Avenue as well as a larger dog park, lighting enhancements, an outdoor reading room and a future concession stand, it has yet to break ground.

The sale of the mid-block site will eventually play a financial role in building the park as Plenary is obligated to use nearly $14 million from the proceeds of the sale to construct the park. Carey said that Thursday’s planning commission meeting could serve as the last step before the property is transferred over to Plenary.

The two residential towers would add much needed housing to the Downtown area, with each of the structures proposed to be about 115-feet tall. They’re much smaller than the grander tower that was originally envisioned, but that tower was only projected to have about 60 percent of the housing units as the plan currently under consideration.

“That was about four years ago and market conditions have changed,” Acting City Manager Tom Modica said Tuesday night, pointing out that since then about 1,200 new hotel rooms have either been built or are in the approval stage. 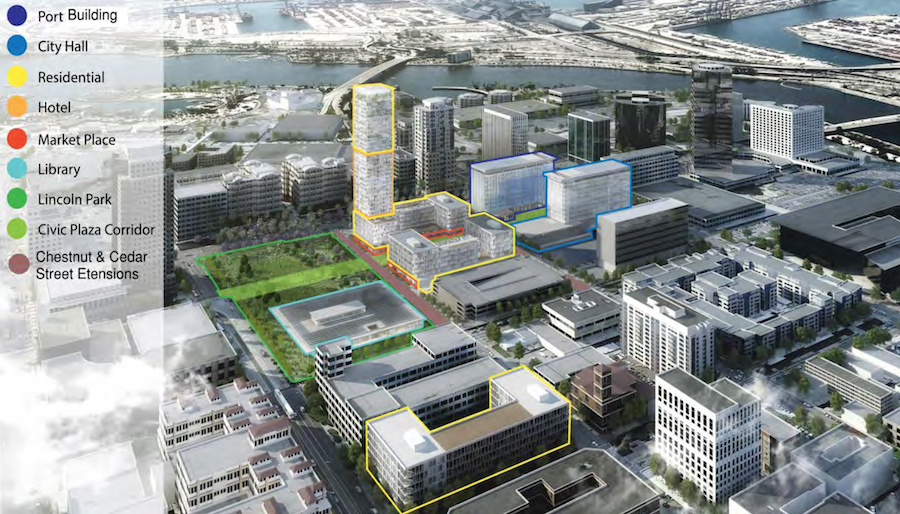 A rendering of the original proposal voted on by the City Council in December 2015.

With Planning Commission approval Thursday, the property could be transferred as soon as the beginning of April. At that point JPI would have four months to pull demolition documents for the old City Hall and 12 months to complete it. It’s expected that JPI won’t use the entire 16-month window.

“They’d like to start within the next few months,” Carey said.

Carey said that despite the economic uncertainty there has been nothing communicated to the city that the proposed development wouldn’t move forward as planned.

The series of votes which sets in motion the potential completion of the overhaul of the civic center, a deal that was sought since 2013, was cheered by city officials, as the city continues to grapple with the economic toll of the coronavirus pandemic.

“In light of how difficult the past few weeks have been this is one significant and positive development that has happened in the course of the last week or two,” Mayor Robert Garcia said.

Editor’s note: This story has been updated to reflect that the city agreed to pay Plenary $14.7 million annually over the course of 40 years, not monthly.