Local officials announced a new program Tuesday that would bring COVID-19 testing teams to undocumented and immigrant communities in West, Central and North Long Beach that have been identified as coronavirus hotspots.

But the newly developed outreach program comes six months after the city first identified how the novel virus disproportionately impacts Latino and Black communities, and at a time when cases of coronavirus in the city and across the state are waning.

Gaby Hernandez, the newly appointed executive director of the Long Beach Immigrant Rights Coalition, said the new program is much needed for the undocumented and Latino communities, however she said the program was implemented too late.

Hernandez, and the immigrant advocacy group she leads, has developed programs throughout the pandemic to aid undocumented communities, such as rent-assistance payments through its “Undocu-fund” program, which donated about $200,000 to families.

“The city now wants to do it six months in,” Hernandez said. “We’ve been doing this since March.” 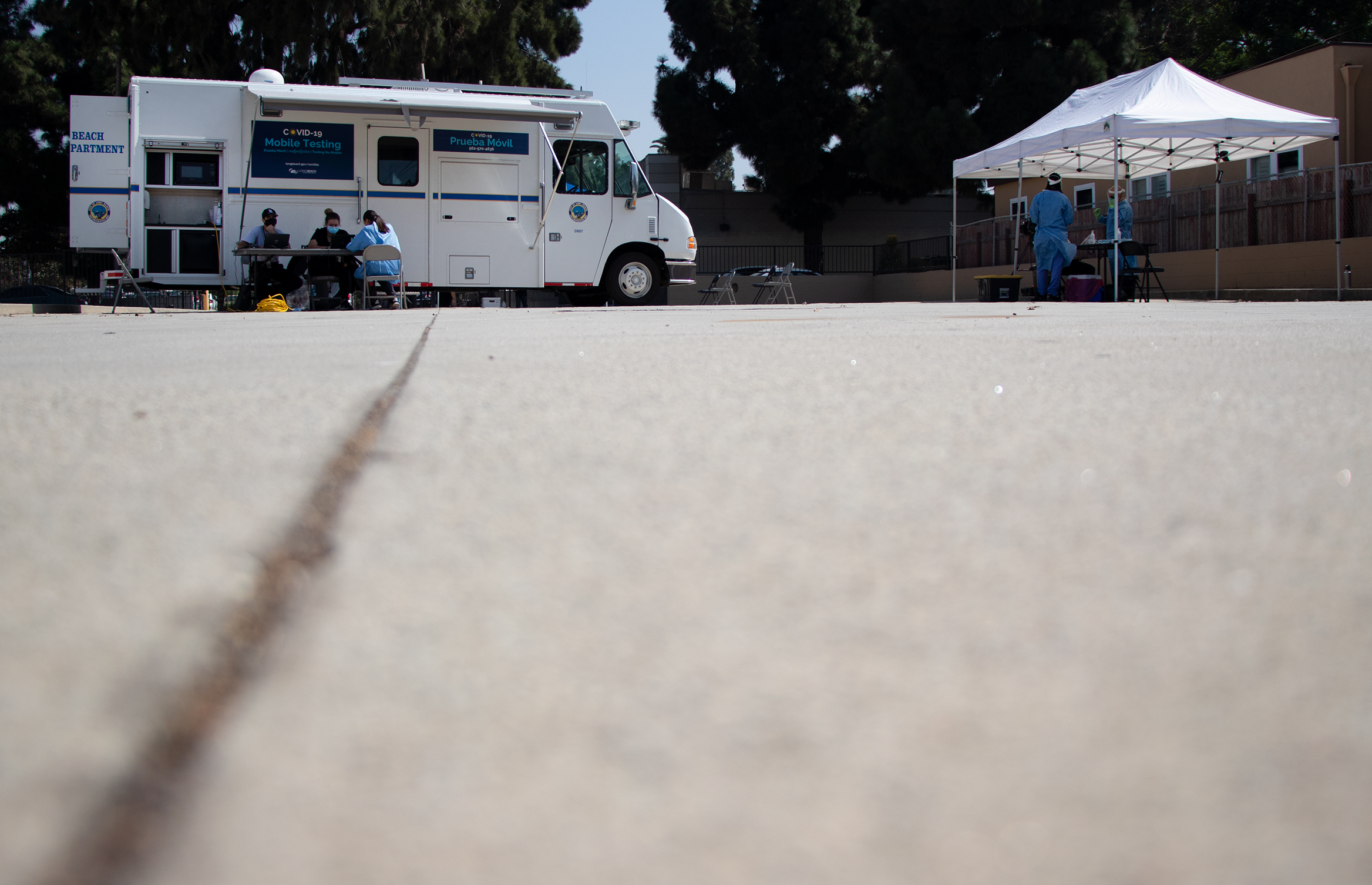 City health workers wait for patients to trickle in on the first day of operating a COVID-19 mobile testing program stationed in the rear parking lot of Westside Christian Church on Wednesday, Sept. 23, 2020. Photo by Crystal Niebla.

The city, Hernandez said, didn’t reach out to her about the new mobile testing program. Long Beach instead partnered with CHIRLA, a regional immigrant advocacy group, to assist with the new mobile program.

When asked at Tuesday’s press conference why the city waited so long, Mayor Robert Garcia conceded that officials should have acted sooner.

“This is something that should have been happening months ago,” he said.

Early on, the city did establish testing clinics at Cabrillo High School in West Long Beach and Jordan High School in North Long Beach, but the mayor said over the past few months, officials have learned that undocumented communities and immigrants were hesitant to show up.

“We needed to change the way we were communicating and providing the test to them,” he said.

City officials said the new mobile-testing units will be able to provide up to 300 additional tests per day and touted the program as the first of its kind, which is tailored to specifically help individuals who are undocumented. For now at least, the program will be in place just this week, with future testing times and locations to be determined once the city sees how the public responds, according to city spokesman Kevin Lee. 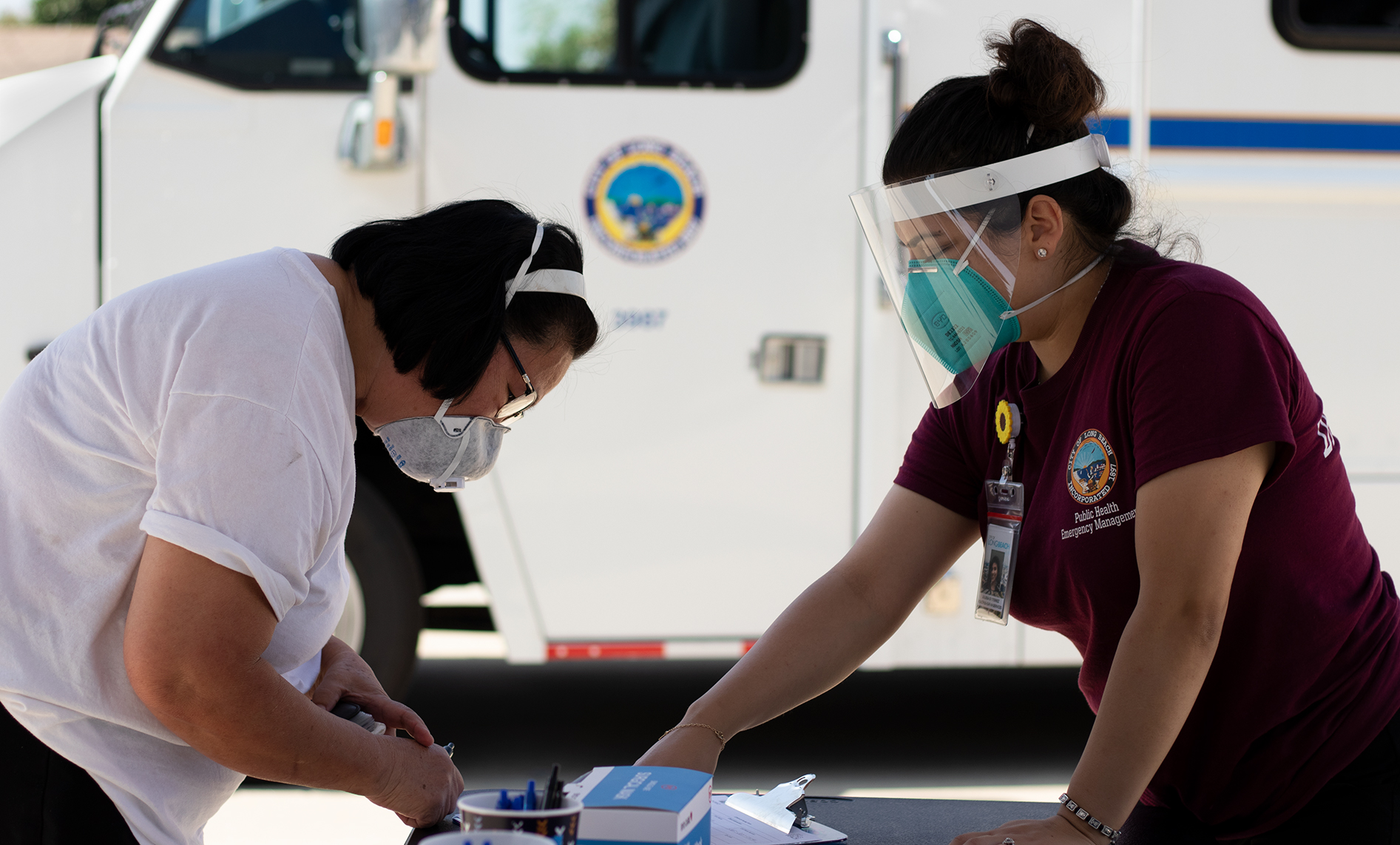 Julissa Gutierrez, right, helps a resident fill out a form to take a swab test at on the first day of launching a COVID-19 mobile testing program stationed in the rear parking lot of Westside Christian Church on Wednesday, Sept. 23, 2020. Photo by Crystal Niebla.

In April, when the city saw a spike in infections, officials noted that the novel virus impacted communities of color at a higher rate than more affluent parts of town. State and local health agencies said months ago that Latino and Black communities were hit the hardest by the coronavirus pandemic. Data shows that these communities are more likely to suffer from underlying health issues that could make COVID-19 infections deadly.

“We have been providing testing in those communities all along,” Colopy said. “When we first set up all of our tests sites, we looked at our data and began to understand where folks were, but what we’ve really understood is that even though the testing might only be half a mile away that people weren’t willing to go.”

Cases of coronavirus, as in Los Angeles County, spiked in July, and have since fallen after more restrictive health orders were put into place. The peak of new cases was July 16, when the city reported 251 new cases. On Wednesday, the city reported 35 new cases.