More than at any other time during the pandemic, Long Beach is now seeing organized, sustained pushback to coronavirus rules, particularly one that recently banned all dine-in service at restaurants.

Over the last week, there’s been a flurry of publicity stunts and protests planned from at least three different factions—sometimes stepping on each others’ toes—as they try to paint local officials’ reaction to the worsening pandemic as misplaced or draconian.

The resistance arrives at a crucial moment for Long Beach and the rest of the region as it tries to stem the worst outbreak of cases since the coronavirus arrived. Even as the protests grow more organized, Long Beach is weighing whether it will implement stricter rules like Los Angeles County has, banning almost all gatherings and putting even tighter occupancy limits on businesses to try to avert a crush of cases from overwhelming hospitals.

On Monday, Gov. Gavin Newsom warned that some hospitals’ intensive care units could run out of room in a matter of weeks if the surge in cases doesn’t subside soon. And in LA County, “the virus is running rampant,” Public Health Director Barbara Ferrer said. She warned that wearing masks and abiding by health guidelines are the only ways right now to control this unprecedented spike in cases.

Nevertheless, here’s who’s organizing the pushback to the new rules and why they say they’re doing it: 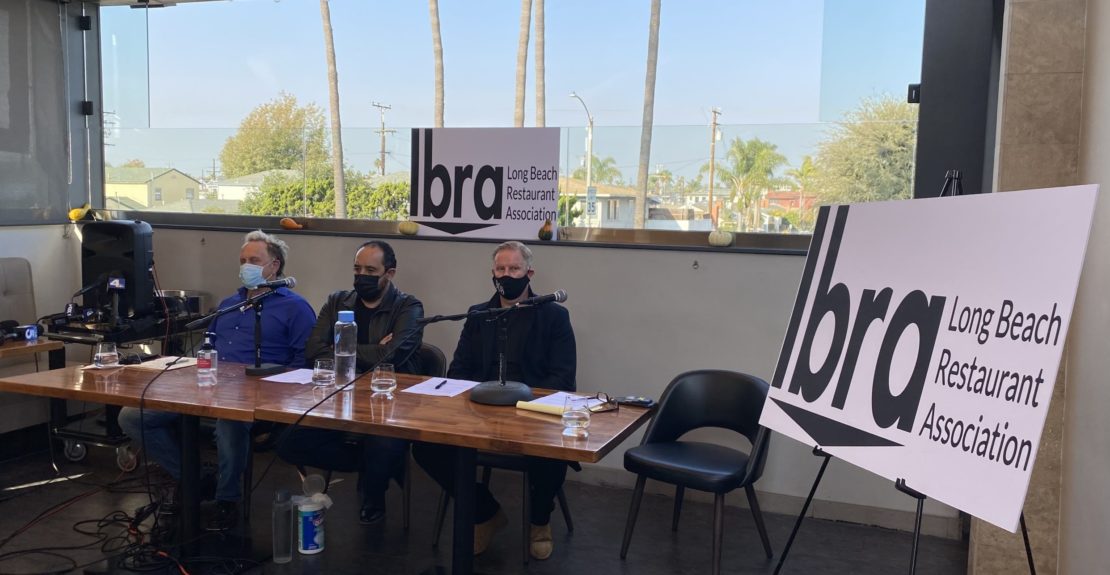 Members of the Long Beach Restaurant Association during a news conference on the rooftop patio at Michael’s in Naples.

Since forming over the summer, a coalition of local restaurants called the Long Beach Restaurant Association has gotten more organized—hiring a partner at the well-known lobbying and PR firm Englander Knabe & Allen to work as its spokesman.

At a news conference Wednesday, they started putting public pressure on City Hall to reverse a decision shutting down all dine-in service at restaurants. This week, they’re encouraging members to weigh in at upcoming City Council meetings.

They argue the city may destroy the local restaurant industry without having any proof that they are causing the recent surge in coronavirus cases.

Health officials say it’s impossible for them to have that proof because most people don’t know where they were infected. But they point to a CDC study that found adults who tested positive for the coronavirus were more likely to have dined out recently than people who tested negative. They also point out that restaurants are inherently risky because they’re one of the only places people are allowed in close quarters without masks on. 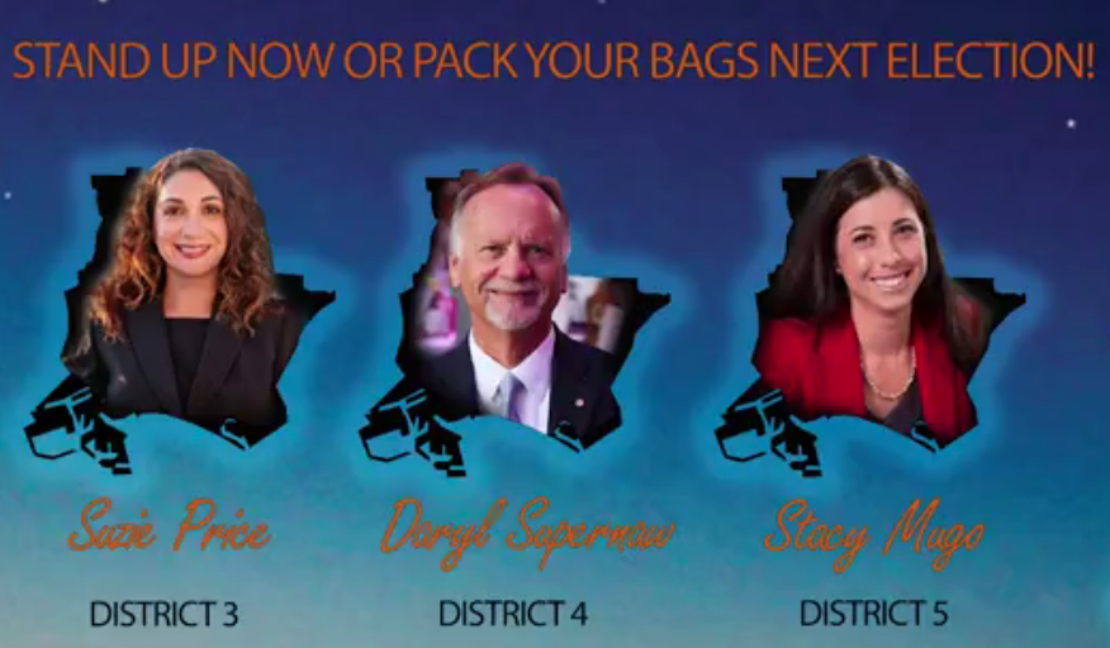 A portion of a graphic circulated by activists who parked U-Hauls outside council members’ houses.

On Thanksgiving, three U-Haul trucks appeared in East Long Beach, each outside of a local council member’s home. The trucks made a stir on social media and even prompted police to look into it.

But Matt Fleischmann, a private investigator who said he organized the demonstration, said the stunt was meant to be a tongue-in-cheek message to the three council members that they need to stand up for local businesses “or move out.”

Fleischmann said he and Tony Nieri, a friend who worked in the restaurant industry until recently, planned the stunt over the span of a couple of days and invited a handful of people to stage Thanksgiving dinners in protest on the sidewalk outside the politicians’ homes.

“We are normal people that are going to use comedy to send a message and hopefully evoke some change,” Fleischmann said.

Fleischmann said they picked the homes of council members Suzie Price, Stacy Mungo Flanigan and Daryl Supernaw because they saw the three as the most likely allies. The trio recently floated the idea of lobbying the state to reopen indoor dining in limited capacity before the recent surge in cases prompted them to drop the suggestion.

The U-Haul stunt, however, drew condemnation from the Long Beach Restaurant Association, which called it an “act of intimidation.”

Fleischmann brushed off the criticism, saying he talked to police about the demonstration beforehand. He said he’s also planning another “niche protest,” this time with a Christmas theme.

“This is the way we vent our frustrations and our positions,” he said.

Mungo Flanigan, who spoke with the group outside her house, stopped short of endorsing the group’s message but said she appreciated their comedic approach. 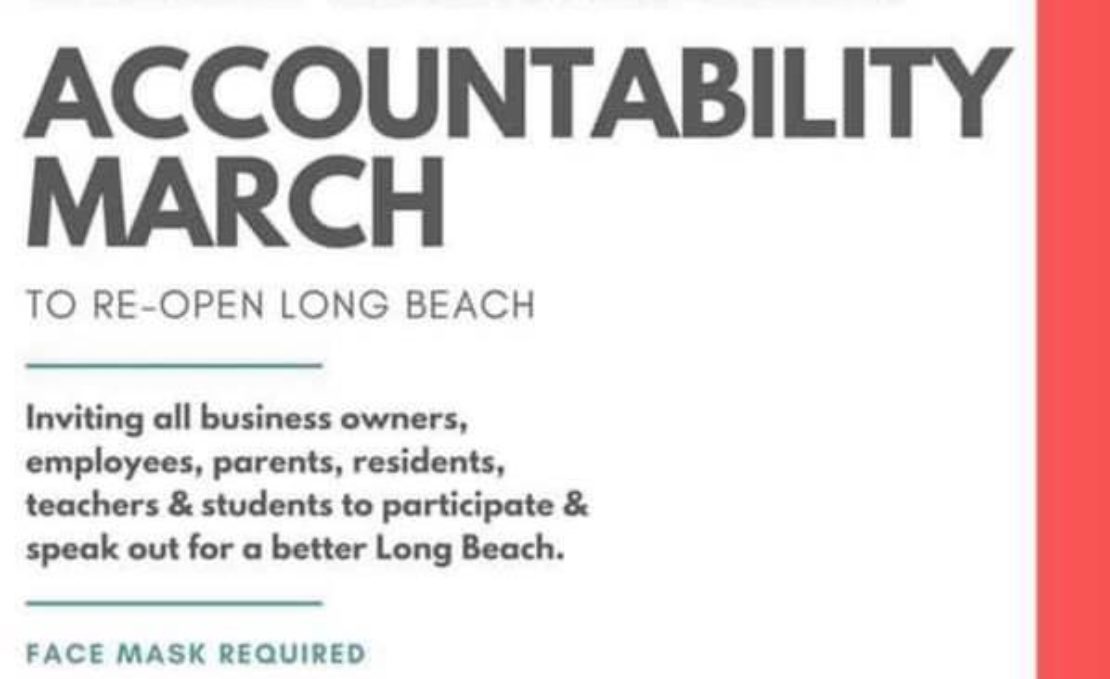 A portion of a graphic circulated by organizers of an “accountability march” protesting coronavirus rules.

A march with big backing

A march scheduled for Wednesday afternoon starting at the 2nd & PCH shopping center may have the most powerful backing yet for any local demonstration.

“We believe that Long Beach is in a time that it needs a higher level of accountability for our elected and appointed officials,” Choura said in an interview Monday.

Choura said he’s been frustrated with the lack of pushback from local officials on coronavirus rules, and the restaurant closures were a tipping point.

“I’m not hearing any politician speak out and say, hey, are you guys crazy? Shutting down cannot be our only option,” he said. “Maybe you go to 50% (capacity), maybe you go to 20%, but a 100% shutdown is not an honest and not a fair plan. It’s not realistic for our community.”

Choura’s group has also laid the infrastructure to have a continued political impact. In October, they formed a political action committee called the Accountability PAC.

Last month, Choura promoted the committee by posting a photo of himself, Bryson and Mungo Flanigan. On Monday, Choura said the councilwoman wasn’t directly involved, but she’d helped talk the group through how to get started.

Since then, they’ve been raising money and support from local businesses and parents worried about Long Beach schools being closed, Choura said. The march Wednesday is the next step.

“The biggest thing I hope for in this march is that it’s filled with the people who make up the small businesses, that it’s not just owners,” Choura said. 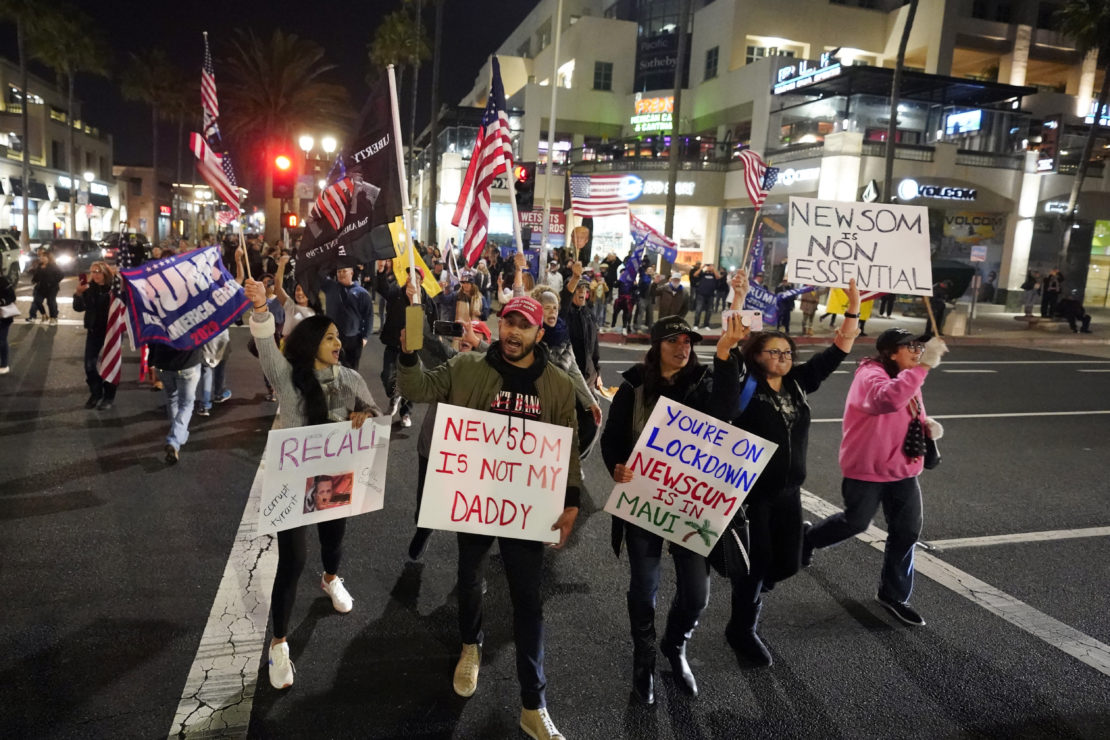 Demonstrators march across Pacific Coast Highway while shouting slogans Saturday, Nov. 21, 2020 during a protest against a stay-at-home order amid the COVID-19 pandemic in Huntington Beach, Calif. AP photo by Marcio Jose Sanchez.

Orange County and Los Angeles County have also seen their own protests against COVID-19 restrictions.

Demonstrators took to the streets in Huntington Beach to defy the overnight curfew on businesses Newsom issued earlier this month.

On Sunday, about 50 people chanted and waved signs outside the home of Ferrer, the Los Angeles County Public Health Director.

In a media briefing Monday, reporters asked Ferrer for her reaction to the demonstrators.

“People everywhere have the right to protest and express themselves. When they’re unhappy that can be upsetting, but that is their right, and I’m assuming that people will continue to exercise their rights,” she said. “My hope is that it’s a relatively small group of folks, and doesn’t detract from the most important task in front of us. If we don’t get this virus under control, it will cost all of us dearly.”