More than 100 people gathered outside Long Beach City Hall Sunday afternoon for another rally in support of the Black Lives Matter movement. The latest demonstration marks a week since protests began sweeping through the city decrying police abuses.

“This is not a moment, this is a movement, and it doesn’t take one day to solve,” said Long Beach resident Meghan Buchanan.

The demonstration was one of several that took place throughout the week following the massive protests and unrest on May 31, which was sparked by the death of George Floyd, who was pinned under the knee of a Minneapolis police officer now charged with murdering him. 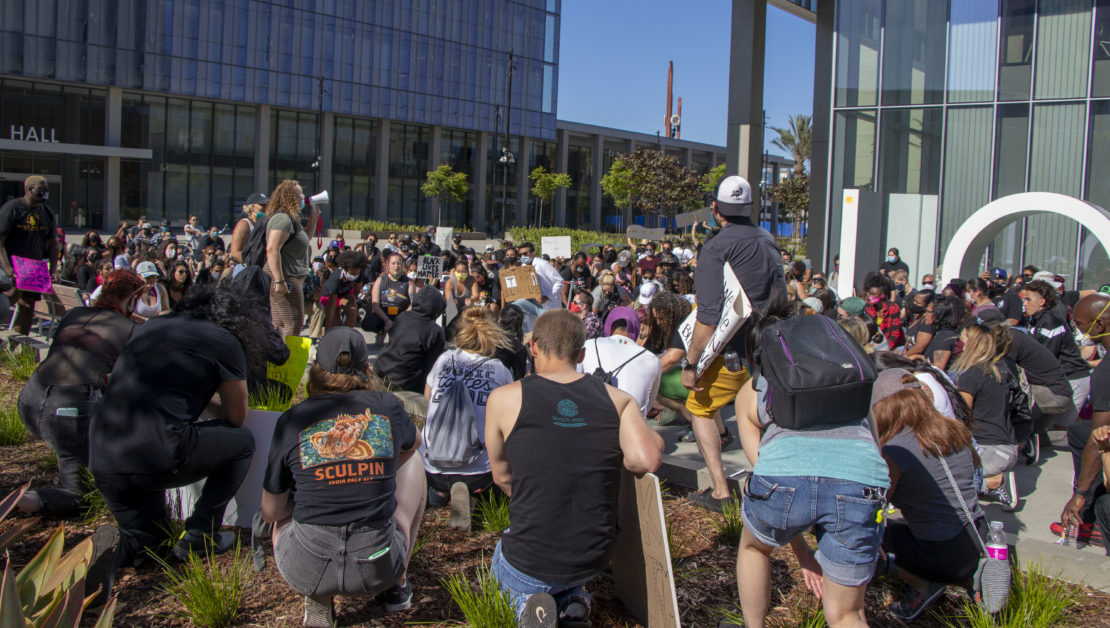 A facilitator of the rally asks the crowd to take a knee for a moment of silence outside Long Beach City Hall on June 7, 2020. Photo by Crystal Niebla.

“I am George Floyd,” said Raj Donald, a 49-year-old Signal Hill resident. “I’ve been at the end of police guns doing absolutely nothing.”

A flyer on social media called for peaceful protesters to meet at 3 p.m. at Bluff Park before marching down Ocean Boulevard to City Hall. More than 100 people marched through lanes of Ocean Boulevard before meeting up at the final destination.

Over the past week, thousands of people have demonstrated across Long Beach in a string of large marches. More protests are expected Monday.

Protesters chant one last time and wrap up the demonstration at 4:45 p.m. #GeorgeFloydProtests #LongBeach pic.twitter.com/iOwrjcGWmS