A protest march led by two local businessmen kicked off near the 2nd & PCH shopping center on Wednesday afternoon, marking the latest in a string of organized events to push back against stricter coronavirus health orders.

The “Accountability March,” which attracted several hundred people, was set to head west down Second Street toward Naples. The march was organized by Ryan Choura and Trent Bryson to demand better justification for the new rules.

“We believe that Long Beach is in a time that it needs a higher level of accountability for our elected and appointed officials,” Choura said in an interview Monday.

At the outset of the march, Choura added that he would like to see the Long Beach Health Department act independently of Los Angeles County.

Organizer Ryan Choura said the city should break away from LA County. He asking “for fairness.” @LongBeachPost pic.twitter.com/xNBXNgu4bz

In addition to Wednesday’s event, the group has also formed a political action committee called the Accountability PAC.

Protesters began marching from 2nd & PCH toward Belmont Shore around 3:30 p.m. and, by about 4:15, the crowd of several hundred had shut down traffic in both directions for the block between Corona and Nieto avenues. The march ended peacefully, soon after. 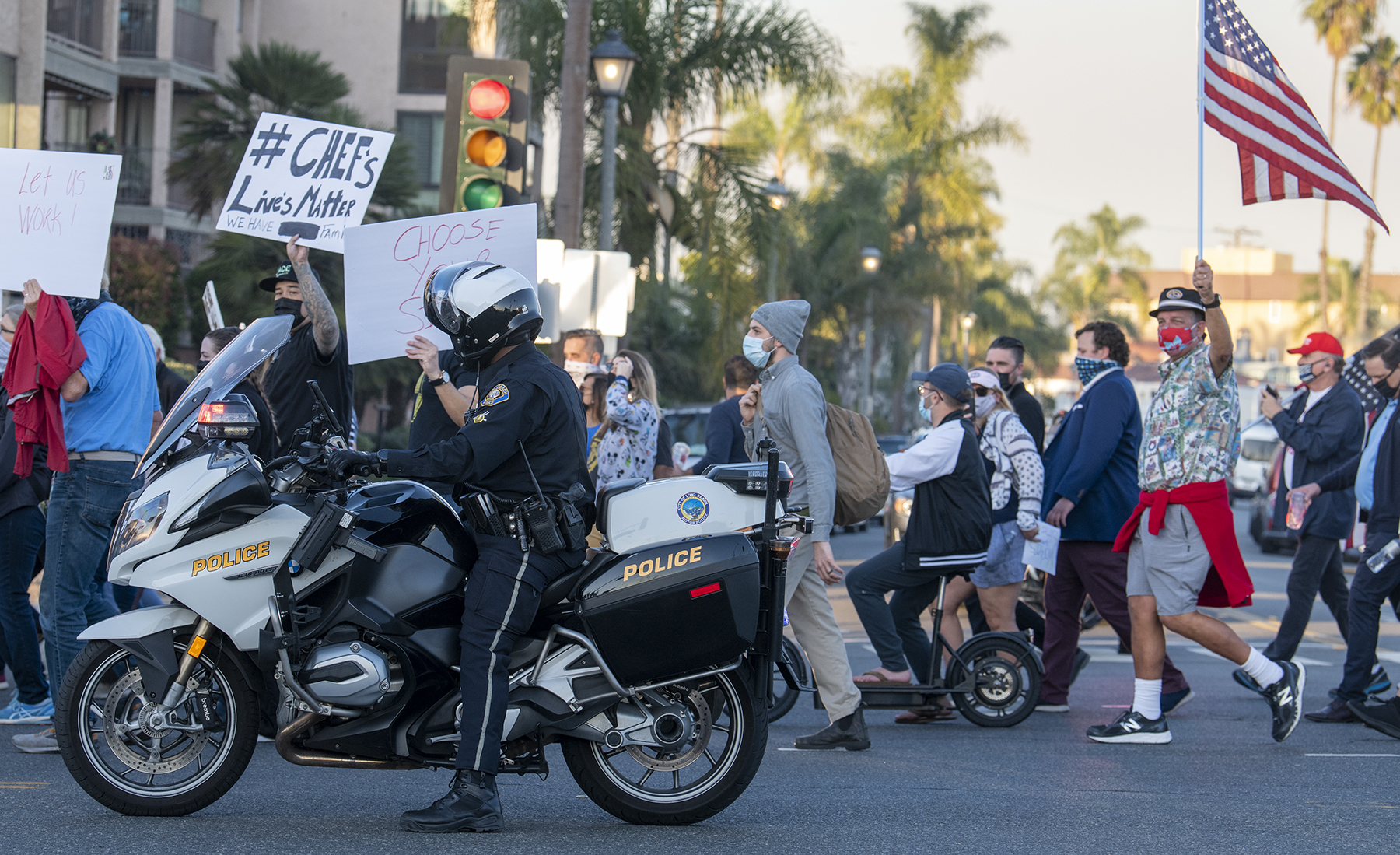 As Long Beach and the nation struggles to stem a dramatic jump in COVID-19 cases, the city early Wednesday issued a new round of restrictions that limit business capacity and most public and private gatherings.

The latest health orders come on top of last week’s countywide ban on all outdoor dining at restaurants for at least three weeks to slow the surge in cases.

Long Beach on Tuesday reported a record 1,264 new cases in roughly a week, the highest spike since the start of the pandemic.

The health orders have been blasted by local business owners who say the ban on in-person dining and other restrictions could destroy the local restaurant industry and leave thousands out of work.

Alex Hernandez from the popular Alex’s Bar in Long Beach, said he was open for four weeks before he had to shut down again under health orders.

“I lay awake worrying every night,” he said. “I wonder at what point do you give up?”

Robert Duval, a chef at Jade restaurant in Marina Pacifica, said he had layoff 95% of his staff.

“It was heartbreaking to tell them I don’t know when we can hire them back,” he said. “Last time they said three weeks, we were closed for six months.” 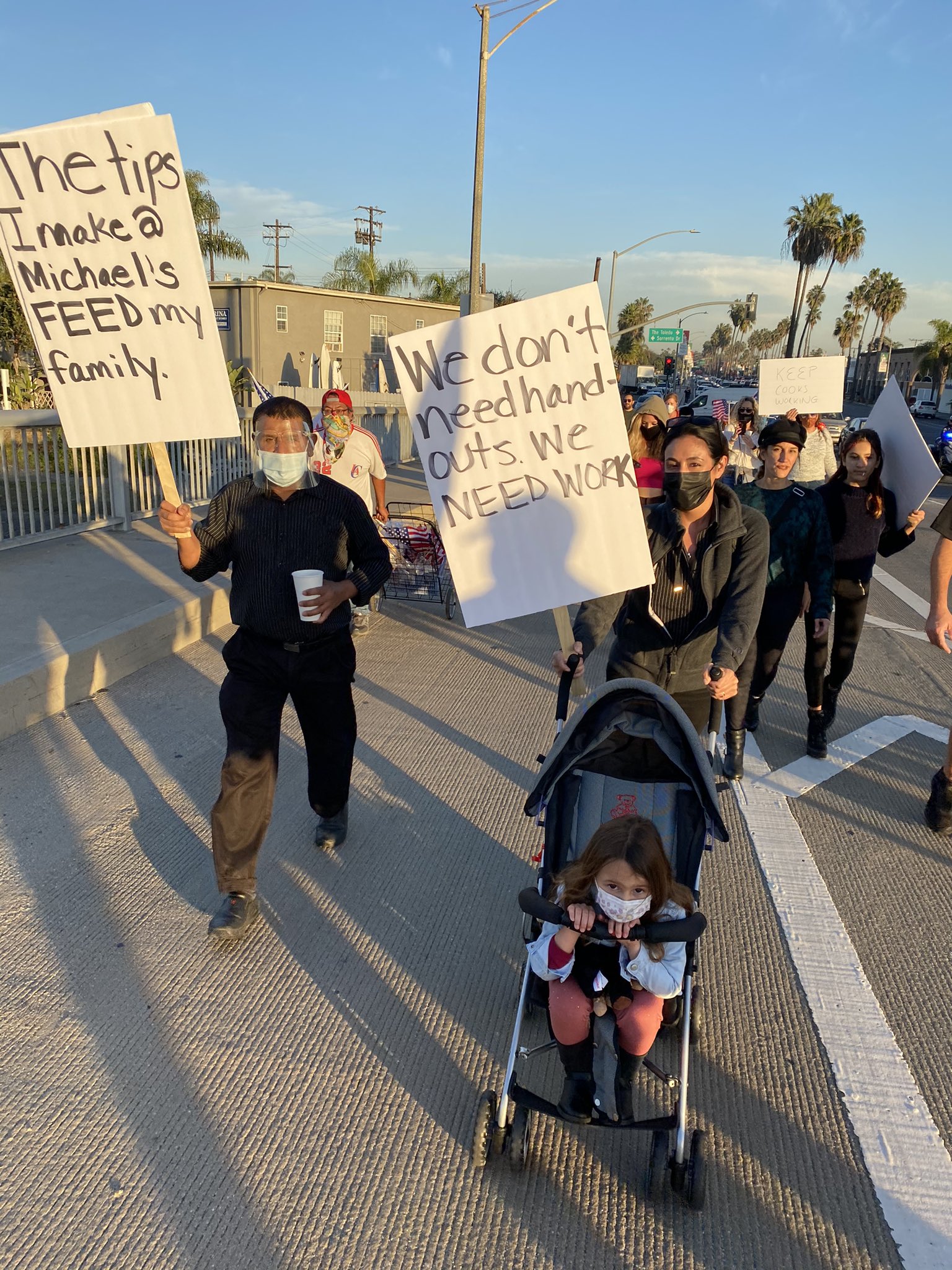 Sara Sciamana and Ari Martinez were both laid off from Michael’s. Sciamana, a server, pushing her 4-year-old daughter, said she’s been laid off twice this year. “I don’t know what I’m going to do. I might go back to school.” Photo by Kelly Puente.

Another protest organized by local businessmen is schedule for Dec. 12 outside of Long Beach City Hall.

The march comes as other cities are starting to push back against the county’s stricter health orders. This week, the Beverly Hills City Council unanimously approved a resolution opposing the county’s ban outdoor dining, while Pasadena, which has its own health department, has opted to allow outdoor dining to continue.

Long Beach, which also has its own health department, has aligned itself with the county, prompting an outcry from local business owners who argue that the city should act independent of the county. 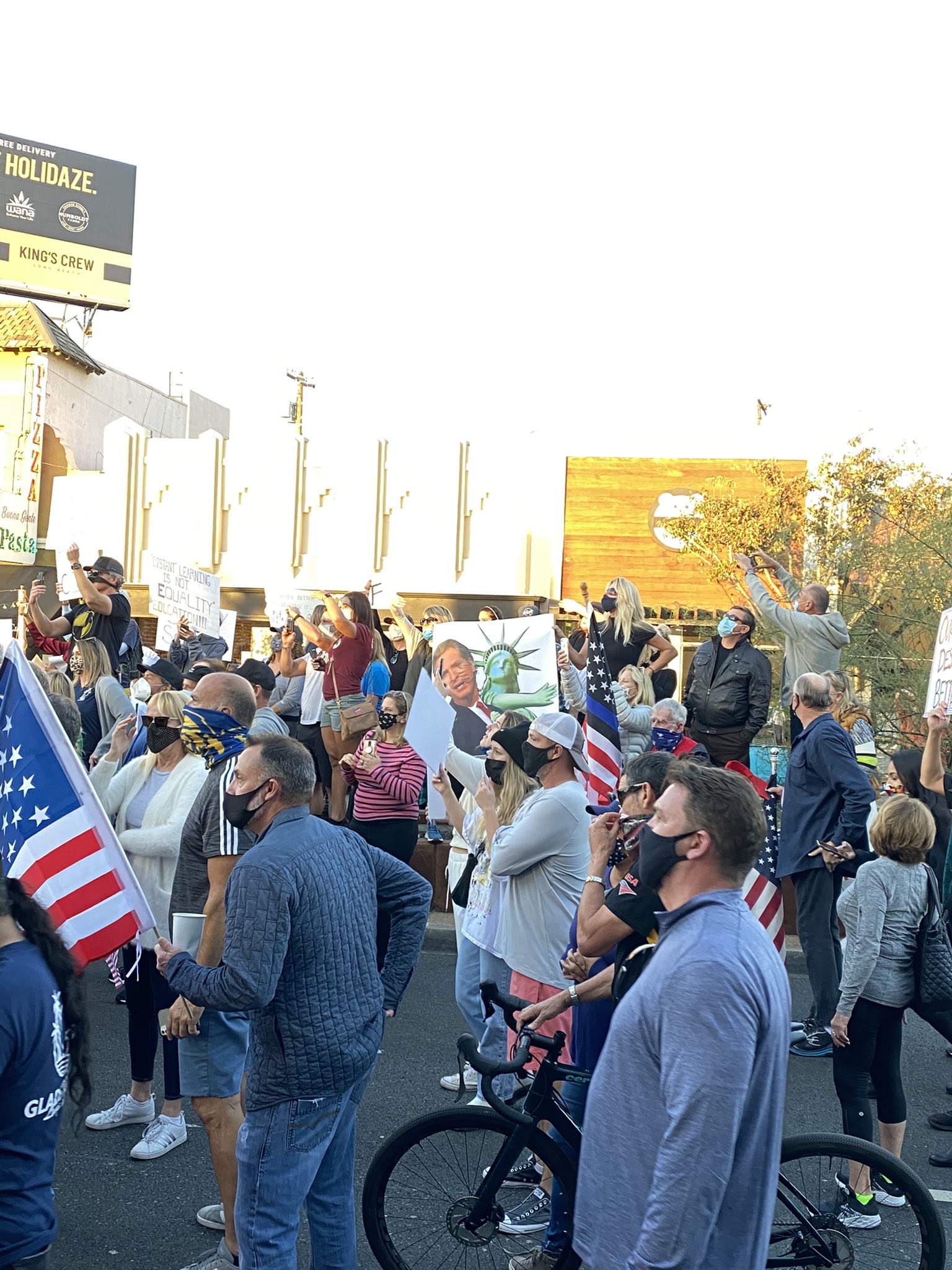 Protesters shut down Second Street in both directions for one block. Photo by Kelly Puente.

In response to the protests, Long Beach Health Department Director Kelly Colopy on Tuesday said the city is seeing an alarming spike in cases similar to the county numbers.

Colopy has said she is basing her decisions on case rates, hospitalizations and information from the Centers for Disease Control and Prevention.

And while many bars and restaurants are “doing a good job” in following health orders, she said, others have not been as careful.

“We’re concerned about how we keep people safe in those situations,” she said. “This is the choice that we made based on the data and based on what we’re seeing in the community.”