For decades, oil producers and other heavy industrial companies have operated along Paramount Boulevard and Cherry Avenue in North Long Beach next to residential neighborhoods.

The second phase of a rezoning plan specific to North Long Beach will attempt to address that.

It focuses on the region’s industrial core in an effort to attract companies that produce less pollution and create a cohesive development plan moving forward, according to city planners.

Richardson explained that a residential neighborhood in North Long Beach might include houses, tire and auto-repair shops, liquor stores and motels lined up next to each other. He said this has led to long-term problems such as crime, storefront vacancies and graffiti.

“Chronic issues in North Long Beach are directly tied to land-use policy,” Richardson said. “You can have five motels clustered together, but no tourism—that’s bad land use.”

Richardson proposed the Uptown Planning Land Use and Neighborhood Strategy—UPLAN for short—to restructure the region’s jumbled development. The strategy included in-person community events where residents told city planners the types of developments they wanted to see.

The second phase would implement neo-industrial zoning to allow businesses with a light industrial focus. Currently, the region is marked as General Industrial, which allows for a wide range of industries that “may not be desirable in other districts,” according to the city’s municipal code. Businesses there have an emphasis is on heavy industrial and manufacturing uses. 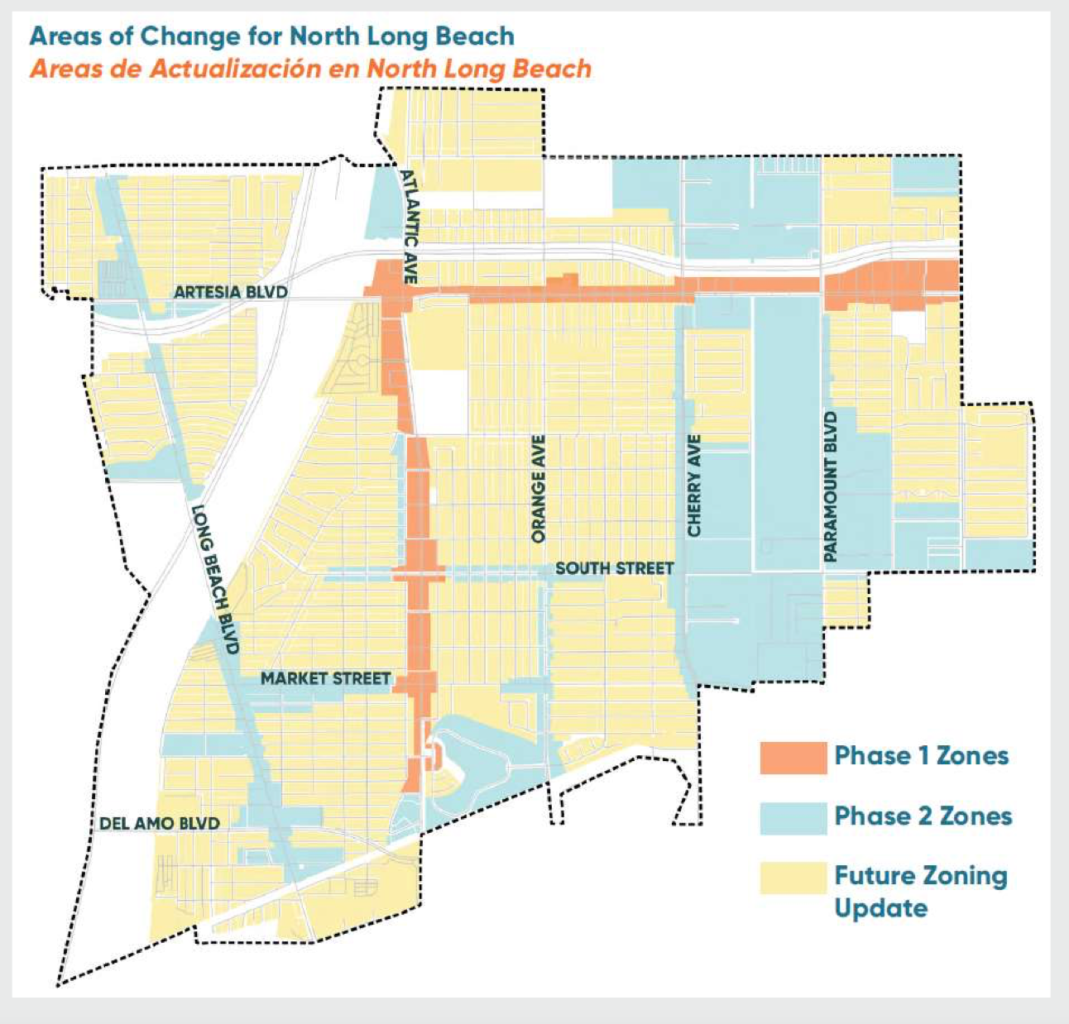 A map of North Long Beach where city planners are changing zoning codes to allow for different businesses and residential buildings to be built. The second phase focuses on the region’s industrial area and other main streets. Photo courtesy City of Long Beach.

The city council adopted the first phase of the UPLAN last year that focused primarily on changing zoning codes along major retail corridors in the area to allow for mixed residential use on Atlantic Avenue and Artesia Boulevard.

This has allowed developers, such as LAB Holding, to propose mixed-use projects to allow for residential homes and small businesses. Developers Brandywine Homes won approval from the city’s planning commission for 84 town homes earlier this month, yet another example of the types of developments city planners are trying to attract in North Long Beach.

Light-industrial zones would allow office spaces for research and development in technology, engineering, design and creative sectors among others, according to city planners.

“Limited retail and services are also permitted to support the day-to-day needs of workers employed in these areas,” Patricia Diefenderfer, Planning Bureau manager, wrote in an email.

During a planning commission meeting this month, city planners said that just 20% of residents who make more that $3,333 a month both live and work in North Long Beach. About 47% of workers commute into North Long Beach and 41% work outside of the city’s northern neighborhoods.

Joni Ricks-Oddie, a North Long Beach resident and vice chair of the city’s planning commission, said the second phase of the UPLAN could bring small-business incubators and more job opportunities closer to the neighborhood.

“It was very clear that people who live in North Long Beach don’t work here, residents commute out,” Ricks-Oddie said. “We have an imbalance in the type of business sectors here and because the intent is small incubators and co-working spaces, those are all types of commercial spaces from the community who wants to start small businesses, and it supports that idea to live where they work.”

If the council adopts the second phase as they did the first, the zone changes wouldn’t immediately impact businesses that are already operating under heavy industry zone codes.

Diefenderfer said businesses are allowed to remain as “grandfathered” use. That means that as long as the business remains in place, they can continue operating as they have before.

Ideally, as land turns over and heavy industrial tenants leave, new businesses that come the North Long Beach will have to comply with the new zoning.

City officials are tentatively aiming to bring the zone changes to the planning commission for review before the end of the year. From there, the city council will decide sometime in early 2022 if it wants to adopt the changes.

North Long Beach is about to get a major zoning update, here’s what that means