Shootings in Long Beach increased 58.9% during the first half of this year and the number of people wounded in those shootings also rose 55%, according to Police Chief Robert Luna, who compared the spike in gun violence to a raging blaze consuming a building.

“We’re trying to put the fire out,” Luna said at a news conference Friday where he, the mayor and the city manager said Long Beach is working on a “safety recovery plan” to address the problem.

City Manager Tom Modica will soon bring the plan to the City Council, but for now, Luna said his department is battling the violence by seizing almost 200 more firearms than last year and arresting dozens of more people prohibited from owning them. 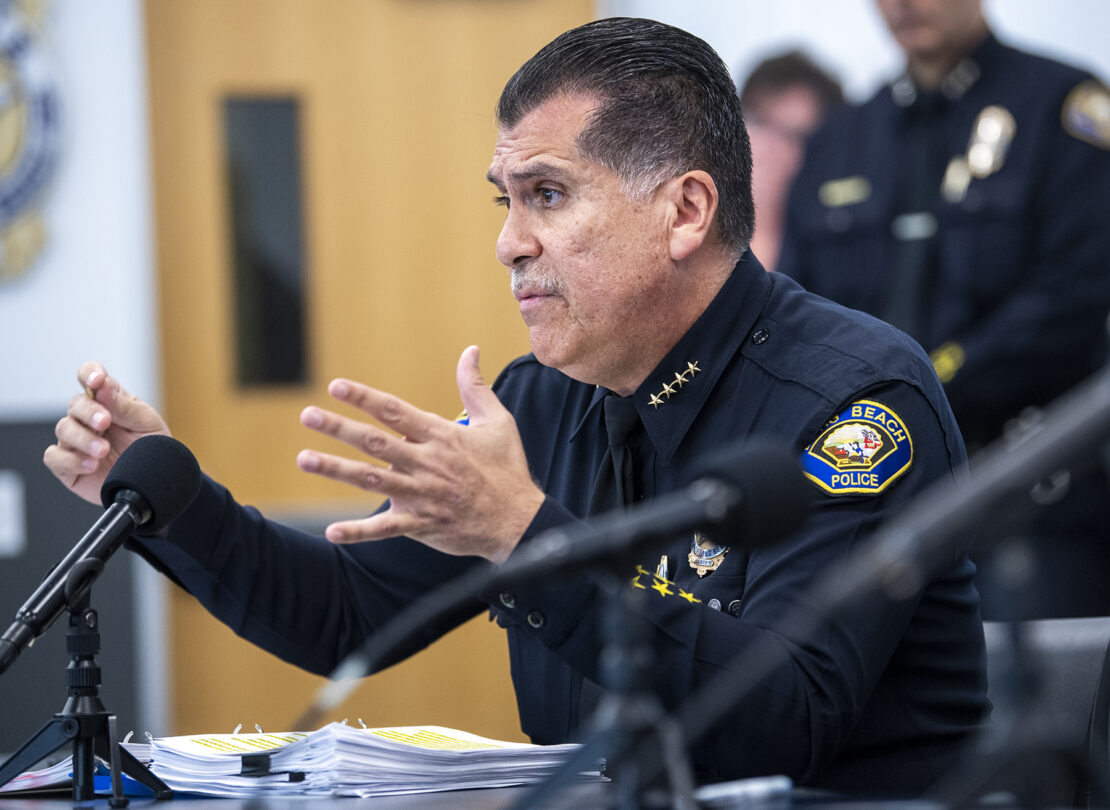 Over 50% of the 528 guns officers have confiscated so far this year were found during traffic stops, according to Luna.

Across the state, handgun sales surged 65.5% last year, along with a 45.9% increase in rifle sales, according to new numbers from the California Department of Justice this week.

Police chiefs across the state have pointed to more guns and an increase in untraceable “ghost guns” as one cause of the spike in murders this year that’s been seen in many big cities across the country.

So far, however, Long Beach seems to have escaped those deadly consequences, with only 19 murders in 2021, down from 21 at this point last year, according to police statistics.

But Luna warned the line between life and death is slim. He said two officers who were near a shooting at The Pike Outlets over the weekend saved a man’s life only because they were able to provide medical aid so quickly.

Overall crime has also risen in Long Beach this year but not as dramatically as shootings.

As of the end of May, crime in Long Beach was up only about 6% compared to aggravated assaults—a category that includes shootings—which spiked almost 32%. Some crimes, including robbery, saw declines.

Luna also said he was frustrated with changes to the criminal justice system during the pandemic, including reduced bail and early release of prisoners intended to slow the spread of COVID-19 behind bars.

“And you got to ask yourself, where did these thousands and thousands of individuals go?” Luna said. “A lot of them are on our streets. A lot of them, our officers are arresting, not once, not twice—three, four, five, six-plus times, only to be seen again two or three days later.”

Mayor Robert Garcia, who has voiced support for criminal justice reforms and the agenda of progressive DA George Gascón, said he too has, “a problem with the way folks were released without any sort of support,” during the pandemic.

“It’s a failure of society to not step up and provide the services—whether it’s education, service, access to jobs, or support—for that person to get their life back on track,” Garcia said.

Modica, the city manager, also said the city is beginning to ramp up community centers, child care and teen programs that are intended to give youth alternatives to “making poor decisions.”

Long Beach has also begun investing in violence interruption programs run out of the Health Department.

More will be forthcoming when Modica presents the promised “safety recovery plan,” according to Garcia.

“So there will be a plan presented for the council to discuss and debate around how we take on this issue around guns, gun seizures, and get the shootings down and continue to keep that murder rate low as well as other types of crime,” he said.