After weeks of deliberation and another grueling meeting that stretched into the early morning hours, the Long Beach Independent Redistricting Commission advanced a single map to a final hearing next week.

The map that moved forward to the Nov. 10 meeting was based on one requested by Commissioner Feliza Ortiz-Licon last week that could provide some big changes to the current City Council district lines.

It would merge a portion of East Long Beach with the California Heights, Bixby Knolls and Los Cerritos Neighborhoods west of Long Beach Airport while thrusting all of El Dorado Park and its neighboring homes into the present day 4th District.

The Port of Long Beach and the Downtown waterfront, currently shared between the 1st and 2nd districts, would be consolidated into the current 1st District. This move would also displace City Councilwoman Cindy Allen from the district she was elected to serve last November.

It would also consolidate neighborhoods on either side of the airport into one district, which some commissioners argued helped to solve the problem of splitting the airport to give residents on the takeoff and landing paths a voice in airport affairs.

“We’re trying to make some concessions where we can and take into account all communities, not just the loudest,” Commission Chair Alejandra Gutierrez said before the vote was taken to advance the map. 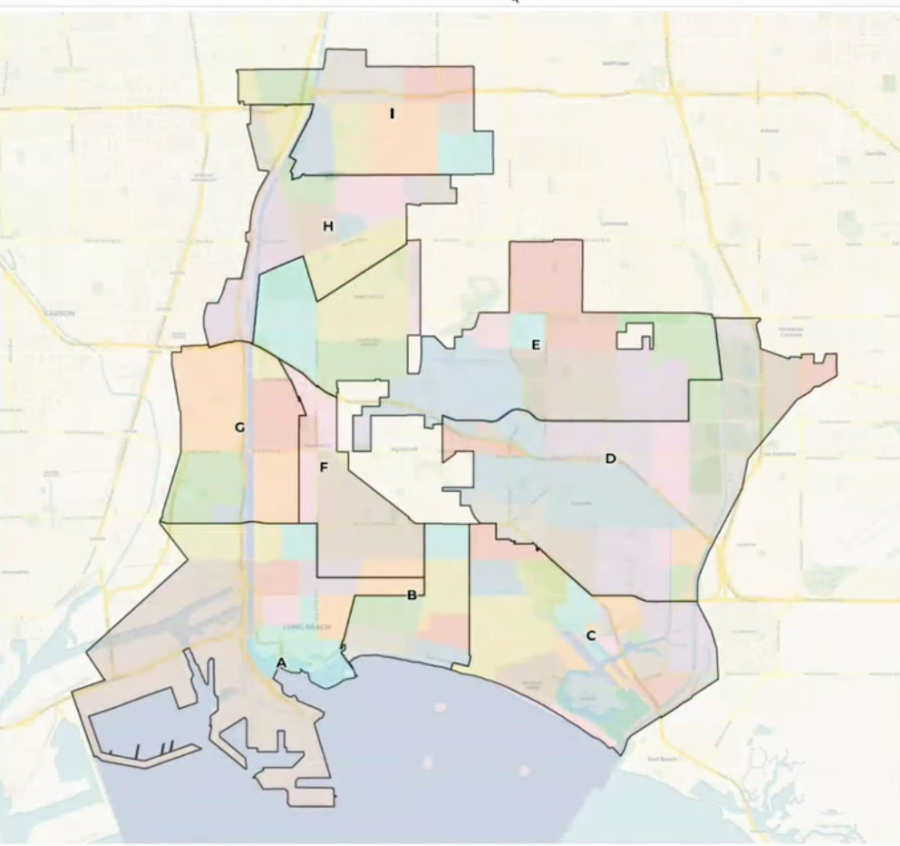 A screenshot of the proposed map two. Small changes were made to include more of the Wrigley neighborhood into District G and to make Pacific Coast Highway serve as the border between Districts C and D.

While the map was the only one to be elevated for consideration next week, the commission is not precluded from selecting additional maps, and altering them, at the Nov. 10 meeting.

The commission is currently scheduled to select a final map at its Nov. 18 meeting, which will consist of a straight “up or down” vote to determine which map will stay in place for the next decade.

The map faced its own criticisms from the public, some of whom objected to the inclusion of neighborhoods west of the airport with East Long Beach, which they said effectively put the two communities on either side of a “mountain range” that is the airport.

Marc Coleman, a lawyer who helped author the ballot measure that created the Redistricting Commission and has helped the Cambodian community advocate for their population to be unified from the four council districts they currently sit in opposed the map, which now has the present-day 2nd District including parts of the Zaferia District in Central Long Beach.

“We do not support maps that cuts us off at Junipero,” Coleman said, adding that the community has nothing in common with the 2nd District or the beach communities and has historically been part of the Anaheim Corridor and should remain that way.

The commission considered and failed to advance two other maps to the final hearing. One, which was tentatively labeled “IRC Draft Map 1,” had garnered broad support from contingents of residents who showed up in droves to previous meetings.

That map kept a number of districts largely resembling their current shapes, and after organized groups’ testimony before the commissioners, was amended to keep all council incumbents in their districts. The commission is not supposed to consider where incumbents or potential candidates for office live when drawing new maps.

It was defeated with an 8-4 vote—the City Charter requires nine votes to advance a map—before Commissioner Thomas Cooper petitioned for the commission to re-vote on the map, noting that a majority of people had expressed support for it.

“I’m not saying that this is what we’re going to decide at the end of the day but I’m saying that we should at least have this as an option for one of our final maps,” Cooper said, as he lobbied for a second vote.

It failed again, with an identical 8-4 margin.

“When you say the majority of the community supports it, that’s the majority that’s here,” Commissioner Marissa Martinez said in response to Cooper.

A second map submitted by residents advocating for the city’s Latino community, which had become known as the “Equity Map,” was also shot down.

Community proponents of the map said that it would preserve a Latino presence on the City Council. However, the manner in which it was drawn, which included several jagged boundaries that split up neighborhoods, one of the things the commission was tasked with avoiding during this process, ultimately led to its defeat.

When the “Equity Map” was put to a vote members of the audience jeered the commission over what they considered to be a gerrymandered map with one man clapping at the commission and stating “you out to be proud of yourselves.”

A final map, or maps, could be selected at the Nov. 10 meeting to be voted on the following week.

The commission has until Dec. 7 to approve a map in time for inclusion in Los Angeles County’s 2022 elections in June but the city has set an earlier deadline to both allow room for additional meetings to be scheduled and to avoid having such an important vote taken during the holiday season.

The city’s charter allows six months for the commission to draw maps but the late release of the Census data this year has forced the commission to do its work in a little less than half that time. It’s scheduled to meet Nov. 10 at City Hall. No start time has been announced.