We’ve all been cooped up in our rooms for months and couldn’t get out, and now it’s time to celebrate the summer. What better way than with our now and future pets? Like the double scoop of ice cream and the bunk beds at summer camp, we’re theming up the adoption-feature section with two events, one on top of the other. 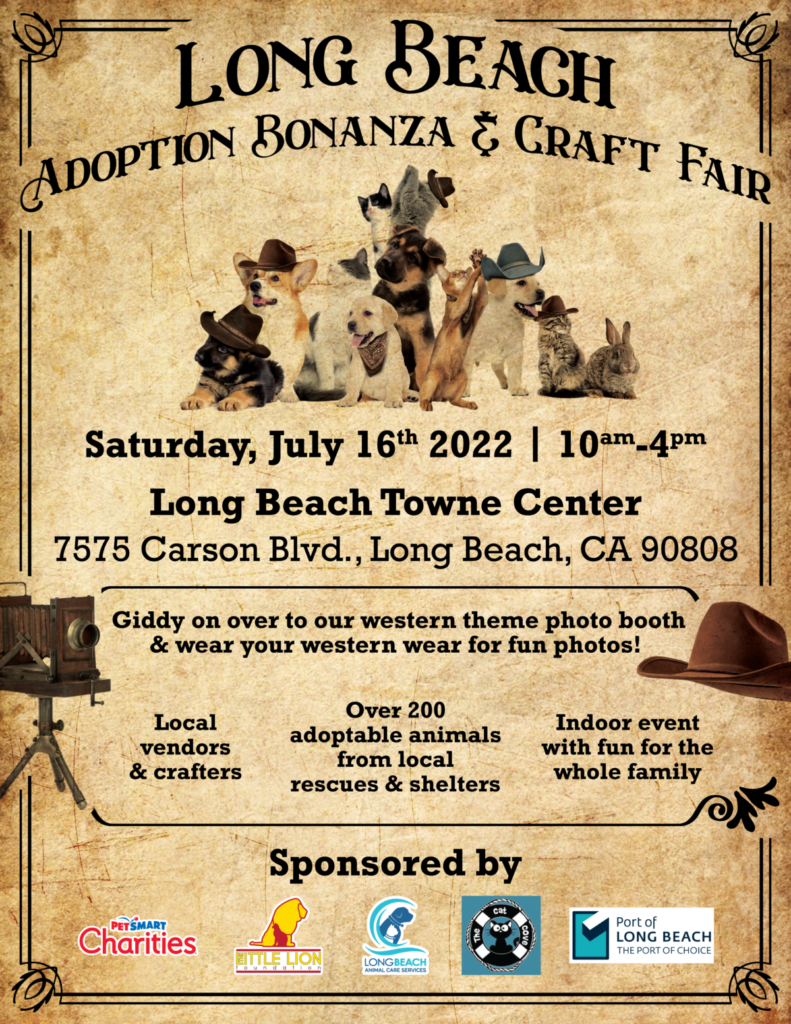 PetSmart Charities is celebrating its National Adoption Week through July 17, and their approved rescues will have adoption events in their local outlets. Helen Sanders CatPAWS will have theirs at the Seal Beach location, 12341 Seal Beach Blvd.

On Saturday, July 16 from 10 a.m. to 4 p.m., The Cat Cove and The Little Lion Foundation will do double-duty as cohosts for another PetSmart charities event: their inaugural summer Adoption Bonanza and Craft Fair. The former Pier One building will be home to handmade crafts for dogs, cats and you: handmade cones of shame to make your pets comfy while their head is poking through a doughnut, clothing and crocheted bandannas for the four-legged and three-legged furries, and animal-themed purses, wallets and totes. Of course, you’ll need a pet to spoil, so if you’re looking for a new best buddy or one for a pet you already share a dwelling with, you can meet the cats and dogs from the hosting rescues and from Long Beach Animal Care Services. The event is Western themed, so slap a 10-gallon hat on your half-pint Chi mix or the 50-gallon whatever-breeds-are-in-that-big-guy-you-adopted and bring them along. All pets must be leashed or in carriers and be well-behaved and vaccinated. Take home a keepsake picture from the photo booth, and purchase raffle tickets for gift baskets and baked goods from the bake sale.

Hot dog, it’s back! After you get home from the craft fair and dump your packages and stroke the fur of your pets, head to Los Alamitos for some silly fun. The Wiener Nationals have been in the deep-freeze since the pandemic spoiled everything, but now, a bunch of cute little trotters from areas near the beach, inland and as far away as Sacramento, Palm Desert and Chula Vista will compete to be named fastest wiener in the West and take home $1,000 to fund their obedience college education.

The field of 107, with 83 first-timers, is the largest in the event’s history. At least four rescue dogs are in the trotting, including 10-year-old Wheezy, the oldest dachshund in the event. Six of the little schatzi bed down in Long Beach. The qualifying races will begin at 6:30 p.m., ending with the championship race at 9:15 p.m. Competitors will have water available to them everywhere along the course.

The inaugural Diaper Dash will also take place during the qualifiers. This race features eight adorable pups a year old and younger. The little cocktail wieners will test their paws on the track and possibly become future stars. Moore has seen puppy races at other meets and thinks they’re the funniest things she’s seen at a wiener-dog meet.

“They come out of the box, get real confused, start spinning in circles, go backwards—it’s really precious,” she said. 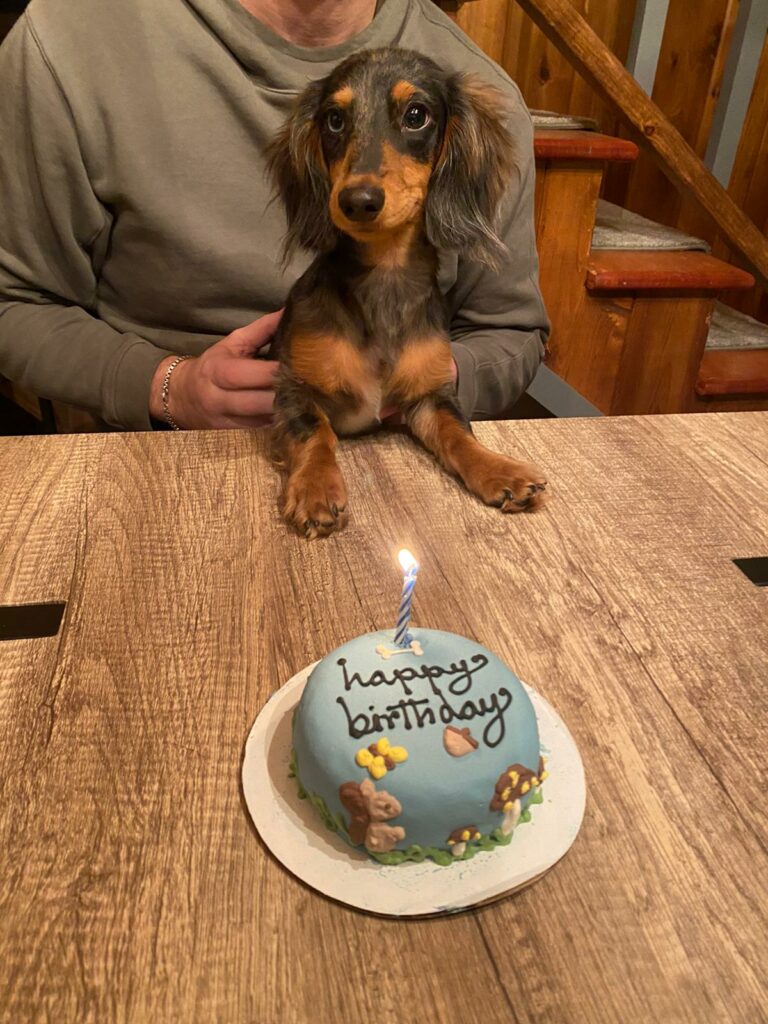 Despite the lightheartedness and hilarity of the event, the humans are like zealous parents at a Little League game, although they’re generally better behaved.

“[The event is] very competitive—this is, like, ‘the’ wiener dog race, and people here are as serious as you’re gonna get,” Moore said. Moore is proud of Jazzy, who has competed in the SoCal Wienerfest, the Old Town Huntington Beach races, and events in Temecula, generally winning second-place awards. 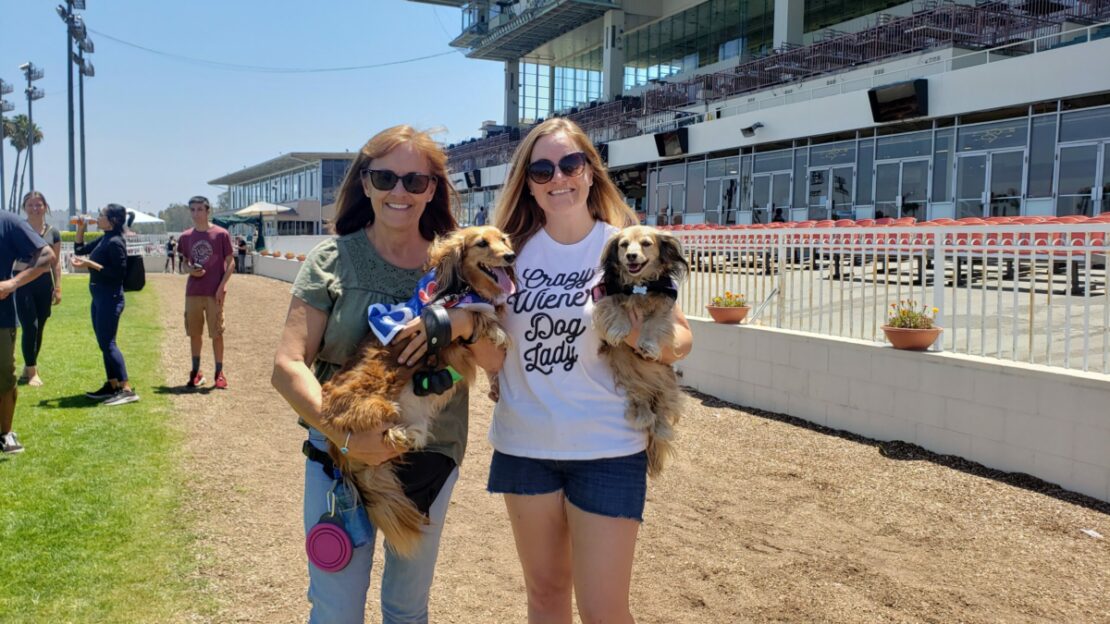 Dani Moore, right, and her little runner, Jazzy, stand proudly with Dani’s mom, Lynne Moore, and her racer, Kynzi. They all have high hopes! Photo by Kate Karp.

Except for the racetrack venue, the Wiener Nationals have nothing in common with horse and dog races in which bets are placed and which animal advocates have taken to task regarding injury to and death of the animals.

“People get the wrong idea—it’s not like horse racing,” Moore said. “This is just for fun. People aren’t keeping their pups in kennels. Wiener dogs are really energetic and run anyway, and this is just a little more organized running. And people aren’t betting on it. There’s no money riding on the line.”

That’s not entirely true, but in the best way possible. The money from ticket and T-shirt sales will benefit the dogs and cats at Seal Beach Animal Care Services. Since its inaugural event, the Wiener Nationals has raised nearly $300,000 for the shelter, which holds on to each of its charges until a forever home is found for them.

“We are thrilled to have the Wiener Nationals back at Los Alamitos Race Course!” said SBACC president Cathy Winans, on behalf of the board of directors. “A big thanks to the dachshunds and their owners who make it such a fun event and to Los Alamitos for supporting our rescues. Everyone comes out a winner!”

A few cats to take home from The Cat Cove. Adoption information here. 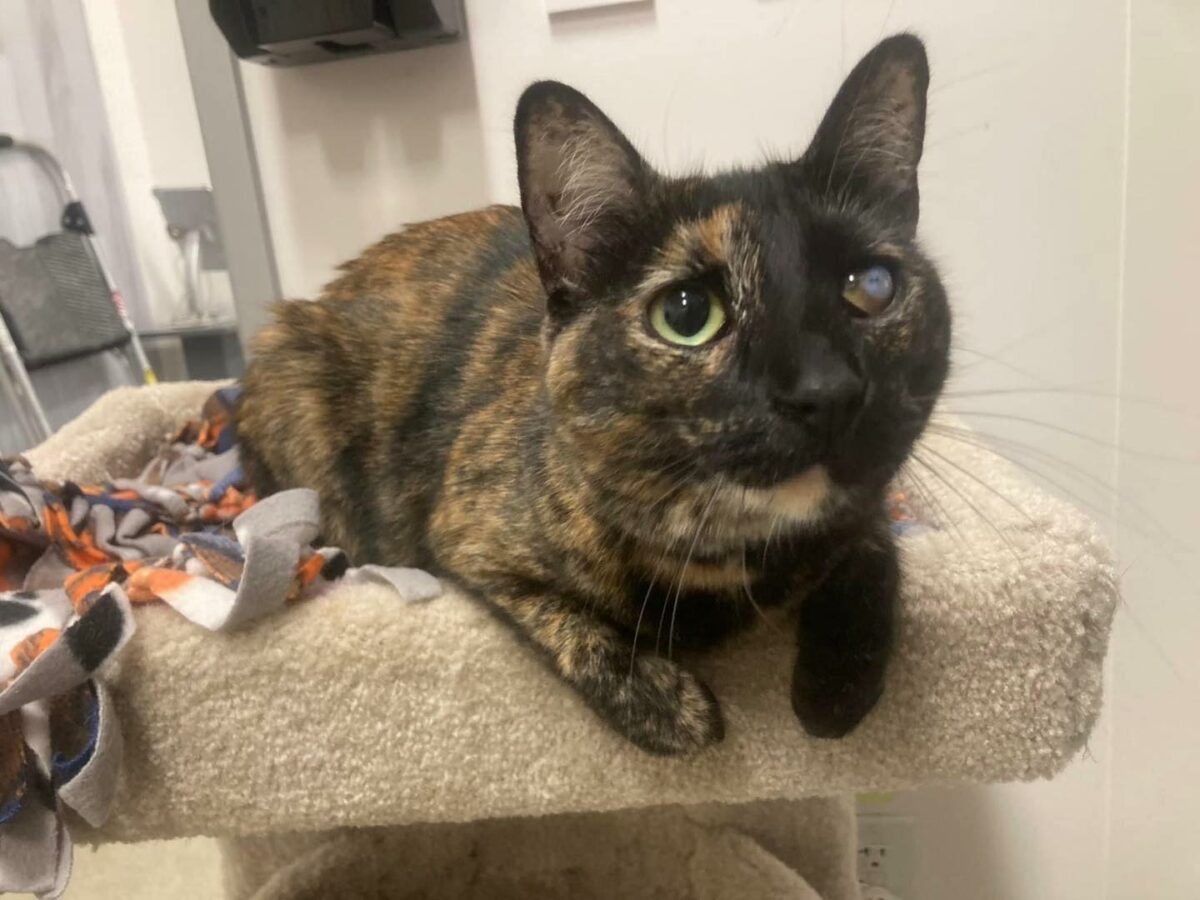 Penny is a sweet 2-year-old little girl. She loves attention from her foster family and will climb into their laps and cuddle with them. Penny was found with a cloudy eye. She has been to The Cat Cove’s vet, who said that it’s either a birth defect or a very old injury that does not require any further care as of right now. 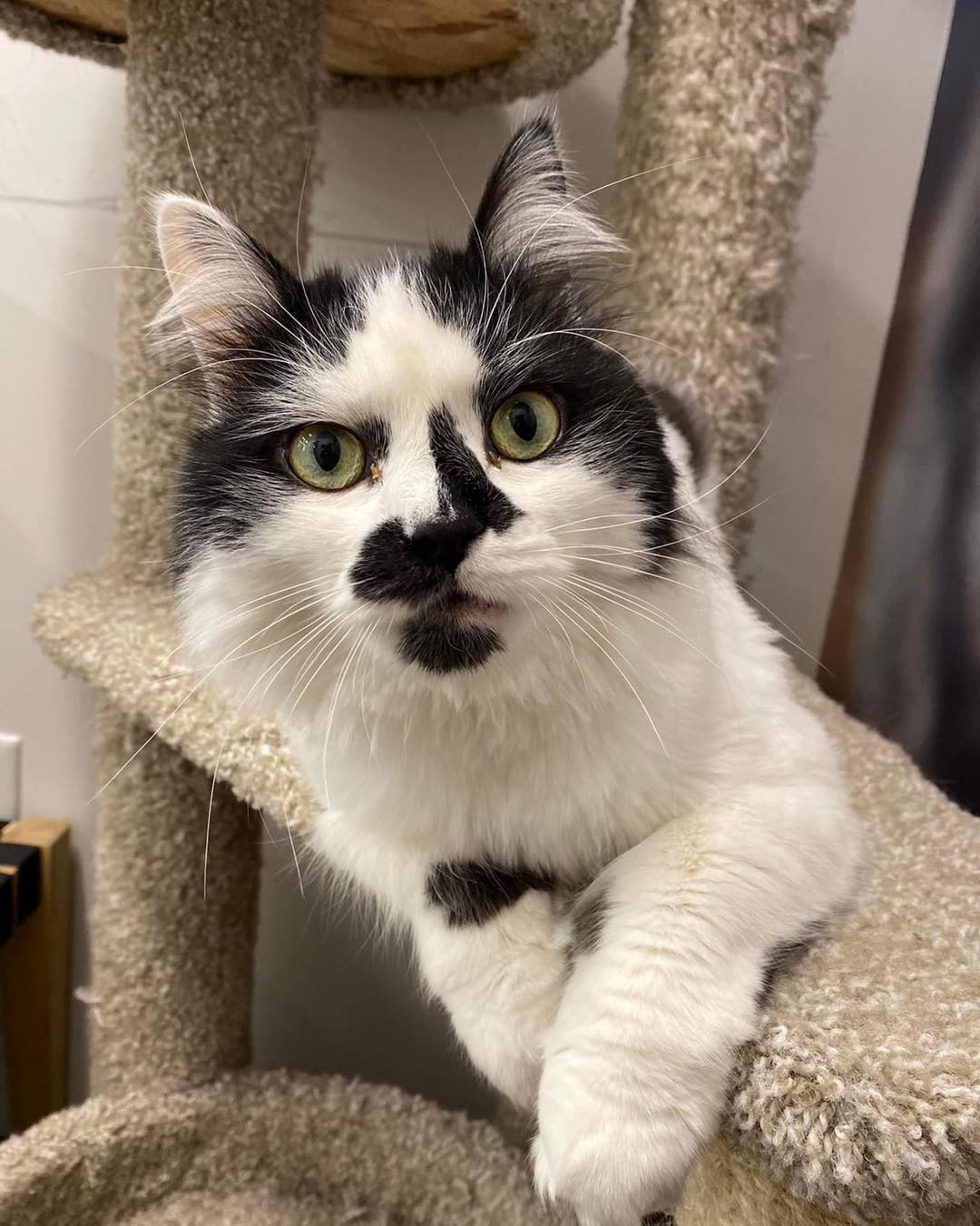 Tinker is a handsome 3-year-old boy. He, too, loves attention and will enjoy long, meaningful conversations with you. Tinker has long, beautiful fur that he enjoys getting brushed and is a sucker for cat treats!

Here’s Mia from Jellicle Cats, who’ll also be at the event. You can fill out an application for her here. 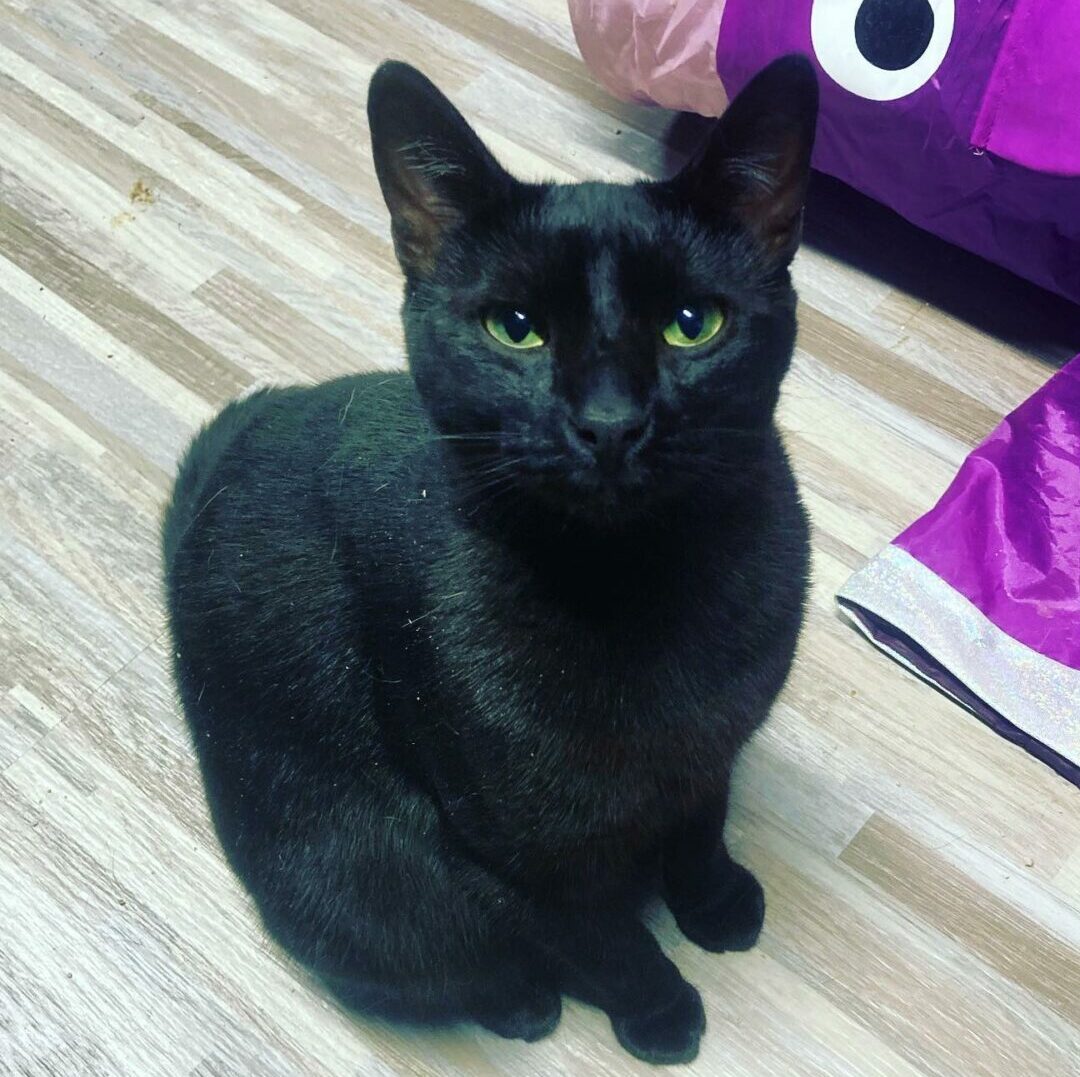 Jellicle Manor Matron Brandy has this to say about Mia: “We love this little weirdo so much! Mia is a young kitty, maybe a year and a half old, and she is The. Best. Cat. She was re-rescued from a family who took her in when they found her in a park and held on to her until they got busted by their landlord. They shared her story on social media. How could we say no? So, she became a Jellicle Cat. She craves attention, is inquisitive and playful, and adjusts fairly quickly to new kitties. She matches her play style to the kitty she’s playing with! And when our Nicodemus wants to steal the pouches of food or squeezy treats from the pantry shelf, Mia is like, OK, and will engage in petty larceny with him. She even likes the hounds of Jellicle Manor! She likes to sit on the Matron’s shoulders and groom her hair. You know she’s really happy when the drooling starts. Mia has a heart murmur, and the Matron had been reticent to put her up for adoption until she got the all-clear from the vet. And now, even though the Matron’s going to cry when it’s time to send her to her new family, Mia’s finally ready for a new life.

These dogs aren’t dachshunds or even mixes thereof, at least that anyone’s aware, but they do benefit from those wiener-dog events! Here are three who get wonderful board and care at the Seal Beach Animal Care Center, thanks to the funding, and are now ready to go home. Access the adoption application here. 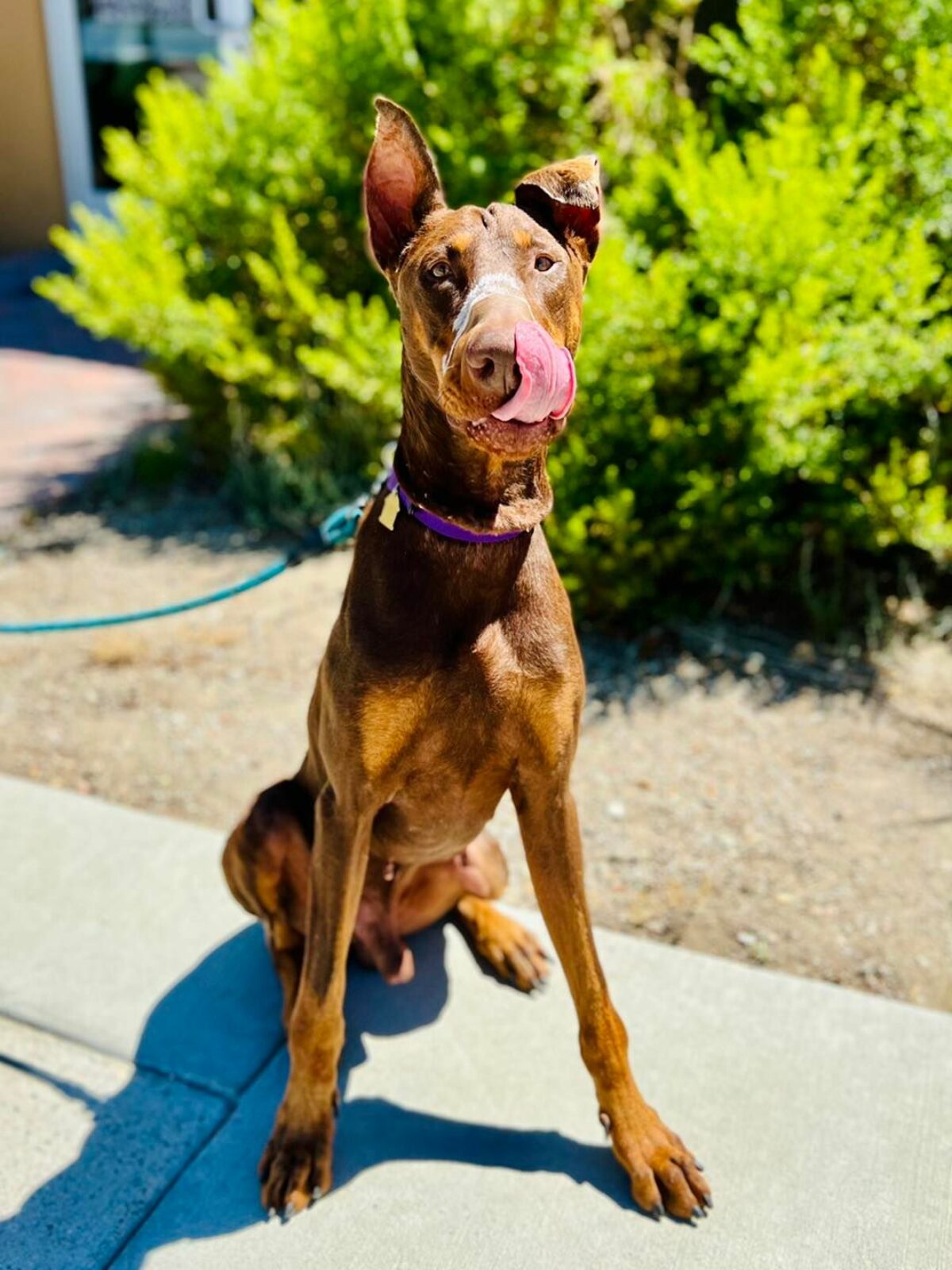 Meet Barney, a 3-year-old red Doberman who found his way to SBACC completely emaciated, with horrible skin. The worst part is that the volunteers suspected that his muzzle had been taped shut multiple times because of the white strip around his muzzle. He weighed a puny 40 pounds when he first got there, but he is now at 70 healthy pounds! 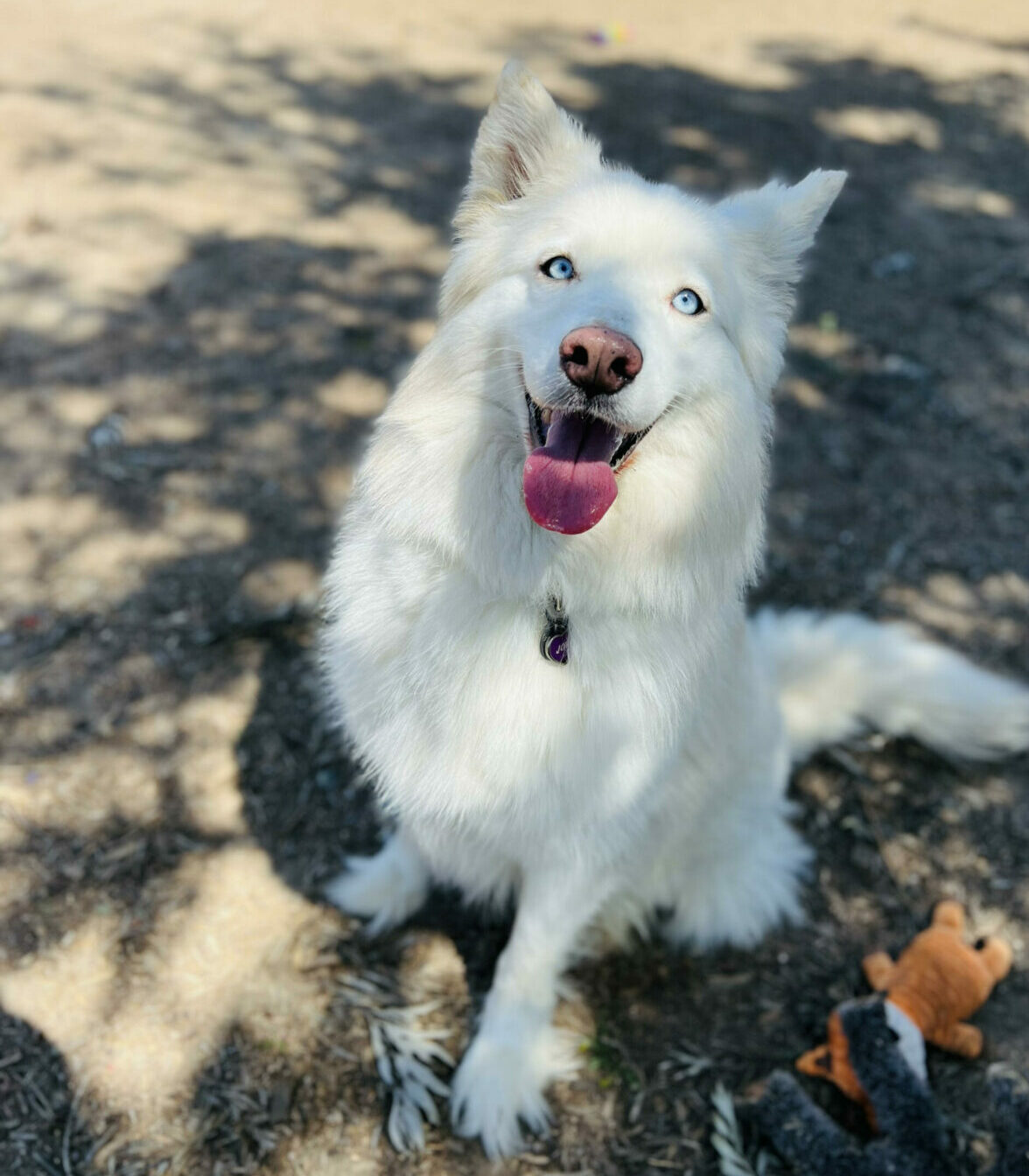 Paisley is a gorgeous, loving, playful 5-year-old girl. She’s shy when you first meet her, but she doesn’t take too long to come around. Paisley is fearful of men, so she’d would do best in a female-only home without small children. She loves belly rubs and playing with other dogs. A quiet home without too many new people to meet would make Paisley a very happy girl. 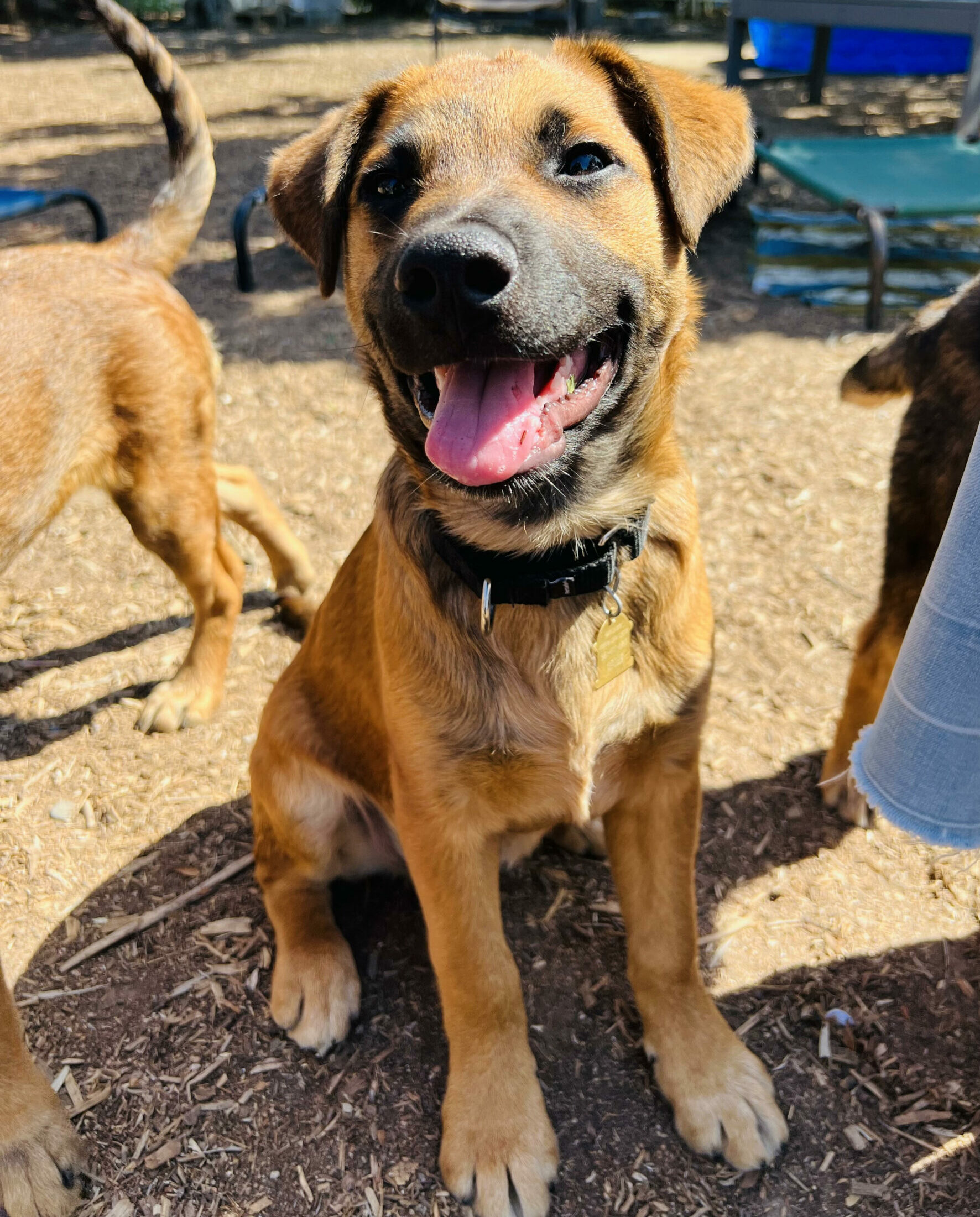 Ranger is a cutie-pie 4-month-old German shepherd-mix puppy! He is the most dramatic of the bunch and is learning to go with the flow! He loves exploring and playing with his siblings and mama Hazel. 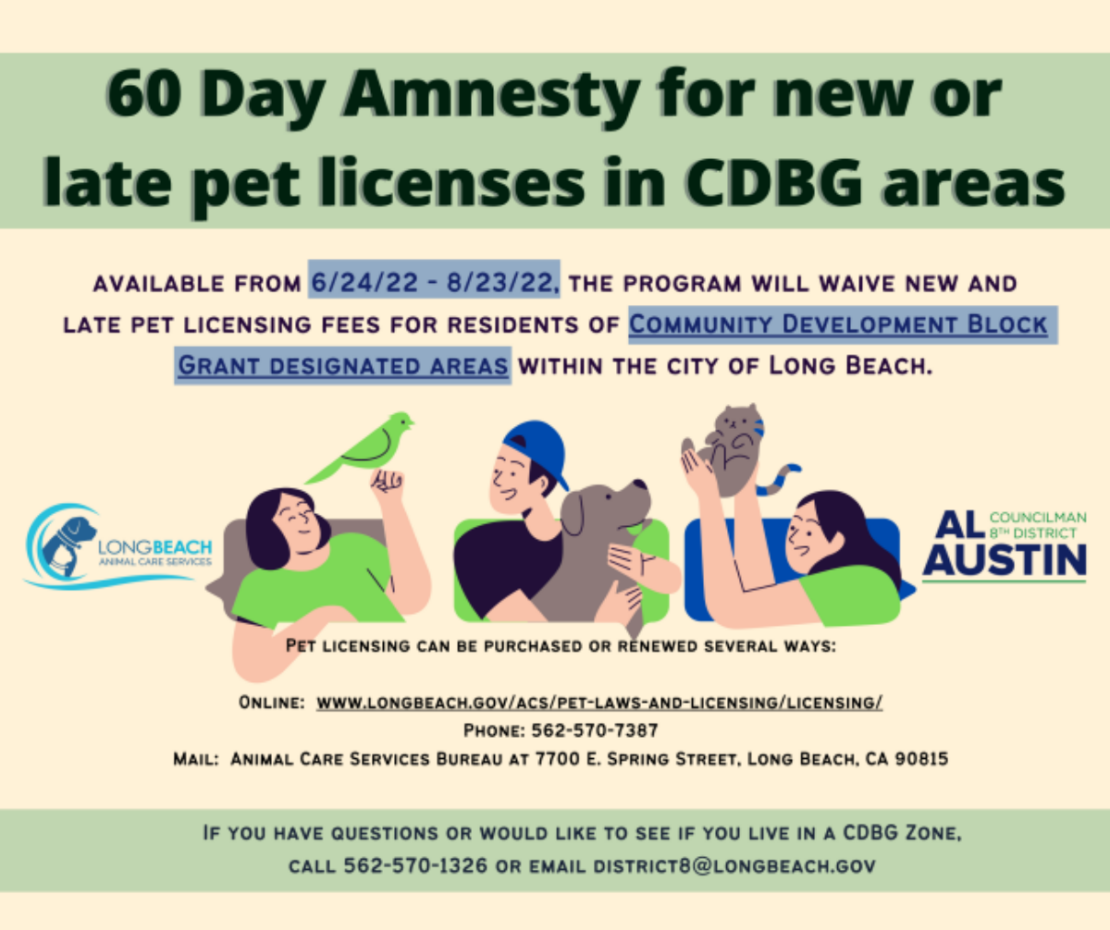 A resolution introduced by Councilman Al Austin and passed by the City Council provides a temporary amnesty program that waives a first-time pet licensing fee and late penalty fee for an expired pet license for residents of Community Development Block Grant-designated areas in Long Beach can apply to an HUD grant program that will waive fees for new and late pet licenses until Aug. 23. Access this map to determine whether you live in a CDBG zone, or call 562-570-1326 or email [email protected]. 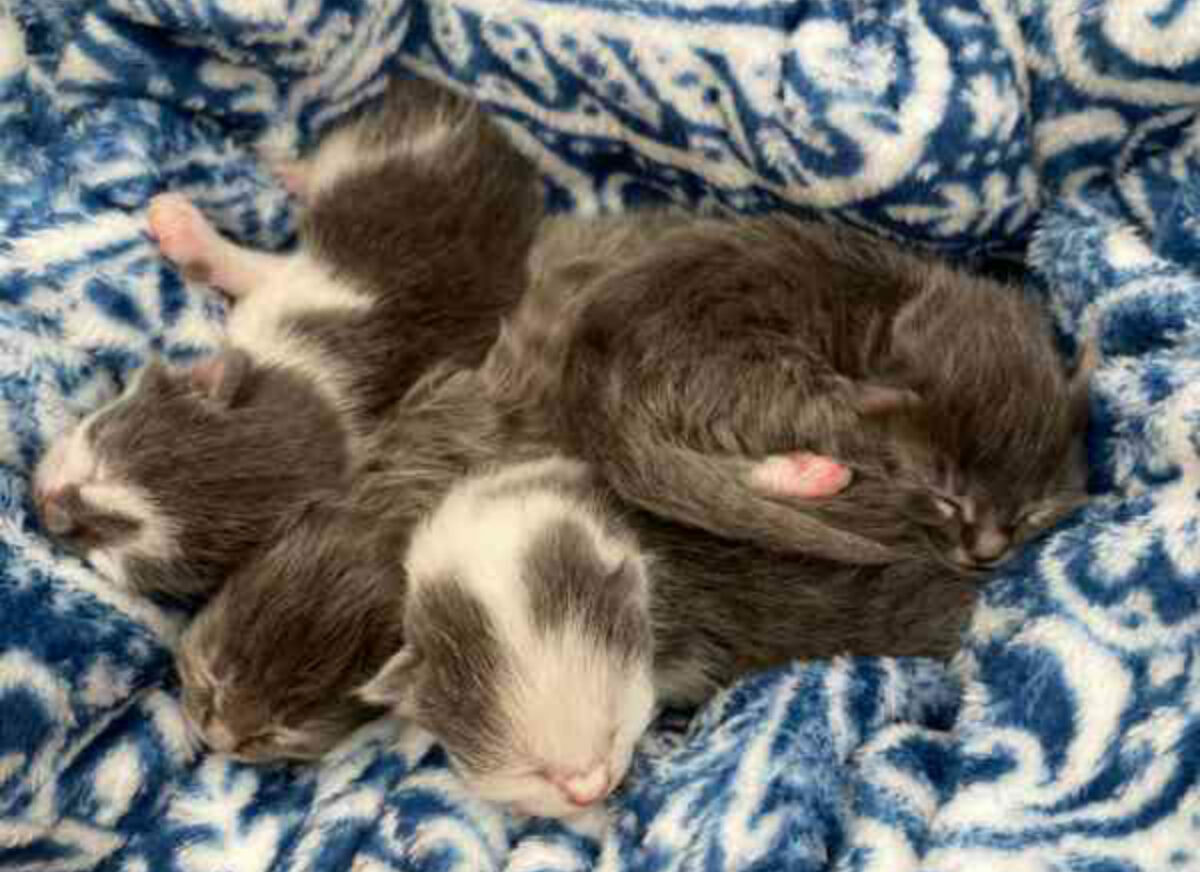