The American Civil Liberties Union and other groups are suing the U.S. government over conditions at the federal prison at Terminal Island, where more than half of the inmates have tested positive for the coronavirus.

The ACLU of Southern California, the Prison Law Office, and the law firm Bird Marella filed class-action lawsuits Friday in U.S. District Court in Los Angeles on behalf of people incarcerated at the Federal Correctional Institution, Terminal Island—and also at the federal corrections facility in Lompoc.

Both suits ask the court to direct the prisons to release people who have medical conditions that could lead to serious illness or death from COVID-19 infections. Exceptions would be individuals who pose serious flight risks or danger to others.

After a tour of the facility on May 12, Congresswoman Nanette Diaz Barragán said only six of Terminal Island’s about 1,040 inmates have received recommendations for such a release despite many of them being low-security and most of them needing long-term medical care.

For those who remain after court-ordered releases, the suits ask that the prisons provide adequate spacing for 6 feet or more of social distancing. It also asks that inmates receive, without charge, individual supplies of hand soap and paper towels, and access to hand sanitizer, daily showers, and daily clean laundry, plus other measures. 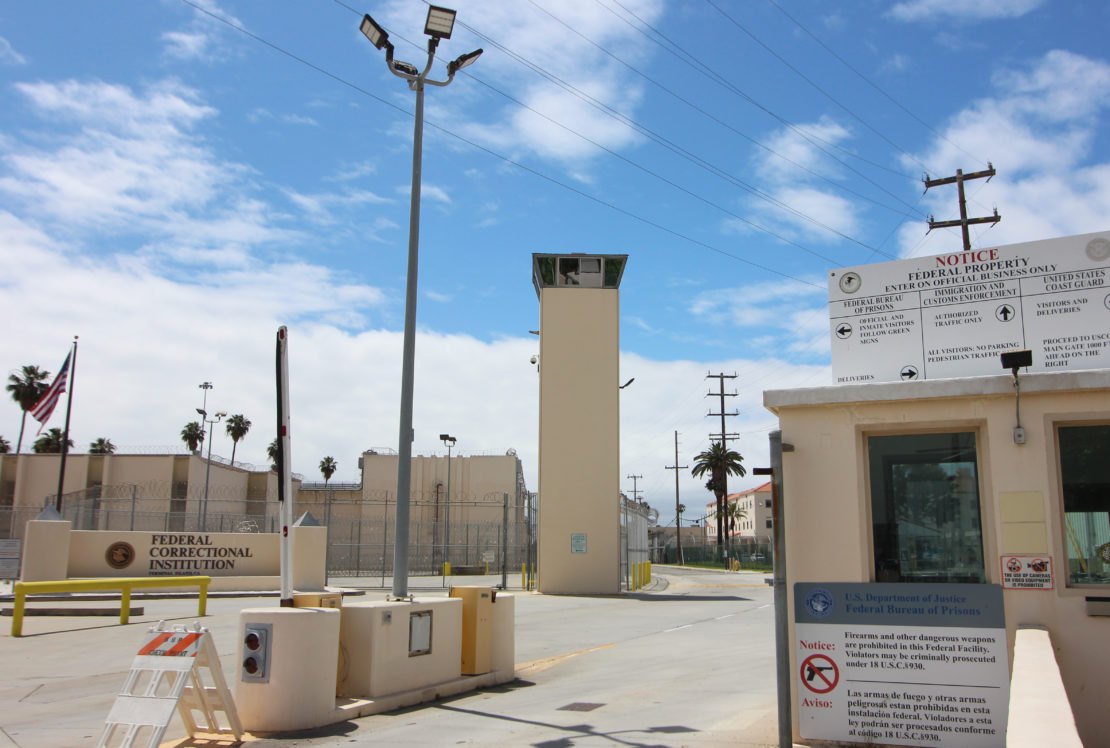 The federal prison on Terminal Island in San Pedro. Photo by Brandon Richardson.

The suits claim that conditions at the facilities constitute a violation of the Eighth Amendment of the U.S. Constitution that protects against cruel and unusual punishments.

More than 650 of Terminal Island’s inmates have tested positive for COVID-19. Eight have died from complication related to the virus.

“This crisis need never to have reached such horrific proportions. Through a series of unconscionable delays, blunders, and failures to follow official guidelines, the situation grew unimaginably worse,” the ACLU’s Los Angeles chapter said in a statement Sunday.

Family members of inmates and politicians have said prison officials made critical mistakes in slowing the virus’ spread, including not having guards wear masks at the beginning of the outbreak, according to Congressman Alan Lowenthal.

“And still, Terminal Island and Lompoc prison officials refuse to take adequate remedial actions, including those approved by the U.S. Congress and Attorney General’s office,” the ACLU’s said in its statement.

Attempts to reach officials at the Terminal Island facility were not immediately successful, but Federal Bureau of Prison officials have previously acknowledged the difficulties of social distancing in a prison.

The Bureau of Prisons has used a manufacturing facility at the prison as expanded housing, and has erected military tents to distance inmates from one another.

Los Angeles County health officials say all inmates in the facility are tested for COVID-19, and numbers released last week show that 552 inmates had recovered after testing positive.