COVID-19 has now killed 1,000 people in Long Beach, more than any other of the leading causes of death over the last 18 months, city data shows.

The city reached the milestone on Friday after the delta variant of the virus caused a third wave of infections and another spike in hospitalizations and deaths.

During the period of the pandemic from March 1, 2020, through Sept. 8, 2021, the second leading cause of death in the city was coronary heart disease, which killed 835 people.

In that same time, 282 people died of Alzheimer’s, 270 of stroke, 208 of chronic lower respiratory diseases and 201 of diabetes.

“It’s very sad,” said Mayor Robert Garcia, whose mother and stepfather died of the virus two weeks apart. “My mom was a health care worker and I want to do everything I can to make sure I support what she would want me doing in this moment—and that is protecting as many people as possible.”

Despite some peoples’ claims that COVID-19 is merely a “bad flu,” in Long Beach, it took only 72 days from the first reported case in the city for the virus to kill more residents than the last decade of flu seasons combined.

“You hear the news all the time about people dying from the coronavirus but I never thought it would happen to me,” said Hilbert Armijo, who lost his father and brother to the virus within four days of each other in February.

“That’s a lot of people passing from COVID,” Armijo said. “I feel bad for all the families.”

The city announced its first death on March 23, 2020, a woman in her 50s with underlying health conditions. Deaths began to gradually rise in the summer of July 2020, during the first wave cases.

In January, more than a dozen people were dying daily, with a high of 27 people on Jan. 20. The virus waned after more vaccinations gradually became available to the public, but the virus spiked again this summer after the rise in a new variant.

On March 11, 2020, the then-new virus was declared a global pandemic and governments around the world, including the U.S., enacted economic shutdowns with the hopes of slowing the spread of virus. Businesses were shuttered and most people were relegated to their homes as the deaths began to tick upward.

An estimated 4.67 million people have died of COVID-19 around the world. 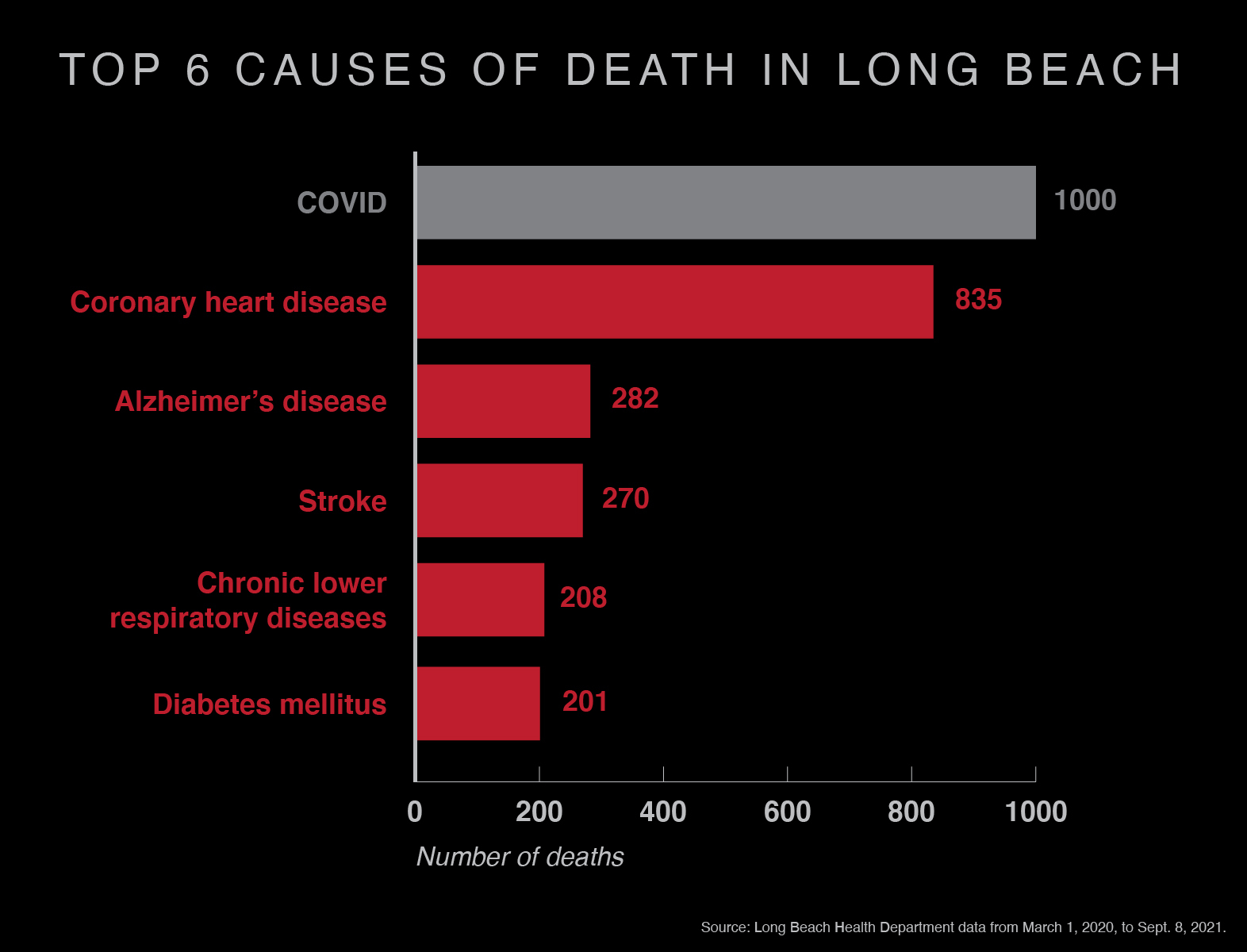 “This is the single largest loss of life over any incident or event that our city has had in our history,” Garcia said. “It’s really hard and very traumatic for a lot of people.”

Before COVID-19, the single greatest loss of life due to a mass-casualty event was the 1933 Long Beach earthquake, which killed 120 people, including 52 Long Beach residents. At 5:54 p.m. on March 10, 1933, a magnitude 6.4 earthquake centered 3 miles south of Huntington Beach shook Southern California.

Within seconds, 120 schools in the Long Beach area were damaged and 70 were destroyed, according to the California Department of Conservation. Had the quake been earlier in the day during school hours, experts said casualties would have been in the thousands.

There is no memorial dedicated to those who died during the earthquake but city officials have already announced one for those lost to COVID-19. As part of the city’s recently approved 2022 budget, $100,000 has been allocated to the visioning plan for the coronavirus memorial.

The visioning process is expected to take six to 12 months and will determine the memorial’s location, type and appearance. Garcia has previously said he envisions a solemn public space, likely outdoors, where people can go to remember their loved ones as well as frontline workers who cared for them and others amid the pandemic. Decisions, however, will be made by a committee with public input.

Armijo said he is looking forward to the memorial even though he has come to terms with his losses.

“I’m doing good. I’ve got a lot of peace in my life,” Armijo said. “My father lived a good life. My brother, it was sad to see him go but I just thank God that they are both together in Heaven. I just know they’re in a better place now—that’s where I get my peace from.”

While 1,000 deaths is devastating, Garcia said that unfortunately deaths will continue to rise. The city’s coronavirus metrics, including its seven-day positivity rate and daily cases per 100,000 residents, have been trending downward in recent weeks, but 54 Long Beach residents remain hospitalized—93% of whom are unvaccinated, according to the health department.

“With each death, many family members and friends have suffered and grieved. It has been devastating,” health department Director Kelly Colopy said in an email, noting that unvaccinated and partially vaccinated people are 7.1 times more likely to be hospitalized by COVID-19. “The losses suffered in recent months are particularly devastating because most of these deaths could have been prevented.”

In Long Beach, 76.2% of eligible residents ages 12 and up have received at least one dose of a coronavirus vaccine and 66.6%, or 302,809 people, have been fully inoculated against the virus. Garcia said he is glad to see vaccination numbers continue to slowly tick upward but that more residents need to step up.

“It’s difficult to understand why some folks are willing to put their lives or others’ lives at risk,” said Garcia, who has been a staunch advocate for people to get the vaccine. “We have the ability to stop these deaths—it’s whether or not people choose to value human life over their perception of what they believe is their individual freedom.”

Editor’s note: This story has been updated to more precisely reflect the unvaccinated hospitalization rate in the city.