Was the young man a violent extremist hellbent on revenge for a mass shooting of Muslims in New Zealand or a “lost soul” who was abandoned by a drug-addicted mother before undercover FBI operatives stoked his anger into violence?

That’s the central question jurors are being asked to answer in the trial of Mark Steven Domingo, the 28-year-old Reseda man accused of trying to kill as many people as possible by planting bombs at a rally in Long Beach’s Bluff Park.

Domingo is charged with providing material support to terrorists and attempting to use a weapon of mass destruction when he targeted an April 2019 rally in Long Beach where hundreds of protesters showed up to counter a planned White-nationalist rally that never materialized.

Domingo didn’t care whom he killed, he just wanted “more bodies,” he told FBI agents after his arrest. Plus, he explained, setting off explosions during a clash between far-right and far-left activists could create more chaos.

They were filled with nails, “long nails just like this that the defendant purchased on his own to use as shrapnel in the bombs he intended to use,” Assistant U.S. Attorney Reema M. El-Amamy said, holding up a silver spike several inches long.

The bombs, though, never had a chance of going off.

The explosives were inert, assembled by an undercover FBI agent posing as a bomb maker whom Domingo found through a paid informant who was also working for the FBI.

Those interactions, and whether Domingo was predisposed to plant the bombs without the FBI’s involvement, are now central to the entrapment defense being raised by his defense attorneys, who say the government operatives fanned the flames of an angry young man’s rage before arresting him. 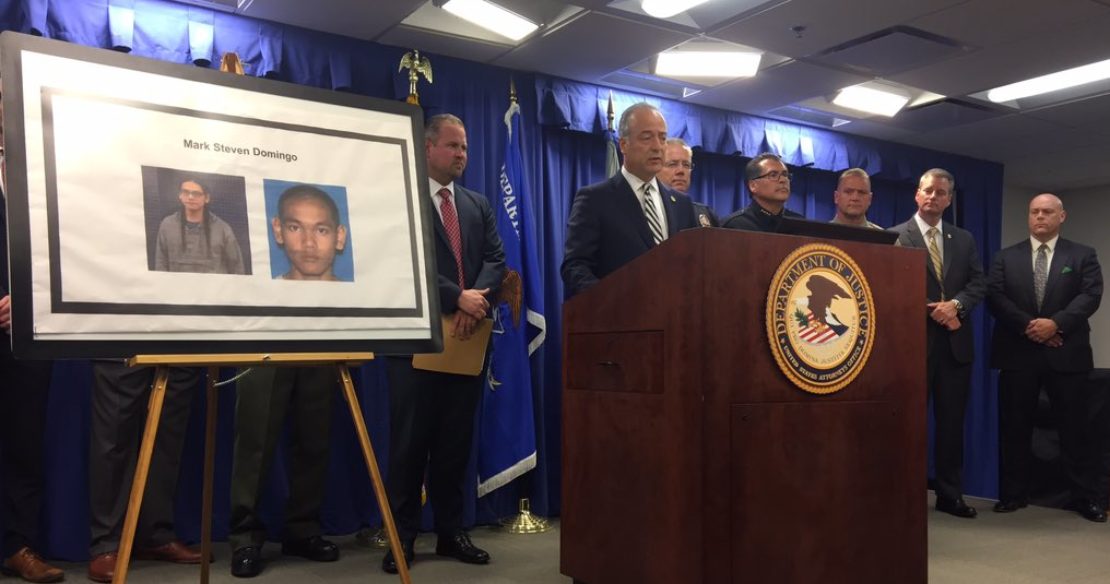 Federal authorities gathered for a press conference in Downtown Los Angeles after announcing the arrest of Mark Domingo in April 2019. Photo by Kelly Puente.

In her opening statement, defense attorney Lisa S. LaBarre told jurors that Domingo’s father died of cancer when he was 5 years old, and his mother abandoned him to be raised by his grandmother, who resented the responsibility.

As a teenager, she said, Domingo found his mother’s diary, where she’d written about his younger brother—not Domingo—being her reason to live.

Imagine, LaBarre said, “She’s rejected you and even put it in writing.”

So, Domingo joined the U.S. Army in hopes of finding some kind of family, according to LaBarre.

In interviews with FBI agents after his arrest, Domingo described his motivations differently. He said he’d joined the military to “slaughter” Muslims, thinking it would be like a video game. Instead, he said, fighting in Afghanistan was a lot of boredom, chores and “getting shot at and not being allowed to shoot back.”

The Army soon kicked out Domingo when his fellow soldiers found their names written on his rifle’s bullets and grenades used at their base.

“Domingo wrote our names, the entire platoons’ names on ammo and put them in his magazine in his kit,” said Dallas Richardson, a soldier who served with Domingo. “Those are our names on his bullets. That’s a threat.”

After failing to find any kind of brotherhood in the Army, Domingo turned to the religion he’d once despised, according to LaBarre.

“He’s a young man who doesn’t belong anywhere until he finds Islam,” she said.

After converting to the faith in 2019, Domingo came onto the FBI’s radar in a private chatroom that an undercover agent had infiltrated. There, about 50 members discussed their support for the violent extremism of the Islamic State, according to the agent, who testified under the alias Jennifer West.

When agents later seized Domingo’s computer after his arrest, it was full of violent imagery and ISIS propaganda including beheadings and other pictures and videos glorifying extremism, according to the FBI’s account.

In March 2019, Domingo was especially upset about the Christchurch mass shooting where 51 Muslims were killed at two Mosques in New Zealand.

“They shed our blood. No Muslim should have to experience this. A message needs to be sent,” Domingo wrote in the chatroom, according to prosecutors.

There needed to be revenge, he allegedly said. “I agree with you,” said the undercover FBI agent who began communicating with him in private messages.

In LaBarre’s telling, that agent then began “stirring up anger and resentment on behalf of the U.S. government.” From the witness stand, West said she had to appear sympathetic as to not blow her cover, and she repeatedly tried to slow down Domingo, who talked about going on a shooting spree the next day.

Soon, the paid FBI informant befriended Domingo. “They became very, very close,” LaBarre said of them eating and praying together while envisioning the best ways to kill as many people as possible.

“An [improvised explosive device] here on the freeway, that would do damage,” Domingo allegedly said during one meeting with the informant, imagining hundreds if not thousands of people dead.

On April 23, 2019, the informant connected Domingo with the undercover FBI agent posing as the bomb-maker. Days later, they drove to Bluff Park, where they planned to plant the bombs. On the way, prosecutors allege, Domingo pointed out other targets they could hit if their attack was a success and they escaped: the port maybe, or a nearby railroad.

Online, prosecutors alleged, Domingo dreamed of perpetrating a crime like the Las Vegas mass shooting that killed 59 people in 2017.

“Something to kick off civil unrest,” he allegedly wrote. “[. . .]and its not about winning the civil war its about weakening America giving them a taste of the terror they gladly spread all over the world.”

As the trial began Thursday afternoon, Judge Stephen V. Wilson repeatedly chastised the lawyers for being too quick to inject their opinion about Domingo’s state of mind and whether the FBI encouraged him to seek out the pressure-cooker bombs or whether it was his idea. That will be a key distinction in determining whether he’s guilty of attempting to use a weapon of mass destruction or whether the FBI entrapped him in that charge.

But, “that’s argument,” Wilson told the attorneys. “This is opening statement.”

For now, stick to the evidence, he reminded them, because it will be up to a jury to decide whether the FBI encouraged Domingo to carry out the plot or whether he was predisposed to the act of violence.