Long Beach nurses are being poached away with pay as high as $2,500 per shift by other hospitals, with local officials scrambling to keep staff by offering signing bonuses and other perks.

This all comes amid a nationwide nurse shortage as coronavirus surges push some health systems to the limit.

California has suffered from a nursing shortage for decades, which has only been exacerbated by the pandemic, and the poaching attempts from other cities and states have forced Long Beach facilities to offer incentives such as a per-shift bonus simply for showing up to work.

“Because we don’t have frontline nurses, we don’t have beds staffed,” Gwen Ocampo, chief clinical officer at Community Hospital Long Beach, said. “Patients are being held in the ER, waiting for a bed in the intensive care unit or medical-surgical unit or the telemetry unit.”

At any given time, Community Hospital, which reopened in January when COVID-19 cases were surging, is operating with anywhere between 30% to 60% supplemental nurses (freelance nurses who are sent by agencies upon request), Ocampo said. However, many agencies have new contracts requiring high wages as coronavirus surges continue in some areas of the state and across the country, Ocampo said.

Nurses are being paid premiums to work in areas where the virus is surging the worst, including Texas and Florida, Dr. Tom Sugarman, an emergency physician in the East Bay and senior director of government affairs for the physician’s group Vituity, told CalMatters. Along with most Southern states, Texas and Florida are experiencing severe surges in new cases and deaths, according to CDC data.

The Southern states’ seven-day new case rate per 100,000 residents range from about 370 to 725. California’s rate, meanwhile, is 133.4 as of Monday. However, due to the state’s large population, California has the second highest number of positions posted for nurses, exceeded only by Texas, Aya Healthcare Vice President of Account Management Sophia Morris told CalMatters. 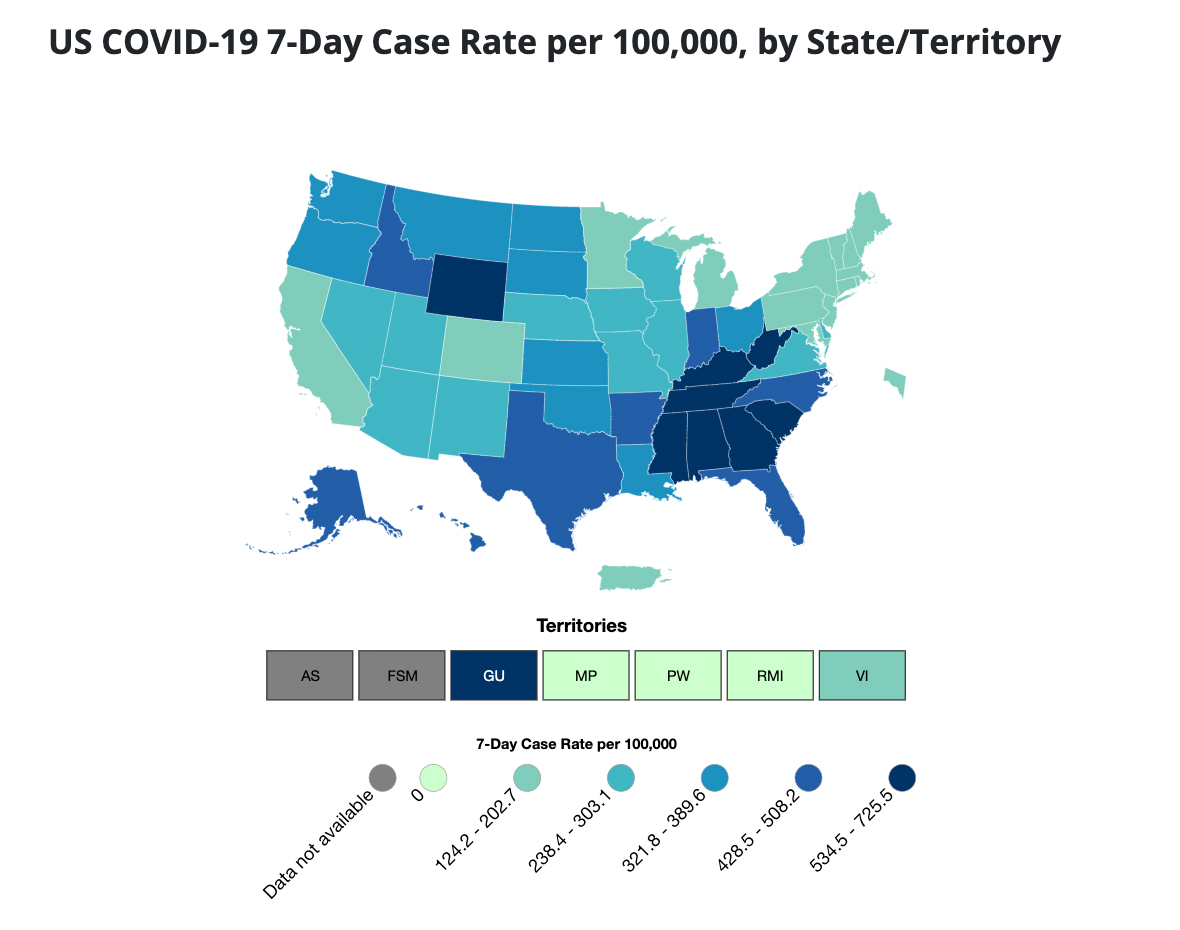 Map courtesy of the CDC.

Aya is only able to fill about 3,000 positions per week, despite around 50,000 temporary health care jobs being posted nationwide, Morris said.

To lure nurses to the state, the California Health Department of Public Health last year agreed to pay up to $145 per hour for Aya intensive care unit nurses and more if the facility has a critical need through a $1 billion contract. At Community Hospital, Ocampo’s nurses have received offers of $2,500 per shift to work in San Diego, which could easily net them $10,000 or more per week, she said.

“It’s just craziness,” Ocampo said. “Local nurses are being pulled out of their community. They will call off a shift they are scheduled for to go work for higher pay.”

Community Hospital recently put in place a program that includes a per-shift bonus to incentivize nurses to show up to their shifts, Ocampo said. Additionally, the hospital is offering signing bonuses, referral bonuses and retention bonuses, she added.

Ocampo declined to give the dollar amounts for these incentives.

St. Mary Medical Center and Long Beach Memorial officials confirmed they are also offering incentives such as signing, referral and shift bonuses, but declined to offer details about what those bonuses are or how many supplemental staff have been brought on.

Officials said they have sufficient staffing to meet demand.

Nurse recruitment and retention is critical as patient volumes have increased dramatically over the last few months, Ocampo said, noting a 30% increase at her hospital. Scripps Health, which has five hospitals and 28 outpatient clinics in the San Diego area, told CalMatters it is serving nearly 20% more patients than prior to the pandemic.

“Like hospitals across the country, patient volumes have increased,” Tony Garcia, chief nursing officer at Memorial, said in an email, noting the delta variant is a factor in the strain on staffing resources. “In addition to an increase in unvaccinated COVID patients, we are seeing a higher volume of patients with other conditions than we normally do this time of year.”

At St. Mary, patient volumes increased 5% during July and August, according to Gloria Carter, vice president and chief nursing officer at the hospital.

For staff who have worked throughout the pandemic, Ocampo said burnout is imminent if coronavirus hospitalizations remain elevated across the country, which would further worsen shortages. In Los Angeles County and Long Beach, at least, hospitalizations have begun to decrease following a spike that began after the June 15 reopening.