A woman has filed a legal claim against the Long Beach Police Department alleging that she lost a portion of her finger when officers fired “less-lethal” rounds into a crowd on May 31.

As demonstrations unfolded across the country, more than 3,000 people marched in Downtown Long Beach on May 31 to protest police brutality and the death of George Floyd at the hands of a Minneapolis police officer.

While the march was mostly peaceful, the evening descended into chaos as looters and vandals fanned across the city, prompting officials to call in the National Guard for help.

Long Beach officers were seen firing less-lethal projectiles to disperse crowds on Pine Avenue and Ocean Boulevard. In one case, KPCC radio journalist Adolfo Guzman-Lopez was hospitalized after he was hit in the neck.

Marisa Baltazar, in a claim filed Monday with the city, said she was attending the peaceful protest at the intersection of Broadway and Pine Avenue around 7:30 p.m. when an officer’s projectile hit her hand as she was filming with her cell phone.

Baltazar said she was hospitalized and lost a portion of her finger from the severe injuries. Her attorney, Salomon Zavala, could not immediately be reached for comment Thursday. 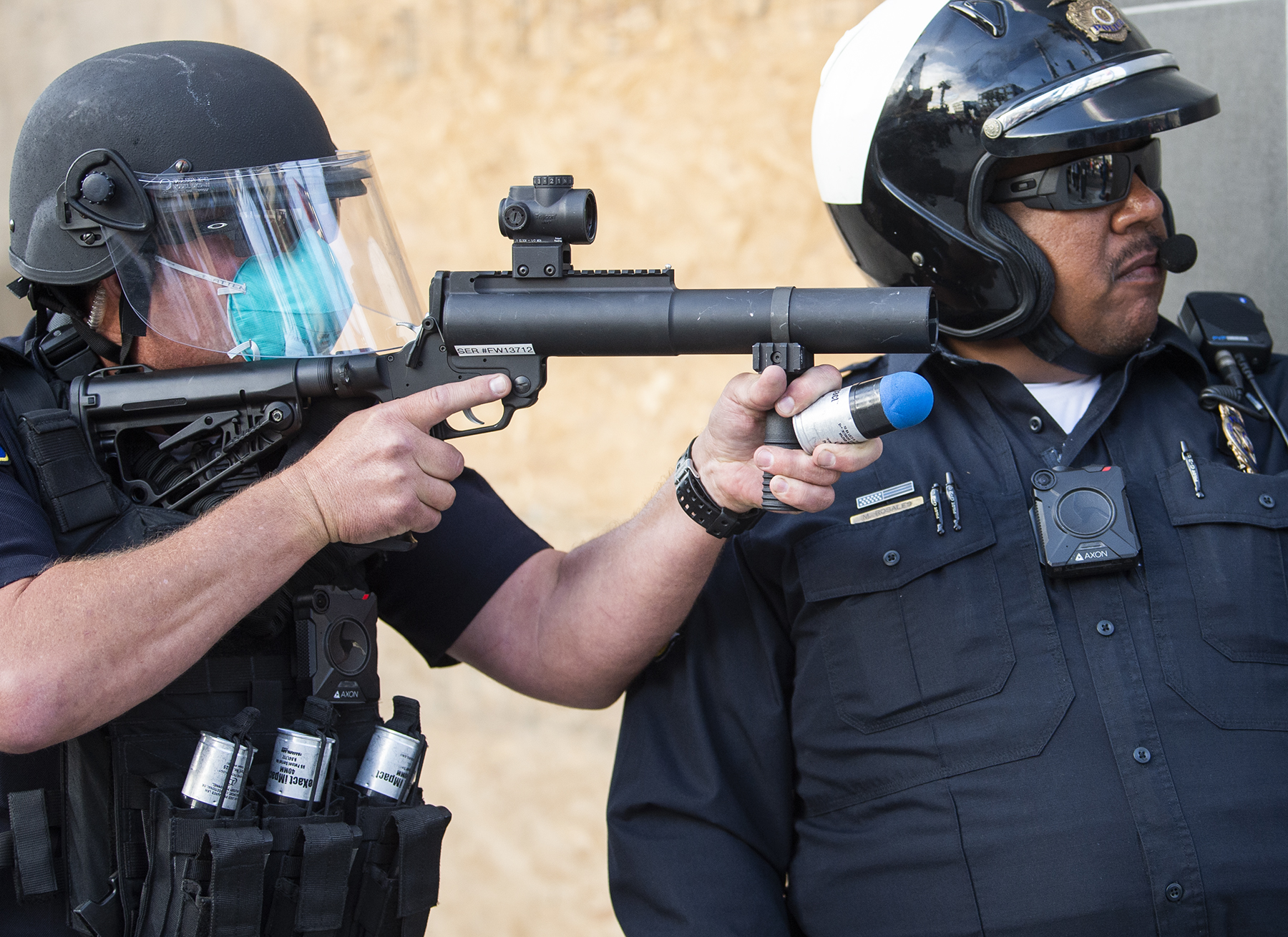 A Long Beach police officer trains his less-lethal weapon at the crowd at Pine Avenue and Broadway during a protest, Sunday, May 31, 2020. Photo by Thomas R. Cordova.

A claim is a required legal precursor to a lawsuit. Baltazar is seeking damages in excess of $10,000 for her injures, but the figure would likely be much higher if she files a lawsuit.

The Long Beach Police Department declined comment Thursday due to the pending litigation.

The department’s less-lethal ammunition includes 40-millimeter foam projectiles that can be fired from marked 12-gauge shotguns and specially designed launchers.

When using less-lethal ammunition, officers are instructed to aim for the arms below the elbow, stomach and legs.

Police Chief Robert Luna told the City Council this month that officers used foam projectiles against some agitators in crowds on May 31 after they were attacked with “rocks, bottles and M100s.”

“Those launchers are target-specific––at only individuals who are attacking the officers,” he said.

Baltazar’s legal claim is one of two filed against the city recently in the fallout from the protests and looting.

Also on Monday, Shoe Palace Corporation filed a claim against the city seeking $643,082 in damages.

The company alleges that its store on Long Beach Boulevard in North Long Beach was looted and vandalized after the city failed to provide the necessary “safeguards and protection that businesses fundamentally rely on.”

The city has faced criticism from angry business owners who have said the police department was unprepared for the mass unrest on March 31.

The chief, speaking before the City Council, has praised his officers’ response but  acknowledged the department did not adequately stop widespread damage during that first night of protests.