You in the market for a 1930s-era, 6-ton lifeboat coated in lead paint?

If you’re interested in acquiring a piece of maritime history, you could have a chance to buy one or all of the Queen Mary’s lifeboats.

The city of Long Beach is seeking bids now through March 25 from qualified museums, preservation groups and developers who would like to buy and preserve 20 of the ship’s lifeboats.

City officials said there’s no minimum bid, but bidders must have experience in preserving historic relics and describe in detail their plans for the boats and how they would preserve them. Any winners will need their own transportation to cart the roughly 36-foot-long vessels off the Queen Mary parking lot.

Interested organizations can visit PlanetBids to submit a proposal for consideration through the city’s request for qualification vendor portal. Prospective buyers will be able to tour the boats on March 4.

Lifeboats are taken off the Queen Mary with help from a crane in Long Beach Wednesday, Feb.16, 2022. Photo by Thomas R. Cordova

The city this month removed 20 of the Queen Mary’s 22 badly corroded lifeboats as part of several critical repair projects for the iconic ocean liner. The Queen Mary remains closed while the repairs are underway, but it will hopefully reopen later this year.

The lifeboats were a top safety priority because of their deteriorated condition and potential damage to the vessel’s structural integrity. Two boats will remain on the ship for restoration.

Completed in Clydebank, Scotland, in 1936, the Queen Mary originally had two smaller rescue boats and 22 lifeboats, which could fit as many as 145 passengers. The lifeboats span roughly 36 feet in length and weigh around 12,000 pounds since they’re constructed with steel and wood, according to a city report.

A recent assessment from architectural consulting firm Wiss, Janney, Elstner Associates found that 15 of the boats are original to the Queen Mary, while the others are similar in shape and size and may have come from other ocean liners.

The report said the boats are in poor condition with “localized portions of the steel framing severely corroded and no longer intact.” They also have lead-based paint in the black trim and interior red paint, so any interested organization would need to sign a liability release, the report noted. 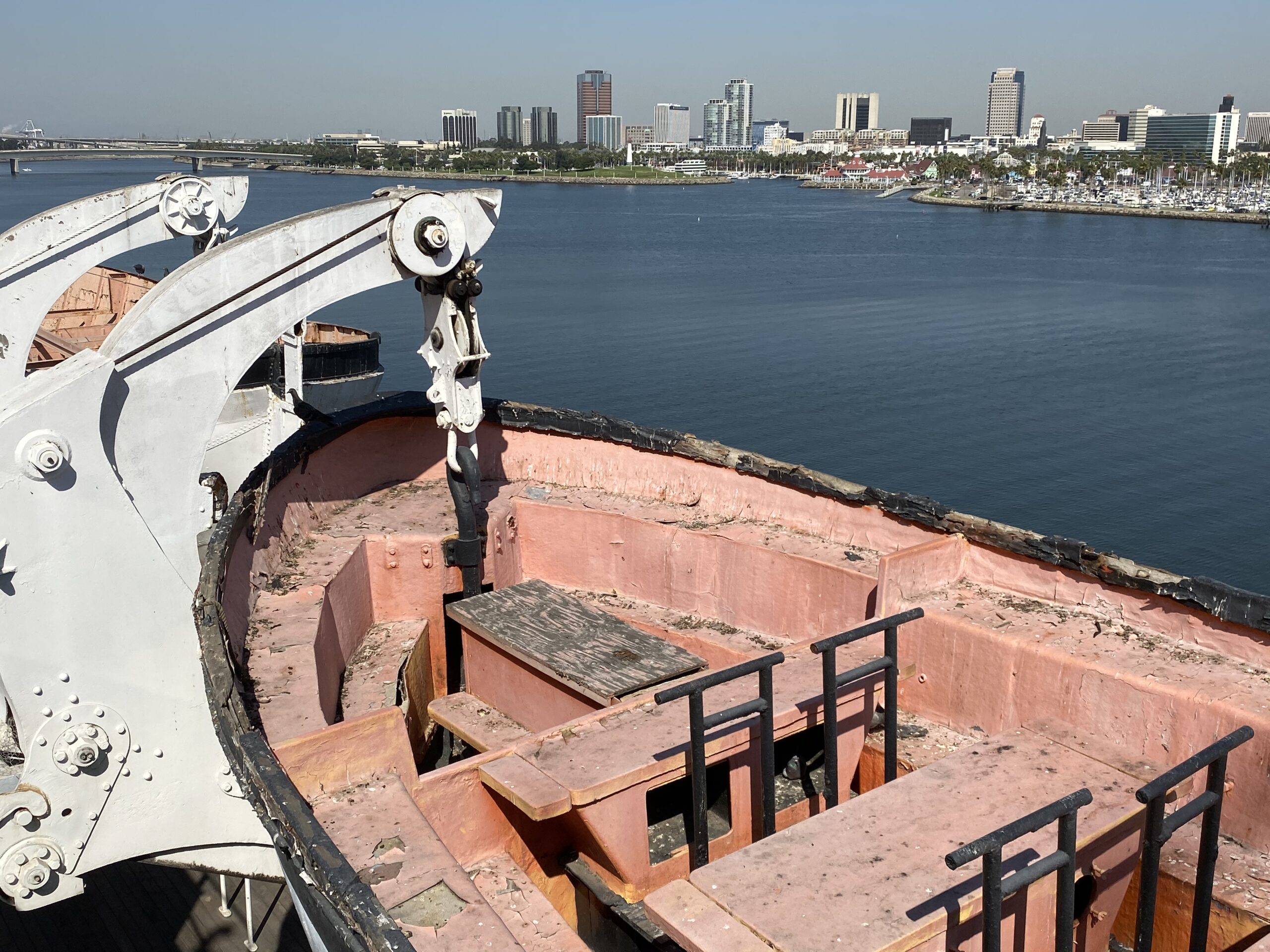 One of 22 corroded lifeboats suspended on the Queen Mary in 2019. Photo by Kelly Puente

The boats were repainted their iconic white, black and red colors and stripped of their engines and gear when they arrived with the Queen Mary to Long Beach in 1967.

The city is also planning to install new bilge pumps on the ship to discharge water and prevent flooding as part of city-funded critical repairs that will cost $5 million. Future repairs will also include stabilizing bulkheads, installing an emergency generator and improving the water intrusion warning system.

The first $2.5 million in repairs came from Tidelands Funds in the Fiscal Year 2022 budget, while the City Council will consider an additional funding request later this year. 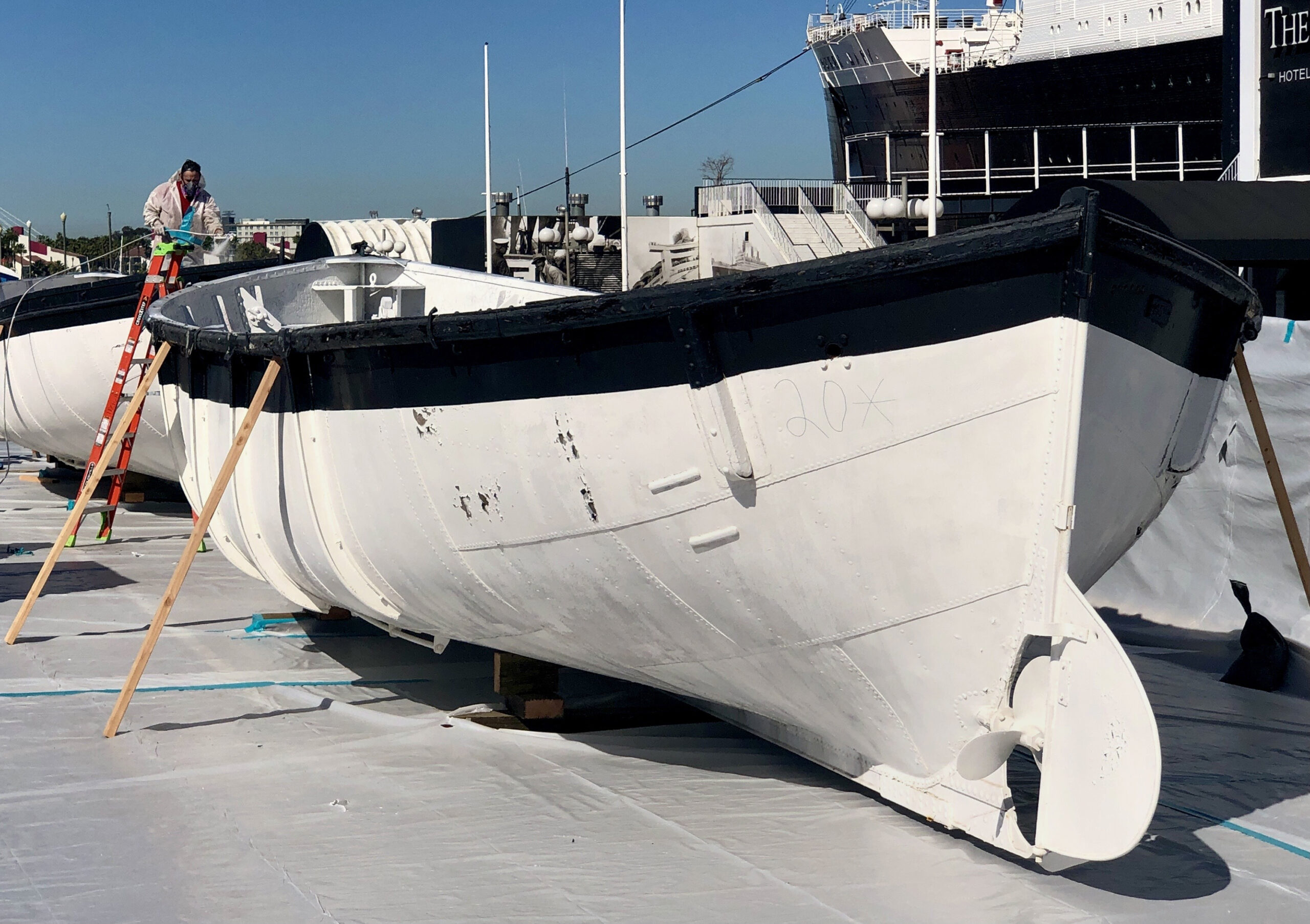 A man wearing a full body suit and mask cleans the interior of a Queen Mary life boat in the parking lot beside the historic ship. Friday, Feb. 11, 2022. Photo by Brandon Richardson.