The Bay Shore Library—a mid-century modern source of pride in Belmont Shore—has seen better days. With a dilapidated exterior, including rotten wood and leaky, sunburnt windows, residents and visitors alike have been vocal about the library needing a facelift.

However, after being allotted $800,000 by the city’s Public Works Department, many are concerned that the updated facade improvement eradicates the soul of the original design.

Originally designed by local architects Palmer, Power, and Daniels and built in 1959 at a cost of $120,000, the Bay Shore Library immediately became one of the city’s prime examples of modern architecture during the period: Clean lines, plenty of wood and glass paired with intricate tiling mosaics, it has long been considered a gem among city buildings. 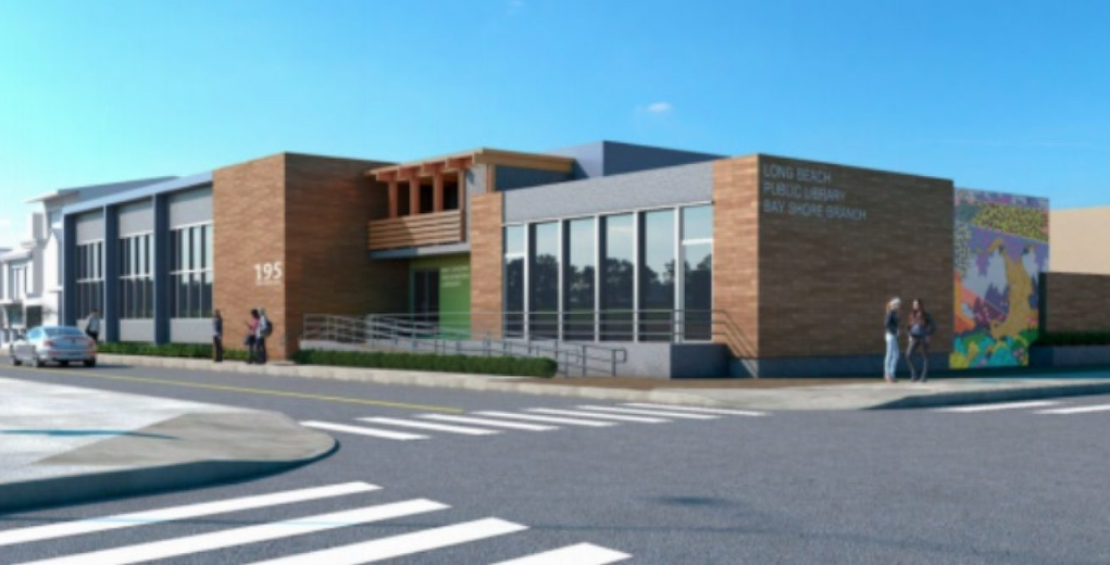 The proposed renovation of the Bay Shore Public Library in Belmont Shore. Courtesy of the City of Long Beach.

“As an architect, it is my professional opinion that it is an excellent example of the mid-century modern style worthy of landmark status,” said Michael Bohn, principal at Studio One Eleven. “This public structure reflects many rich details—all original—such as the entry trellis, vertical siding, railings, signage, boat graphic, and expansive glazing fronting the bay.”

The proposed rendering of the renovation is more than a “facade improvement” but rather an overall re-haul of the building’s exterior, replacing wood with brickwork, upgrading the windows and their framings and removing the entirety of the front patio as well as the trees that line the patio. It has been met with less than universal acclaim.

“The building definitely needs to be refurbished and the appropriate approach would be a sensitive restoration—not a new facade as currently proposed,” Bohn said. “I believe the cost of a careful restoration would be similar or even potentially less than the suggested new design.” 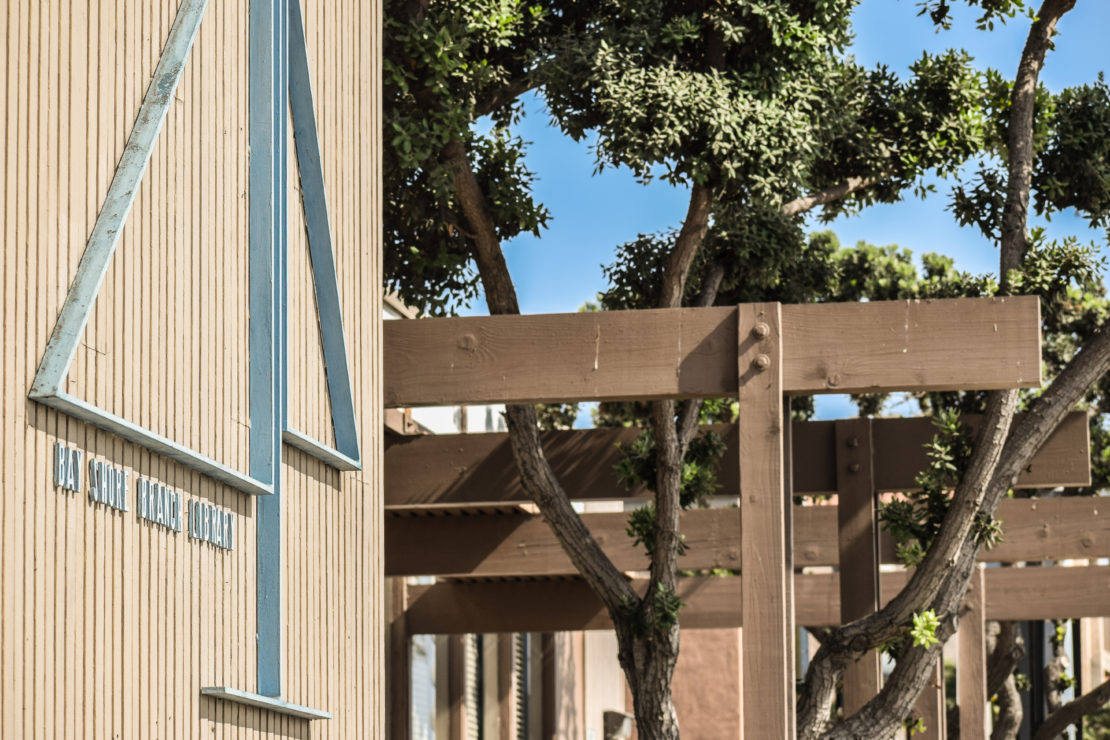 The Bay Shore Public Library in Belmont Shore as seen on Sept. 23, 2020. Photo by Brian Addison.

Bohn echoes others in the community, including architect Jon Glasgow of Interstices and Sarah Locke, who formerly headed up Long Beach Heritage, in saying that this proposal seemed to come out of nowhere.

“When I was still at Heritage, we were anonymously handed the rendering and were rather surprised at how much the alterations take away from the integrity of the building,” Locke said. “There’s a way to do these things that both benefits the community and maintains the integrity of the original design.”

Councilmember Suzie Price of District 3, who said she has been spearheading the project for four years, has been clear that multiple community meetings have been held and the renderings have been anything but secretive.

“About two years ago, I received notice from Public Works that we were allotted money to do a facade improvement for Bay Shore,” Price said. “I asked Public Works to work with a local architect [Los Cerritos-based firm Architects MSP] to draw up designs that we can take a look at. We then held a meeting at Station 14 to highlight that design; then about a year following, I held presentations with multiple community organizations, including Friends of Belmont Shore and Friends of the Peninsula. I shared the rendering at every meeting.”

The Bay Shore Library in Belmont Shore as seen on Jan. 12, 1960, shortly after its formal opening. Courtesy of the Long Beach Public Library.

According to Price, her approach to the facade improvement was to ultimately update it, make it “more of a showpiece” as the entrance to Second Street, and “refresh the building.”

“That’s what I was focused on: refreshing the building—not some type of historical preservation project,” Price said. “So they came back with what we asked for: new windows, some facade components that tie nicely into the center medians on Second Street. Everything was designed to fit in with the current streetscape.”

But the biggest question those concerned had was why wasn’t a restoration of the original design even put on the table, especially after Public Works put an architectural firm on retainer for the project? 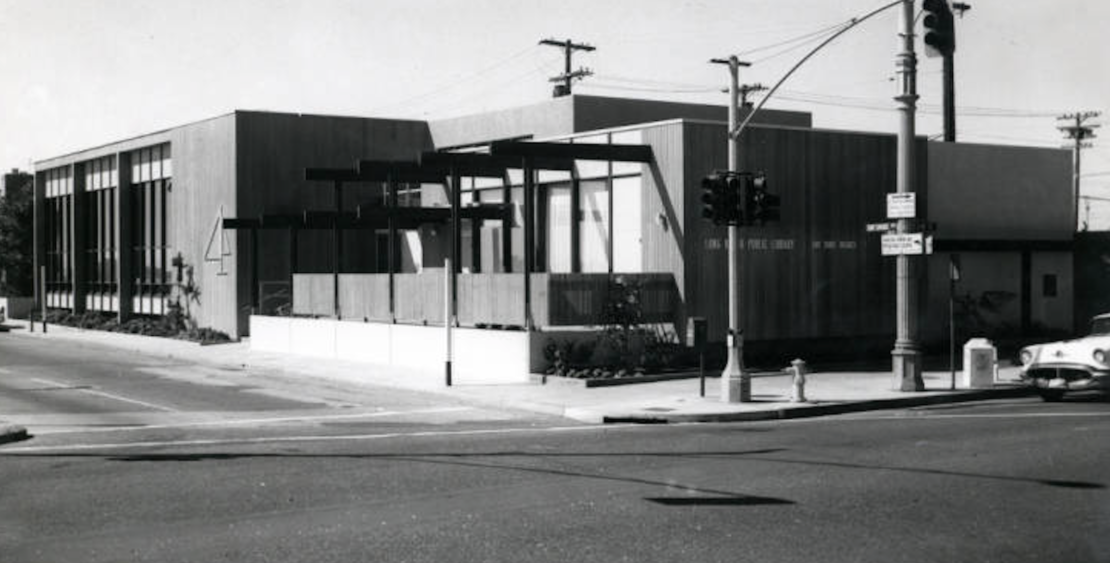 The Bay Shore Library as seen from the northeast corner of Second Street and Bay Shore Avenue in Belmont Shore in 1960. Courtesy of the Long Beach Public Library.

“I don’t know if [a restoration of the original design] was considered from the get-go,” Price said. “I just wanted a refresher… I had never made the request to specifically focus on some form of historical preservation. I don’t recall the discussion ever revolving around the idea that we were to restore it in its present condition.”

With calls from across the city with various architects, particularly including Bohn, Price now does admit that the mid-century modern character of the building is “important” and when Bohn explained the nature of the design, “it was obvious and great if we could do something period-specific.”

With the project already out to bid and responses due back to the city by Oct. 5, Price has a small window to hear out pathways from architectural professionals that focus on restoration rather renovation. That exploration will begin with Bohn, who has offered his services pro bono and plans to introduce his ideas in the coming week with Price.

“We can go ahead and get a bid from a design firm,” Price said. “But I do want to explore the opportunity to make facade improvements to this building that are consistent with the mid-century modern aesthetic. It’s not my area of expertise but I have heard the professionals out—and I do love the history of that architectural period. To the extent that we could do a facade improvement that honored that period, despite not being a designated historic landmark, I would favor us doing so.”