Sterling Steffen, who owns Trademark Brewing with his wife Ilana, has had little chance to allow the community to support them. The massive, quarter-million-cubic-foot space—a former auto body space that they transformed into a brewery with their life savings—has sat empty since the pandemic, relying solely on selling cans of beer and marketing through social media.

It’s been more than 170 days since breweries were shut down and Trademark is one of the many throughout the county that has felt the economic effects of the pandemic, unfairly, they say, by being lumped in with bars and bar culture.

“I keep hearing about the ‘lean-in factor,’ when people drink too much, they tend to lean in, not follow the rules,” Steffen said. “If you want restaurants to stay open because you claim nourishment and you don’t want the possible negative behaviors associated with alcohol consumption, then make this an alcohol thing. But making it a type-of-alcohol thing or where-is-the-alcohol thing is where the huge disconnect comes in.” 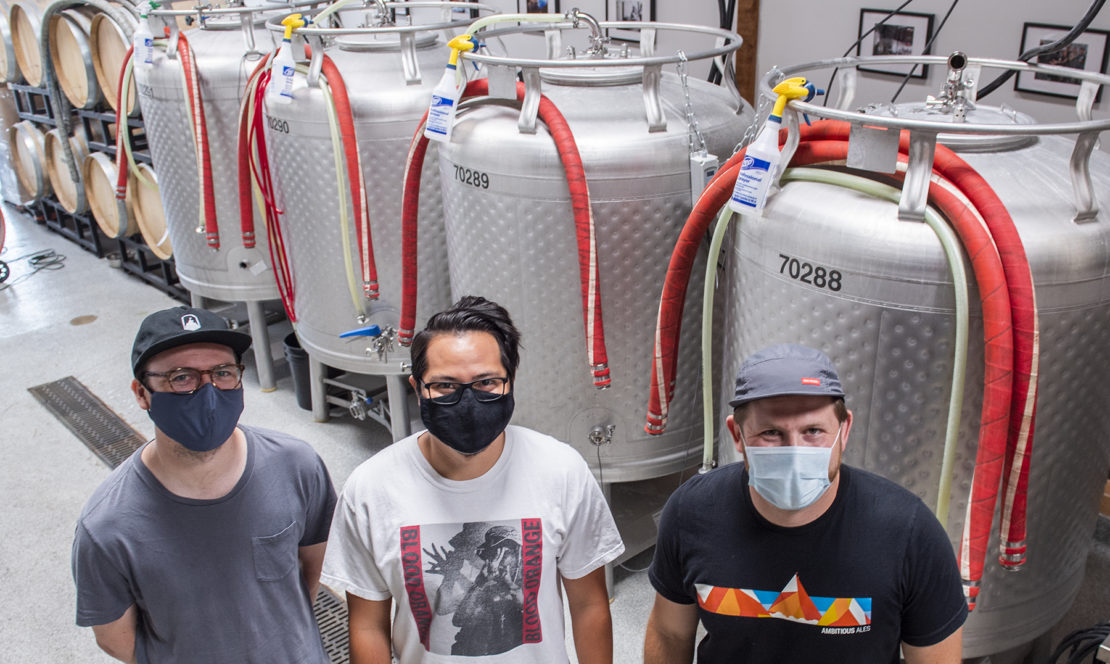 Health officials from Director Kelly Colopy of the city’s Health and Human Services to state officials have said that spaces which serve only alcohol often operate with larger crowds of people who remove masks more frequently to drink and, in the words of Colopy, tend to lean in and become more intimate, increasing the chances for infection and spread. But brewery owners say to lump them in with that is unfair.

“We’re more comparable to wineries than we are bars,” said Ambitious Ales co-owner Garrett Carroll. “We produce our own product on site. A lot of us do that because it’s our focus and our passion, that’s why we didn’t open up a kitchen on our property and wanted to focus on a specialty. We’re not restaurateurs, we’re beer makers that want to create an experience. And we’re collaborators.”

One of the newest collaborations is the Los Angeles County Brewers’ Guild, a 90-plus brewery member organization that has begun an effort to showcase that they are not only responsible operators but, unlike bars who have led a separate effort to reopen, they are family-oriented spaces where the commonality of creating beer and a safe place to visit is centric. Like the local bar scene that formed a coalition, Los Angeles County breweries are gathering resources to not only educate about what they need, but what they are. 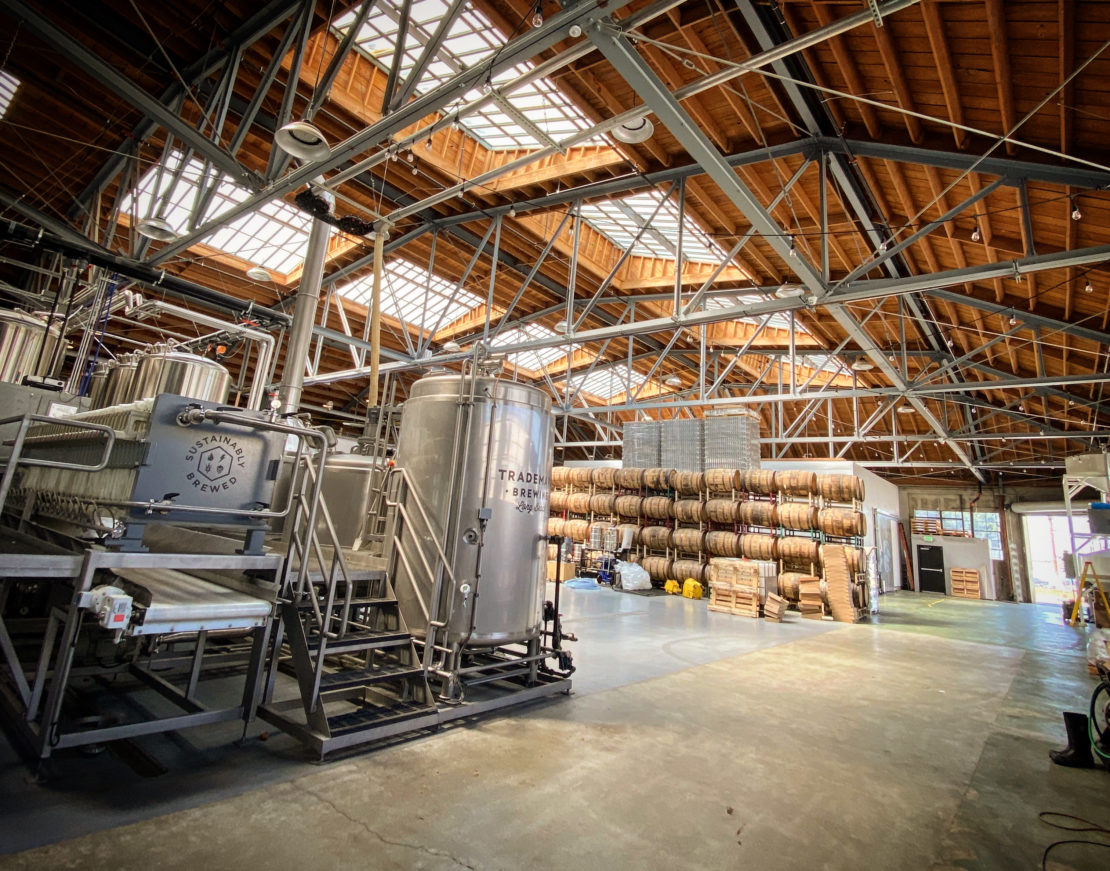 Trademark Brewery sits on the Anaheim Corridor after transforming a former auto shop into a brewing space. As seen on Sept. 4, 2020. Photo by Brian Addison.

“There seems to be some puritanical vision of what a brewery or taproom looks like,” said Frances Lopez, executive director of the guild. “It’s like they think of us as some rom-com where we’re all huddled in this cute little taproom, packed together, but most of our breweries are big, open spaces. Plus, our culture is odd and specific; yes, we are a place where people gather as a community but for the most part, aligning us with nightlife in general, it makes me laugh. The average brewery closes at 10 p.m. and that’s on a weekend night. Less than 5% of our members are open until midnight and the vast majority of them are brewpubs with full kitchens.”

Indeed, trying to operate a brewery safely is a tricky business in LA County. So much so that many point to Orange County, where breweries follow a state order mandate that requires them to pair with a third-party food vendor has allowed breweries to not only balance themselves financially but also showcased how breweries can provide safe, reasonable social spaces during the pandemic. However, a county can choose to be more strict than the state order, and Los Angeles County is: Breweries are not permitted to partner with third-party food vendors and are essentially treated the same as bars and clubs.

“At this point, we are dealing with the strictest mandate in the state,” Lopez said. “And the only thing we need is for [our county supervisors] to remove breweries from that exemption. Allow us to work with food vendors. There are so many reasonable, safe opportunities, we can even begin partnering with restaurants who maybe don’t have outdoor space, and right there, you can help two businesses possibly stay alive.” 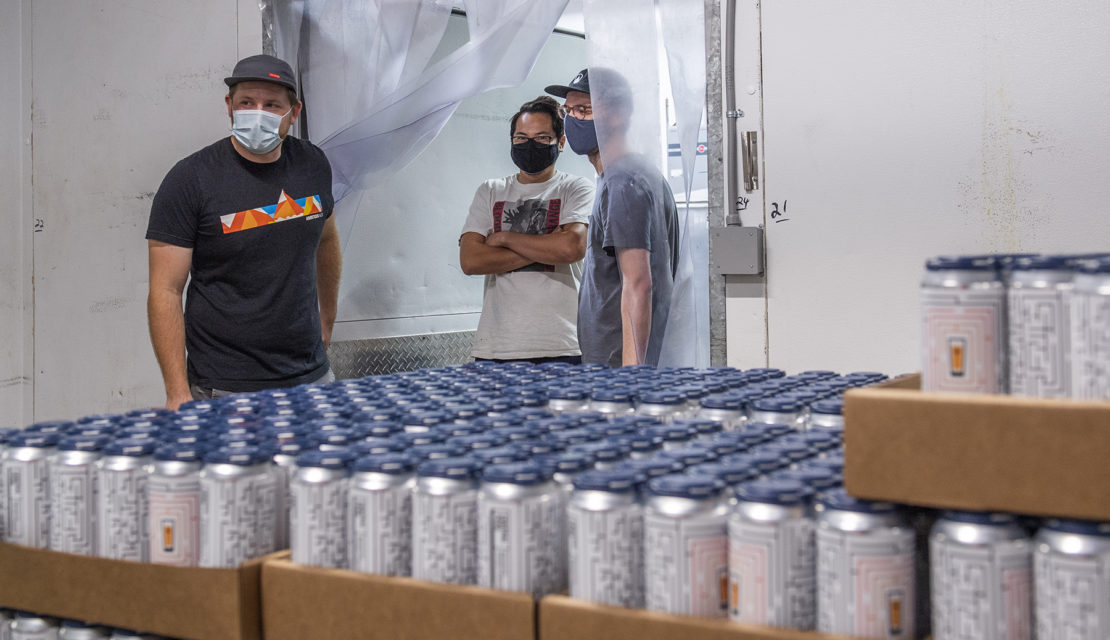 As the industry dives into month seven of the pandemic, Lopez admits that questions have been raised as to why this action is being taken now. After all, letters to county supervisors and Instagram campaigns might be viewed as last-minute rather than strategic.

“We really wanted to be respectful of the pretty significant spike in cases at the end of June—basically the repercussions right after Memorial Day,” Lopez said. “We knew that if we had gone for this right away, the optics of it from an industry standpoint wouldn’t be sympathetic. We wanted to give enough time to see what the trends were like, where the world was at. Even more, we ourselves have to regulate one another: One bad brewery with bad behavior could ruin our chances to ever reopen. We wanted to show people we were in solidarity with the mandates.”

Carroll and the Ambitious crew echo this and, even more, state that email chains have been going on for months between brewers and county supervisors, often led by the guild. 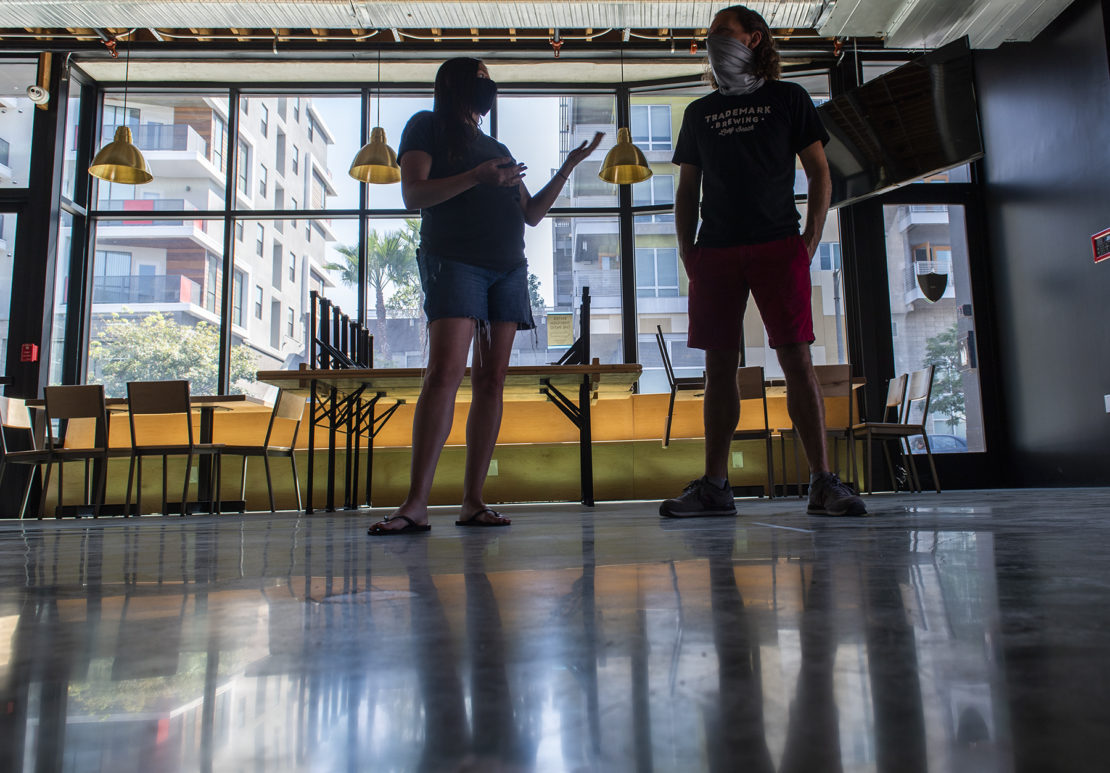 Sterling and Ilana Steffan stand in an empty taproom while at their brewery Trademark Brewing in Long Beach Friday, September 4, 2020. Photo by Thomas R. Cordova.

“It might seem as if this just sprung to life but, in all honesty, these conversations have been going on for months, internally,” Carroll said. “And given that we have made little movement forward with these private conversations, I think Frances and the whole guild agrees that this is the time to really push forward.”

Ambitious, Trademark, other breweries, and the guild ultimately want one thing: The chance to prove they can operate safely as it introduces people to beers that maybe they haven’t had the chance to sample. Ambitious, for example, often led educational tasters that go into depth about how a beer was made, what gives it its flavor profile, and other tidbits of beer knowledge that ultimately hone a customer’s loyalty.

Ultimately, it’s about reconnecting the family of beer lovers.

“We are family,” Lopez said. “We are responsible operators.”