'It's been a nightmare:' With a limited talent pool constantly in flux, restaurants play the adapting game • the Hi-lo
- ADVERTISEMENT -

When Lupe’s first opened in February, three weeks before Long Beach’s stay-at-home orders were issued, it was one of the most celebrated openings in the Downtown area in some time. Chef Jason Witzl, riding high from his Italian restaurant Ellie’s being named the best restaurant in the city, was taking over a massive space that had previously been home to an eatery that closed after only a year of operations.

Upon opening, Witzl had more than 30 people working in his kitchen, four focused solely on creating the restaurant’s signature blue corn tortillas.

Today, Witzl has four people in total working at Lupe’s and another four at Ellie’s Deli, Witzl’s casual sandwich spot in Alamitos Beach. The result? A lack of consistency frustrating to both Witzl and his patrons.

“The question customers have about a lack of consistency during the pandemic is a great question, and it has also been an extremely difficult issue for us to solve,” Witzl said. “[Normally] I wouldn’t even put someone with two to three years of experience on my salad line. Now I am putting people in the kitchen who have never once professionally cooked. I am literally training them.” 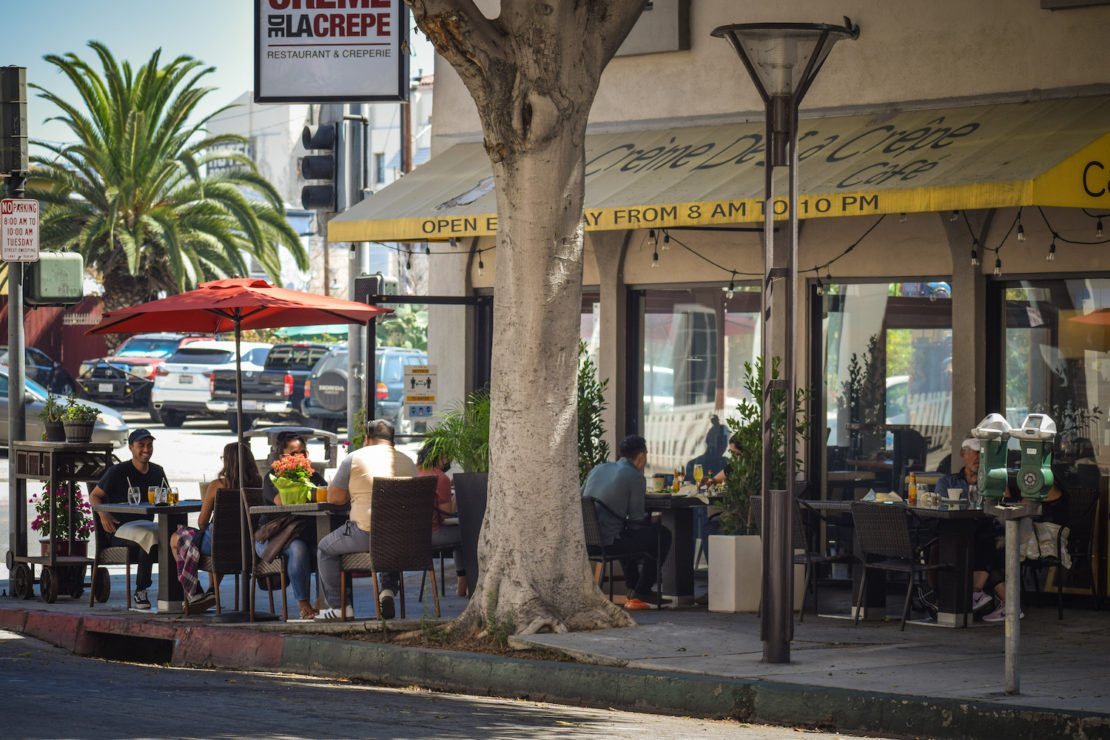 The issue of staffing is multi-faceted when it comes to a qualified talent pool available in Southern California. Many line cooks, sous chefs, pastry chefs and seasoned kitchen vets were either furloughed or laid off as the pandemic began to take its first big bites out of the restaurant industry. Many, if not most had to use unemployment payments as a way to get by.

As the state began to reopen, clumsily many restauranteurs will tell you—”With legislation constantly shifting, it’s really impossible to form a solid game plan,” said Otosan owner Jae Woo, who just opened her restaurant weeks ago—those workers were faced with the option of returning to work and risking being exposed to COVID-19 while dealing with sometimes unruly customers, likely for less money than unemployment. Because of that, many cooks and servers have opted to work under 20 hours a week, to limit their exposure and still be eligible to collect unemployment. Having fewer experienced personnel on-site has led to shift hour fluctuations that have made consistency difficult.

“On top of that, the back of the house is definitely tougher when it comes to staffing—always has been,” said Dana Tanner of Restauration. “It’s not just now. Long Beach had gone through a major back of house drought before the pandemic and I am pretty sure any kitchen or chef can attest to that. This just adds to the struggle.”

Though most restaurants have struggled with staff shortages, how they have struggled is unique to each restaurant’s particular ecosystem. For some, it’s a matter of the front-of-house more than kitchen staff.

“Everything about staff and product shortages is real,” said George Mlouk, owner of Nico’s in Naples. “I’ve been lucky to have a kitchen staff with me for 20 years, so I have little issues in the back of house. For me, my struggles have been with people who work as a host or servers. Now that they’re on unemployment after the shutdown, they’re enjoying money they would have had to make otherwise working. That’s the shortage I am experiencing.”

For some, a matter of loyalty comes into play as staff have begun to trickle back in as unemployment becomes less financially viable.

“It’s been beyond hard getting staff,” said Chef Thomas Ortega of the Amor Familia group, a trio of well-respected Mexican restaurants in the Long Beach area. “Most who could collect unemployment didn’t want to come back until more recently because they could lose that money now—but I didn’t bring any of ’em back. If they couldn’t help out when we needed them the most, I’m not going to all of a sudden cater to their needs now that they aren’t getting an extra $600 weekly.”

For some, it is political.

“Today is the 232nd day of 2020; we [at Gladstone’s] have been closed 143,” said Gladstone’s owner John Sangmeister in a post on Facebook. “Our team at Gladstone’s at high season numbers 140 associates. Many have been with us over a decade with an average tenure over seven years. 140 families have blown up by the randomness of political decisions.”

And for others, there is simply no option but to run with the crew they have.

“Giuseppe [Musso, chef at Michael’s Downtown] simply won’t work with people not experienced in kitchens,” owner Carl Dene said. “We have a unique situation though: With Chianina [the restaurant group’s steakhouse in Naples], we have that staff able to come to Downtown. Every restaurant seems to have its own challenges, their own struggles.” 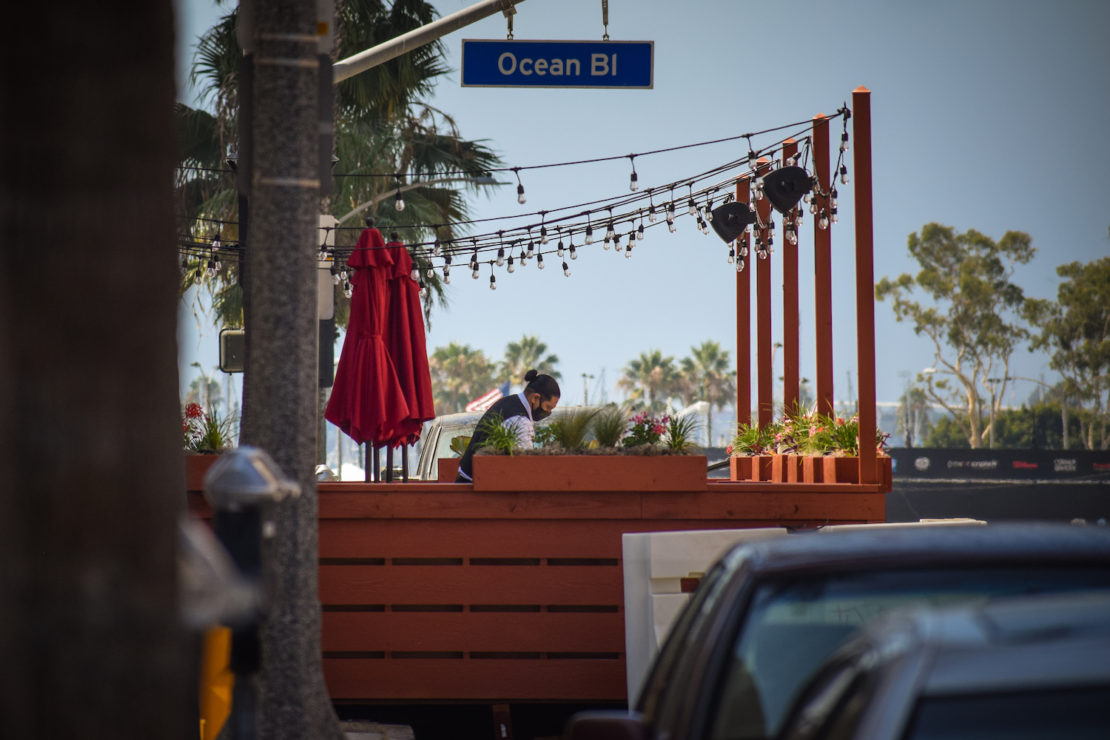 Staffing challenges can be compounded by another struggle: ingredient sourcing. With massive layoffs at distributors across the nation, deliveries have been shortened or cut all together. This has result? A nationwide shift in food sourcing.

Julian Shrago, master brewer and co-owner of Beachwood, noted that with restaurants not ordering kegs, distribution nationwide has shriveled, meaning less fresh beer to go around, a circumstance applicable to many other commodities—like coffee.

“I don’t fault any of our suppliers, they’re dealing with it just like we are,” said Bobby Hernandez, owner of Recreational Coffee in Downtown Long Beach. “But we definitely have issues with the delivery of ingredients because of a staffing shortage from just about all of our suppliers. All our suppliers are short on employees since COVID-19 hit and have moved their deliveries from two times a week to just once a week, which creates issues for us because of our lack of ability to hold a week’s worth of groceries in our fridges due to a lack of space. It’s definitely the trickle-down effect that stems from employment issues from the supply chain.”