If you could bookend your day with two things, would those two things be coffee and wine? I think for a lot of people the answer would be yes. One is a rocket that gives you the energy to blast off, while the other is a parachute to gently bring you back down to Earth.

About six months ago those two necessities of life merged when Brandee Raygoza, 27, and her partner Derrick Montiel, 27, opened Sala Coffee & Wine Bar in Bixby Knolls in the space formerly occupied by Mixx Kitchen.

It’s the second location for the duo; the first was launched three years ago in Whittier in a house that had been converted into a retail space that already had the licensing in place to carry wine, so what began as a coffee bar naturally turned into a little natural wine shop as well.

“We never really saw ourselves opening up a wine shop necessarily, it was kind of like a pipe dream,” says Raygoza as she tells me the story of how Sala came to be. “We started out doing coffee pop-ups about five years ago, and we saved up enough money to open up a brick-and-mortar.”

The building that they leased in Whittier was a former deli and corner store that was once a house, she explained. She and her partner Montiel liked to host people for coffee in the morning, or wine in the afternoon, so when they found themselves opening a coffee and wine shop in a former home it seemed only fitting to call the business Sala (the Spanish word for living room.)

“We were only open a few months when the pandemic hit,” she says, explaining that for a while in the early days of the first wave of the pandemic shutdown they didn’t know if they were going to make it, but they did notice that while cups of coffee weren’t selling, bags of coffee and bottles wine were flying off the shelves. “We decided to invest all we had into wine inventory and it took off. We went from having seven to 10 skews [of wine] to 200 and we did really well.”

Four months into the pandemic, with their new business booming, there was an accident and a car crashed into their little shop. To add to the stress, their landlord told them that the building was being sold, so they set out looking for a new location to start over. It wasn’t until after they signed the lease in Bixby Knolls that their landlord told them the building wasn’t being sold, so they decided to keep both locations.

The Long Beach Sala location is bright and airy, with funky music playing softly in the background. Refreshing light and decor—succulent green colors against earth tones, with pops of wine-inspired pink neon—draws visitors in. 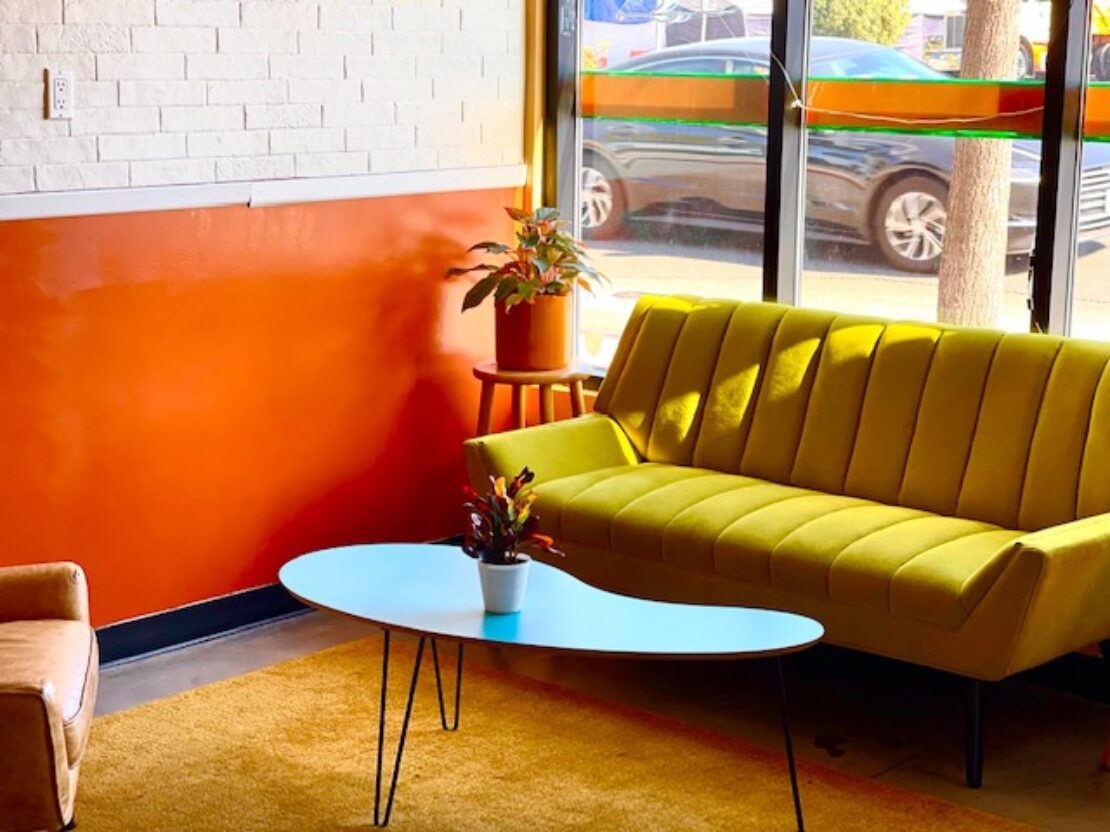 A small lounge area in the front window with a sofa and chair offers a welcoming spot to sip coffee or a glass of natural wine with a book, or a conversation. The rest of the room is filled with small tables that are perfect for spreading out and enjoying the vibe.

Much like the first location had a beer and wine license that they hadn’t bargained for, this new location comes with a full kitchen—and using it next on the list.

They’ve just hired a chef and are planning the menus this week, starting with brunch, followed by afternoon “wine bites,” and then rolling into a dinner menu down the line. The goal is to offer a menu that will pair well with their unique coffees and amazing selection of natural wines (wines that haven’t undergone any manipulation, where the winemaker just lets nature do what it does).

They’re also planning a wine and coffee subscription where once a month you can pick up a funky wine and a bag of coffee from one of their rotating roasters. The details are still in the works, but keep tuned to their Instagram: @salacoffeeandwine.