In 1765 a Parisian tavern owner named Monsieur Boulanger hung a sign outside of his tavern that read: “Boulanger vends les resturants magiques.”

This was the second sign. The first sign was advertising his special sheep’s feet in white sauce as a “restorative soup.” He had found a loophole in the rules regarding who could serve prepared food because, at the time, one went to an inn for prepared foods, not a tavern. But he claimed his soup wasn’t just food, it was medicinal and could restore health.

This is interesting for a couple of reasons, the first being that he was advertising sheep’s feet in white sauce as restorative, not revolting, “restore” being the root of the word “restaurant.” And as a result, people came to his restorative tavern for the purpose of eating his food and leaving, thus creating the first restaurant.

The other interesting thing about his sign “Boulanger vends les resturants magiques” is that when directly translated into English reads: “Baker sells magic [in] restaurants.”  And that’s what’s happening at Heritage all through February, with  local bakers and chefs coming together in one restaurant to make magic.

Every Saturday in February  Heritage’s Chef Philip Pretty will be collaborating with a local chef and baker to create a five-course tasting menu. Menus will be released the Tuesday prior. Reservations are available through Heritage’s website, on Open Table, or over the phone. Tickets will be $100 per person, with VIP bar seating, which includes wine pairing and a front-row view of the kitchen, for $150 per person. Limited seating is available. Dinner begins at 6 p.m. 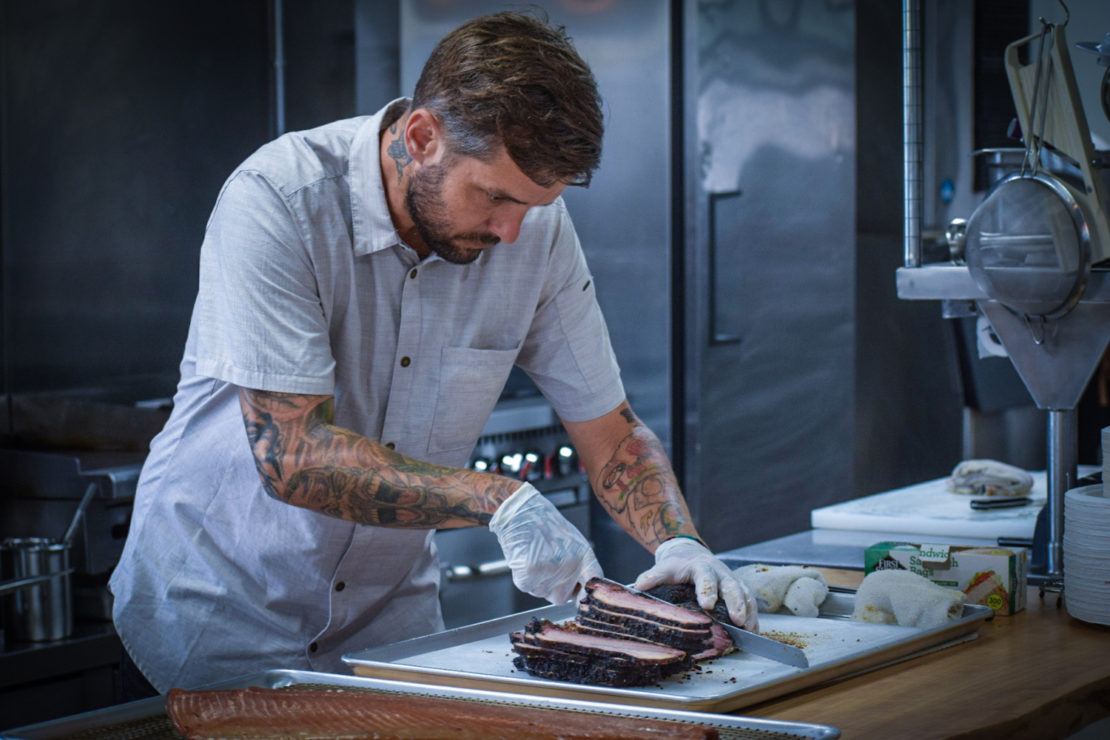 The idea to put restaurant chefs and bakers together, who he felt might not ever cross paths if they weren’t in this sort of situation, was something Chef Philip Pretty had wanted to do since last summer, but the timing was never right. But now, it’s all coming together in a prix fixe dinner series that is sure to blow your mind.

“One week prior [to the event] each menu is finalized,” Chef Pretty explained, so you’ll have to watch their social media to see what the menu will be from one week to the next.

The prix fixe five-course dinner will be a tag-team effort, where Chef Pretty and his Heritage crew, his guest chefs, and guest bakers, will each have a course that they are responsible for putting out, not unlike a competitive meal on “Top Chef.”

Chef Pretty explains that “each weekend [there] will be 30 [diners], each chef will be in the dining room explaining their course, and each baker will be explaining their bread and pastry course, so the guest will be interacting with the people cooking.”

And like a judge on “Top Chef,” the diner has no control over what they are eating. Chef Pretty explained the rules during our conversation: There will be no substitutions, no accommodations, and no food restrictions honored. If you have food allergies, it may be best to skip it. Otherwise, you are in for a gastronomical experience you won’t soon forget.

Chef Pretty also tells me that they get 95% of their produce direct from the farmers at the Santa Monica Farmers Market. They serve beef and veal from Santa Carota. The duck is from California, and dry-aged in-house; the shrimp and diver scallops are from Baja California. And the cheese comes from Oh La Vache on Fourth Street. The magic comes from the best ingredients, and when you start with the best all a skilled chef needs to do is add the sizzle.

And to add to the greatness of this event, 10% of the sales from each dinner will be donated to St. Jude Childhood Cancer Research Hospital.

Editor’s note: A reference in an earlier version of this story that described some who may not want to participate in the event has been deleted.