'Like a cosmic pull to return to my roots': Son of Papadakis Taverna owner to open new East Village cafe • the Hi-lo
- ADVERTISEMENT -

Evan Papadakis spent years as a social worker before a car accident in 2019 changed his life.

He was in the intensive care unit at Harbor-UCLA Medical Center for 12 days, and when he was discharged, spent the rest of the year on his couch, unable to work.

“I sunk into a deep depression and wasn’t grateful for surviving the accident, or the life I was left with,” Papadakis said.

When he was able to go back to work, he realized he no longer had the bandwidth for full-time counseling with patients who were suffering from anxiety, depression and trauma.

At the time, his office happened to be situated above The Cove Cafe, a popular spot in Palos Verdes Estates, and he befriended the chef, Jessie Franco.

He got to thinking about his family’s extensive roots in the restaurant business: His uncle, John Papadakis, and his dad, Tom Papadakis, opened and ran the renowned Papadakis Taverna on Sixth Street in San Pedro for nearly 40 years.

“I only knew life with the restaurant until we closed in 2010 when I was in college,” said Papadakis.

In elementary school, he peeled carrots and potatoes. In middle school, he washed dishes. In high school, he cooked, bussed tables and served. In college, he helped manage the Greek restaurant, a hub of food and entertainment known throughout the region, when his dad and uncle were away.

Now he and Franco plan to open their own restaurant concept in Long Beach, an East Village cafe called Zuzu’s Petals, formerly occupied by Steamed, which closed in 2020.

The name of the restaurant comes from the 1946 classic “It’s a Wonderful Life” in which the main character, George Bailey (played by Jimmy Stewart), on the verge of suicide, is reminded of the meaning of his life after pulling from his pocket the petals from a flower his daughter had given him.

Papadakis said when he connected with co-owner Franco, he began feeling as if a weight had lifted. His sense of gratitude began to shift and he started feeling like he’d gotten his life back.

“Jimmy Stewart needed to live out a nightmare to realize he was grateful for what he had, [and] Zuzu’s Petals represent the life he’s grateful for,” Papadakis said, explaining that the decision felt right, “like a cosmic pull to return to my roots.” 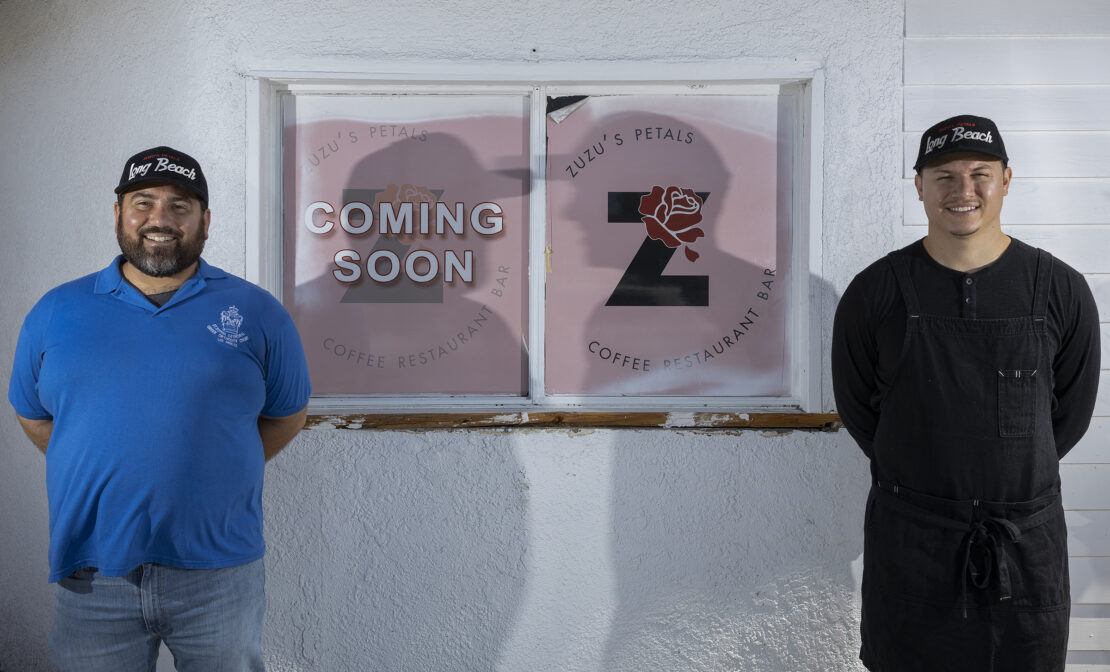 While Papadakis still does some work in the field, he has largely shifted his focus to opening the restaurant where he will be able to serve food and banter with customers, and Franco can focus on developing the menu.

With plans to open around Labor Day, the duo at Zuzu’s Petals will be offering a casual breakfast and lunch concept with walk-up counter service and patio garden seating, serving small-batch coffee, fresh pastries and a brunch menu full of organic, seasonal offerings from the local farmers market.

Breakfast items will include Fried chicken ‘n’ waffles ($18) with candied bacon, cinnamon creme fraiche and blueberry compote; pancakes ($15), including a mouthwatering selection of Zoe’s banana pancakes, lemon ricotta pancakes, or blueberry pancakes, served either as a single order or a pancake flight. And it’s always nice when there’s a thoughtful vegan option, which at Zuzu’s is an order of Carrot Lox ($14) with vegan cream cheese, pickled red onion, cucumber, dill, mint and capers.