'She cooked from the heart:' Local Filipina chef, Janice Dig Cabaysa, dies at 39 • the Hi-lo
- ADVERTISEMENT -

If anyone crossed paths with Janice Dig Cabaysa while she was near a kitchen, it was a well-known inevitability that you weren’t saying good-bye without being fed.

Whether it was a fluffy sugared doughnut or steaming siopao or a slice of her sweet banana bread, you were having a bite—whether you liked it or not.  But you’d like it; everyone always did.

“She just cooked with passion, she cooked from the heart,” said Carissa Dintemann, a fellow chef, friend and roommate of Cabaysa. “Everything that she did was thoughtful. She always had the people she was feeding in mind. She just wanted to make sure everyone was fed, everyone was happy.”

Cabaysa was doing what she always did Wednesday night when she collapsed suddenly, while working her shift at Downtown Los Angeles Filipino restaurant, Petite Peso, according to friends. She died before making it to the hospital. She was 39.

Close friends to Cabaysa said she had been living with cardiomyopathy, a heart disease she had developed in her youth. Friends and family are waiting on an autopsy report to confirm the cause of death.

Hundreds of messages, posts and comments from the Long Beach culinary community began flooding the internet after word of her death spread. Some spoke of her creative ingenuity as a Filipino-fusion chef. Others remembered her encouraging words of support to start their own food ventures. Most expressed grief of losing a dear friend.

“The level of outpour of love for this woman is amazing,” Dintemann said. “I don’t think she ever realized what her impact and what her reach was to people.”

Cabaysa was a Long Beach-er through and through. Born at Memorial Hospital, she grew up in West Long Beach at her family home her mother still lives in off Willow Street and Santa Fe Avenue.

She developed a fascination with cooking at a young age. It might have been an innate interest, or perhaps a side effect of growing up in her parent’s doughnut shop, surrounded by the heady scent of sugary flour. Probably both.

As an aspiring chef, Cabaysa wanted to challenge herself and appreciated the rewards of hard work. In her early twenties she enrolled at the Le Cordon Bleu in Pasadena, where she devoted all her energy into studying every facet of the discipline. She fell in love with classic French cuisine, her boyfriend and fellow chef, Sarunthy “Bo” Lach said, and was captivated by the European country’s traditions to meticulous preparation, careful presentation, and fidelity to quality ingredients.

Her hard work paid off, and shortly after graduation began working for the Wolfgang Puck Fine Dining Group, first in Los Angeles restaurants, then in Las Vegas where she shone as a line cook for most of her six years with the company. Her dependability and versatility awarded her traveling opportunities to cater with the company at high-profile events in Florida and Colorado.

But the particular grind of Vegas and the, at times, toxic work culture—at this point, a well-known criticism of professional kitchens—took its toll and Cabaysa did some soul-searching. She knew it was time to come back home.

“When she came back to Long Beach, that’s when she understood where her heart was. And she was like, ‘I want to do Filipino food.’ I want to elevate and show that my cuisine can be something more than just street food or communal style,” Lach said. “She really just wanted to expose everybody to what her culture meant to her.”

As Bebot’s Chef de Cuisine, Cabaysa was a force in the kitchen— sharp, focused, tenacious—but governed with kindness and empathy. Her approach fostered a familial feeling within the kitchen, one that linked her and her fellow colleagues—Dintemann, Lach, Fama and Soshana Ybarra—inextricably.

“She was the cheerleader,” Fama said. “She was always the one that believed in all of us the most. She saw a version of us that I’m not sure we all saw yet.”

But in August 2020, just before Bebot’s one-year anniversary, the restaurant was destroyed in an accidental fire and closed, launching the team into freefall in an industry hit hard by the pandemic.

“The kitchen was home. We were there more than we were at our own homes, literally we went home to sleep. So that was definitely a sense of loss,” Dintemann said in an interview with the Long Beach Post in May.

Knowing they had something special, the group stuck together and started baking, using Cabaysa’s and Dintemann’s shared apartment as their home base and test kitchen. Cabaysa went back to her familial roots: doughnuts.

Side StrEATS: A fire destroyed their restaurant, but that didn’t stop these four chefs

But Cabaysa was always quick to correct that their pop-up, Dig the Stoop/Corner Stoop—the titles were a merger of Cabaysa’s culinary ventures and Dintemann’s own catering business, though most refer to the pop-up as The Corner Stoop—was more than just doughnuts. Which was true, the group had expanded their menu to breakfast and lunch with signature dishes that blended their respective cultures; Filipino, Cambodian, American.

But Cabaysa’s doughnuts were showstoppers: iced and decorated with an artist’s ego, with bold flavor combinations that only a confident, experienced chef would dare execute. Her strawberry, lemon-thyme and ube white chocolate with toasted marshmallow and oatmeal crumble doughnuts stood out in display cases and were greedily consumed.

“Things needed to be a bit bougie, because she was bougie,” Dintemann said, laughing. 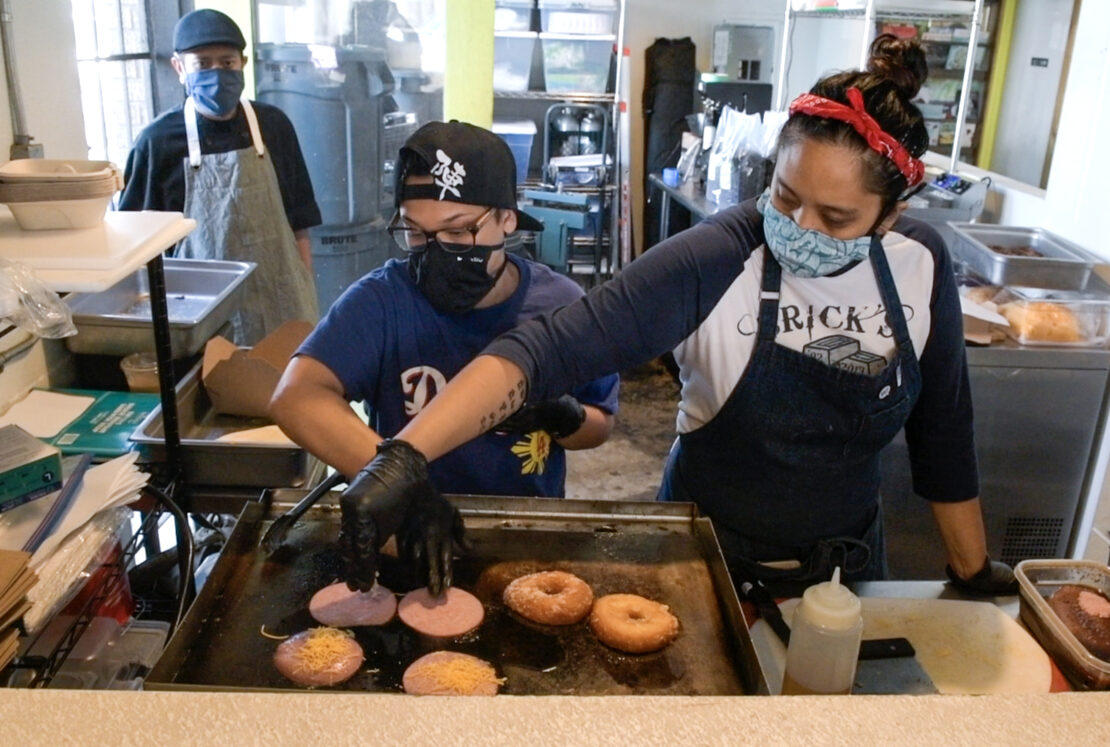 Reimagining the way people tasted and experienced Filipino food was a core mission to The Corner Stoop and Cabaysa thought endlessly of how to achieve this. Before her passing, she was only two weeks away from revealing one of her most ambitious menus yet, a fine dining Filipino brunch service at Lacquered on Broadway.

“She was so excited, so proud,” Dintemann said.

Those who knew Cabaysa were all touched by her generosity and devotion to uplifting and supporting her communities. Whenever the chef had any bake sale, cook-out, or extravagant home-cooked meal—of which there were many—Lach said Cabaysa would deliver plates to her older brother and his two daughters in Laguna Beach with more frequency during the pandemic.

“She just wanted to make sure that people had comfort while the world was falling apart,” he said.

In April Cabaysa organized a multi-vendor food pop-up at St. Lucy Catholic Church to help raise money for Asian organizations amid a recent increase of anti-Asian hate crimes in other parts of the country.

“I decided to do a pop-up because I need to cook my way out of this depression,” Cabaysa told the Long Beach Post during the event.

Despite the health issues that often left her feeling exhausted, Cabaysa was always on the move.

“We didn’t have downtime, our downtime was talking about what we’re going to do next. No joke,” Dintemann said, adding that they both shared a deep passion and intensity to accomplish their dreams. “We would joke around, like, ‘we’re building our empire, we’re gonna take over the world.’”

Dintemann and Lach said they plan to host her final, fine dining menu in her honor in the near future. Though, they know they’ve got their work cut out for them.

“It’s a super difficult menu. She was really gonna challenge herself,” Dintemann said.

Dintemann also intends to carry on Cabaysa’s legacy with a business venture in Arizona, that will include a grab-n-go bakery with all of the chef’s staple recipes, the ones Dintemann said, she was really proud of, such as the banana bread and corn cookie.

A virtual rosary commemorating the chef will be held Friday, Sept. 24 at 6 p.m. PST. Click here for more information.

Cabaysa is survived by her mother, father, brother and two nieces.